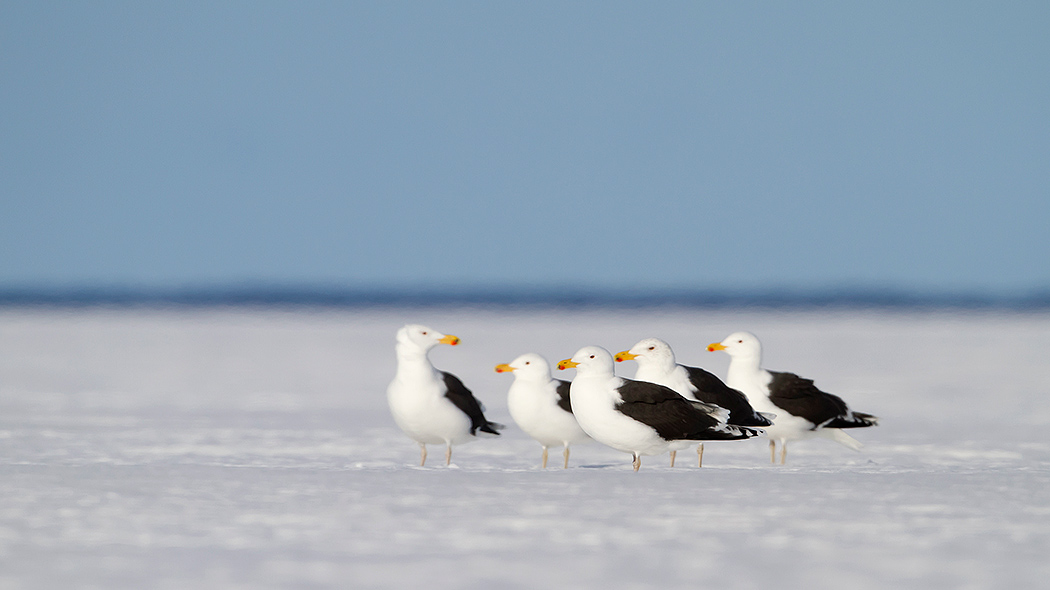 Winter is a quiet season in the Liminka Bay area. In good vole years, you may spot vole eaters, such as the northern hawk owl and the great grey owl.

During exceptionally mild periods of winter, you may see flocks of gulls flying close to the holes made in the ice of Lumijoenselkä by fishermen. These flocks can also include arctic glaucous gulls.

The first part of March is usually very wintery in the Liminka Bay area and the only sign of the approaching spring is the increased singing of stationary birds. The first migratory birds are expected to arrive after mid-March. When rooks, for example, gather in their nesting communities, greylag geese arrive on the icy bay and reserve their nesting places, and Eurasian skylarks and snow buntings can be spotted on the first snow-free patches of land.

Spring arrives in April, but the conditions are still wintery, which may stop the migration for a long period of time. A proper spring starts when the shores become free of ice by the end of April. The first unfrozen spots are usually located by the mouth of River Lumijoki, in front of the Virkkula birdwatching tower, and by the mouth of River Temmesjoki. In April, the most spectacular event is, definitely, the spring migration of bean geese. The number of these geese is usually highest between the 20th-25th April. Geese chiefly feed on fields, but they like to spend the night in water. So when the ice on the river mouths has melted, you will have a good chance to see geese flying to spots where they spend the night. This great display can best be seen from the Temmesjokisuu birdwatching tower.

At the turn of April and May, the migration of many larger waders, such as the Eurasian curlew and the black-tailed godwit, which is the emblem bird of the area, is also at its most hectic. It is easiest to observe black-tailed godwits right after their arrival, when their strident calls (that sound like obscenities) during the lekking display can be heard on the meadow surrounding the Virkkula birdwatching tower.

May is the most versatile month, as for the birds in the area. At the beginning of May, the migration of geese is still going on, and the flocks now have a relatively larger number of arctic pink-footed geese. Early May is also the best time to see critically endangered lesser white-fronted geese, even though, over the past few years, their main resting areas have been located outside the Liminka Bay area.

In early May, the migration of many smaller waterfowl is at its best and the bay becomes colourful thanks to the high number of male ducks. Out of the dabbling ducks, the first ones to arrive are the mallard, the Eurasian teal, the European wigeon, the northern pintail and gadwalls, the number of which is lower. The last ones to arrive are the garganey and the northern shoveller, as their trip is the longest. Outside the main migration periods, many ducks may be surprisingly low in their number: for example, there are very few European wigeons at the end of May, before the moulting males start gathering on the bay.

The flocks of migrating waders are usually largest in rainy weather or during cold spells in spring. In fine weather, the birds are busy and do not have time to rest. The first ruffs arrive at the beginning of May, but the migration is at its most active during mid-May, when you can go and watch the mighty tournaments between the cocky male ruffs. Usually the number of smaller waders increases at the end of May. The threatened Baltic dunlins start to arrive onto the seaside meadows to nest at the end of April.

The last migratory birds, which are just passing through the area, are very busy and their movements are difficult to forecast.  At the end of May, you may, sometimes, see hundreds of broad-billed sandpipers, but if the short migration period is sunny and the wind blows from the south, their migration may almost go unnoticed.

May is also the best time to see the Eurasian bittern. This mystical bird that creeps at reed beds can only rarely be seen, but its deep voice can be heard from far away during the spring.

May is also an excellent time to spot rarities. In regard to species that are sighted more regularly, the best chance to see the Montagu's harrier and the pallid harrier is right now.

The last migratory birds arrive in June. The first southern songbirds (low in numbers in this area), such as the Blyth's reed warbler and the common grasshopper warbler, do not usually arrive before the end of May. At the same time, the autumn migration of some waders may already be under way. For example, female spotted redshanks often start returning from their nesting mires in the north during the first days of June - only after a two-week stay in the nesting area! Eurasian curlews and northern lapwings may also act in the same way in their autumn migration, as early as in May.

In early June, there are still hundreds of whooper swans at the Liminka Bay that are not nesting, but about one week before Midsummer Day, they suddenly disappear. During the night (the time of darkness is very short), these young, who are not nesting, direct their bills towards the moulting areas in the Kola Peninsula. This is followed by a period of a few months, when there are very few swans at Liminka Bay, as they do not nest in the area yet. The male European wigeons also fly to their moulting areas at night, during the same period of time.

The morning concert by birds is at its best in June on coastal meadows, in seaside shrubs and in forests. In the Liminka Bay area, the loudest singers are sedge warblers, common reed buntings, willow warblers, whinchats and meadow pipits.

However, one element is missing in this concert: still in the 1990s, some yellow-breasted buntings arrived at the Liminka Bay in June.  However, this species has not been sighted in the area since 2003 and not in Finland since 2007. The fact that this species has disappeared from Finland concerns its global decline.

July is the best time to see many waders in their gala suits which nest in arctic areas. However, the Liminka Bay shores that are the best spots for seeing waders are slightly difficult to access and travelling along them endangers the young of the nesting waders. So it is advisable to go and see waders  on the north-western shore of Hailuoto Island and at River Siikajoki. When the water level is low, you can also spot arctic waders from the Virkkula birdwatching tower. In July, many nesting waders head to the areas where they spend the winter. For example, adult black-tailed godwits disappear in July and their young in August, at the latest.

In midsummer, a large number of moulting waterfowl arrive at the Liminka Bay, chiefly males that have done their share of nesting. For example, broods of greylag geese gather at Lamunkari, and the birds which have not nested or have failed in nesting fly onto the southern shores of Hailuoto Island, in order to moult. During the summer, there are hundreds of young cranes that are not nesting at Liminka Bay. Some common crane couples nest on seaside wetlands, but the nesting birds are surprisingly unnoticeable as to their behaviour.

In August, waterfowl keep gathering at the Liminka Bay. When the duck hunting begins on 20th August, most of the waterfowl pack together at the Virkkula sanctuary. Before the establishment of a sufficiently large sanctuary, practically all of the waterfowl disappeared from the Liminka Bay after the beginning of the duck hunting period. Today, there are hundreds or thousands of waterfowl in Virkkula up until October. Geese also gather in the sanctuary: first greylag geese and later bean geese, as well.

The migration of waders is also fascinating in August. As with many species, the main part of the migration is played by the young birds, which migrate later than the adult birds. The passerines at reed beds and in seaside shrubs are very busy eating insects, in order to endure the long migration to Africa or Asia. In August, migration traffic is at its busiest in Finland's airspace, but it chiefly takes place at night and passes unnoticed.

In early September, flocks of hundreds of ruffs populate the shores of Liminka Bay. In place of the spring colours, the ruffs are now young brown birds.

The large numbers of birds (and rodents) also always attract birds of prey, and the Virkkula birdwatching tower is an excellent spot to watch them in late summer and autumn.  It is a good idea to check all kinds of fence poles and other viewpoints: on these, you may see a northern harrier, a western marsh harrier, a merlin, a peregrine falcon or a white-tailed eagle.

In September-October, you may sight widely roaming birds whose occurrence is always unpredictable and makes the birdwatching excursions in autumn fascinating.  In some years, you may observe hundreds of migrating Eurasian jays, and in some other year, you may see long-tailed titmice. Sometimes you may spot a flock of pine grosbeaks and Bohemian waxwings eating berries, sometimes northern hawk owls hunting voles.

In September, the number of passerines has decreased, but it is the right time to look for eastern specialities in the flocks. One eastern speciality that has increasingly often occurred in the area over the past few years is the yellow-browed warbler, which is easy to note by its sharp call. Mid-September is the best time to spot this eastern speciality. In the Liminka Bay area, Varjakka in Lumijoki and the tip of the Oulunsalo peninsula are the best places to sight this species.

In early October, thousands of waterfowl are resting on the shore waters of Virkkula, even though the numbers are gradually decreasing. The waterfowl stay in high numbers in this area, until the bottom of the bay freezes. This water area is very shallow, so the bottom of the bay freezes after a few days below zero centigrade.  Even if the bay later melts, waterfowl do not usually return. When many other waterfowl are heading towards the south, the autumn migration of swans is only reaching its culmination. The progress of their autumn migration greatly depends on the weather: the last swans fly towards the south, only after the widest watercourses start to freeze. At Liminka Bay, you may see hundreds of swans during the autumn, but the most important gathering areas for swans are located on Hailuoto Island and on River Siikajoki.

For birds,  winter begins when the waters freeze, but there are always some swans and other waterfowl struggling in the area until Lumijoenselkä, i.e. the open stretch of water that is the last to freeze, is covered by ice. Within the flocks of common redpolls, you may spot arctic redpolls, which are usually fewer in number, or even rarer twites.