Natural Features and Sights of Näränkä

The Näränkä landscape is a tapestry of forests, hills and ravines as well as bogs and waters.

The natural forests of Näränkä belong to the boreal forest belt and, along with their healthy ecosystems, have remained in their natural state. Here and there, small deciduous woods provide diversifying variety to the composition of the forests. It is variety with its countless nuances that is most typical of these forests, some of which have never been touched by an axe.

The fact that the forests have remained in almost pristine condition has created the necessary living conditions for several demanding species living in old-growth forests. The high numbers of decayed wood offer a haven for rare beetles and shelf fungi. The incidence of birds which prefer old-growth forests is also high in the area, and all of the Finnish large boreal predators have been found in Näränkä. In addition to these, the forests are also home to, among other species, Siberian flying squirrels (Pteromys volans).

The highest hill in the area, Närängänvaara, stands 150 metres above the surrounding bogs and dominates the landscape. From the lookout spot on the top of the hill, you can see breathtaking views across the landscape, which is alive with forests, bogs, and waters.

In the Virmajoki forest area, there is a wide drumlin field with significant geological and landscape value. The interplay of bog and drumlin gives the view a striped appearance as the bog vegetation suddenly switches to firm forest soil vegetation.

The northern parts of Romevaara are split by a rupture valley, the Lomajoki ravine. This scenic ravine is also unusual as a watershed. The waters from the western edge of the ravine flow into the Iijoki River, and those from the eastern part to the Oulujoki River. 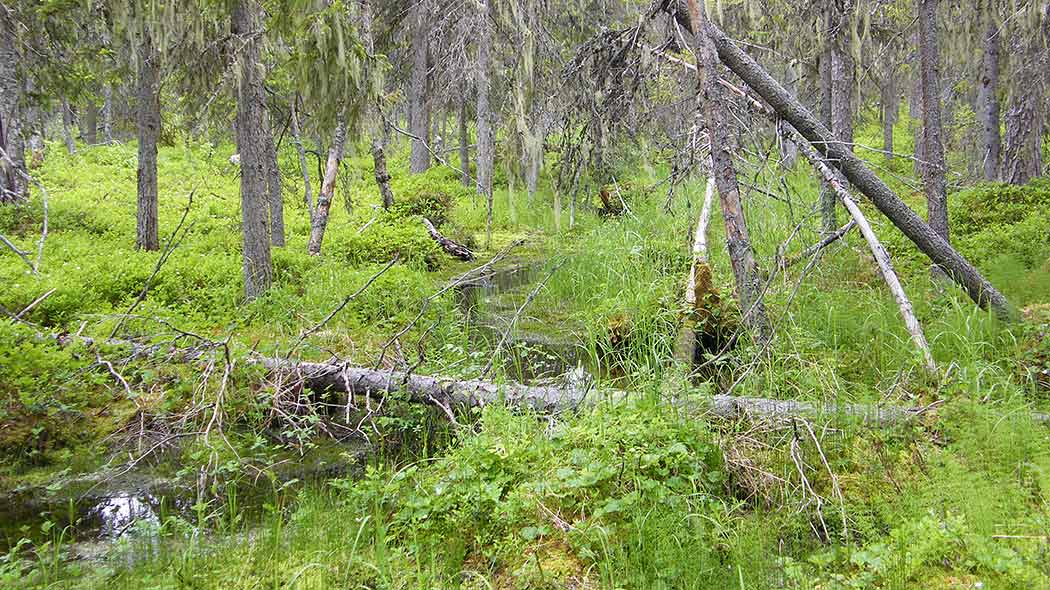 A Mosaic of Bogs and Waters

The bogs of the area are primarily low in nutrients and barren, though there are also quite a few bogs which are rich in nutrients. Almost all the bogs are in their natural state, as no ditching or other major changes in the management of water resources have been carried out. In the past, however, some bogs have been used in meadow farming by, for example, damming them up and mowing hay. Due to the terrain formations in the Kuusamo region and the humid climate, there are many hanging bogs in the area.

Unspoiled brooks and small pristine ponds and lakes are a rare sight in Finland today. Watersheds which have remained in their natural state are extremely valuable. There are, among other rarities, brooks which have been preserved with their original salmonoid populations intact in the Näränkä area.

The quiet stretches of brooks and rivers are favourable environments for different kinds of fish, and here you will find, for example, perches (Perca fluviatilis), graylings (Thymallus thymallus) and brown trout (Salmo trutta fario). A brown trout spends its entire life in the brooks and is a very local fish when it comes to its living habits.

In Ahmosensalmi Strait by Kaarronharju Ridge, an old whitefish weir dating from the 1930s is still in place. Using the weir, the fish were herded into a fyke, from which they were then collected. 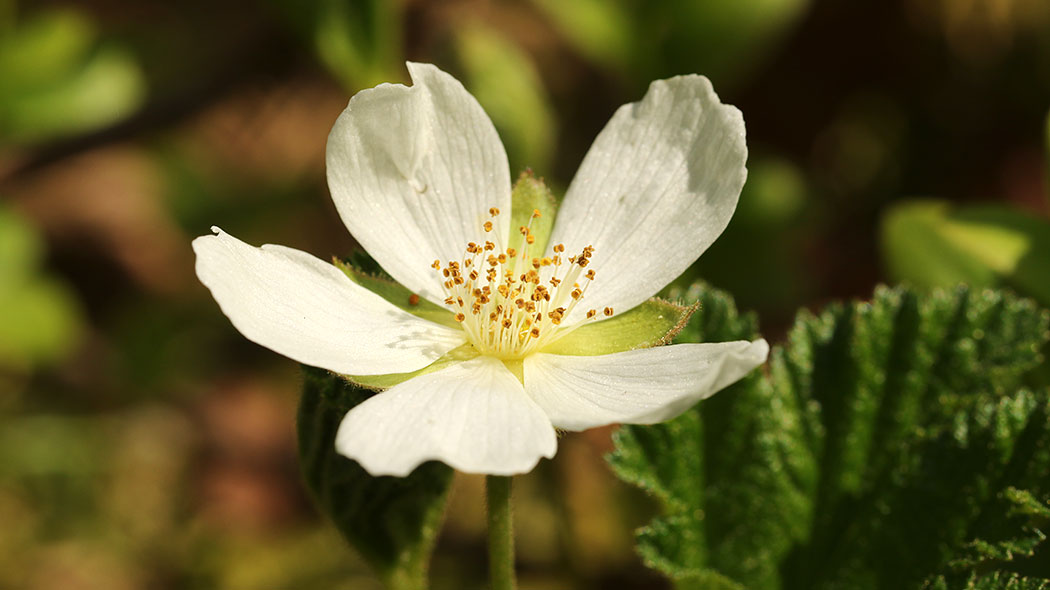 Ancient Pines Guard the Peace of the Backwoods

For historical reasons, the forests in the Näränkä area have, to date, remained almost entirely outside the reach of forestry. At some places, small-scale felling for household use has occurred, and at the turn of the century some selection felling was practiced here and there.

In addition to the fact that the forests have remained in their natural state, the advanced age of the trees is characteristic of Näränkä forests. The nearly 700-year-old pines found in connection with forest inventories are quite unique on the Finnish scale. Based on the boring results, the pine stock growing in the area is 400 to 700 years old. In addition, individual borings carried out in different parts of the area confirm that the age of the oldest tree generation is at least 400.

The forests of Näränkä have developed after forest fires through natural afforestation. The fires have left marks behind all over the area: burnt stumps and charred dead trees still standing or lying on the ground, as well as fire scars on living trees.

The bird species which prefer old-growth forests are represented in abundance in the Näränkä area. The incidence of, for example, western capercaillies (Tetrao urogallus), three-toed woodpeckers (Picoides tridactylus) and Siberian jays (Perisoreus infaustus) in the area is markedly higher than in other parts of the Kuusamo region.

Grouses such as the western capercaillie (Tetrao urogallus) dig themselves into the snow to rest either for the night or during the day between meals. A closed hole in the snow provides good cover and efficiently reduces heat loss; it also offers protection from predators. Capercaillies feed on coniferous needles, and the feeding trees can be recognized by the litter and droppings at the foot of the tree, as well as by the fact that the needles have often been visibly thinned from feeding. The willow grouse (Lagopus lagopus) is another typical bird living in semi-open terrain such as on bog land, particularly on the edges of pine mires and open bogs where tree growth is stunted.

The golden eagle (Aquila chrysaetos) is native to the Näränkä Natural Forests, and the area boasts several known nesting sites.

Evidence of Näränkä's biodiversity is presented by the many endangered and rare plant and lichen species found in the area. In the investigations conducted so far, a total of 54 species classified as highly precious have been found in the area. An additional 20 species of vascular plants, moss and lichen classified as regionally endangered within the Kuusamo region have been found here. The flora is at its richest round Näränkävaara Hill, where the ultra-alkaline bedrock provides excellent conditions for the development of diverse plant life.

As an example, the regionally near threatened arctic buttercup (Ranunculus hyperboreus), which thrives by springs or brooks, grows in the Näränkä Natural Forests area. Near Karhuviita, there are springs where the regionally endangered floppy earwort (Scapania paludosa) can be found nearby. 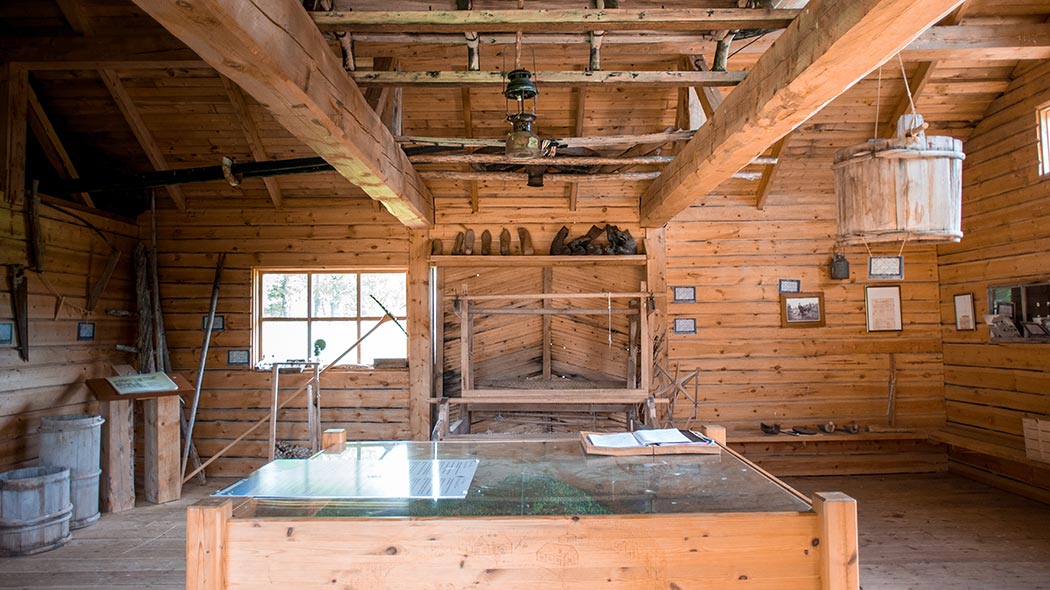 See a thousand year life of a pine (youtube.com).