The Design and Architecture of the Exhibition 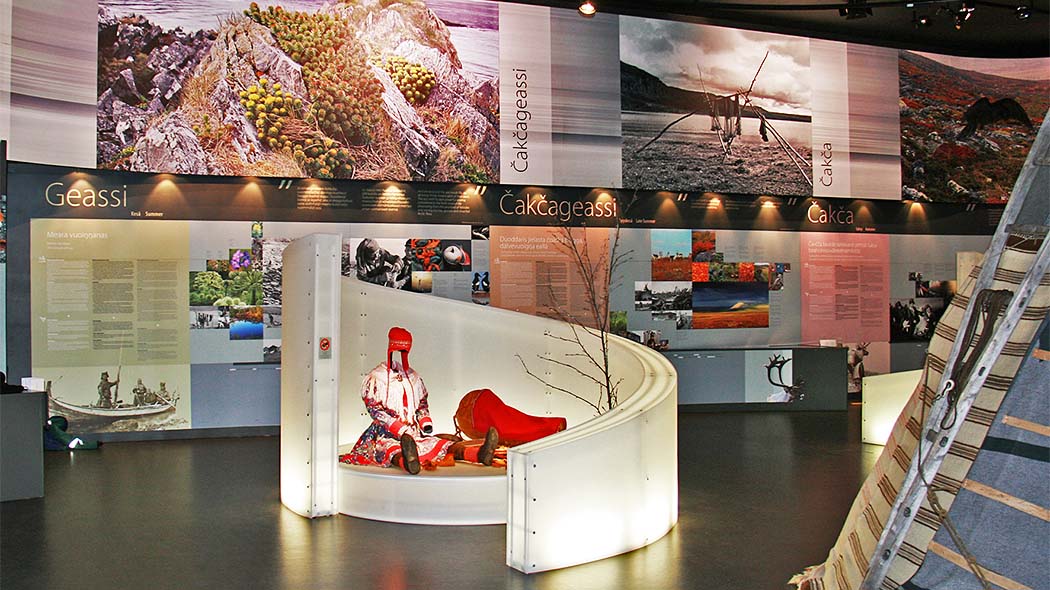 About the Design of the Exhibition

"The expansion work on Fell-Lapland Nature Centre began in 2005 and in early 2006 a group of exhibition designers gathered. To get a feel for the project the designers visited the Sámi museum at Siida, attended the Skábmagovat Film Festival, went on a tour of Finnish and Norwegian Lapland as well as stayed overnight at a reindeer herders cabin on the shore of Lake Pöyrisjärvi and went on an unforgettable sleigh ride. Attending the Marianpäivä Day event gave them further insight into today's Sámi culture.

The idea to make the exhibition space open and into organically arched 360 degree scenic panorama came from the Northern Finnish landscape The exhibition's centre pieces Kiepit are abstract representations of shapes formed by willow grouse (Lagopus lagopus) and snow. Within these centre pieces there are installations which feature locals at work. Those visiting the exhibition are the wanderers who move within the landscape, which constantly changes from one angle or viewpoint to another.

Visitors first pass through the space for changing exhibits before arriving at culture and nature exhibit which starts off from a narrow hall where the Ice Age and time of the Deer are featured. The exhibit follows the reindeer's trek in each season as they developed from the end of the Ice Age to what they are today. The large panorama at the top of the exhibition spaces' walls has massive pictures which show nature and the landscape during different seasons. The glass cases at the lower part of the walls feature the reindeer which takes the visitor from one season to the next. The glass cases contain small installations. The centre portions of the walls contain information in words and pictures on the lives of the reindeer herding Sámi and on Northern Finland's nature.

The lighting for the exhibition has been designed so that it highlights the distinct mood of each season featured in panoramic photos on the walls and brings out the arched shape of the walls and on the other hand the snow-like glow of the kiepit in the otherwise dark surfaced exhibition space. The Lapp pole tent at the centre of the exhibit is lit with soft warm light in contrast to the other lighting used in the exhibition.

The exhibition's soundscape has been created to be an abstract element, which sensitises visitors' senses. The audiovisual experience is enhanced by monitors placed within the exhibition space. The monitors' moving pictures and sounds highlight the rest of the exhibition

Northern Wanderers and 8 Seasons are visually continuations of the main exhibit space and create a contrast to the nature centre's finished wood surfaces. The Yrjö Kokko Library, which is connected to the exhibition spaces, has a cosy homelike feel to it" says the architect of the exhibition, Kari Leppänen.