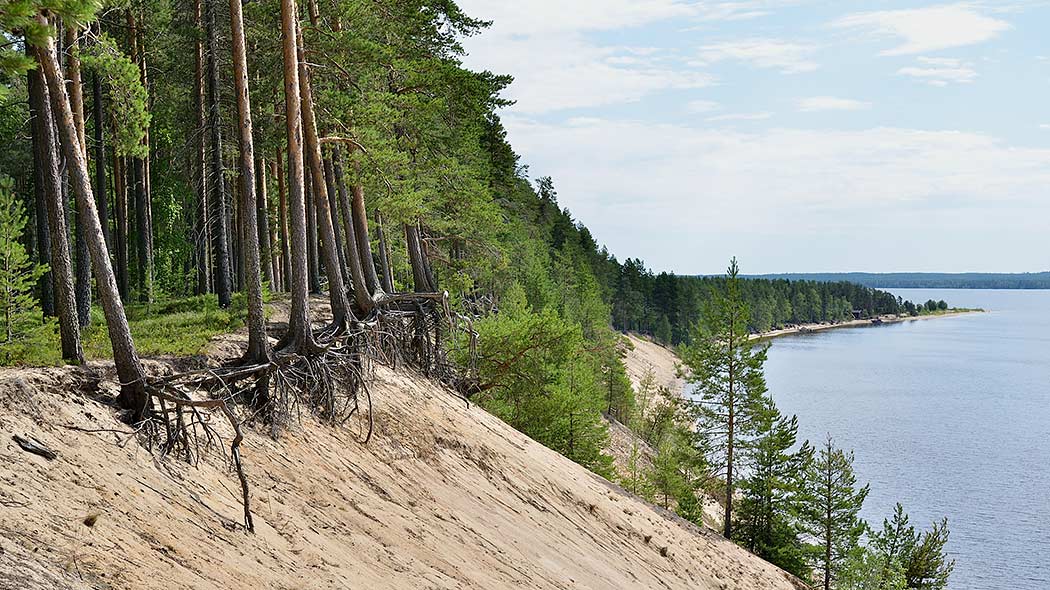 Ärjänsaari Island is located amid the vast open stretches of Lake Oulujärvi. Ärjänselkä, on the western side of the island, is the largest inland water area in Finland. The Finnish word “ärjä” stands for a windy place or a steep shore bank, which aptly describe the island.

Ärjänsaari Island, which is part of the Rokua esker range, is a very valuable esker island in terms of its geomorphology. The island is part of one of Finland’s longest esker ranges that runs from Hailuoto Island to Sotkamo and further on to Ilomantsi. Eskers were deposited by soil that was carried by a meltwater stream running under a glacier.

The Lake Oulujärvi area was released from its massive ice cover 9,100–9,400 years ago. At that time, Ancylus Lake covered the area. The beach ridges and banks of Ärjänsaari Island were created when the area lifted above the water level.

Lake Oulujärvi closed up from Ancylus Lake approximately 8,400 years ago. At that time, Ärjänsaari was still part of the mainland, forming an extension to the eastern Koutaniemi–Sivolanniemi–Kumpuniemi esker. It was only 1,300–1,400 years ago that the land connection to Kumpuniemi was cut off, making Ärjänsaari an island. 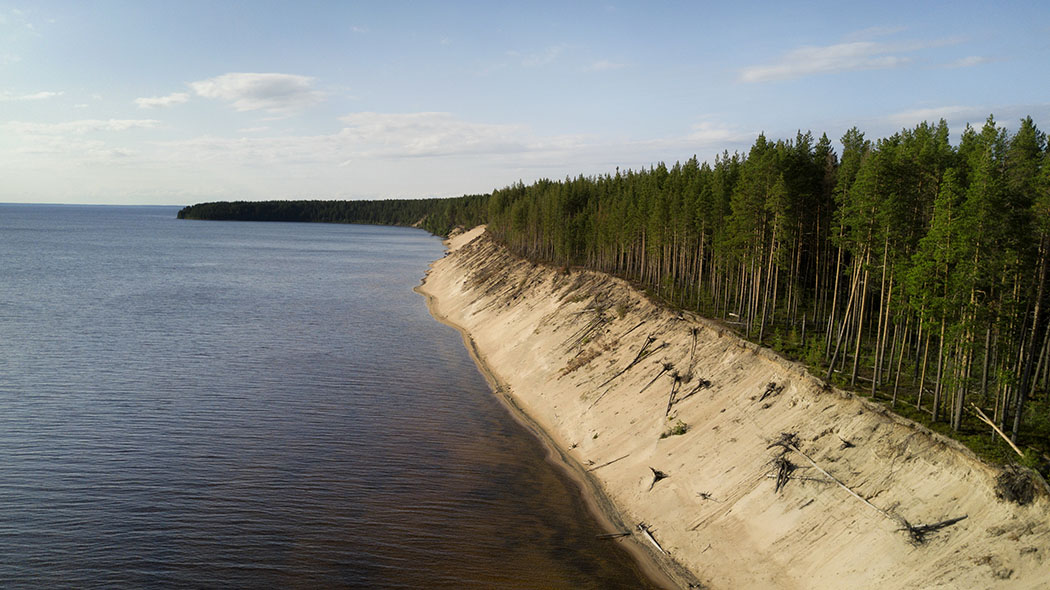 There are various kinds of wind and shore landforms in Ärjänsaari Island. The island is lined with eroded banks, which are several kilometres long and 15–23 metres high. In front of the eroded banks, there are sandy beaches and underwater terraces, which are 200–300 metres wide. There are gravel and rocky beach ridges and lake ramparts in Karkeapää in the western part of the island. 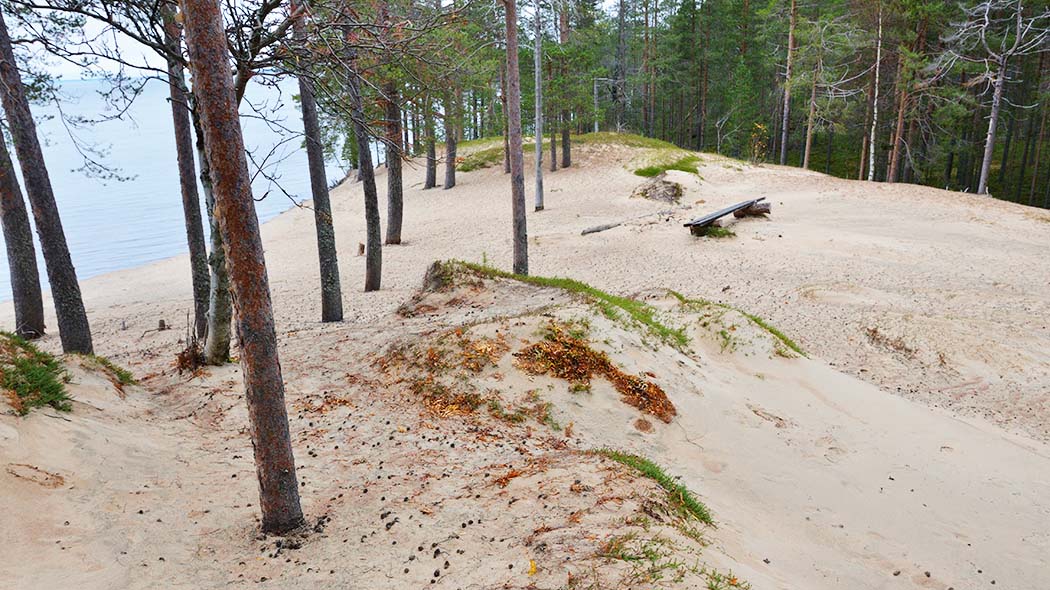 The banks, dunes and drift sand are such shore and wind landforms that continue to actively transform. In inland lake areas, these kinds of landforms are rare, as their formation requires a large stretch of water, i.e. sea-like conditions.  Säippä and Kirkkosäikkä are sandbank-like tips of peninsulas. On their beaches, you can see embryonic dunes, deflation areas and sandy tufts of grass. There are also lakeshore and parable dunes on the island. The narrow depressions between the dune zones and the actual esker area have paludified.

Over an extended course of time, fine sand – carried by the wind – has piled up in a pine forest in the Lentohiekka cliff bank area. This huge cake of sand has gradually become a secondary mattress of drift sand that continuously changes its shape.

As regards traces of the Ice Age, there are some shallow kettle holes in the esker terrain in the southern part of the island. 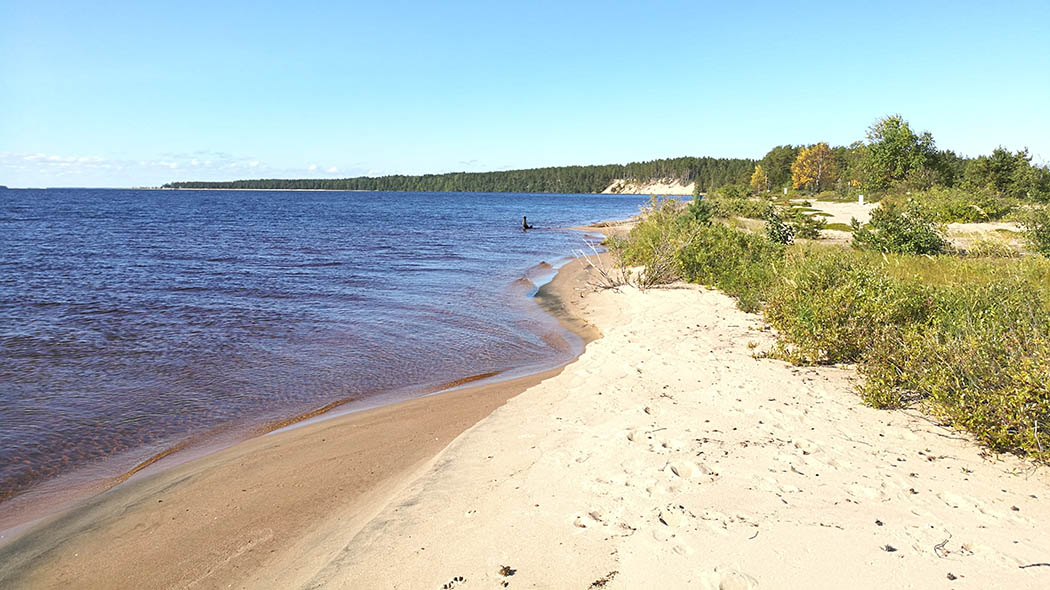 Ärjänsaari Island was bought for the State of Finland for nature conservation purposes. It has been included in the shore conservation programme and the Natura 2000 network, as part of the area formed by the islands and shore areas of Lake Oulujärvi (FI 1200 104). The largest part of the total area of the island consists of forests, chiefly old pine forests. On the island, there are 12.1 hectares of Natura 2000 habitats that are in accordance with the Habitats Directive. Most (8.9 hectares) of these habitats consist of boreal natural forests. 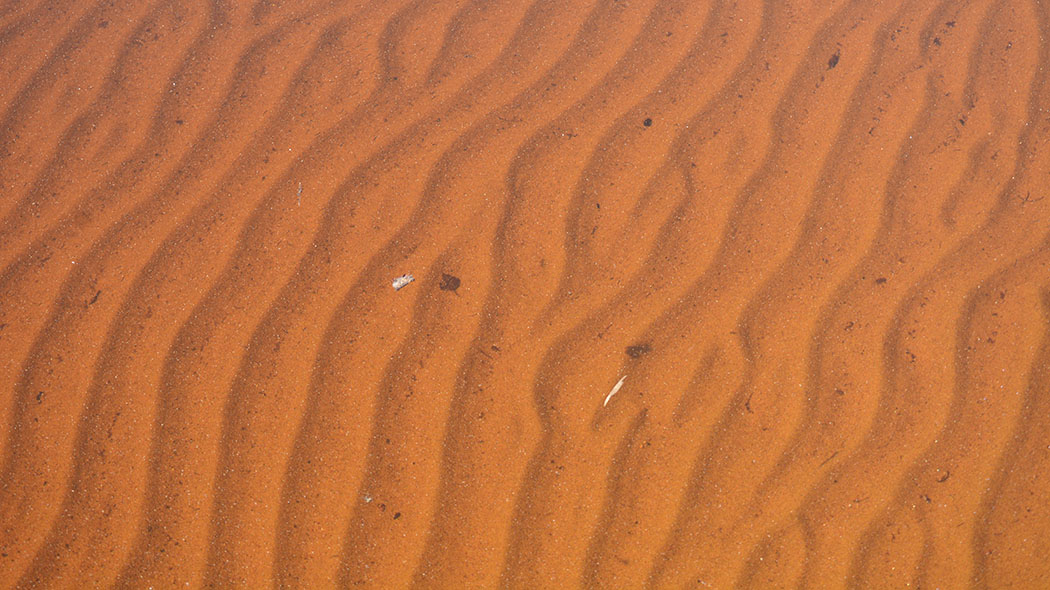 An Island Filled with Pine Heaths

Most parts of Ärjänsaari Island are covered by spacious heath forests, where walking is easy. The forests of the island are even-aged, old pine forests in a sandy heath. The most common vegetation types are the Vaccinium-Myrtillus (lingonberry-bilberry) type and the Empetrum-Vaccinium (crowberry-lingonberry) type. There have been felling activities numerous times, but time and peace increase the biodiversity of the forests and the extent to which they are in their natural state. The latest fellings on the island took place in 2016, when thinning and small-scale clearcutting were carried out in an area that covered about 65 hectares. The most common tree species on the island is the pine. Due to the sandy soil, the forests will continue to be pine-dominant, and handsome old trees enrich the landscape. There are not many spruces on the island. There are grey alder, silver birch and aspen trees, particularly in the more nutrient-rich areas, such as in the herb-rich forest that surrounds the old café building. In addition, there are small mire areas in the eastern and southern parts of the island. 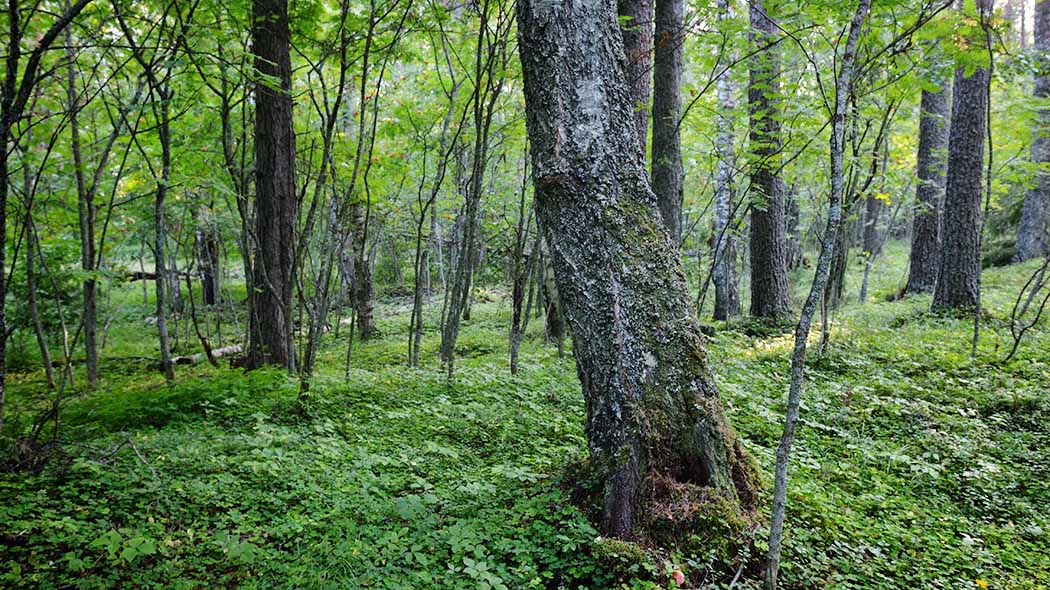 As a counterbalance to the rugged esker forests in the inner part of the island, there is a herb-rich forest with humus soil in the surroundings of the old café building. The plants use groundwater that is generated in the area. The herb-rich forest is home to the baneberry, the mezereon, the spring vetch, the fingered sedge and the wood vetch. The sand dunes in the Säippä and Kirkkosäikkä tips of peninsulas offer potential sun-exposed habitats for insects, but the species have not yet been thoroughly studied. Polypores have preliminarily been studied in the herb-rich forest that surrounds the café and along the trails. Amongst the indicator species of the old-growth forests on the island are the soft bracket and Phellinus pini, which is a common sight on old pines on the island. In the herb-rich forest, there are polypore species that grow on deciduous trees and on the birch, in particular. Amongst these are the artist’s conk, Phellinus punctatus syn. Fomitiporia punctata, the willow bracket, smoky bracket, gilled polypore, chaga mushroom, tinder fungus, birch polypore, mossy maze polypore and the ochre bracket. All these polypores indicate that there is decaying birch wood in the herb-rich forest. 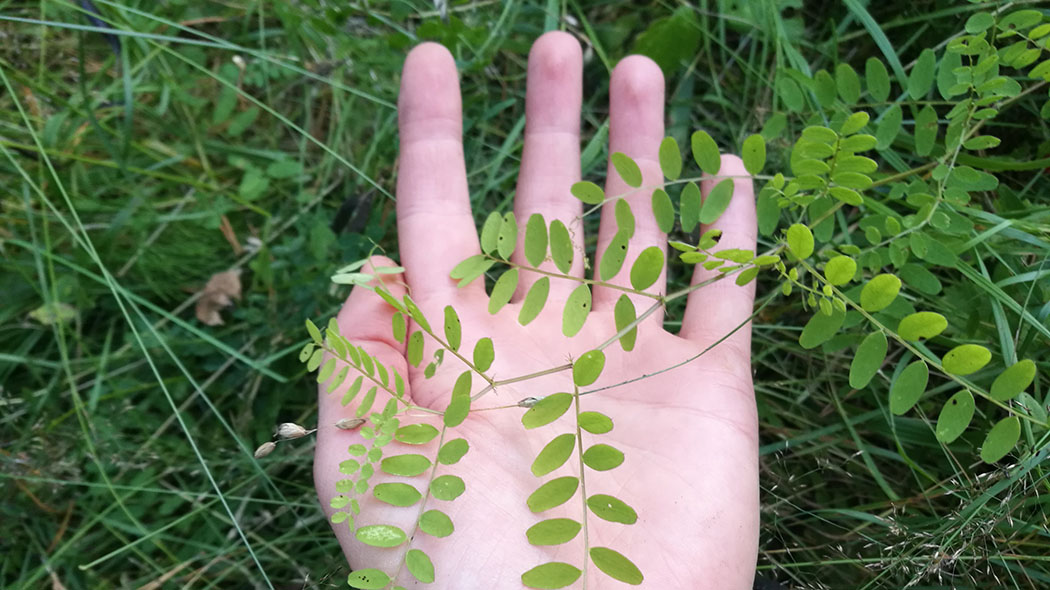 Only few mammals live on the Ärjänsaari Island. The ones that have been sighted on the island are elk, roe deer, fox and mountain hare. In Kirkkosäikkä, which is the eastern tip of the island, there is a bird nesting area that may not be entered by people or pets during the nesting period of the waterfowl. Dozens of common terns, arctic terns, common gulls and black-headed gulls have nested in the area, but in recent years, there has not been a nesting bird community in the area. In addition, there is no reliable data from the 21st century regarding the nesting of sand martin communities in the open sand cliffs of the island.

In Kirkkosäikkä, which is the eastern tip of the island, there are birds whose nesting is easily interrupted if they are disturbed. Do not beach on or enter the nesting area from 1 May to 31 July.

The sandy beaches of Ärjänsaari Island are shaped by the ice, waves, the wind and the blazing sun, creating special, changing conditions that are demanding for species. However, the sand dunes, the herb-rich forests where the baneberry thrives and the light-filled pine forests provide favourable habitats for many invertebrates. In a study of insects that was carried out in the summer of 2018, a total of 314 insect species were sighted on the island. Out of them, the share of butterflies and moths was 204 species. In addition, there were 29 species of Hymenopetra, 49 beetle species, 4 species of Diptera, 10 species of Heteroptera and 18 species of Auchenorrhyncha. 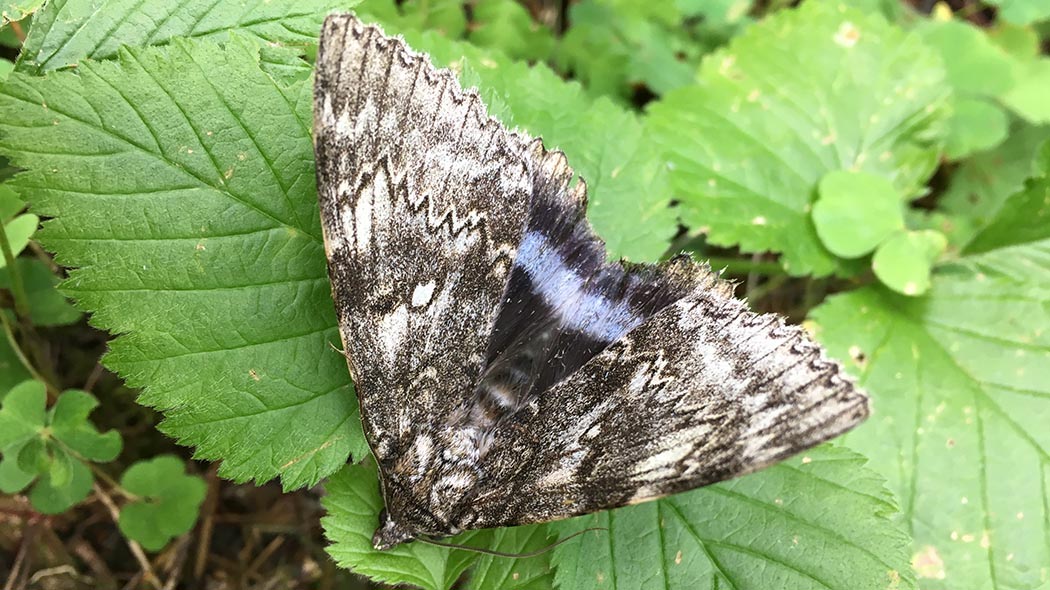 Six threatened and near-threatened butterfly and moth species were sighted. Three of them were spotted in the Kainuu region for the first time. One of them is Schytris empetrella, which is an endangered moth species that lives on dunes covered by crowberries. The population of Scythris empetrella on Ärjänsaari Island is the only known population in inland Finland. Besides the island, it is only sighted in a few places on seaside dunes of the Bothnian Bay and the Gulf of Finland.

The following species that were new to the Kainuu region were also sighted: Etainia albibimaculella and Coleophora arctostaphyli.

The most common moths were Eurois occultus, the rosy rustic and the knot grass moth.

Ärjänsaari Island is home to insect species that require sheltered, sun-exposed environments and dunes. In addition, the vegetation must remain partly covered by sand. This is why the island’s shores are managed, not allowing them to become overgrown.

The study of insects was continued on Ärjänsaari Island in the summer of 2019. The study was part of the Paratiisin ovet aukeavat project that was implemented by Metsähallitus. The project was funded by the Oulujärvi LEADER association from the European Agricultural Fund for Rural Development (EAFRD). 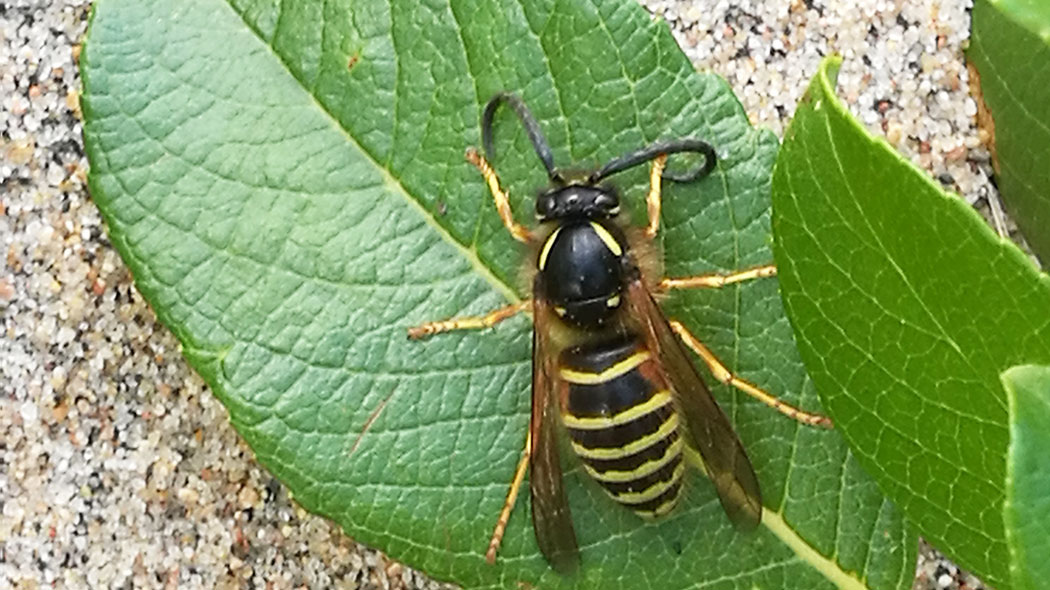