Sights and History of Neitvuori-Luonteri Area

Neitvuori is one of the highest hills in South Savo (184 m). The peak rises 110 m above the surface of Saimaa. Neitvuori offers open vistas of the archipelago and forest landscapes of Luonteri. In good weather, there is unobstructed visibility from the rocky hill for tens of kilometres.

The patchwork of waters, green islands with rock shores, and green land areas stretch into the distance, eventually merging into a dark blue horizon. The rocky slopes are punctuated by moss and lichen covered boulders and sheer rock faces in some places. 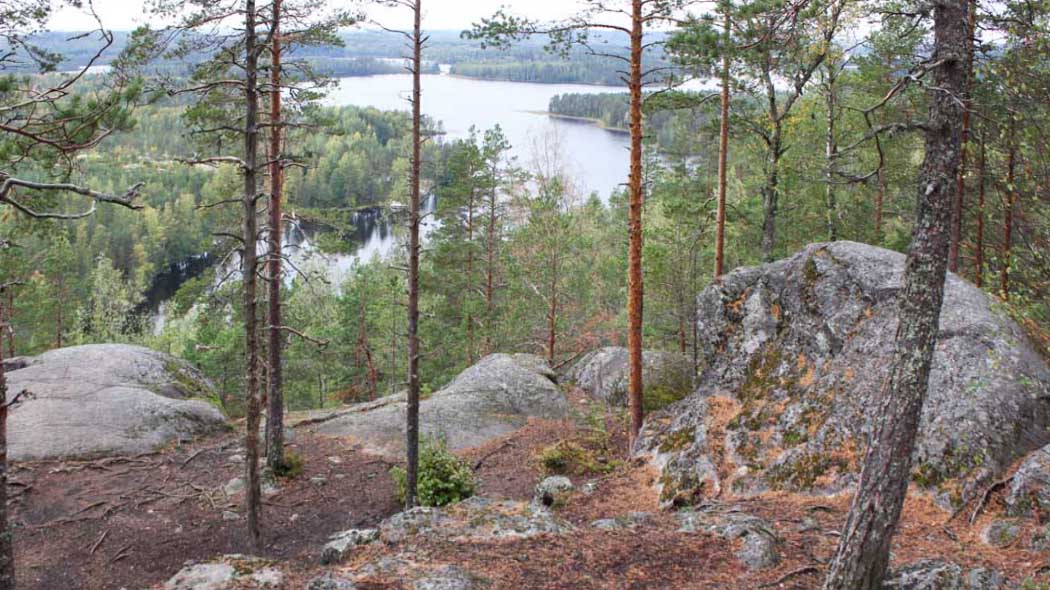 The terrain at Neitvuori was formed by the upheaval of the last Ice Age. The area is characterised by cracks and abrasions in the bedrock, which was scoured clean by the continental ice sheet. The intact bedrock mass of Neitvuori rises from among these.

There are countless stories associated with Neitvuori. Its original name was Hiidenvuori. The old meaning of the word hiisi does not refer to a water spirit or a giant, but rather to sacred places such as sacrificial or burial sites. According to legend, the name was changed when a young woman jumped off the hill because of a broken heart.

Neitvuori and its rocky terrain are part of the Saimaa Geopark, which received UNESCO Global Geopark status in the spring of 2021. The Geopark contains dozens of geological sites in the Saimaa area.

Sarkasvuori hill, with its rock paintings, rises above the eastern shore of Sarkalampi at Uimasalo. The Moose of Sarkasvuori is painted at a height of approximately 3.5 metres on the rock face, which rises almost vertically from the shore. At the time the painting was done, there was a strait at Sarkaslampi, with a direct connection to Saimaa.

The elk depicted represents the hunting culture. At the top of Sarkasvuori, there is currently a winter grazing area for moose. It is possible that moose had previously been hunted by driving them off the rock onto the frozen lake.

Another rock painting at Sarkasvuori is approximately 500 metres southeast of the Moose painting. Only part of this painting, a boat, is still visible. The painting is at a height of approximately 5 metres. There is an ancient quartz mine at Ristilampi, which is located near Sarkasvuori.

Also located in the vicinity is Tikaskaarteenvuori hill, whose steep rocky slope boasts several rock paintings. The human figures depicted have bent knees and their hands are raised. Because the paintings are found high up on the hill, they are extremely difficult to see from the ground without using some kind of magnifying instrument. The paintings cover an area of approximately 3.5 metres in width.

The rock paintings are protected by the Antiquities Act. Do not damage them. 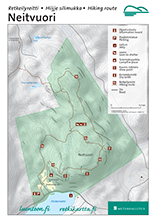