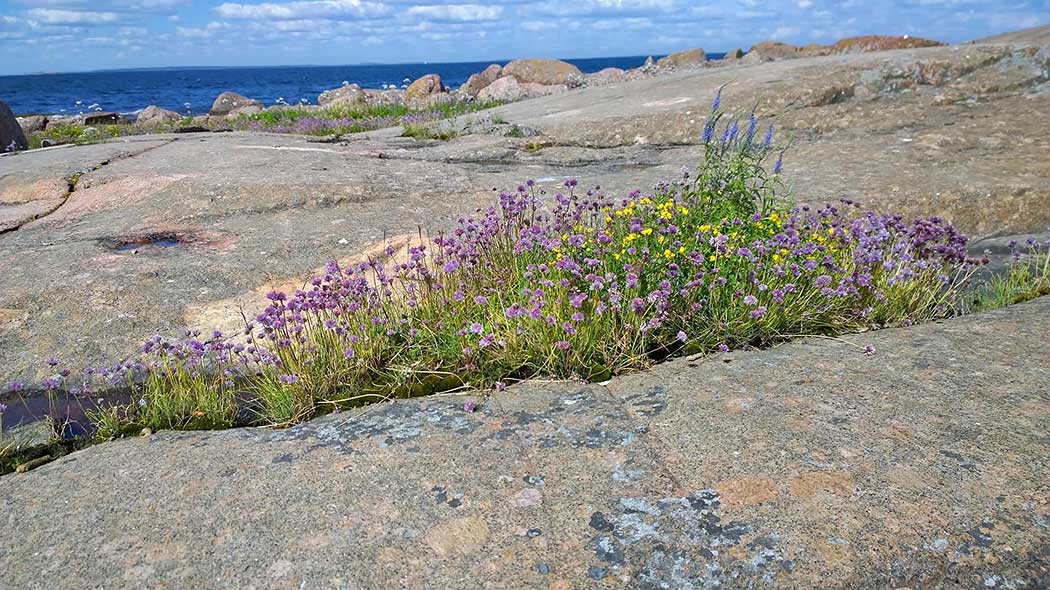 The Eastern Gulf of Finland National Park has an outer archipelago that is ruggedly beautiful. In the spring, hundreds of thousands of migratory birds fill the sky during their journey towards the Arctic region. 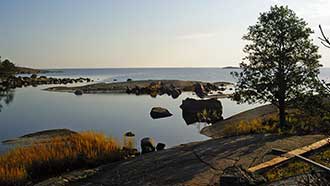 Storm-beaten rock faces, lush groves and meadows by the waterside. The island of Ulko-Tammio, and islands adjacent to the National Park, Haapasaari and Kaunissaari, represent archipelago idyll. Read more > 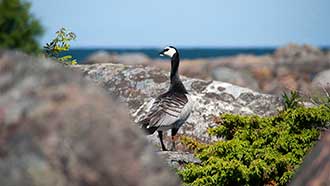 Through the Eastern Gulf of Finland, millions of birds migrate annually between the wintering areas and the Arctic regions of Russia. People even come from abroad to monitor migration. Read more > 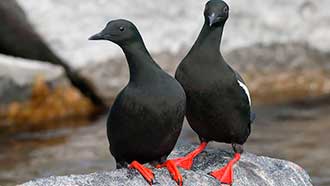 The regional emblem of the National Park is the black guillemot (Cepphus grylle) that nests on the rocky islands. However, the number of the species has decreased in recent years.
Read more > 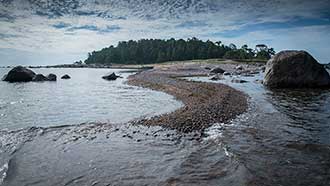 Pitkäviiri - a destination for a warm summer day

Nearly untouched island rises from the sea as an extension of the sandy esker. The longest sandy beaches in the park can be found in the northern part of Pitkäviiri. Read more > 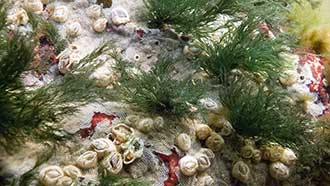 Enchanting nature beneath the surface

Did you think there is no life under the sea surface? There are colourful and unbelievably diverse organisms in the Eastern Gulf of Finland.
Read more > 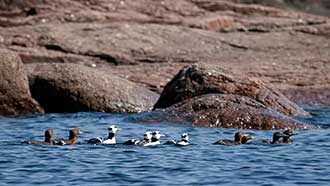 During the nesting season birds in the outer archipelago need space. Landing on the islands threatens their reproduction. Therefore, it is important to know where the no-go areas are! Read more > 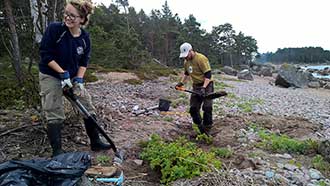 Ringing birds, collecting rubbish washed up from the sea and other nature management tasks are examples of important work for nature. Thank you! Read more > 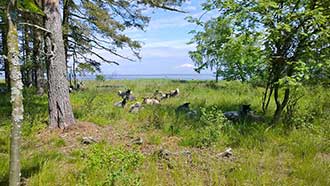 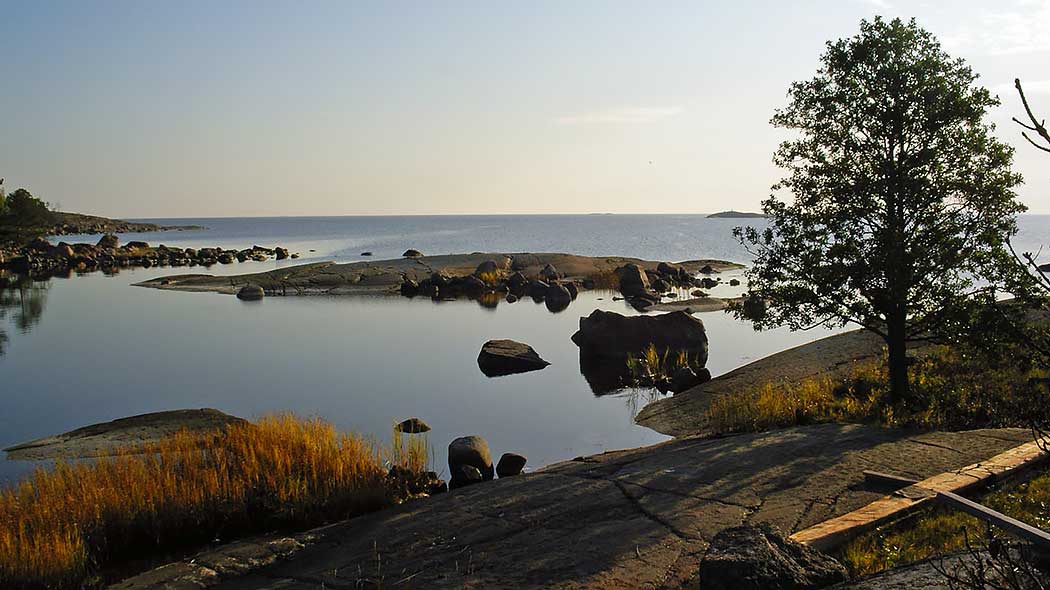 Most of the islands in Gulf of Finland National Park are steep-sided and bare rocky islets washed by the waves. This is typical for the southern coast of Finland, because the bedrock, reddish brown rapakivi granite, grinded by the Ice Age and the sea, splits into cubic forms. Between the boulders grow thickets of bushes. At some places the ice and waves have made embankments out of the cobble stones and gravel, where the terraces are full of yellow flowers in the beginning of the summer. Often on these gravel fields nests a large community of Arctic Terns (Sterna paradisaea). In the winter, the ice on the Gulf of Finland is an important area for the reproduction of the Grey Seal (Halichoerus grypus) and Baltic Seal (Phoca hispida botnica).

The vegetation on the forested islands usually consists of low, sparse pine forests and reindeer lichen (Cladonia rangiferina), and rooted in the cracks of the rock grows the Common Juniper (Juniperus communis). In the inner parts of Ulko-Tammio Island and the other larger islands you can find surprisingly lush southern herb-rich forests. The most luxuriant of the islands is Ristisaari Island with its Common Ash (Fraxinus excelsior) groves, flowering dry meadows and coastal meadows. The island was formerly used as a pasture by the inhabitants of Kaunissaari Island.

In contrast to the rocky islands, there is Pitkäviiri Ridge, a 2-km-long esker island which has risen from the sea. For a long time, its sandy beaches and large shoals have been a popular destination for sunny day trips in the summer. 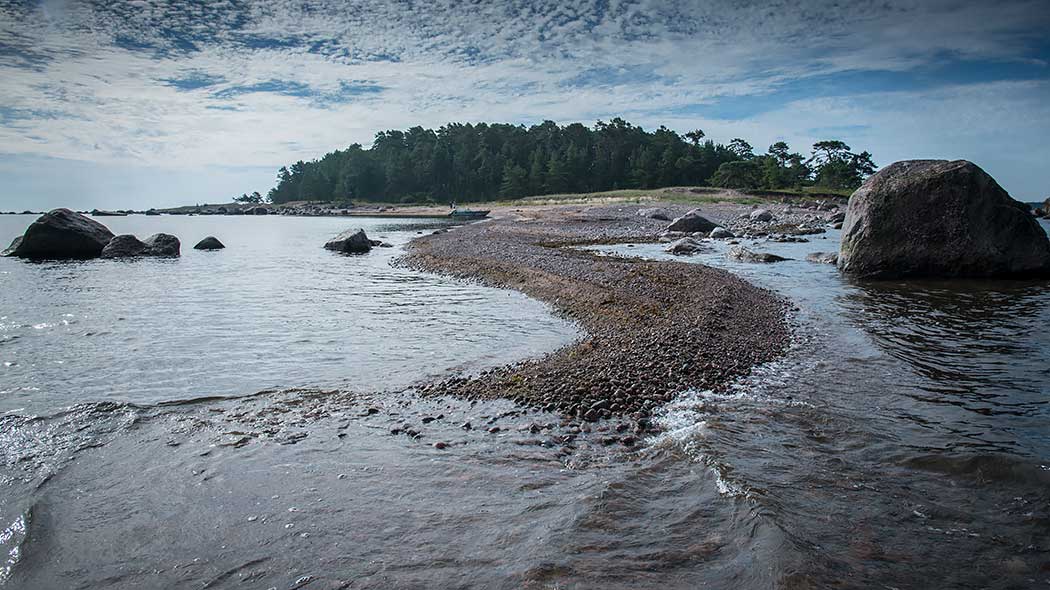 Gulf of Finland National Park is famous for its set of sea birds, and there are many good islands for birds in the area. The most common bird species include the Goosander (Mergus merganser) and the Tufted Duck (Aythya fuligula). On the islets where landing is restricted, can even the more demanding birds of the open sea find a peaceful place for nesting, for example the Razorbill (Alca torda) and the Black Guillemot (Cepphus grylle). Also the Velvet Scoter (Melanitta fusca) which has declined strongly elsewhere in Finland, still nests in the park. Other sea birds which are few in number, such as the Guillemot (Uria aalge), the Greylag Goose (Anser anser) and the Rock Pipit (Anthus petrosus), can also be seen. The Barnacle Goose (Branta leucopsis) is a new rare and interesting nesting bird in the park area. 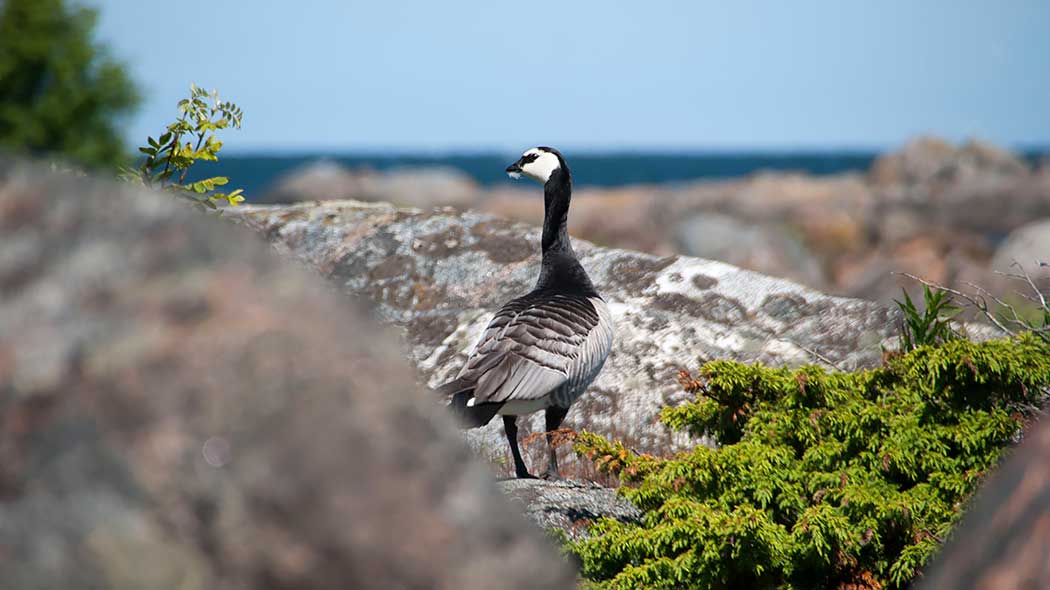 The low salinity of the brackish water restricts the distribution of many species in the Gulf of Finland. For example the Common Eider (Somateria mollissima), which is the dominant species of the rest of the Baltic Sea, is few on the eastern Gulf of Finland compared to the western parts, because its mainly eats the Common Mussel (Mytilus edulis), which is small in size and numbers in these parts. Another dominant species of the Baltic Sea, the Bladder-wrack (Fucus vesiculosus) lives in the National Park at the extreme limits of its distribution.

The end of May is the best time for bird watchers. Hundreds of thousands arctic water birds and waders pass through the area on their way to their nesting places in the north. The most abundant migrating birds are the Long-tailed Duck (Clangula hyemalis), the Black Scoter (Melanitta nigra), the Velvet Scoter (Melanitta fusca), The Barnacle Goose (Branta leucopsis), the Brent Goose (Branta bernicla) and the Dunlin (Calidris alpina).

Black guillemots at the Eastern Gulf of Finland

The black guillemot is a typical species found on rocky beaches in the outer archipelago. It is easily recognisable by its suit of black feathers with a white oval patch on the wing. The species has spread to the entire coast of Finland and it nests in communities, which can contain many hundreds of birds. In Finland, their numbers have declined sharply in the last decade and because of this rapid decline the black guillemot is now classified as highly endangered. 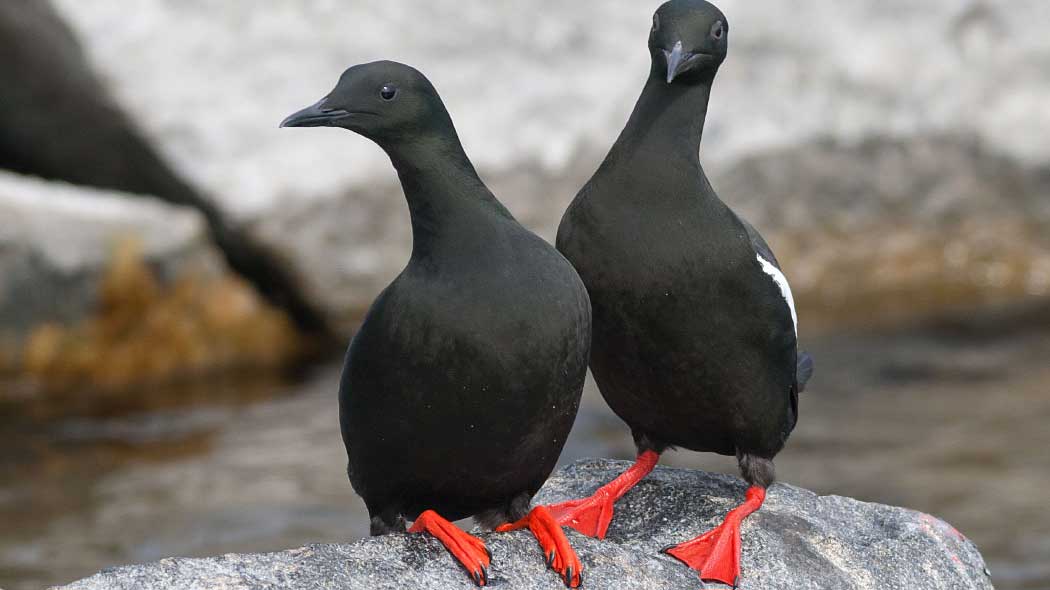 Black guillemots nest in rock cavities and under rocks. There, unlike other auks, they lay two eggs. The chicks leave the nest at about six weeks of age. Black guillemots usually migrate from the beginning of August to the southern Baltic for wintering. Only a small population will stay in the north if the sea remains open. The birds return in the spring immediately after the ice melts.
In the 2000s, the population of black guillemots in the Eastern Gulf of Finland has dropped by more than half. This is because the mink has spread to the archipelago. To protect the bird population there have been active efforts to remove the mink.

Enchanting nature beneath the surface of the Eastern Gulf of Finland

Nature beneath the surface of the Eastern Gulf of Finland is an exciting mix of freshwater and saltwater species. The underwater nature is diverse: there are glaciated rocks at the bottom and reefs with zones of bladder wrack (Fucus vesiculosus), rocky areas of all sizes, sandy surfaces with vascular plants, gravel in constant motion and sheltered bays with a muddy bottom. The most important factor determining the flora and fauna in these areas of the outer archipelago is openness, and the resulting movement of water. Calm bays in the outer archipelago, in turn, provide important shelters for various young fish. With its nature, the Eastern Gulf of Finland is part of the EBSA network of Ecologically or Biologically Significant Marine Areas. 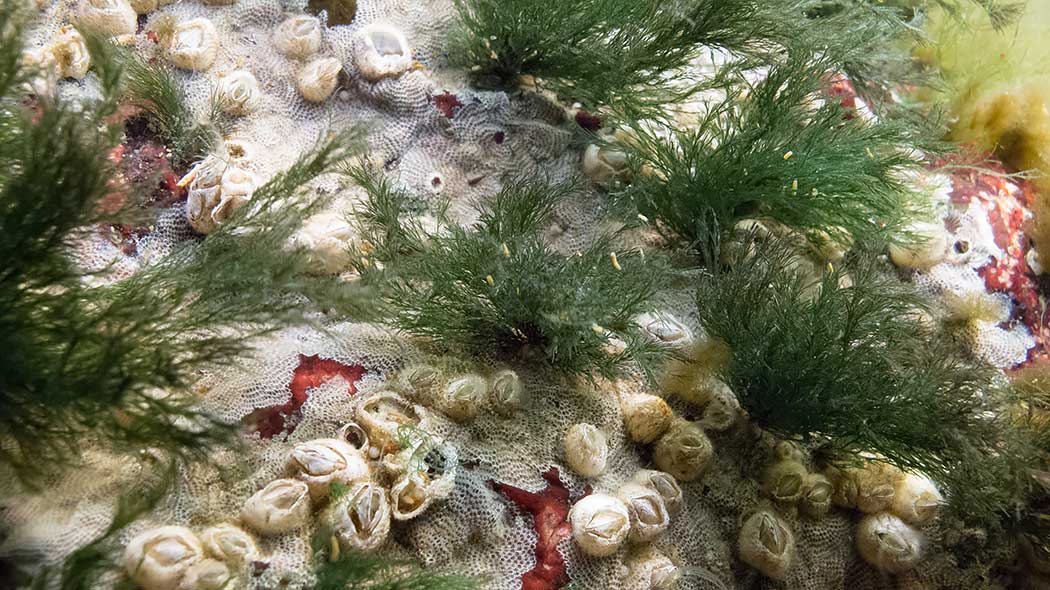 Results of underwater monitoring spanning over ten years give us hope: despite eutrophication, there are beautiful and unbelievably diverse communities or animals and organisms in the Eastern Gulf of Finland. Diving can be a world-class pastime in certain parts of the outer archipelago where water is particularly clear! 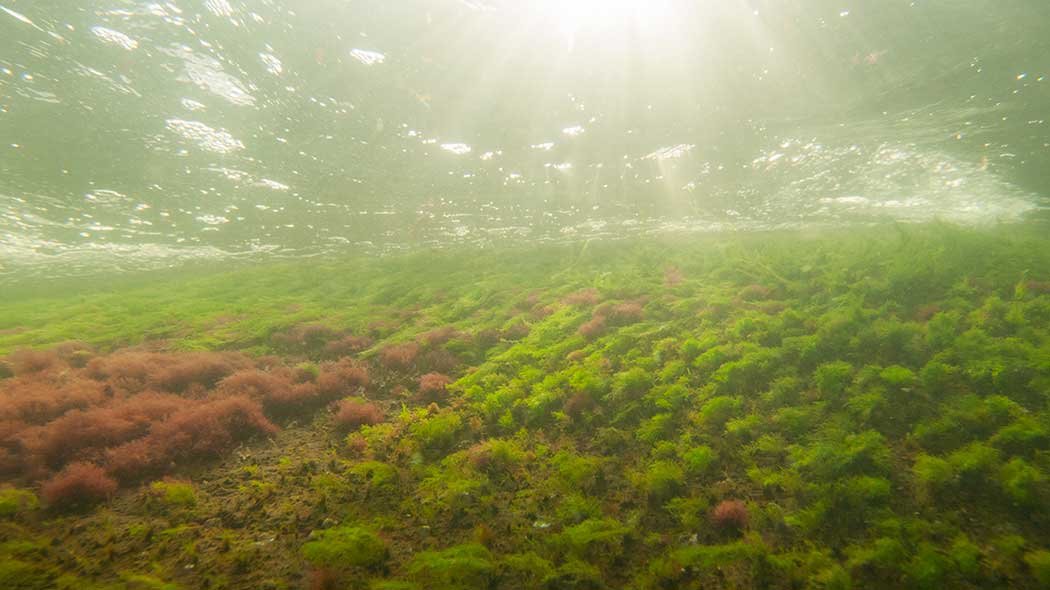 One species in the outer archipelago of the Eastern Gulf of Finland is the green seaweed (Cladophora rupestris), which creates a gorgeous deep green carpet under the zone of bladder wrack.  It replaces the red algae (Rhodophyta) zone typical for our Western sea regions, as the salt content is too low for many red algae species. These algae zones are important: they provide shelter for various invertebrates and young fish. The most open areas are suited for algae firmly attached to the surface, and different filter feeders such as the bay barnacle (Amphibalanus improvisus), freshwater sponge (Ephydatia fluviatilis) and Electra crustulenta (Electra crustulenta). Sheltered by rocks, there are various different types of fine fibrous and filamentous algae, such as Audouinella (Audouinella spp.). Watermilfoils (Myriophyllum) and Zannichellia, commonly known as horned pondweed, effectively root themselves in the smallest gaps of gravel or sand, where you may also find a funny little charophyte, the bird's nest stonewort (Tolypella nidifica). 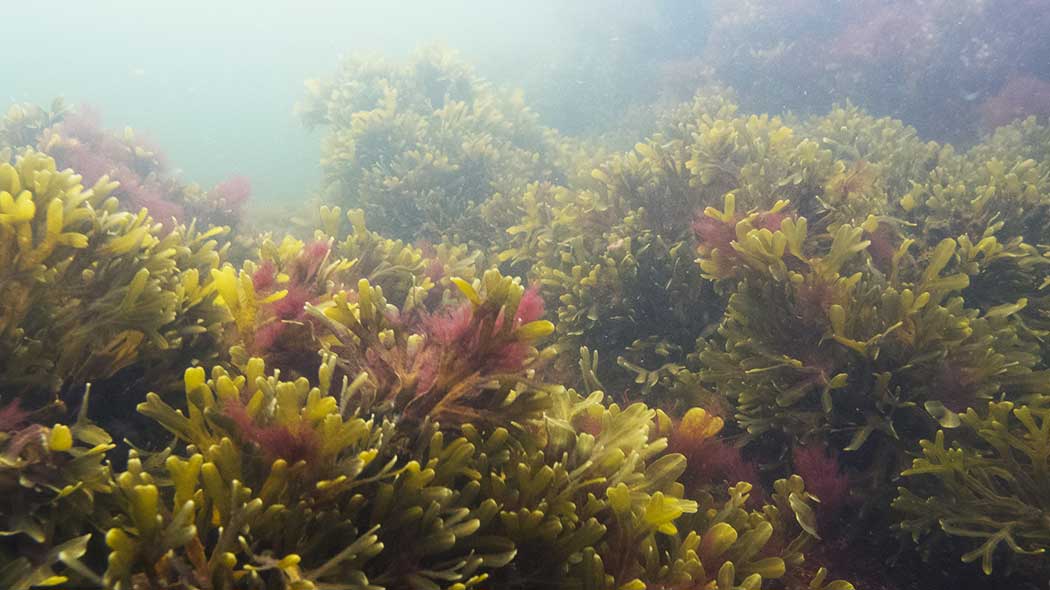 Light’s ability to pass through water, or in practice, underwater visibility, determines how deep certain water plants and algae can grow. In the Eastern Gulf of Finland, the maximum growing depth is, on average, ten metres, but molluscs (Bilvavia), other invertebrates and fish can also thrive considerably deeper.