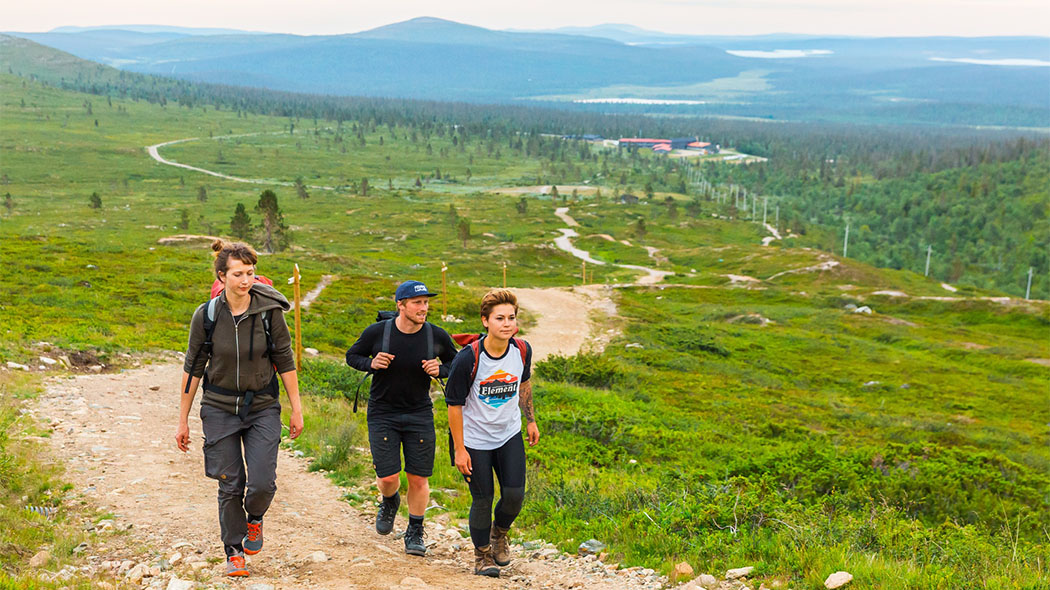 The sights of the fell area will be presented from the most southern ones to the northern ones, from Yllästunturi Fell to the Ounastunturi Fells.

The Varkaankuru Ravine is located between Ylläs and Kellostapuli. It appears by surprise from behind bends. The herb-rich forest is so lush it seems like something out of a fairytale. The old trees and grass as tall as a man make the forest feel like a wizard's realm. The new herb-rich forest is interrupted by spots of ferns and spruce. The most spectacular plants are the tall Angelica (Angelica arcangelica) and the Alpine Sow Thistle (Cicerbita alpina). Smaller and more classically beautiful are the Heath Spotted-orchid (Dactylorhiza maculata) and the Frog Orchid (Coeloglossum viride). 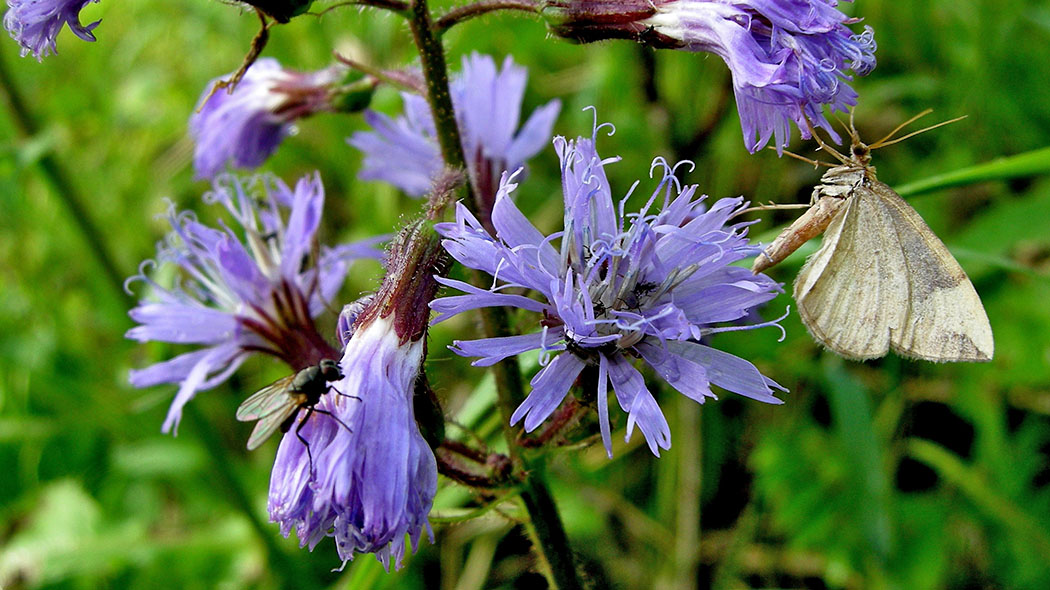 With a bit of imagination the practically ancient spruce trees seem like a group of wizards holding a meeting. In the midst of the murky and dense spruce forest the Downy Birch (Betula pubescens), the European Mountain-Ash (Sorbus aucuparia) and the Goat Willow (Salix caprea) bring a lighter vibe to the woods.

A memorable experience for many visitors is climbing from the east end of Lake Kesänkijärvi through Pirunkuru Ravine up to the top of the 517 metre high Kesänkitunturi Fell. The old pine forests on the fell slope with ancient (still growing) trees and dead standing trees are the most spectacular in the area. 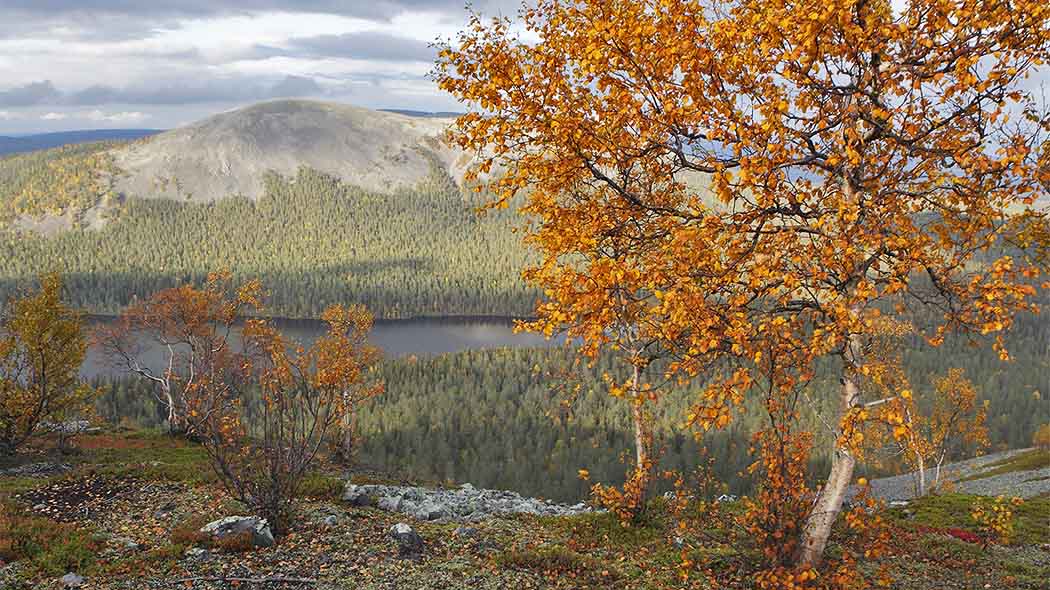 Äkässaivo is located 10 km north of Äkäslompolo in the watershed area, where the River Äkäsjoki flows. It is outside the National Park's boundaries, but it is valuable, because of its calcareous earth, as a growth place for many mosses. On the shore of the lake, which the Sámi considered sacred and is surrounded by the high walls of the gorge, there is an old pagan church and an ancient Sámi sacrificial rock, which was a place of worship. Saivonkierros Trail is a marked hiking trail at Äkässaivo.

Another holy lake Pakasaivo is also outside the boundaries of the National Park. It is located 15 km west from Äkäslompolo. It was formed when the continental glacier melted and the watershed came to be. This like Äkässaivo has steep cliff walls and was a place of worship. The holy lake is believed to be double-bottomed, so that fish sometimes disappear to the lower level of the lake. The rock sides, which hold the water of the lake, are 50 to 70 metres deep and according to studies there is 60 m of water. The water in Pakasaivo does not follow the normal annual cycle of lake water. Its bottom waters have an unusually high reading of hydrogen sulfide. 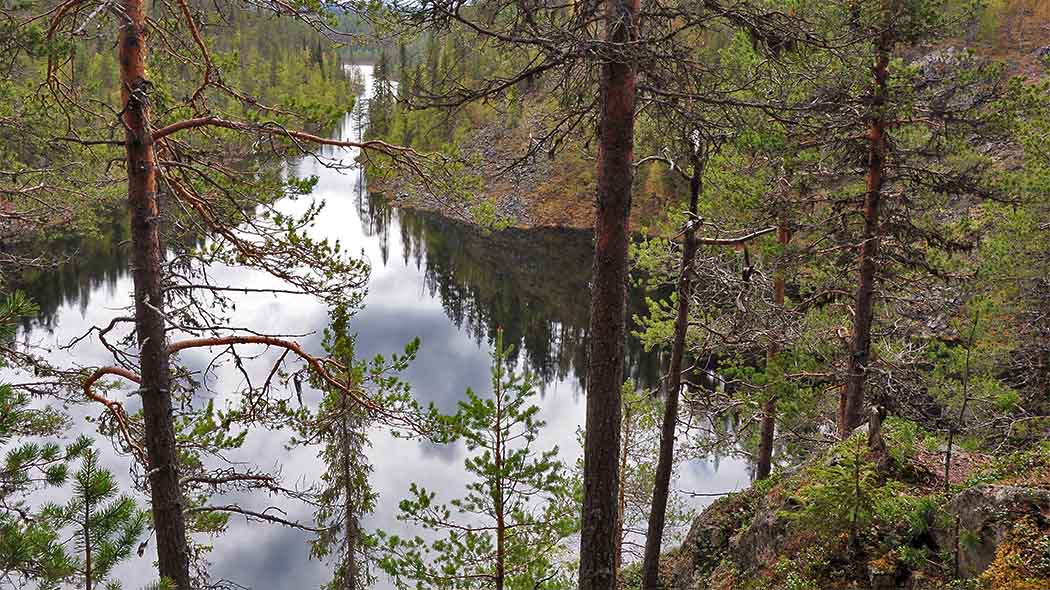 The area's bedrock bears evidence of a volcanic eruption, which happened 2 miljard years ago. Geologists have found lava, which gathered on the ancient seafloor after underwater eruptions, ash in shallow waters and volcanic gravel. Even the mouth of the volcano can be pointed out in the terrain. We see that stories about Lapland's ancient volcanos and Alp-like mountains are true.

The volcanic soil is fertile. This is evident in the area around Linkupalo from the abundance of raised bogs and the diversity of mosses and vascular plants in them.

The Aakenustunturi Fells give hikers great views to the horizon. 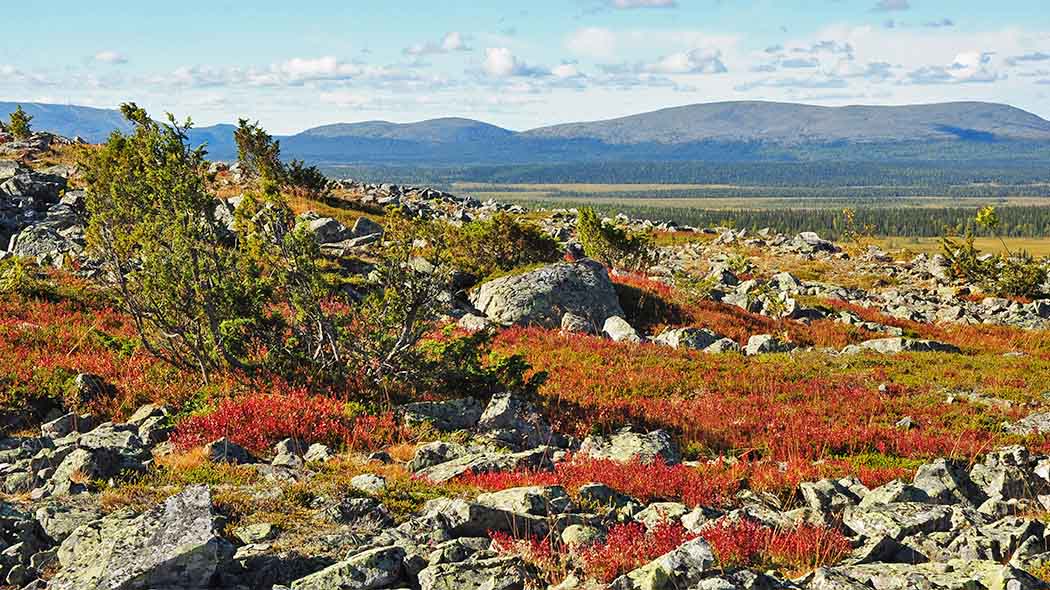 Pallastunturi and Its Surroundings

Lake Pallasjärvi is a picturesque, with its surface reflecting the Pallastunturi Fells in tranquil weather. The simplest way to get to the lake by car is at the Hirvaslahti Bay and Pallaslompolo boat docks. There are also campfire huts at these locations with campfire spots. 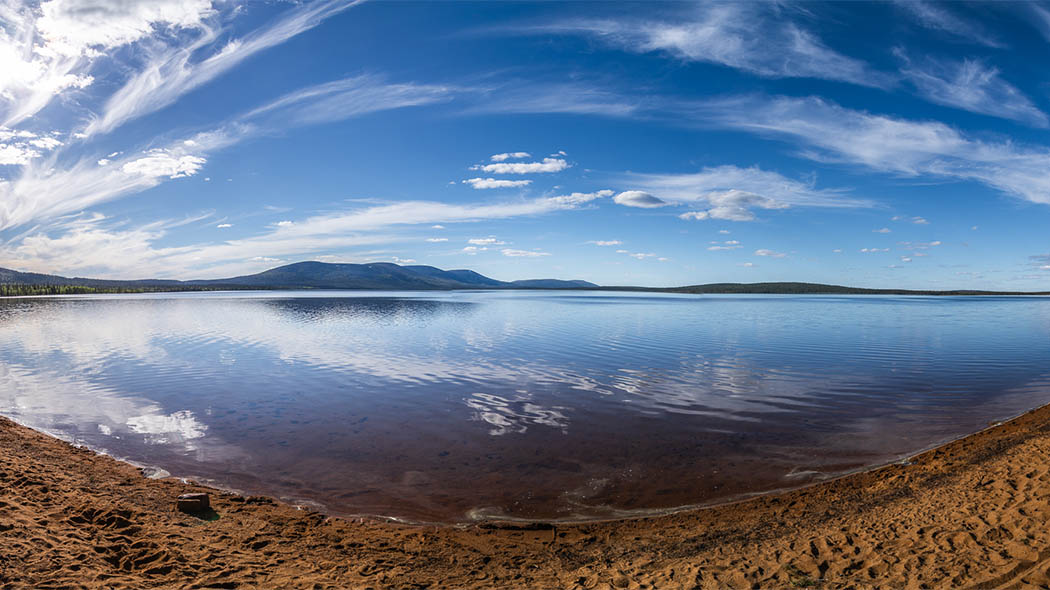 Named after a former forest ranger of the Pallas-Yllästunturi National Park, the Pakasmaa meadows (Upper and Lower Meadow) are located close to Lake Pallasjärvi. The Upper Meadow is bisected by the road between Lake Särkijärvi and Raattama and a nature trail, and the Lower Meadow is bisected by a narrow gravel road running to a former administration building. In 2002, Metsähallitus gave the meadow a restoration clearing, after which the meadow has been maintained by mowing. 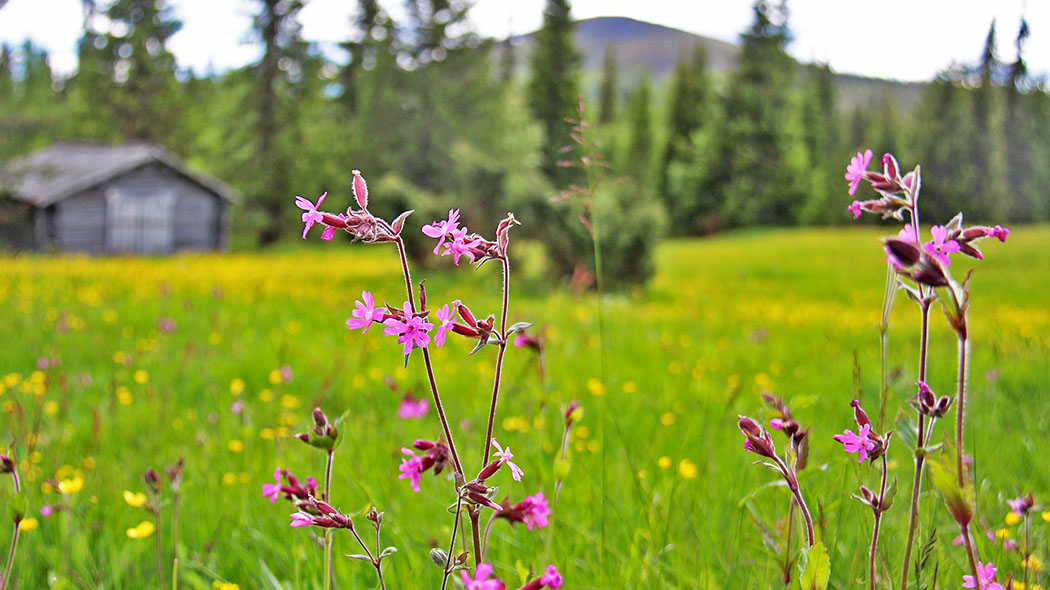 A 3,5 km-long nature trail follows the banks of the River Pyhäjoki, which flows into Lake Pallasjärvi. The trail leads through exceptionally lush and fertile spruce forest, where Ostrich Fern (Matteuccia struthiopteris) forms dense spots of greenery. The river winds about and high cliff walls surprise visitors as they suddenly appear from around a corner. The soft mossy floor of the spruce forest gives it a fairytale-like quality and is an ideal habitat for an abundant array of small mammals.

Taivaskero Fell is the highest summit in the fell chain. Its rocky top reaches a height of 809 metres above sea level. From its top hikers can admire a vast view and fell scenery. At the top there is a memorial plaque in honour of the 1952 Olympics. Finland's Olympic flame was lit at the top of Taivaskero as the midnight sun lit the sky. It was then transported by runners to Helsinki, where it was joined with the Olympic flame from Athens. 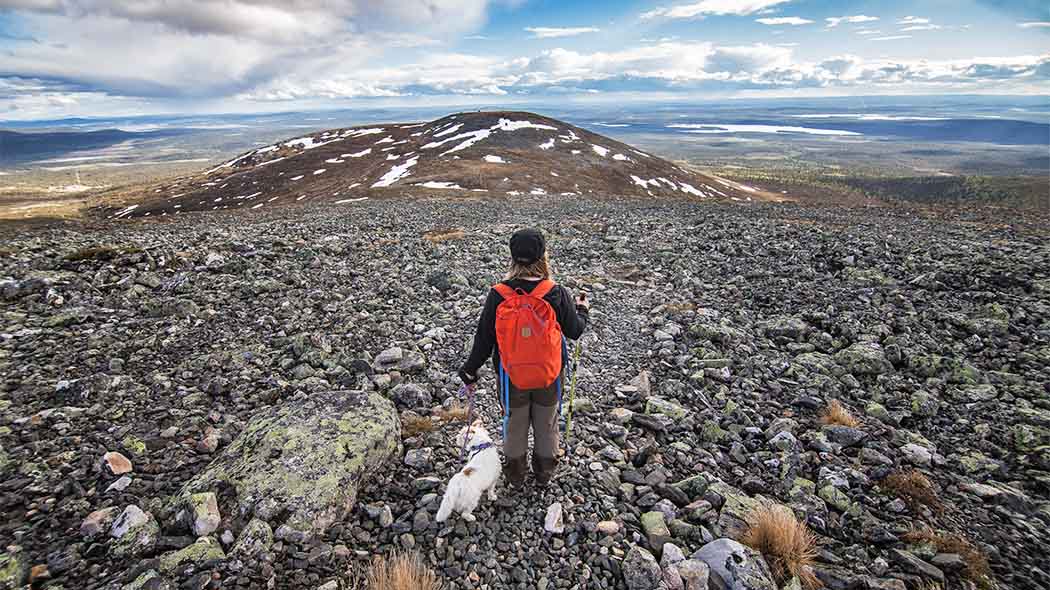 There is a 4-km-long marked trail from Pallastunturi Visitor Center to the top of Taivaskero Fell. The altitude difference is 300 metres, so it is quite a demanding climb.

Montell's Hut (Montellinmaja) is located in the Pallastunturi Fells between the Vuontiskero and Saivokero Hills above the timber line. The original building was built by forest ranger Justus Montell in the beginning of the 20th century, to use as a base camp on his expeditions. The hut was destroyed during the war, but reindeer herders built a new one on the site. The hut used to be an open wilderness hut for hikers. Today, hikers are served by a nearby campfire site. The nearest open wilderness hut is in Nammalakuru.

On the foot of Keimiötunturi Fell, on its northeast side, is Lake Keimiöjärvi, which has a very unique atmosphere. Keimiötunturi Fell, which rises above a dark spruce forest, seems to rise up out of the lake. The hut on the lake's eastern shore is a day trip hut and is located about 3,5 km from the Jerisjärvi road. The cabin on the west shore is locked and is a rental hut.

Cape Keimiöniemi at Lake Jerisjärvi with its fishing huts is one of the area's cultural heritage sites. The huts are privately owned, but you are welcome to visit and have a look at the beautiful old buildings. 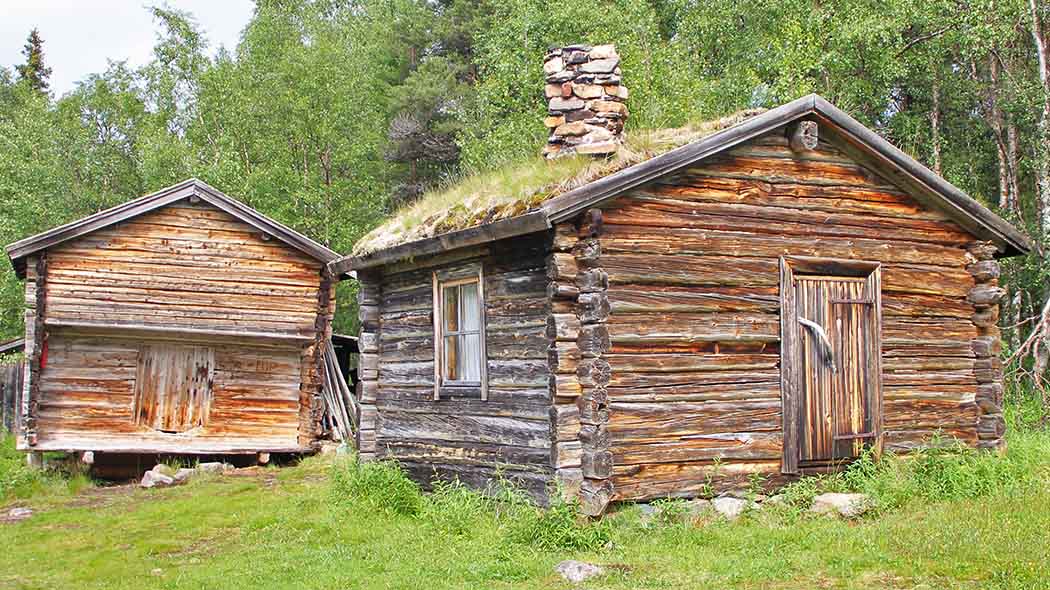 Ounastunturi Fell and Its Surroundings

Pyhäkero open wilderness hut is at the north end of the National Park at the foot of Pyhäkero Fell. It is located 7 km from the shore of Lake Ounasjärvi. Hikers can rest at the hut before beginning their ascent to the top of Pyhäkero Fell, the old signature fell of the Ounastunturi Fells. At Pyhäkero on the Lake Pyhäjärvi shore hikers can see marks of the history of winter tourism in the Ounastunturi Fells in the 1930s. This was the site of one of the first ski resort hostels in the area. Now only its foundations are left standing.

The old Puolitaival forest ranger estate is situated west of the fells at the halfway point of the old postal trail running between Muonio and Hetta. Old trails lead there from the directions of Yli-Muonio and Kerässieppi. Today the network of forest roads leads towards the National Park from the west, and Puolitaipale lies 3 km from the closest forest road. It is a 20-km-drive along a narrow forest road to get to this starting point. There is also an open wilderness hut. 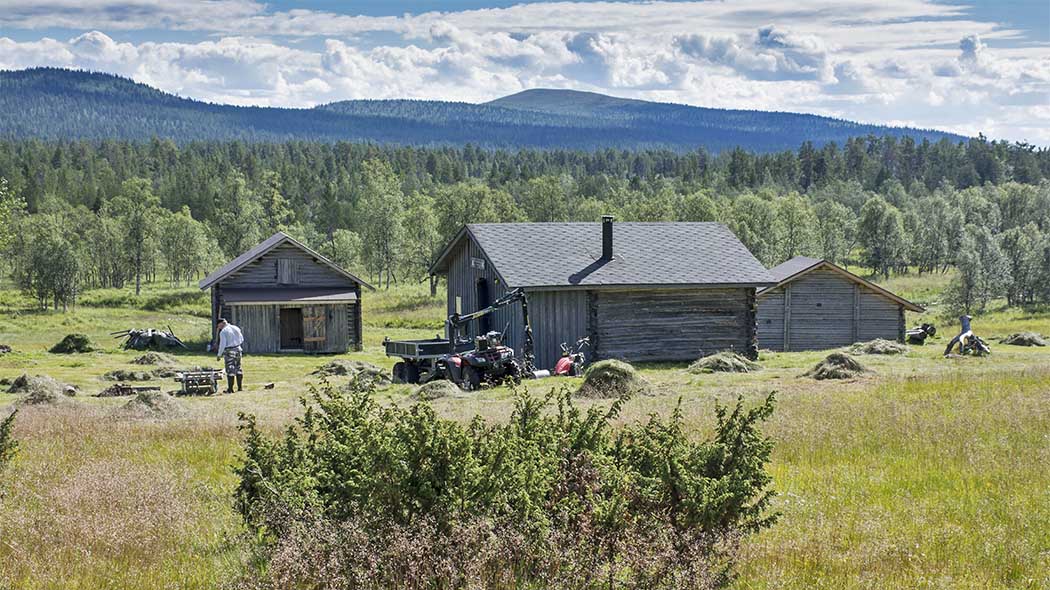 The meadow is also home to near-threatened species common moonwort and leathery grapefern, and other noteworthy species, such as Alpine bistort, globeflower, marsh grass of Parnassus, tall Jacob's ladder and sudetic mountain woodrush. Without regular mowing, the field will become overgrown.

An open wilderness hut at Tappuri is not used only by hikers, but also by reindeer herders on a regular basis. The Marasto reindeer fence is located close to the hut and some of the autumn's reindeer round-ups take place there. Tappuri can be reached from Ketomella, by an old path. The distance in one direction is about 8 km. There is also a new trail from Ketomella to Hietajärvi Lake, Pippokero Fell and Tappuri.

The National Park is bordered in the north by The River Ounasjoki. The river winds along the eastern side of the fells and continues towards Kittilä. The river was in the past an important travel route for locals and its importance has hardly diminished. Hikers can rest on the river banks, for example, at a Metsähallitus campfire site south of Ketomella or in the open wilderness hut of Sioskoski. Hikers can also try their luck at fishing, as grayling (Thymallus thymallus) and trout (Salmo trutta) bite easily. Salmon (Salmo salar), however, have not been able to swim up the river for decades. The River Ounasjoki is undammed and it is one of the north's only untamed rivers. 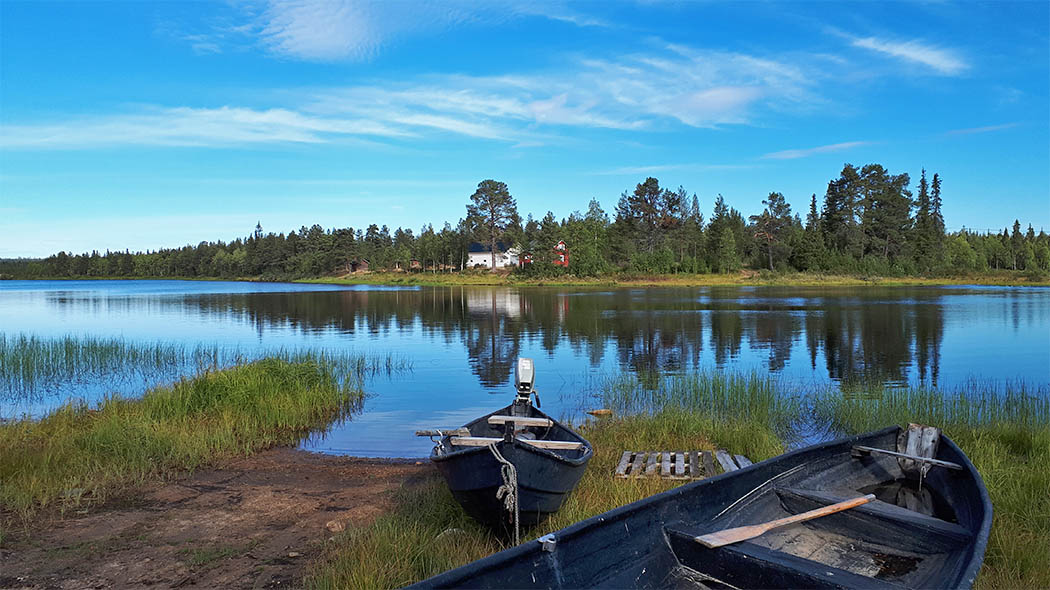