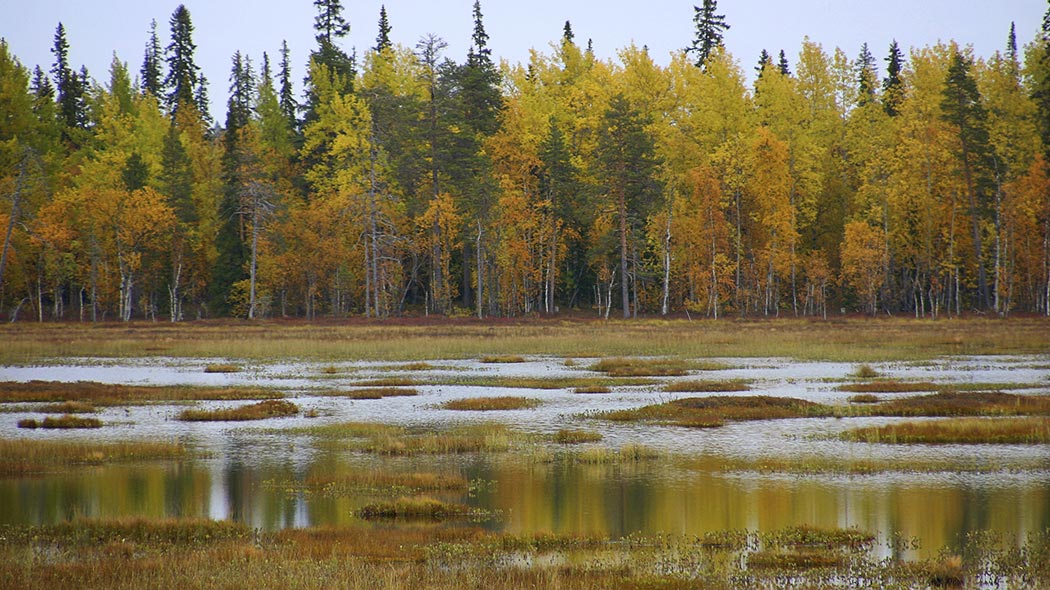 The Luiro Mires are comprised of Kairanaapa, Hirviaapa, Lämsänaapa, Sakkala-aapa, Sokanaapa and Sudenvaaranaapa. The mires are for the most part aapa bogs rich in minerals, except for Kairanaapa as well as Sakkala-aapa and Lämsänaapa, which are raised bogs. Aapa bogs, which are the collecting point for the surrounding area's run-off waters and are flarked, are typical of northern Lapland, whereas raised bogs are usually rare this far north. The Luiro Mires are unique in that northern Lapland's largest raised bogs can be found here. 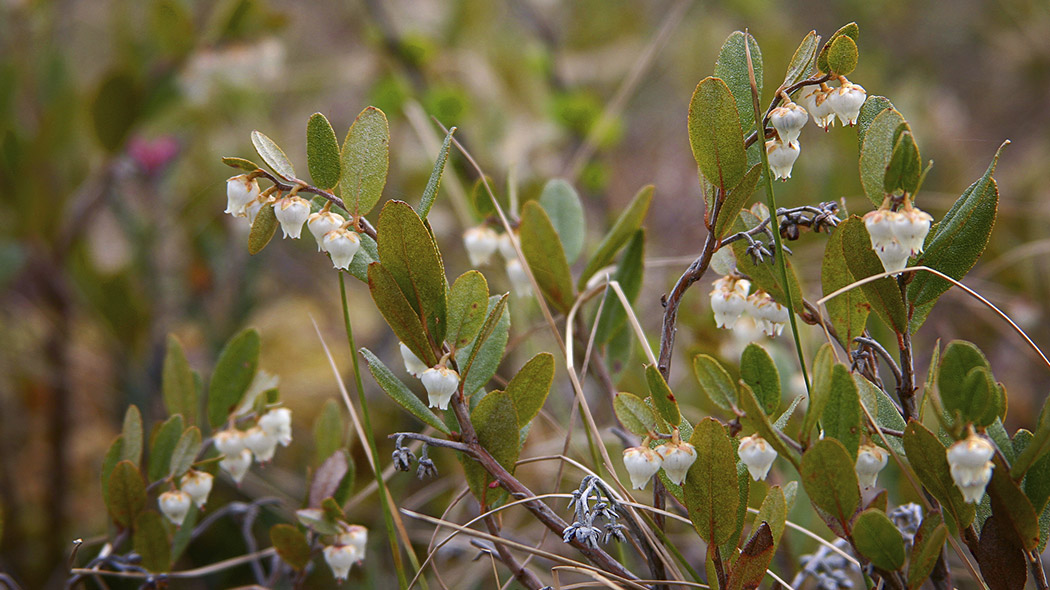 A distinctive characteristic of the Luiro Mires is the abundance of nutrients, which in turn makes it an ideal habitat for many rare and demanding vegetation species. Nutrient rich fens are usually a rare mire type in Finland, as there are naturally only a few and many have been cleared in place of fields. In the Luiro Mires, however, a third of the area's aapa bogs are fens, which makes the area extremely valuable from a nature conservation point of view. Especially birch fens are characteristic of the area.

Birch fens and diverse spruce and pine mires can all be found in Hirviaapa. Kairanaapa, which is on the west side of the River Luirojoki is rugged for the most part and there are only grassy flark fens and sedge fens in the northern and southern most ends of the mire. The north end of Sakkala-aapa is primarily made up of nutrient rich birch fens and the southern end of raised bogs. Also Sudenvaaranaapa is characterised by large birch fens, in which the threatened Marsh saxifrage (Saxifraga hirculus) has found a habitat. The area also has other rare vascular plants and mosses. Visitors to the Luiro Mires will witness the blossoming of many different orchids, such as the Early Marsh-orchid (Dactylorhiza incarnata ssp. incarnata).

During the later part of the last Ice Age the Luiro Area was covered by the Salla Ice Lake and after this by Lake Ancylus. The grooves along which runoff waters from the Rivers Luirojoki, Kitinen and Kemijoki flow are ancient river deltas, which were formed when Lake Ancylus withdrew. These old river beds have been found for example on the edges of Kairanaapa and Sudenvaaranaapa. In them peat can be up to 5 metres thick. These river beds still play a role in the way the mires function. During springtime floods they act as routes for runoff waters along which the water flows under embankments, which formed later, and this way spreads to a large area to have an effect on the mires' water economy and vegetation. The Luiro Mires are within the Lapland Greenstone Belt or the Central Lapland slate area, where volcanic rocks are a common characteristic.

The Luiro Mires are an extremely significant bird habitat on both a national and European level. Sightings of 94 bird species have been recorded in the mires and 41 of these species are those typical of wetlands. The eleven wetland bird species to nest in the area include northern species e.g. the Smew (Mergus albellus), as well as, those which are common in the entire country. The Mallard (Anas platyrhynchos), the Teal (Anas crecca), the European Wigeon (Anas penelope) and the Northern Pintail (Anas acuta) are common in the area's waters and flark fens, while the European Goldeneye (Bucephala clangula) is most abundant on river banks. The area's Bean Goose (Anser fabalis) and Swan (Cygnus cygnus) populations are strong. The Black-throated Diver (Gavia arctica) nests regularly at lakes in the Luiro Mires.

The Common Crane and Other Waders

The area's wader population is very distinctly northern as well. Of the seventeen wader species sighted in the area, including the Common Crane (Grus grus), about half are northern species. The area's bird population includes species such as the Broad-billed Sandpiper (Limicola falcinellus), the Jack Snipe (Lymnocryptes minimus), the Red-necked Phalarope (Phalaropus lobatus) and the Ruff (Philomachus pugnax). The most common wader in the Luiro Mires as well as in all of Finland is the Wood Sandpiper (Tringa glareola). There have also been sighting made of the Wood Sandpiper's close relative the Green Sandpiper (Tringa ochropus).

From Small Birds to Birds of Prey

Forty-four Passeriforme species have been sighted in the area, of which for example the Skylark (Alauda arvensis), the Meadow Pipit (Anthus pratensis) and the Yellow Wagtail (Motacilla flava) are typical of wetland areas. The area's abundant bird population has also brought predators there. Birds of prey, which can often be seen, include the Hen Harrier (Circus cyaneus) and the Short-eared Owl (Asio flammeus). The area's forested spots and forest islets add to the bird population's diversity. These offer a home to many species which thrive in forests, such as the Three-toed Woodpecker (Picoides tridactylus), the Siberian Tit (Parus cinctus), and the Siberian Jay (Perisoreus infaustus). 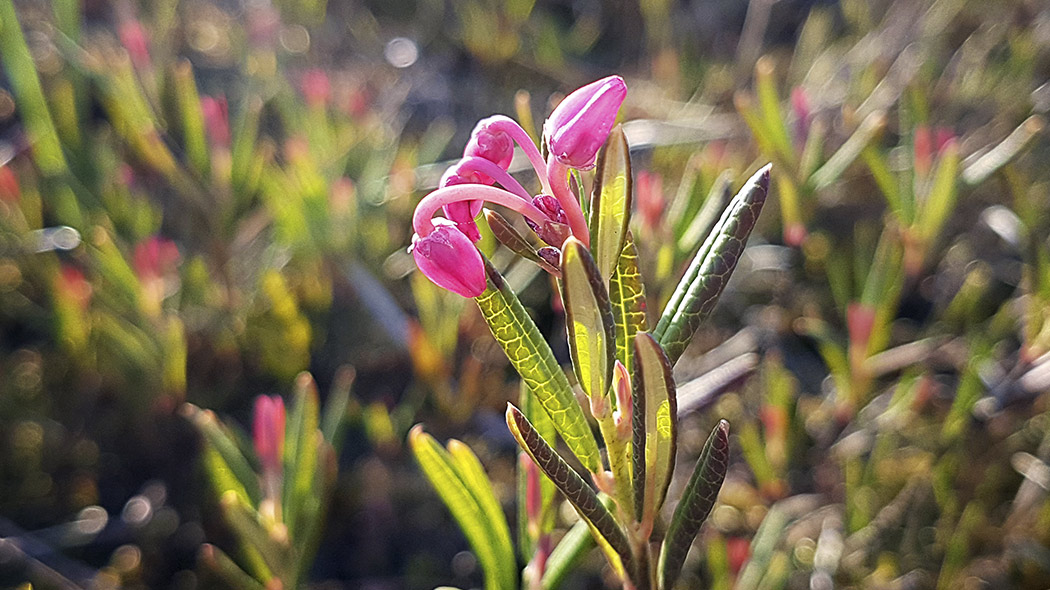