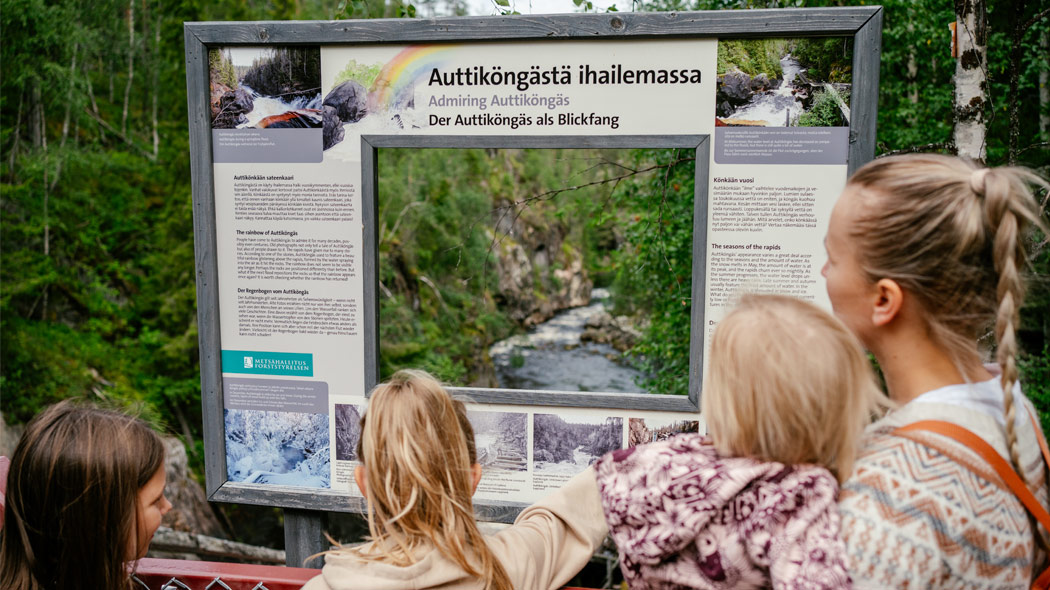 Auttiköngäs is a varying wilderness-like habitat and for this reason the fauna in the area is diverse. Of the large carnivores the bear (Ursus arctos) resides in the area permanently. There have been sightings of the lynx (Lynx lynx) as well in recent years. Finland's largest hoofed mammal, the moose (Alces alces), dwells on the banks of the River Auttijoki during winter. Abundant leaf tree saplings along the banks make-up an important part of the moose's winter diet.

The rare mustelid the otter (Lutra lutra) is a mysterious inhabitant on the banks of the River Auttijoki. In winter time it leaves behind winding tracks and sliding marks on down hill slopes in soft snow during its nightly outings. During winter grazing reindeer may fall from snow covered and icy cliffs. This usually ends fatally.

There is an abundant amount of birdlife in the area. The area's special feature is the White-throated Dipper (Cinclus cinclus), which nests during summer on the ledges surrounding the Auttiköngäs Gorge and spends it winters in spots where the waters do not freeze over as it fishes for its food. Many other bird species also nest on the ledges of cliffs at Auttiköngäs. Of these the most typical are the White Wagtail (Motacilla alba) and the Spotted Flycatcher (Muscicapa striata).

A rare bird which has been sighted at least once nesting at Auttiköngäs is the Grey Wagtail (Motacilla cinerea). During summer days the silhouettes of a pair of Golden Eagles (Aquila chrysaetos) can often be seen gliding over the forest and in the evening hikers often hear the call of the Northern Eagle Owl (Bubo bubo) near by in the forest.

As well as common fish such as pike (Esox lucius) and perch (Perca fluviatilis) there are also some valuable fish such as whitefish (Goregonus lavaretus), grayling (Thymallus thymallus) and brown trout (Salmo trutta fario) in the area's waters. Sometimes even a hook jawed lake trout (Salmo trutta lacustris) has bee spotted jumping in the pool below the waterfall as it tries to surpass impossible obstacles.

The area's vegetation indicates that it is part of the Northern Finland coniferous forest biome. The earth is moraine based and spruce trees with beard lichen hanging from them grow there. In the Auttijoki River Valley however the earth is sandy and the most common tree type is pine. The banks of the River Auttijoki and some streams are mainly lined by dense deciduous forest. 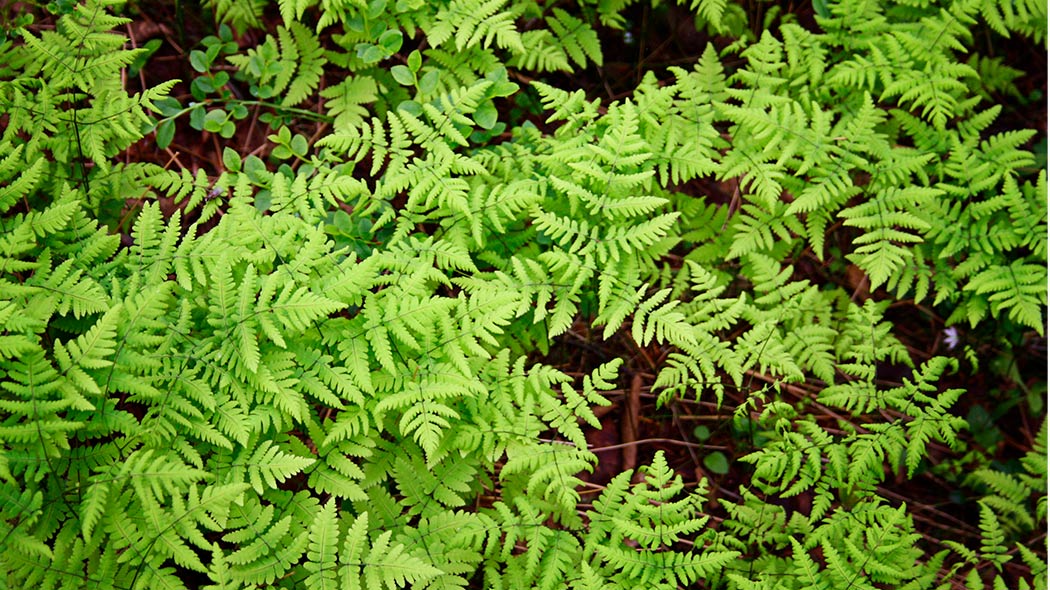 As the terrain is rocky the vegetation tends to be that of cliffs. Some plant species in the area are the Alpine Saxifrage (Saxifraga nivalis) the Brittle Bladder-fern (Cystopteris fragilis), the Rusty Woodsia (Woodsia ilvensis) and the Common Polypod Fern (Polypodium vulgare).

The area's vegetation brings colour to the area's considerable barrenness. Some rare plants in Auttiköngäs are the tall Jacob's ladder (Polemonium acutiflorum), the Lapland Buttercup (Ranunculus lapponicus), the European Black Currant (Ribes nigrum) and the Intermediate Wintergreen (Pyrola media). There are few plants which need calcareous earth to grow; practically the only one being the European Baneberry (Actaea erythrocarpa). 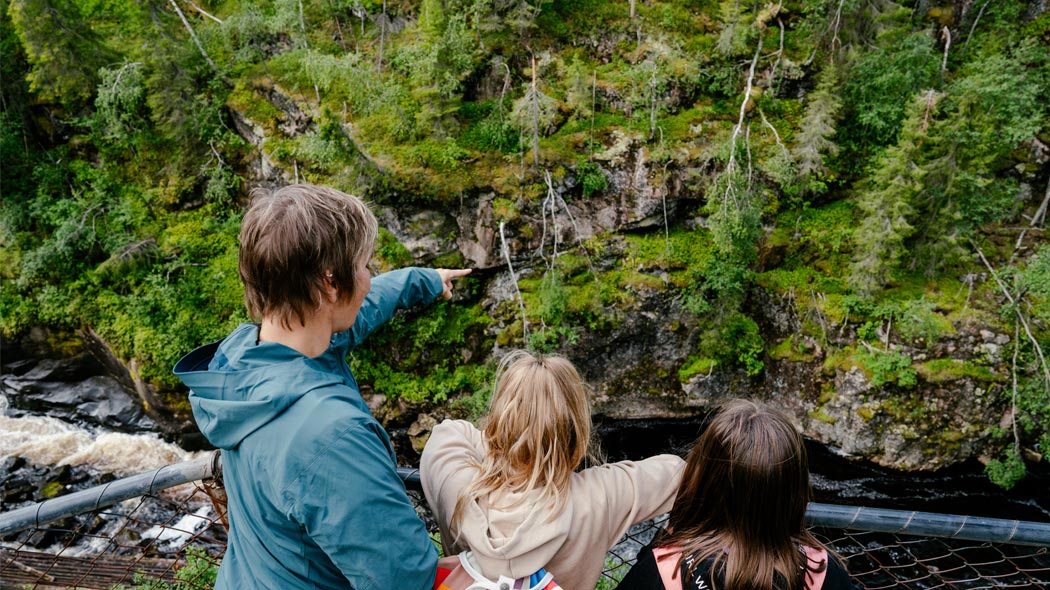 Violent earthquakes, which shook the area several million years ago formed a fracture line along which the River Auttijoki now flows. The same fracture zone includes the Lake Auttijärvi Valley and Korouoma Canyon. This fracture is part of the Kuusamo - Kolari fault and situated in-between two rock plates, which tend to shift even today.

Signs of those earthquakes, which took place millions of years ago, are clearly visible in the area. There is moraine on the slopes of hills and coarse and soft sand can be found on the ridges which line the banks of the River Auttijoki. These ridges were formed by the water which flowed through the area when the continental glacier melted.

After the continental glacier receded (around 9 000 BC) the Autti area was under the Yoldia Sea (around 8 000 BC), which was the second phase of the Baltic Sea. The slopes of Könkäänvaara Hill have shoreline steps between 180 m and 210 m above sea level. The shoreline for the third phase of the Baltic Sea, Ancylus Lake (around 6 500 BC) is visible today at 155 m above sea level. 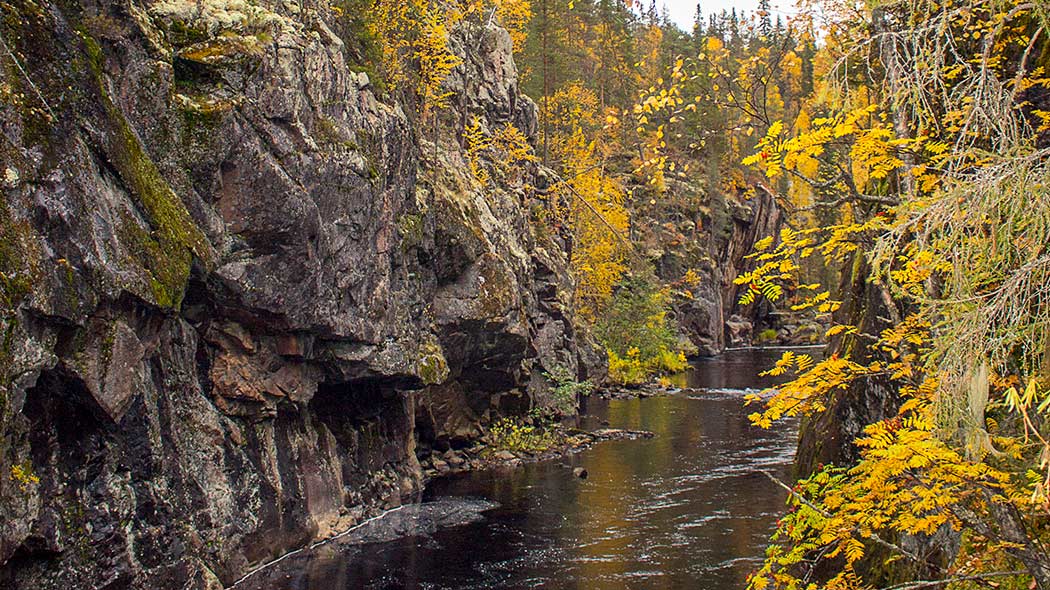