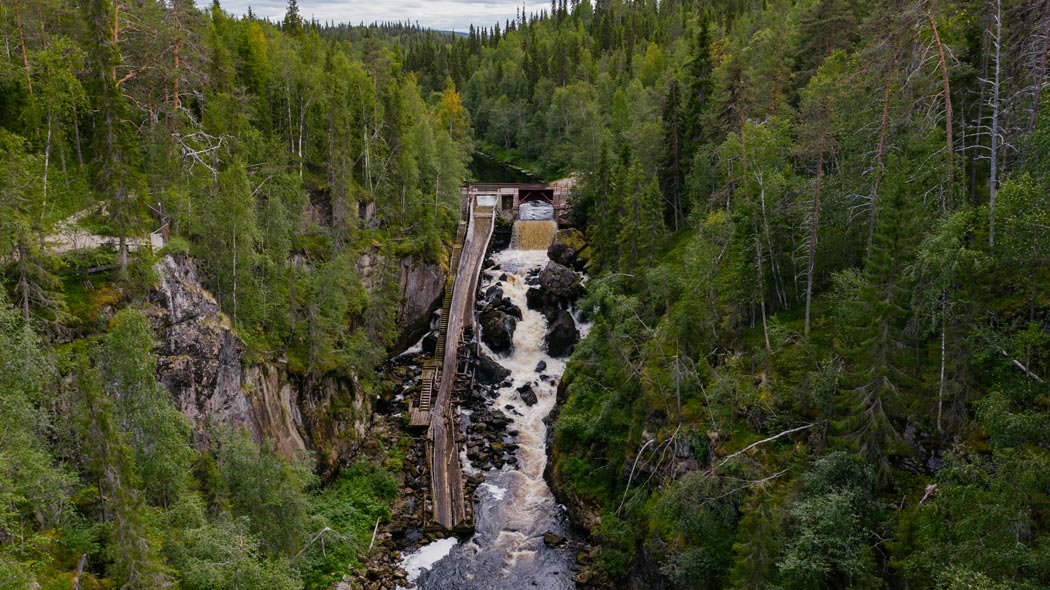 The three hunting pits found at Auttiköngäs are clear signs of human activity in the area during prehistoric times. The hunting pits are located in typical places at the point where the River Auttijoki and a smaller stream meet and have been dug into the sandy earth on the river bank. The hunting pits were deep at the time they were in use, but as time has passed sand from the surrounding has run into the traps and filled them. Today they are mere dents at 1 metre deep. Many an unsuspecting animal fell into these traps when they were disguised.

As it is impossible to float logs down Auttiköngös Falls because it is so steep and rocky, a flume was built beside the waterfall through which logs were directed. To ensure that there was enough water in the flume a dam was built up-stream from the falls to raise the water level. A gate at the entrance to the flume could be opened and closed as needed. This way the flume never got too full. During their spare time log floaters have carved their initials and dates into the ravine's steep cliff walls. Engravings have been found in many places below the waterfall.

The first mention of the log-floating flume was found in a document from 1889. This is when the plan for the flume was approved. After this Metsähallitus has fixed up the flume and the dam for instance during 1939 and 1965 - 1966. Today log floating does not take place anymore, but the structures at Auttiköngäs Falls are preserved as a cultural heritage sight. 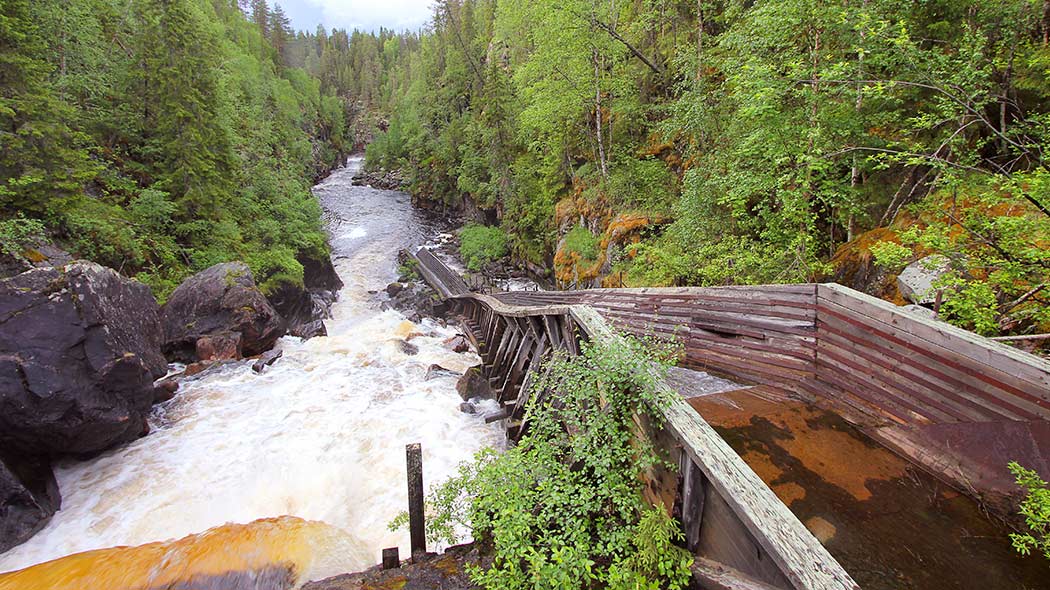 The River Auttijoki is part of an old trade route from White Karelia in Russia through the Kuusamo lake highlands via Posio to the mouth of the River Kemijoki. It was used by people from Karelia and Kainuu regions, and even from Norway on their trade trips and pillaging expeditions.

This route was an important path for attacking armies during the 25-Year War between Finland and Russia (1570 - 1595) and the Great Northern War (1713 - 1721). It was probably also the route that Pekka Vesainen (a front man for a peasant uprising) and his troops took during their pillaging campaign through the area of Pechenga at the end of the 16th Century.

Later on trades men stopped at and often spent the night at the Autti Inn. Row boats were the most common form of transport and they were filled with goods to trade. The waterfall was passed by carrying supplies to a boat waiting on the other side of the falls.

According to word of mouth quite a few people have drowned in the River Auttijoki throughout the river's history. A local tale tells that Jussi Jokela from Rovaniemi was only shaken after tumbling down the waterfall. He was then fished out of the pool below by his rescuers. It's said that Jussi only had scrapes and bruises along his sides. The pockets of his pants had however turned inside out, which is how he lost much money. He made up for this loss later by marrying a rich widow from Oikarainen.

It is evident that German soldiers inhabited the area during the Continuation War in 1940s. German soldiers had their prisoners build their defence line. Many remnants of this defensive line can be found on the banks of the River Auttijoki especially west of Auttiköngäs Waterfall on both sides of the road leading to Posio. All in all around 50 ruins of trenches, shooting holes and dugouts have been found here.

Another remnant of the Continuation War is the grave of a Russian prisoner of war at Auttiköngäs parking area where the winter road begins. According to villagers this soldier and his comrade escaped and he took shelter in a loggers' cabin by the waterfall and was shot there by Finnish soldiers in a shootout.