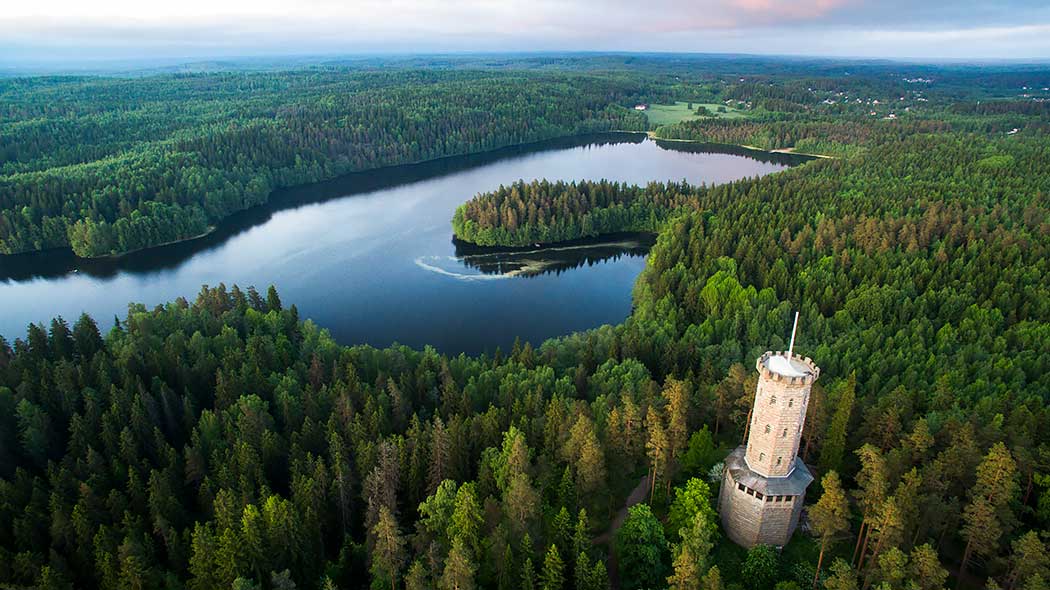 Aulanko Nature Reserve brings nature and culture together in a national landscape. The English-style park provides the opportunity to see nearly all the hardwood trees that grow naturally in Finland. 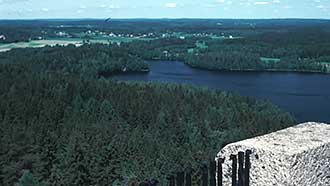 Lift up your spirits and make yourself fitter by climbing to the top of the Aulanko observation tower.Enjoy the picturesque lake scenery. Read more > 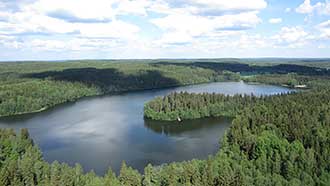 The national landscape of the valley of Lake Vanajavesi

Jean Sibelius, Eino Leino and many other famous Finnish artists were inspired by this national landscape.
Read more > 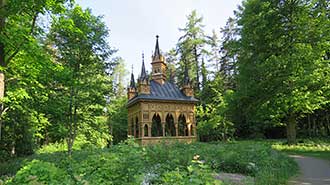 Become fascinated by the lushness and romantic architecture of the Aulanko Forest Park. The lush forests are home to more than 140 tree and shrub species. Read more > 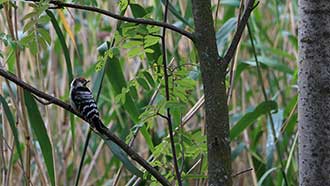 The tapping of woodpeckers, the hooting of owls

The lush forests of Aulanko are home to many bird species, such as the lesser spotted woodpecker, nutcracker, tawny owl and goldcrest. Read more > 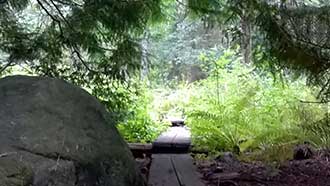 Experience the serene and dusky atmosphere of the cedar forest. The giant leaves provide visitors with shade on the sunniest summer days. Read more > 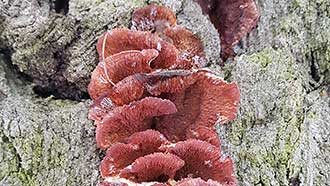 Storm trees are a cradle for natural diversity

Trees knocked over by storms are left in the forest. Many different types of fungi, such as anise mazegill, grow on decaying trees. Read more > 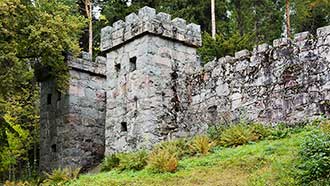 Historical buildings are being maintained in order to preserve the cultural heritage for future generations. Read more > 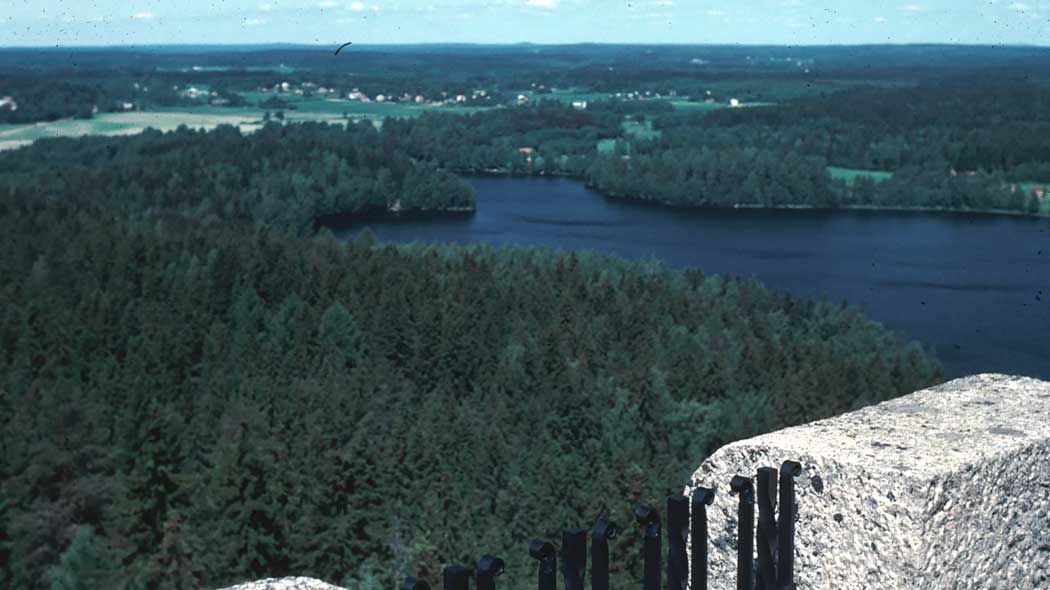 The rugged and rocky Aulangonvuori Hill, a fixed relic site (Iron Age fortification) protected under the Antiquities Act (295/1963), rises from the shore of the lake. It is about 150 metres from sea level and about 70 metres above the level of Lake Aulangonjärvi. Aulangonvuori used to be part of a chain of beacons and fortifications in the regions of Häme and Pirkanmaa. A magnificent view opens from the top of Aulangonvuori towards Lake Aulangonjärvi and Vanajavesi valley, one of Finland’s national landscapes.

The National Landscape of the Valley of Lake Vanajavesi 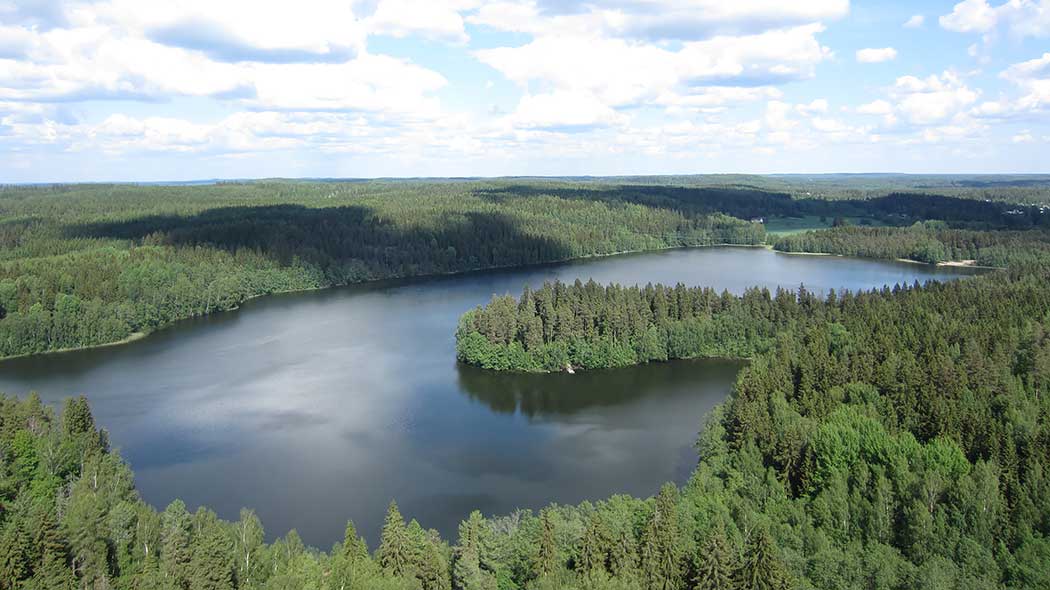 Aulanko is an essential part of the valley of Lake Vanajavesi, and the nationally valuable landscape area. For more than a century, visitors have admired the view from the scenic lookout tower of Aulankovuori Hill over Lake Aulankojärvi and its verdant eastern shore. The wilderness-like forested landscape has always inspired artists. It is believed that the famous Finnish composer Jean Sibelius was thinking about this scenery of his birthplace when he composed "Finlandia", which is probably the most widely known of all his compositions. Many other great Finnish artists, such as painter Akseli Gallen-Kallela and poet Eino Leino, spent time in the area.

Union between Nature and Culture in the Landscape

The core of the national landscape area is Lake Vanajavesi with its bays, rocky islands and capes. The rich cultural heritage is an important part of the national landscape. The area has been continuously inhabited and cultivated from the prehistoric times until today, which has shaped the landscape: the traditional land use with the various field and meadow patterns and dwellings can still be seen in the area.

The valley of Lake Vanajavesi is full of history: the estates with their gardens and grounds, the medieval church of Hattula and the castle of Häme. The church of Hattula was built in the 1300s, at the same time as the brick walls of Häme Castle. The granite castle was originally built in the end of 1200s, to protect the region of Häme and the rest of the country. During the Catholic era in Finland, Hattula Church was one of the most important destinations for pilgrims.

The dissertation of photographer Taneli Eskola (1997), "Water Lilies and Wings of Steel - Interpreting Change in the Photographic Imagery of Aulanko Park", outlines the foundation of the identity of Finnish landscape, and the change in tourism culture. In this study, travelling and photography have intertwined.

Aulanko area is located on the southern boreal forest zone, where lush and barren types of forest alternate. However, the landscape of Aulanko is exceptionally lush, and inside the nature reserve it is possible to find almost all the hardwood species naturally growing in Finland. A wide variety of wild shrubs also grows in the area but the large number of sturdy spruce forests is the most distinctive feature of Aulanko. 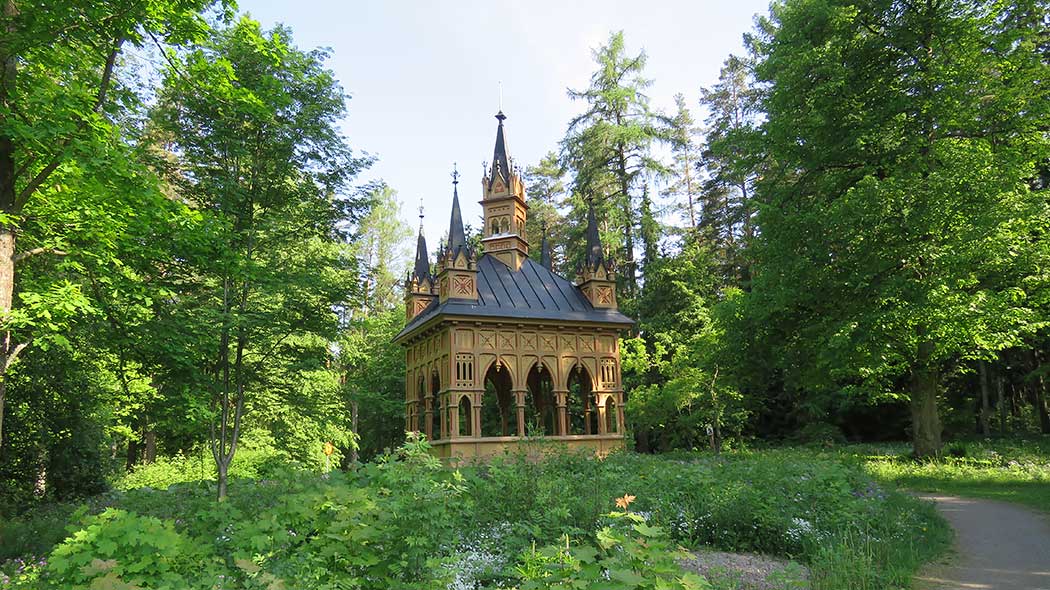 The flora in Aulanko Nature Reserve has been enriched not only by the nutritious soils but also by planting different trees in the beginning of the last century. There are more than 140 species of trees and bushes in Aulanko. Specialities of the area include the small forests of foreign tree species and the Curly birch (Betula pendula var. carelica). The Rowan (Sorbus aucuparia) forest, which has naturally formed near Ruusulaakso pavilion, is also unusual because there are not many pure Rowan forests in Finland. Of the planted trees, especially the firs (Abies Mill.), the larches (Larix sp.), the Douglas Fir (Pseudotsuga menziesii), the Linden (Tilia), the Norway Maple (Acer platanoides), the Common Ash (Fraxinus excelsior) and the Wych Elm (Ulmus glabra) have survived well. Blue-berried honeysuckle (Lonicera caerulea) is one of the introduced ornamental shrubs thriving in the area.

Demanding plant species growing in herb-rich forests and heaths and the abundance of grasses and herbs are typical of the ground vegetation in Aulanko. Mountain snowbell (Soldanella montana) is a rare and seldom-spotted newcomer growing in the nature reserve. It has found its way to Aulanko with tree saplings imported from Central Europe. It is difficult to overlook the uniform white and blue fields of blooming blue and wood anemones in spring.

The landscape surrounding the protected area is also luxuriant. Rare and protected plants such as the European White Elm (Ulmus laevis) and the Eastern Pasque Flower (Pulsatilla patens) grow there.

The Tapping of Woodpeckers, the Hooting of Owls 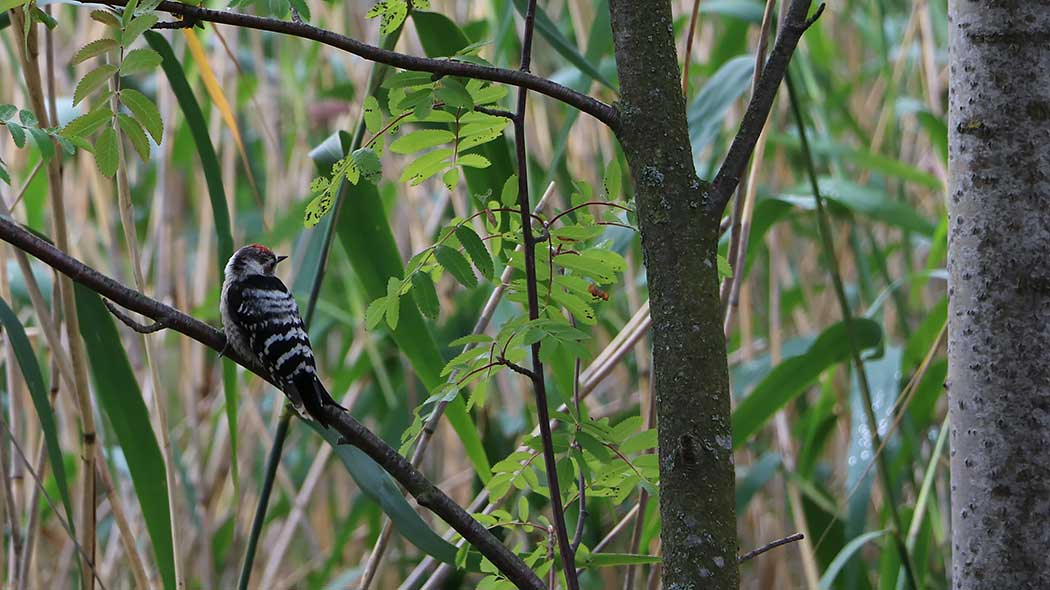 In addition to a wide variety of different bird species, Aulanko is also home to all common mammals occurring in Finnish nature, such as red squirrels, common hares, mountain hares and white-tailed deer. In the forest, you may find traces of bats, weasels, stoats, martens and raccoon dogs. Badgers and foxes also inhabit Aulanko and flying squirrels have been sighted in the nearby areas.

The Cedar Forest at Aulanko

The cedar forest at Aulanko Nature Reserve is one of the pearls of the region. The forest where northern white-cedars (Thuja occidentalis) and western redcedars (Thuja plicata) grow creates a dusky fairy-tale atmosphere. The largest of these cedars, which grow wild in North America, have been growing here undisturbed for more than 100 years. Their large and lush branches provide shade on a sunny day. The lack of light and the cedar’s acidic plant litter prevents the emergence of almost all undergrowth, which makes the forest very cool in the summer. 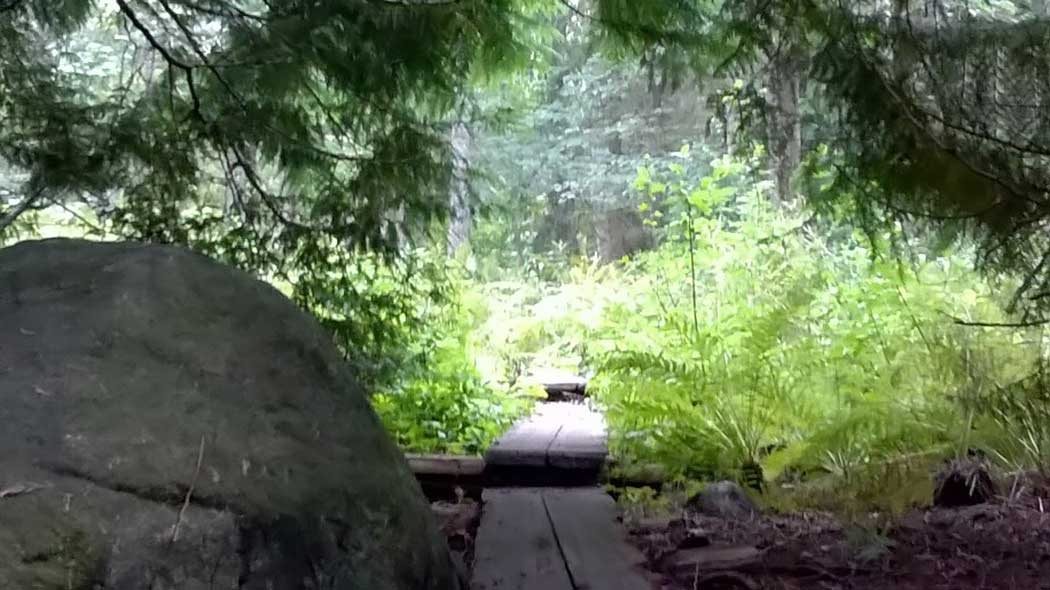 A board-walk begins from Ruusulaakso and leads visitors to the fragrant cedar forest.  The creek that originates from Metsälampi spring, babbles under the board-walk especially in the spring. Visitors wandering in the cedar forest get many wonderful sensory experiences.

Storm Trees are a Cradle for Natural Diversity 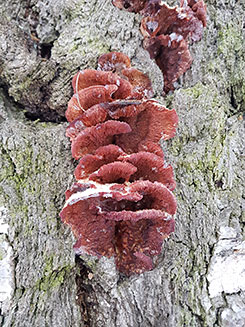 Storms have swept over Aulanko over the years, felling a large number of trees. The fallen trees are important habitats for thousands of forest species thriving in decaying trees and for this reason, trunks have been left in the natural forests of the area to enrich their diversity. The areas ravaged by storms are allowed to become forested in a natural manner.

For example, in November 2001, the Aulanko Nature Reserve was hit by the storm Janika, which felled a large number of trees, including a small forest. In the area, marks of the storm can still be clearly seen.