History of the Rapola Hill Fort

Rapola boasts the largest and most famous ancient hill fort in Finland, built in the Viking Age. Below the Rapola Hill Fort, there is a unique and extensive area of relics from the Iron Age, including an ancient field, sacrificial or cup-marked stones and burial grounds.

Early Habitation: People Settle in Rapola
The Middle Ages: Wealthy Villages
The Vendel Period and the Viking Age: the Ancient Hill Fort is Built on the Ridge
The Modern Period: Tourism and Management of Cultural Heritage

Small-scale cultivation was practised in the Rapola area as early as in the late Bronze Age, more than 700 years before the Christian era. Finds from this era include textile ceramics and other shards of clay pottery.

It is uncertain whether Rapola was inhabited during the first centuries of the Christian era. The oldest burial grounds in the area – Matomäki and Hirvikallio – date back to the 5th and 6th centuries. They prove that the northern shore of Lake Vanajavesi was permanently inhabited then at the latest.

The objects found in the burial grounds indicate that people in Rapola had contacts with faraway corners of the world through trade. For example, the items found in Hirvikallio include a bronze watch necklace similar to those found far away in the Oka and Kama river area in Eastern Russia.

The Vendel Period and the Viking Age: the Ancient Hill Fort is Built on the Ridge

In the Vendel Period, i.e. during the 6th to 8th centuries, the people in Rapola started to bury their dead in the Rupakallio level-ground cemetery. Most of the finds in this burial ground date back to the Viking Age, i.e. to the 9th to 11th centuries. The ancient field in Rapola has also been dated to the early Viking Age. On the basis of charred grains found in the area, it is known that people in Rapola grew barley, in particular, but also wheat, oats and rye.

Relatively little is known about the religion of Iron Age people. Interesting remains of pre-Christian religions include sacrificial or cup-marked stones that have small depressions carved into the rock surface. Possibly the cups were connected with beliefs relating to the dead and agriculture. At least four sacrificial stones have been found in the Rapola ridge area.

In the Viking Age, the Rapola ridge was fortified into a hill fort, probably as part of a chain of hill forts on the shores of Lake Vanajavesi. The crest of the ridge was surrounded by an approximately one-kilometre long construction, mainly made of wood. All that now remains is a low wall consisting of supporting and foundation stones. The wall had at least three gates. Near the walls, there are mounds of stones interpreted as stones for throwing and a dozen large foundations of stoves. In addition, approximately 90 depressions interpreted as foundations of dwellings have been found on the ridge.

The Rapola Hill Fort was most likely still used in the Middle Ages. The fortification has inspired the imagination of researchers, and in the 20th century, some even regarded it as the central castle of the people in Häme. Today, more cautious interpretations of the importance of the fortification are presented. It is possible that the hill fort has been used for short periods at different times, and its purpose of use has probably also varied. A better understanding of the importance of the fortification would require extensive archaeological investigations – excavations have only been carried out in part of the area. 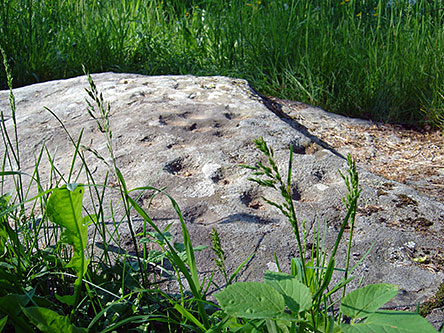 Rapola and Voipaala were important, wealthy villages in the Middle Ages. They were mentioned in written sources for the first time in a bull issued by Pope Benedict XII in 1340. In the bull, an interdict was imposed on 25 Sääksmäki people who had refused to pay their tithes, i.e. they were excluded from most rites of the Church until they expiated their offence. These included six men from Voipaala and three from Rapola.

At the turn of the Middle Ages and the Modern Period, there were seven houses in Rapola and as many as twelve in Voipaala. The ridge, including its hill fort and the remains of old dwellings, was part of the villages' local forest, which they used as a source of fencing, timber and firewood and as a forest pasture for livestock.

The Modern Period: Tourism and Management of Cultural Heritage

The rugged landscape of the Rapola ridge has attracted tourists since the mid-1800s. The first visitors were interested in the spectacular views over Lake Vanajavesi and the wild natural environment. The fascinating past of the place as part of the history of the people in Häme also contributed to its popularity. Some tourists regarded the hill fort even as the castle of the king of Rapola. The visitors included Axel Gallén-Kallela, a famous Finnish painter.

Intensive study of Rapola also started as early as in the 19th century. Today, the area is protected under the Antiquities Act and the Nature Conservation Act, and is managed by Metsähallitus Parks & Wildlife Finland. It is important to restore and maintain the open field landscapes and heritage landscapes and to protect the relics, the built cultural environment and the rare natural features of the area.