Katanpää - formerly an island for prisoners and conscripts - has become a valuable cultural historical sight favoured by holidaymakers.

The location of Katanpää was strategically significant for a long time, as from there it was possible to control all three navigation routes running through the Archipelago Sea. Katanpää was used as a naval port as early as the 19th century. The Katanpää fortress is the northernmost part of the largest fortress chain in the Baltic Sea constructed by Nicholas II of Russia in the 1910s. 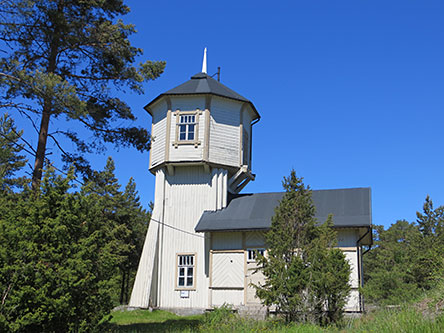 The old buildings on Katanpää were extensively renovated by the Finnish Defence Forces in the mid-1980s. The fortress is protected under the Antiquities Act and care must be taken when walking in the area - both for personal safety and for the protection of the fortress equipment.

Although Katanpää no longer has any military significance, it is a valuable cultural historical site that is highly valued by boaters. The island has become a destination favoured by holidaymakers, and several thousand visitors per year. Katanpää is the southernmost destination in the Bothnian Sea National Park, which was established in July 2011.

Katanpää can only be reached by water.

This is the webpage www.nationalparks.fi/katanpaafortressisland