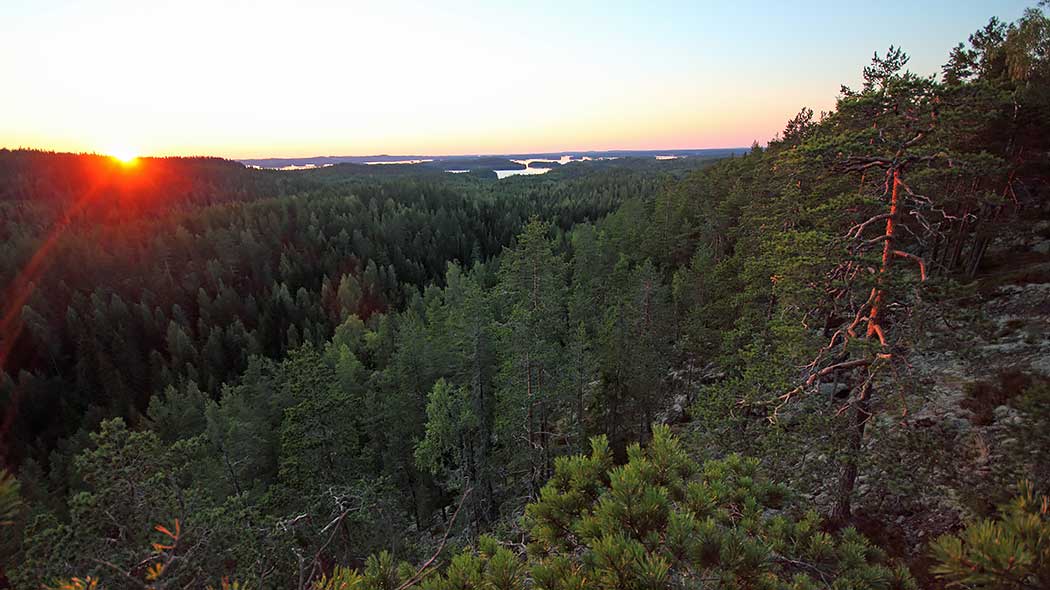 The southern Konnevesi National Park is home to lakes, sheltered mazes of islands and large altitude differences. The majestic mountainous landscape hides away sturdy aspens and lush vegetation. The clear waters of Konnevesi are the kingdom of ospreys and lake trouts. 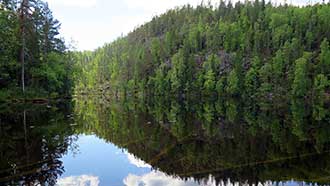 A mix of rugged vertical rock walls and lush groves

Steep rock faces change into glens covered with vegetation and sturdy aspens (Populus tremula). The hill of Kalajanvuori rises 77 meters above the nearby pond. Read more > 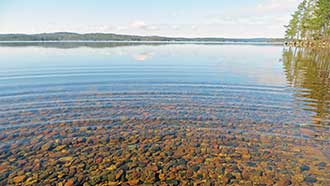 Konnevesi, the central lake of the Rautalampi trail, is a vitally important habitat of the brown trout. The waterway is still in its natural state. Read more > 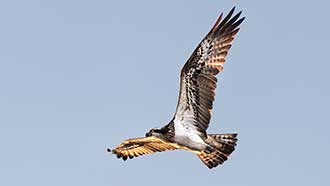 The regional emblem of Southern Konnevesi National Park, the osprey (Pandion haliaetus) builds its nest on the top of a pine tree. Read more > 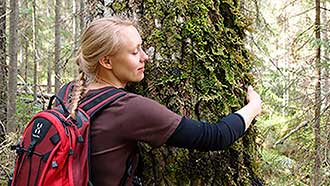 Aspen – the tree of life

The aspen promotes biodiversity by providing a habitat for numerous insects, mushrooms and lichens in old natural forests. Read more > 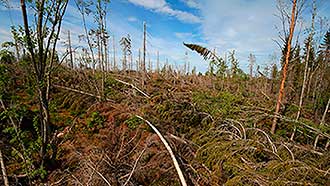 A storm named Asta swept over Konnevesi in July 2010. The park’s fallen trees are mostly the result of the storm. Read more > 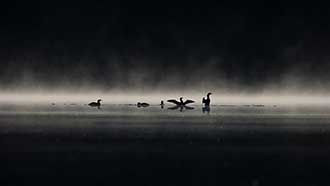 The waterways of Rautalampi have been used for a long time. Stone-age settlements and rock paintings have been found in the area. Read more > 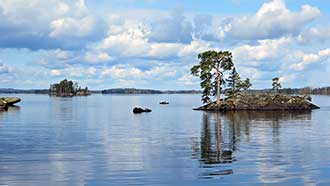 Landing on small islands and islets is forbidden between 15 April and 31 July. Let’s give the birds some space to nest in peace. If an osprey leaves its nest, you’ve gone too close. (www.metsa.fi) 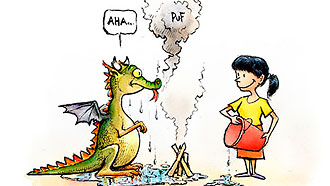 A combination of rugged vertical rock walls and lush groves

Southern Konnevesi is full of contrasts: wide stretches of open water exist side by side with the hilly landscape of Northern Savo. A few steps from the rocky shores you find yourself in the middle of lush herb-rich forests. In the large mainland section of the national park on the eastern shore of the lake, lush herb-rich depressions alternate with steep-sloped clifftops decorated by lichen and shield bark pines. Ancient natural forests have been preserved in the shelter of the hillsides, where giant bark-stemmed aspen trees are an ideal habitat for a large number of threatened species, including the bear (Ursus arctos), the lynx (Lynx lynx), the flying squirrel (Pteromys volans), three-toed woodpecker (Picoides tridactylus) and a variety of threatened insects that thrive on rotting wood. 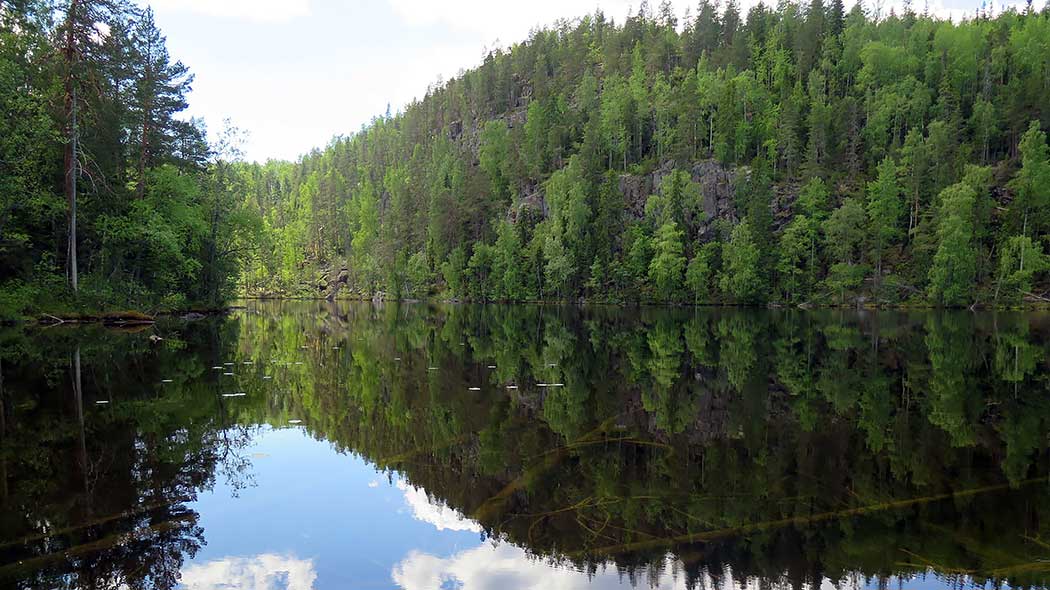 Bedrock in the area also contains alkaline rocks. Partly as a result, Enonniemi and many of the islands boast herb-rich forests that are home to wood vetch, spring pea, baneberry, big lime trees and other demanding species typical of herb-rich forests. The protected and regionally endangered snow saxifrage (Saxifraga nivalis), usually found in the fells of Lapland, is one of the specialities of the hilly terrain.

Southern Konnevesi, the lake surrounding the national park, is the clear-watered central lake of the unregulated Rautalampi waterway. The cool lake waters of Southern Konnevesi are of excellent quality and among the key habitats of the wild brown trout (Salmo trutta lacustris) in southern Finland. The deepest known point of the lake is 57 metres. The bedrock in the Southern Konnevesi area is ancient, and over the course of time, various fractures, depressions and faults have created a ragged shoreline, with headlands and long coves being typical of the lake. The lake is dotted with hundreds of islands and islets. 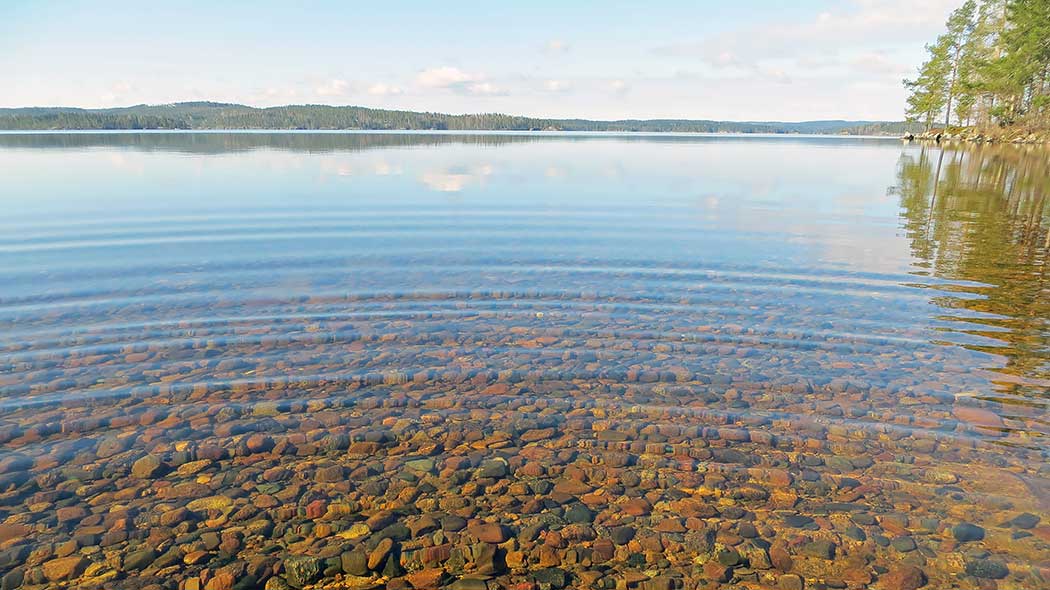 Southern Konnevesi is surrounded by free-flowing rapids on both sides: Konnekoski to the east and Siikakoski to the west. The lake is a significant nesting and resting area for waterfowl. Explore Southern Konnevesi by travelling on the lake, wildlife watching or fishing. You can find the best known sandy beach of the lake on the Iso-Pyysalo island.

This large bird of prey, known as osprey, occurs in all parts of Finland. The osprey population in Southern Konnevesi is the densest in Central Finland and as many as 20 pairs nest in the national park. The osprey winters in Africa and returns to its nest in April after the lake ice has melted. This bird feeds almost exclusively on fish. It dives into the water feet and head first and grabs a fish with its talons. 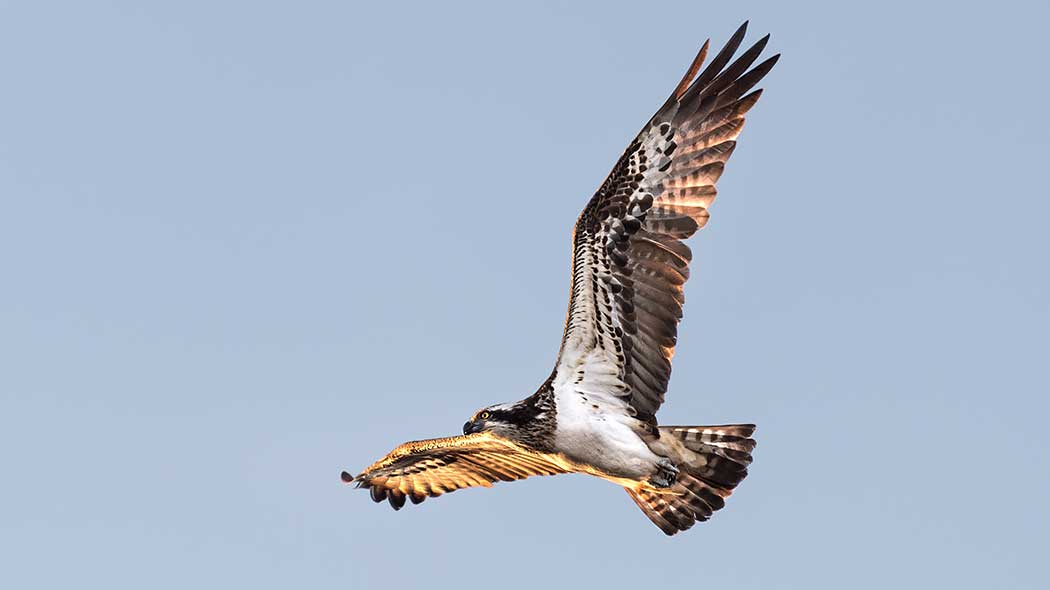 Ospreys mate for life and build a large nest out of sticks, usually in the top of a pine tree. The birds have unobstructed access to the nest and it also provides an excellent view of the surrounding areas. The tree must also be extremely sturdy because over the years, the nest may grow into a structure weighing hundreds of kilos. A lack of suitable nesting locations is a problem for the osprey. The nesting tree of an osprey is always protected. Artificial nests have been built in the Southern Konnevesi area, and the birds have successfully reproduced in them. Ospreys must be left undisturbed during the nesting season. If the bird takes off from its nest, you are too close.

Aspen - the tree of life

In shielded slopes, there are old natural forests where huge bark-trunked aspens are home to many endangered species. Aspen (Populus tremula) is a key species in Finnish forests, providing a habitat for a rich variety of insects, lichens and polypores. Old decaying and hollow aspens are particularly important in terms of diversity. 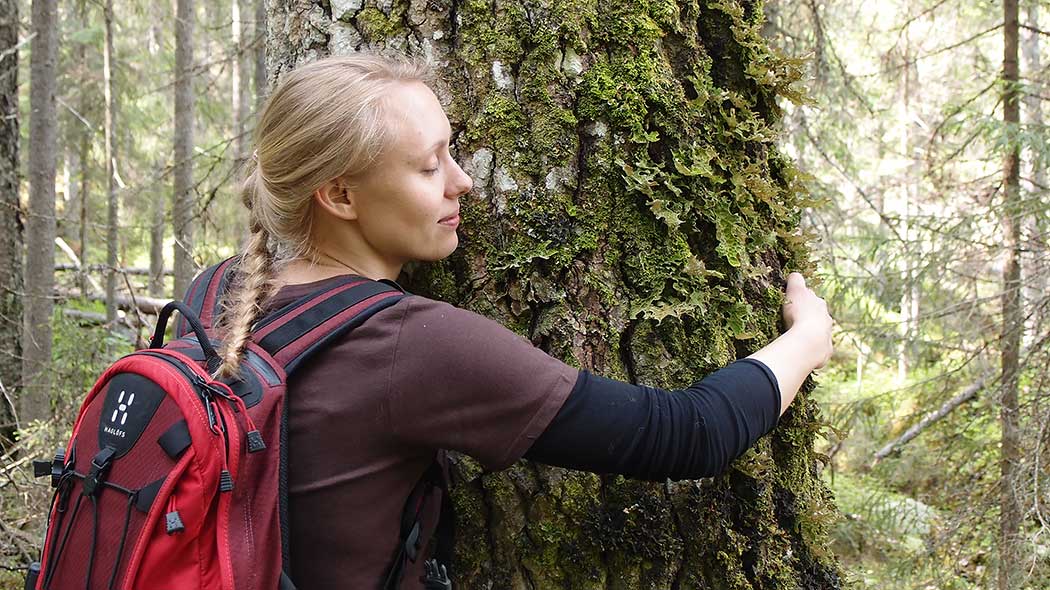 Aspen is also important to vertebrates. Aspen and the species supported by it also provide food for woodpeckers, flying squirrels and many game species. It is easy for woodpeckers to carve a nesting hole into soft aspen wood. Other hole nesters can use the old holes made by woodpeckers as their homes.

Southern Konnevesi National Park is home to an extremely rich variety of species relying on aspens. This shows that the area has a good continuum of aspen; there are always trunks of the right age, living or dead, available to species relying on aspens when the previously used trunks have decayed too much. The aim of the ecological management measures now under way in the national park is to ensure that young aspens can grow into larger trees of life.

The Asta storm in 2010 left a special trace in the national park. The downbursts of the storm swept over Rautalampi and Konnevesi, felling a large number of trees on the islands and mainland. 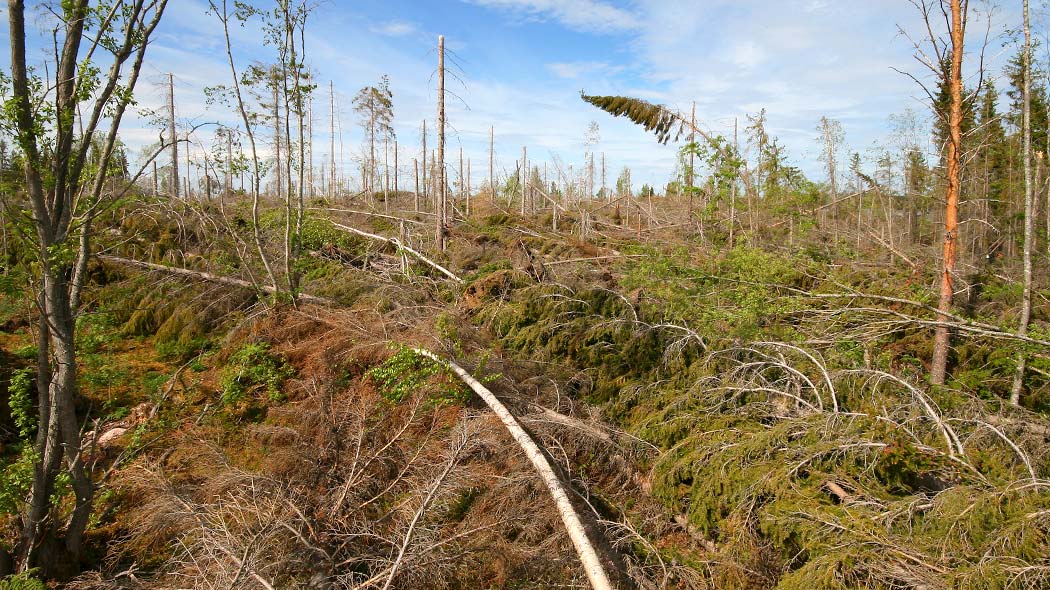 The island of Iso-Häntiäinen, where the trees were almost completely destroyed by the storm, was restored through burning in 2012. It is interesting to observe how rapidly the forest regenerates on the island after the fire. 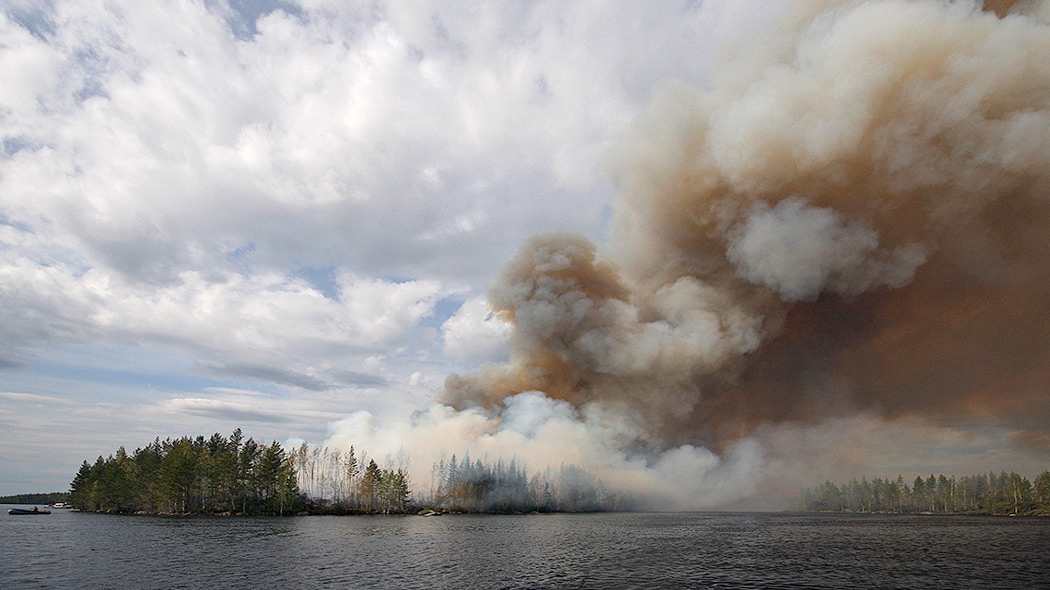 The Rautalampi route has been an important waterway since prehistoric times: Stone Age residential sites and a burial mound dating back to the early Metal Age can be found on the shores of lake Konnevesi. Even today it is one of Finland's few long unregulated waterways. The route originates in the small mires and ponds of Northern Savo and ends in Lake Saraavesi in Laukaa in central Finland. In the south-eastern part of the park in Toussunlinna, you can find one of Northern Savo's rare rock paintings. The memorial trees on the Pohjois-Lanstu island tell us about 19th-century belief in the afterworld. 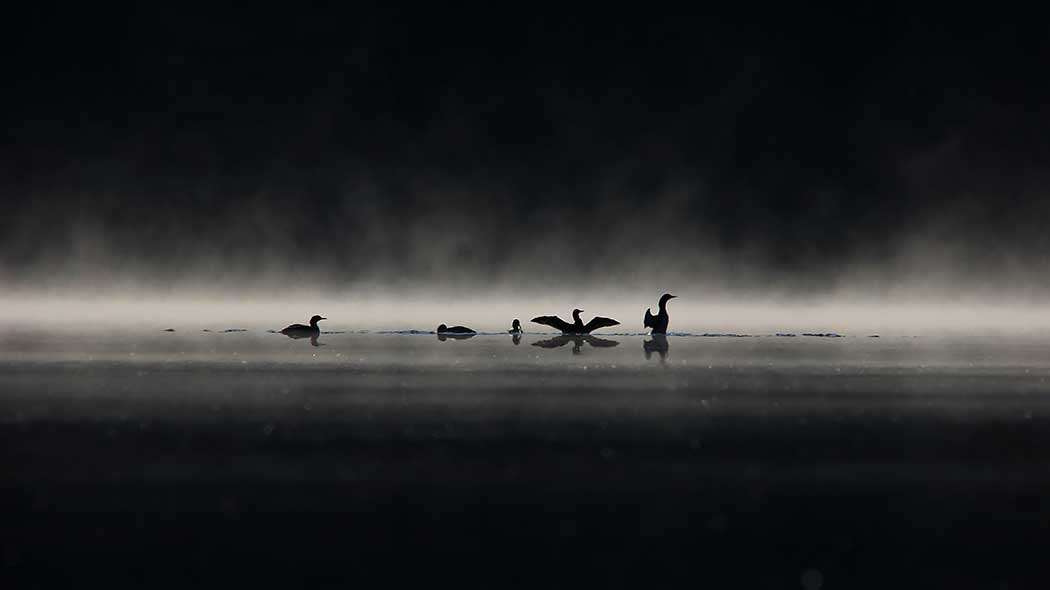 The emblem of Southern Konnevesi National Park is osprey.