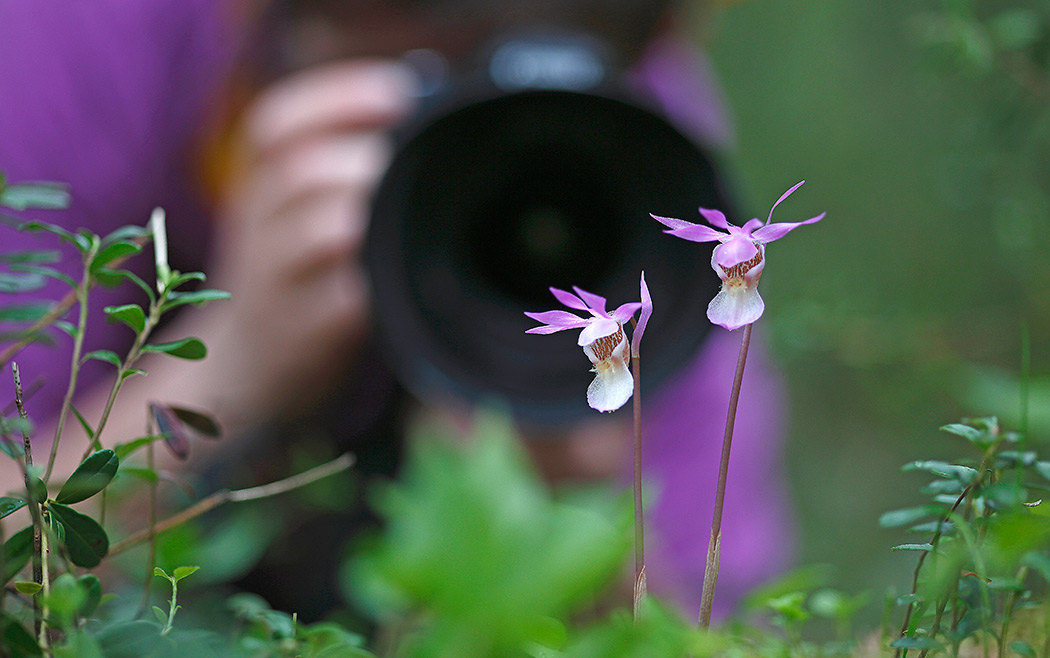 Hikers will be surprised by the natural diversity in Oulanka National Park. High cliffs give way to mires and soft sandy beaches to lush forests. Does Oulanka have Finland’s most species-rich nature? 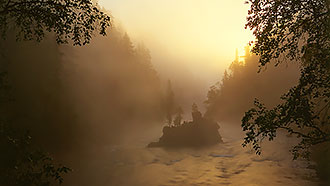 Experience the different shades of nature during all the seasons. You’ll feel like a tiny part of the great spectacle of life when surrounded by the national park. Read more > 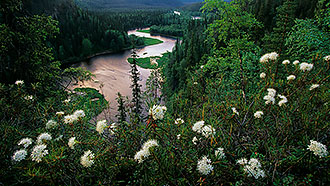 The Rivers of Oulankajoki, Kitkajoki…

Foaming rapids and spectacular waterfalls. Rivers that are constantly shaping their channels. The flowing waters will hook you on shooting the rapids! Read more > 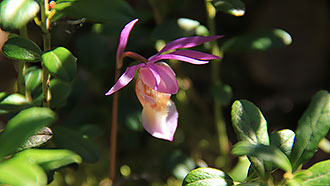 The emblem of Oulanka National Park is the calypso orchid. This delicate flower grows on beds of moss deep in the forest. Its pollination is based on deceiving pollinator insects. Read more > 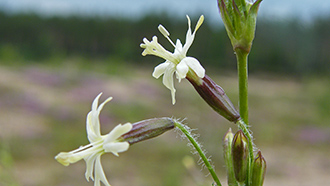 Oulanka has an abundance of organisms! The park is a place where eastern, northern and southern species come together. Read more > 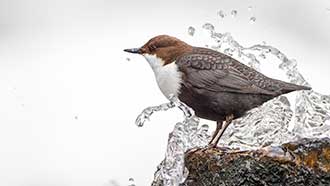 The White-Throat Dipper is also catching up in the waters of winter. The feather suit remains watertight thanks to the secretion of grease at the base of the tail. 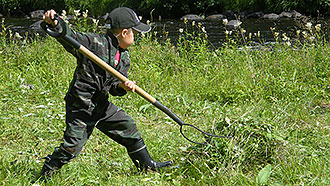 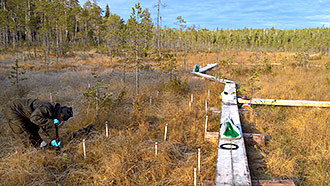 Science and research since 1966

The quality of Oulanka’s waters and air is monitored constantly around the year. A new study is examining how climate change affects animals and plants (oulu.fi). Read more > 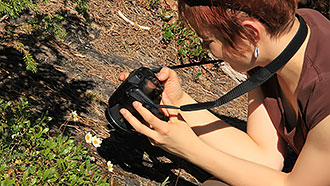 Oulanka is home to an amazing number of endangered species. Movement has been restricted in, for example, the Pieni Karhunkierros Trail (Pdf File, 5.08 Mb, julkaisut.metsa.fi). Read more > 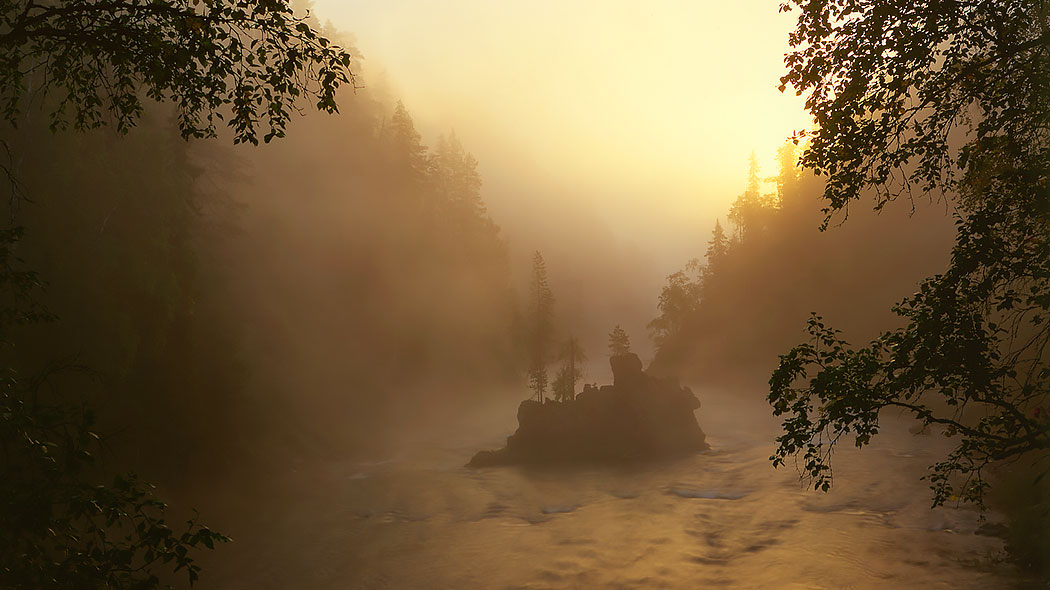 The northern part of the national park is marked by aapa mires and offers a flat but challenging terrain. The area boasts a fascinating scenery of wet mires, lakes and ponds, narrow, curving rivers and patches of low-growing forests. The only distinguishable elevation is the Keroharju ridge which was formed during the ice age. The mire area is home to ancient spruce forests that have never been touched by fire. The pine woods in the valley of the River Oulankajoki, on the other hand, not only display the marks of forest fires, but also the signs of logging that took place over a century ago.
Oulanka is filled with diverse rich fens and hanging bogs as well as lush fern groves by the sides of brooks. Fringed pink (Dianthus superbus) grows with dwarf milkwort (Polygala amarella) under the shade of pines in the dry groves by the river’s ancient shoreline. The admiration of nature’s spectacles is by no means limited to the grandiose sceneries, as there is beauty in the small details as well. The Laurilia sulcata fungus grows on trees that have toppled over brooks, and Seligeria mosses require a mere square centimetre of bare rock to grow on.

The rivers Oulankajoki and Kitkajoki are of completely different types. The brown River Oulankajoki draws its water and bitter humus acids from Salla’s open aapa mires. The River Kitkajoki’s clear water comes from the largest lake basin in the Koillismaa region, Lake Kitkajärvi, which is filled with pure groundwater. Even our forefathers did not see the River Kitkajoki in its largest form – as the glacier receded, the river raged through Juuma’s mires, clearing the area of everything that water could carry. The modern day Kitkajoki is a series of rapids, strong currents and lakes which, after the Myllykoski Rapids, turn into the impressive, kilometre-long Aallokkokoski Rapids that rush through a steep ravine valley. Below Jyrävä, the mightiest waterfall in the Koillismaa region, the river starts to calm down until it joins the more peaceful River Oulankajoki close to the Russian border. 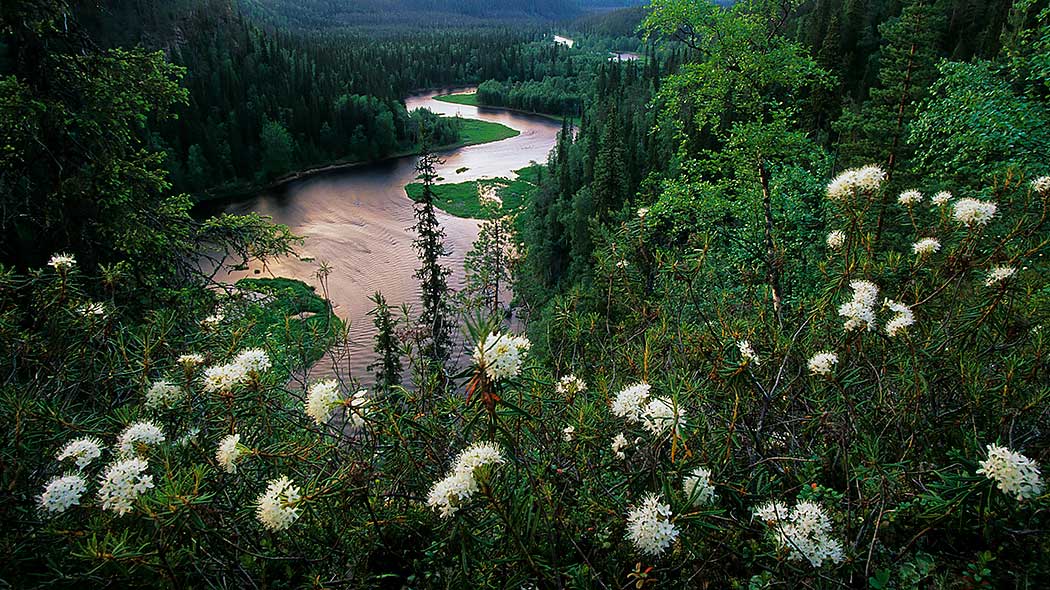 Regardless of its calm nature, even Oulankajoki should not be approached during flood periods. In the spring, ice and snow melt in the northern mires, and in just a few weeks, vast volumes of water flow down to the river valley. The water level rises up to the bridges’ sides, and the meadows become flooded. The flood eats away the river’s sandy banks, tears living trees off their roots and lifts fallen trunks and the Karhunkierros Trail’s bridge structures. Every year the River Oulankajoki carries tonnes and tonnes of sand downstream and across the border – like it has for thousands of years. Ages ago, the ravine valley was filled to the brim with sand, but since the last ice age, the river has lowered the sand level by 30 metres. As a result, the river elegantly meanders through the valley from side to side. Oulanka’s national scenery has been shaped by primeval geological forces and the tireless, yet slow, transformative power of water.

The exceptional richness of Oulanka’s nature has been known since the 19th century. Even the challenging transport connections did not prevent the most famous naturalists of their time from finding their way to Oulanka. They wrote ecstatic descriptions of their pilgrimages to calcareous rocky slopes, rich fens, shady groves and lush brook beds. The number of species in Oulanka has not been established, but nowadays almost 400 protected species are known to live and grow in at least 4,400 habitats in the area.

For many species – especially plants – Oulanka is the only known habitat in Finland. The national park’s special nature is demonstrated by the fact that species not known to science are regularly found in the area. Such species include, for example, lichens Atla oulankaensis and Verrucaria oulankaensis which were met and introduced to science only recently. The diversity of habitats reflects in the abundance of species. 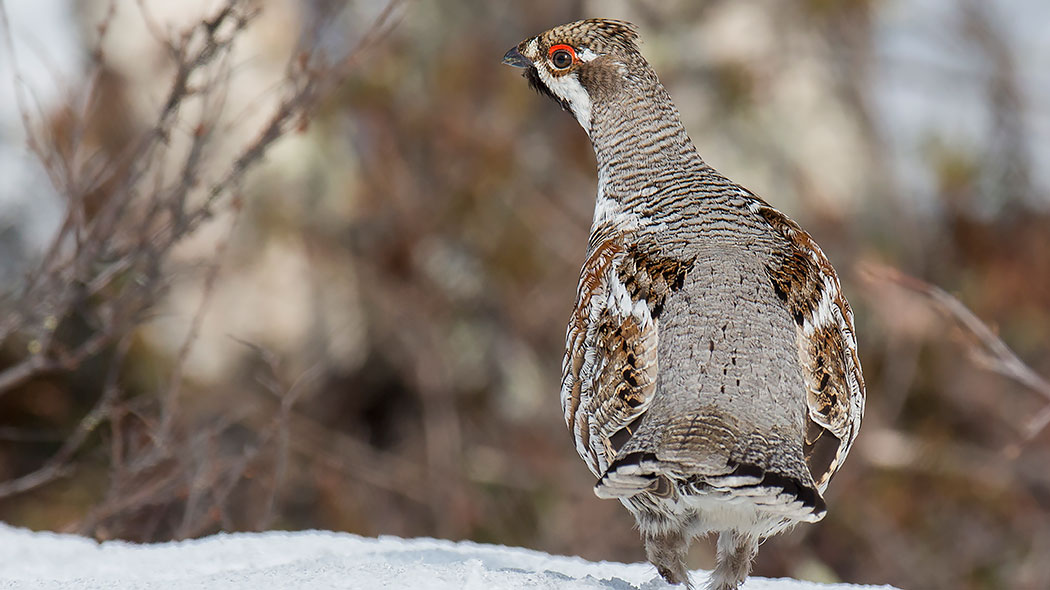 Oulanka’s bedrock consists of various rock types which the geological forces erode in different ways. This has caused the emergence of varying surface forms, such as hills and ravines. The combination of this variance and the area’s climatic conditions have resulted in an exceptionally diverse range of species and nature types. By the River Oulankajoki, hikers have the opportunity to meet species that thrive on the sunny southern hill slopes as well as those that prefer the colder and more shadowy northern slopes far away from their primary habitats.

The Kiutaköngäs, near Oulanka Visitor Centre, has nature trails and is the main habitat of northern spruce forest birds. The Grey Wagtail (Motacilla cinerea), which has nested for several years on the banks of the River Oulankajoki, is a special feature of the area. The White-throated Dipper can also be seen quite often at the river. In late winter visitors can hear the drumming of woodpeckers on Liikasenvaaran tie Road.

The Pieni Karhunkierros Trail in Juuma in the southern part of the park leads through different types of forest. It is, therefore, easy to watch many different bird species on your visit. The best time to visit is the beginning of June, when especially mornings are a sure time to see many species.

The Red-breasted Flycatcher (Ficedula parva) is a annual visitor to the park and can be seen at Savilampi in the northwest of the park.

The calypso orchid lives in old herb-rich forests dominated by spruce. You can also see the species in mixed juniper and pine forests and on the edges of spruce mires if the earth contains enough lime.

Along with the daphne and willows, the calypso orchid is one of the first flowers to bloom in the spring. In the summer after it has bloomed, the plant can be identified by a basal leaf hidden in the moss, the underside of which is violet coloured. The leaf has lengthwise veins and is wrinkled. 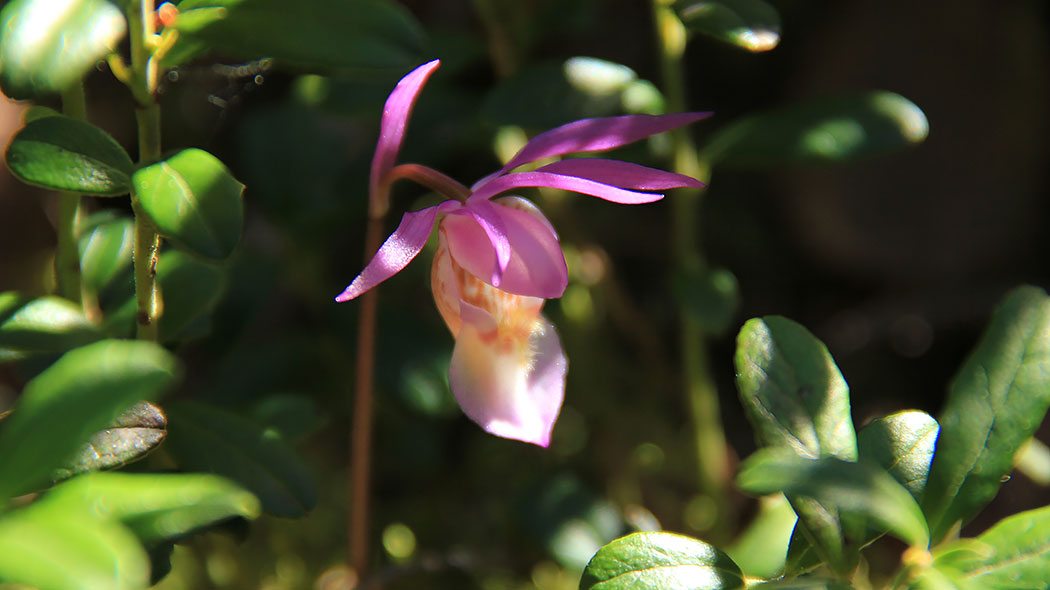 The calypso orchid flower has no nectar, so its pollination is based on deceiving pollinator insects. After a bee has crawled into the flower and discovered that it contains no nutrients, the deception is already – or only – partly successful. The pollen sticks to the insect’s back as it leaves the flower. Now another plant individual has to succeed in deceiving the same insect in order to ensure pollination.

If pollination is successful, an inconspicuous brown pod develops from the flower. The pod scatters seeds the size of pollen particles in the autumn winds. These seeds have to fall in a suitable spot on the ground and then find a partner fungus growing as a mycelium. The plant will live rest of its life in symbiosis with the fungus. Calypso orchid pod production varies each year depending on the weather conditions while it flowers and the number of pollinators.

The calypso orchid grows slowly and it can take years to develop from seed to blooming plant. If the site is favourable, a patch comprising dozens of individual plants can develop in the same place over a period of decades. 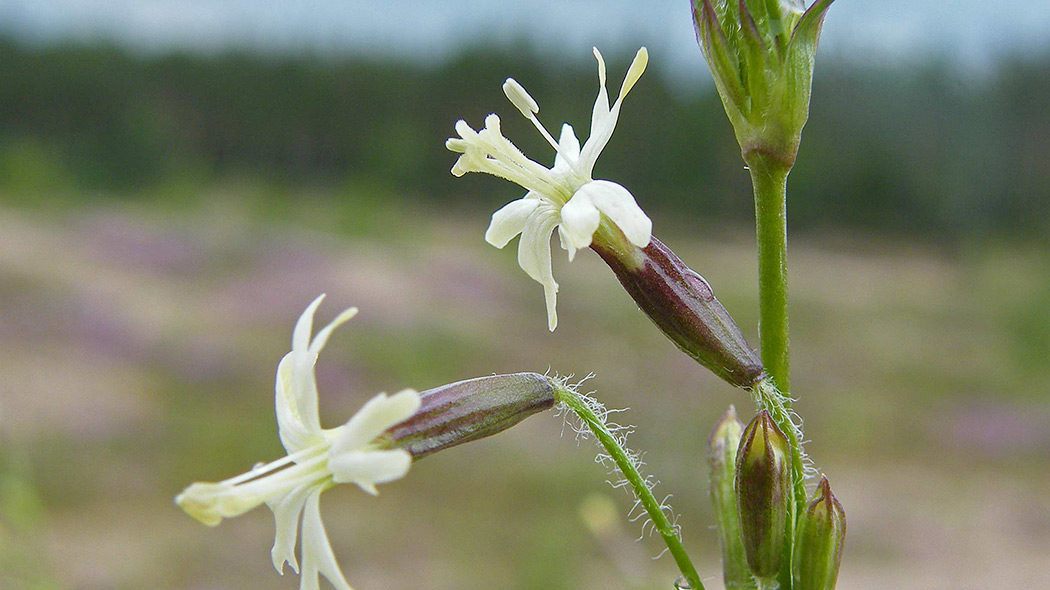 The alluvial meadows by the River Oulankajoki are a heritage left behind by Finnish settlers who arrived in the Kuusamo area in the late 17th century. In the old days, the livestock’s winter forage had to be collected from natural meadows. The alluvial meadows were the most sought-after as the river took care of their fertilisation. Both spring and autumn floods filled the meadows with silt, ensuring that the growth would be strong in the following year. Over a hundred hectares of alluvial meadows were cleared over a few centuries. As the need for forage increased, people started growing hay in the fen meadows as well. The growth was improved by raising water to the fens by damming brooks. The Rytipuro Brook meadow is Finland’s last remaining meadow managed traditionally by damming. The meadows offer a thriving habitat for species that require abundant light and open space, such as small ferns and moonworts (Botrychium spp.). In Oulanka’s alluvial meadows, you can also find local rarities, such as blue-berried honeysuckle (Lonicera caerulea) and blue fleabane’s subspecies Erigeron acris ssp. decoloratus. Traditional cultivation methods were slowly abandoned as agriculture developed. Gradually since the 1950’s, the meadows that were once bursting with the diversity of species started to become forested. Nowadays meadows are one of Finland’s most endangered nature types. 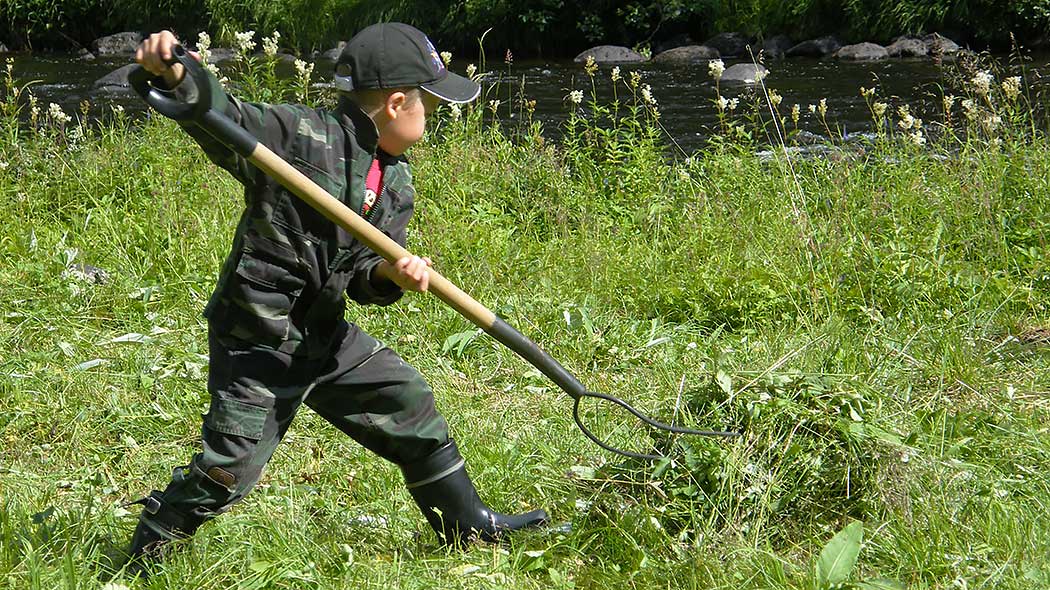 Since the late 1990’s, Oulanka’s meadows have been managed by mowing and clearing. Today, one dammed meadow, a few dry meadows and 29 alluvial meadows are managed by the River Oulankajoki’s 40-kilometre stretch between its crossings with the rivers Savinajoki and Kitkajoki. In the early summer, the alluvial meadows are covered by seas of globe flowers, and visitors can feel the meadows’ historical heritage when admiring the old barns. The meadows’ traditions are upheld in Oulanka’s annual voluntary management events.