The farm is managed by Metsähallitus.

Located at the north end of Koli National Park, the former slash-and-burn farms of Ollila and Turula are well worth visiting in the summer. From the farms' fields, where the landscape is managed by Finnsheep and Finncattle in the summer, there is a wide open view over the surrounding hills.

The Ollila farm is one of the five oldest farms in Koli. It was divided in two in 1937 to create the co-located Ollila and Turula farms. Together they form a valuable traditional landscape.

Management of the Traditional Swidden Landscape

Today, the management of the Ollila and Turula farms focuses on preserving the open landscape created by slash-and-burn agriculture. You can learn more about this technique by taking the Kasken Kierros trail, which runs through the farms. 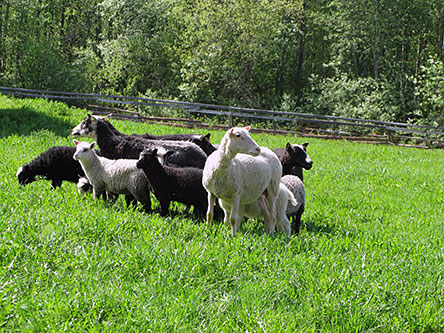 Between 1998 and 2000, the farmyard's traditional landscapes were reconstructed. The grazing lands were cleared semi-open, and the fields, yards and paths were mowed. The old fence building tradition has been revived, and the fields are now fenced in the traditional eastern Finnish roundpole style in addition to the sheep wire fencing. Formerly, the purpose of the fences was to keep the cows grazing in the forests and out of the fields. There is also an old stone fence between the fields of Ollila and Turula.

The Other Half of Ollila became Turula

The Ollila farm was established in the mid-18th century. It was owned by the same family until 1995, when the state bought it and it was included into Koli National Park. The first owner of the farm was Olli Turunen in 1750–91, after whom the farm was presumably named. The main source of livelihood for the early residents was slash-and-burn farming. More modern techniques began at the end of the 19th century, when agriculture and animal husbandry became the most important livelihoods. In the 20th century, the farms had large areas of cultivated fields and meadows, 30 hectares at its height. However, the slash-and-burn tradition was maintained, and the last slash-and-burn fires blazed on the Ollila lands at the beginning of the 20th century, and the areas were used to grow rye and turnip. According to folk memory, the old slash-and-burn areas were covered with alder stands in the 1950s, but today they are covered with forests. In recent decades, slash-and-burn fires have again smouldered in Koli with the aim of preserving the traditional landscape. Some of Ollila's old slash-and-burn areas have also been taken into use.

The Ollila farm was divided between two brothers in the 1930s. The fields and meadows were divided in two, and the main structure at Ollila, built of logs, was also cut in half. The Turula house was constructed from the resulting pieces at a distance of 200 metres from the Ollila main building. Ollila's owner, Erkki Olavi Turunen, was killed in action during the war in 1944. He had willed the Ollila farm to his brother Johannes, who owned the Turula farm. The farms were thus re-united. A new main building was built at Ollila in 1955, and the farmyard received its present appearance. The drying barn and the row of storehouses represent older building stock, dating back to the 19th century.

In the summer, the cows grazed in the forest from where they would come to the yard to be milked. There were seven or eight milking cows and their calves. The cows were milked by hand. When the cows were being milked in the summer, smouldering fires from resinous tree stumps – collected from mires and dried – covered with turf, were kept alight so that the insects would not disturb them. The milk was kept in a well before churning or being taken to the milk lorry.

The Ollila and Turula farmyards are open to visitors year-round free of charge. In addition, the main building of Turula is rented out by the Koli Nature Centre Ukko to schools and associations for various activities, such as camps, in return for voluntary work.

A 1.5-kilometre long marked hiking trail runs from the village of Koli through the Mattila farm to the Ollila and Turula farms. If you are coming by car, drive the Ylä-Kolintie road from the village of Koli for a kilometre and then turn left at the sign to Mattila. Soon after the turn-off, there is a parking area for the Ollila, Mattila and Turula farms, from which it is a 300-metre walk to Ollila. You can walk from Ollila to Turula along the marked trail between the pasture fences. The distance is approximately 200 metres.

The Ollila and Turula farms are located at the north end of Koli National Park along the marked hiking trails. For example, the Kasken Kierros Nature Trail featuring the slash-and-burn landscape runs through the farmyards. The farms are also directly connected to other trails of the park. The Ylä-Kolintie road from the village of Koli passes by the Ollila and Turula farms at a distance of a couple of hundred metres.

There is a campfire site, firewood shed and dry toilet for hikers in the Turula farmyard. The meadow around the campfire site has been designated as a hiker campsite.

There are no accessible services in the area.

This is the webpage www.nationalparks.fi/ollilaandturulafarms