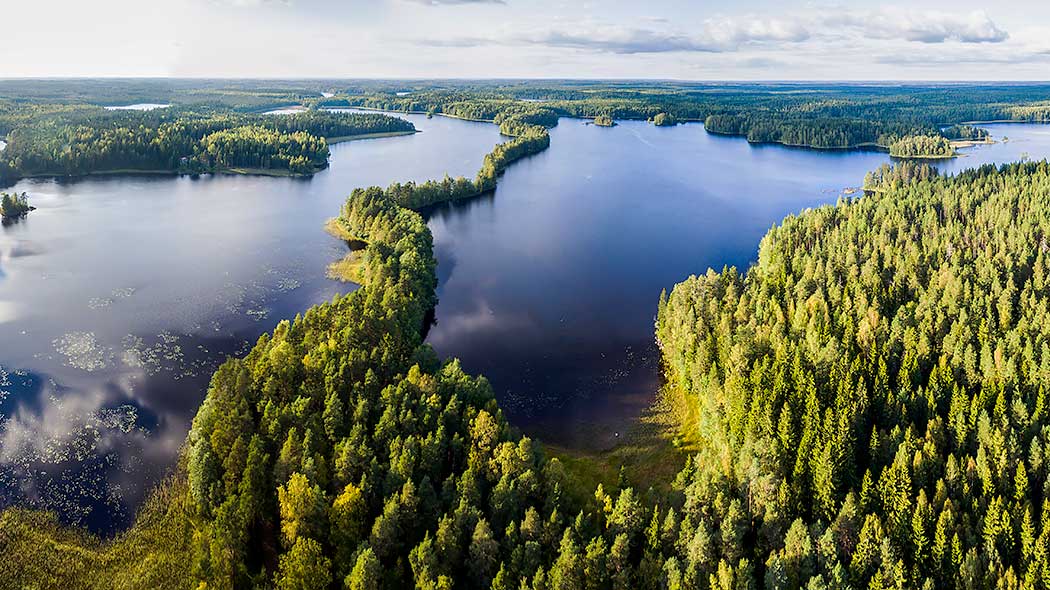 Despite its small size, Liesjärvi National Park is rich in nature. The picturesque Kyynäränharju Ridge traces the line along which of the ice once advanced. 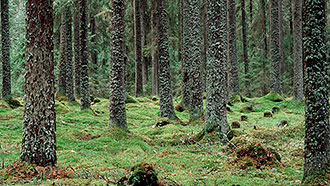 Lay yourself down on a pillow of soft moss or let your gaze rest on a calm lake surface. In Liesjärvi National Park you can enjoy many types of scenery.
Read more > 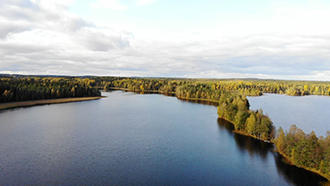 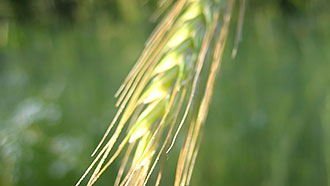 Cornflowers and ears of rye

On Korteniemi Heritage Farm, you can see crops of the times past and beautiful meadow flowers. A cornflower and an ear of rye are also featured in the emblem of National Park.
Read more > 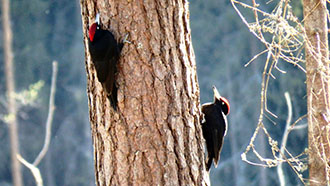 Experience the richness of species! In Liesjärvi you will find many hole-nesting birds and other species of coniferous forests.
Read more > 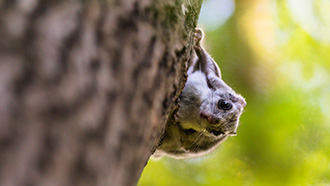 Have you seen a flying squirrel? An observant hiker may spot traces of this dweller of the National Park, even if the animal itself is not often seen.
Read more > 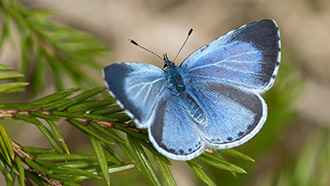 The fascinating world of insects in Liesjärvi

A nature enthusiast will find an abundance of insect life in the farm meadows and woods. The holly blue, a butterfly with the colours of the Finnish flag, is resplendent with its blue and white wings. Read more > 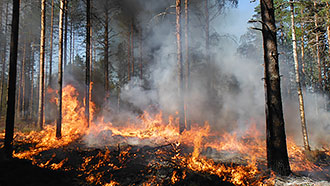 Back to a natural state 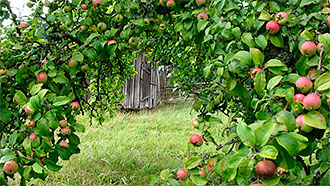 You can take part in environmental management by volunteering to help with harvesting hay or linen.
Read more > 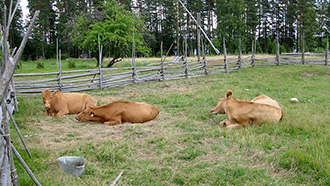 In summer, sheep and cows graze around Korteniemi. These animals are doing an important job managing the landscape.
Read more > 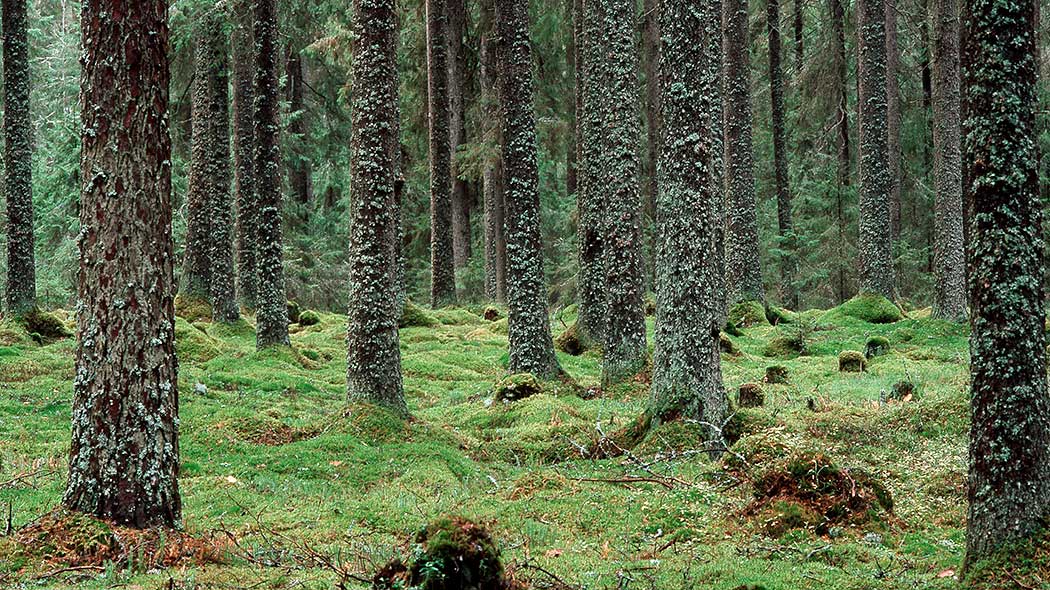 A significant part of the forests in Liesjärvi National Park are more than a century old. Ahonnokka and Isosaari, the most pristine old-growth forests in the area, have been protected since the 1920s. There also are plenty of young and middle-aged forests, as a large part of this area was used for commercial forestry before the National Park was established.

The dominating forest type, which covers almost one half of wooded areas, is fresh spruce forest favoured by the blueberry and the lingonberry. The National Park also contains mires, eskers, shores and beautiful lakes with nearly 50 kilometres of shoreline. In 2005, the park’s surface area was almost doubled as mire reserves and old-growth forests were attached to it. 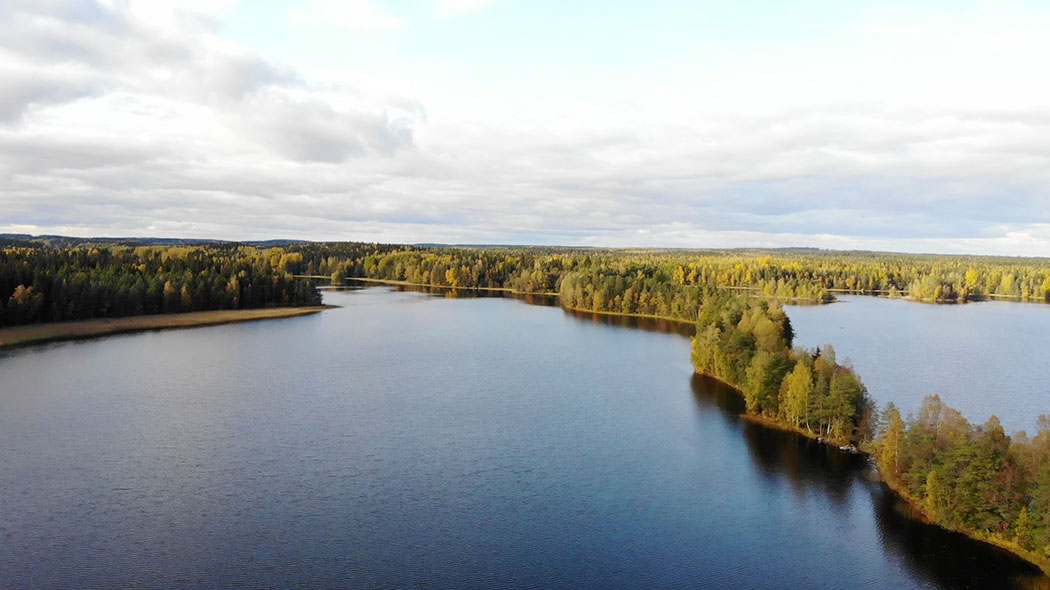 The park’s best-known natural attraction is the low Kyynäränharju esker with its sandy shores. This slender isthmus approximately one kilometre in length separates Lakes Kyynäräjärvi and Liesjärvi. The two lakes are only connected by a narrow channel which hikers can cross along a bridge. The maze-like lake landscape and pristine shores are some of the most important protected values of the national park. The eskers were crafted in late Ice Age as the ice masses were melting.

Cornflowers and Ears of rye 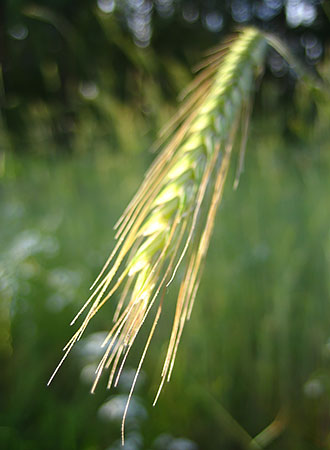 The emblem of Liesjärvi National Park shows an ear of rye (Secale cereale) and a cornflower (Centaurea cyanus). The ear of rye symbolises farming that started with the slash-and-burn culture of olden times. The cornflower, on the other hand, is a beautiful weed often associated with rye as it benefits from traditional harvesting techniques. On Korteniemi Heritage Farm you can find these and other species of the meadows, including the maiden pink (Dianthus deltoides).

Are you a friend of plants? Around Korteniemi Farm, you can also find the moonwort (Botrychium lunaria), the mountain everlasting (Antennaria dioica), the common stork's-bill (Erodium cicutarium) and the bladder campion (Silene vulgaris). Also look out for the flax (Linum usitatissimum) with its delicate blue flowers of an enchanting beauty. 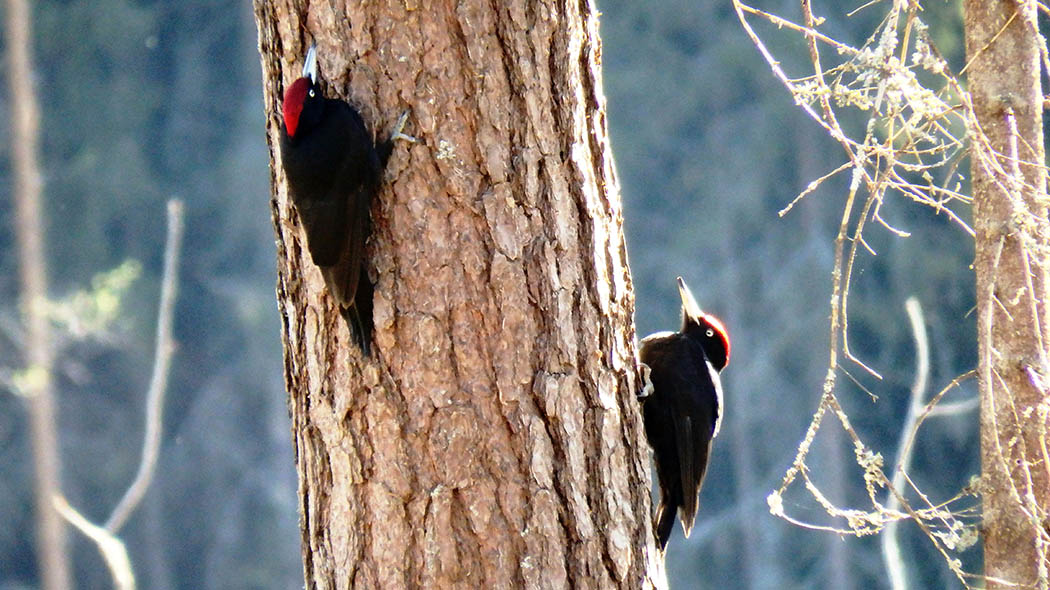 The forests of Liesjärvi are full of life. The birds are typical species of coniferous forests. Thanks to the abundance of old and decaying trees, there are many hole-nesting birds. The old-growth forests and shoreline trees are favoured by such species as woodpeckers. In addition to the Black Woodpecker (Dryocopus martius) and the Great Spotted Woodpecker (Dendrocopos major), these forests are home to the Three-toed Woodpecker (Picoides tridactylus), the Grey-headed Woodpecker (Picus canus) and the Lesser Spotted Woodpecker (Dendrocopos minor). As many as six species of hawks nest in the area. Those visiting the park at the right time may hear the boo-boo-boo of the Tengmalm's Owl (Aegolius funereus) and the hooting of the Eurasian Eagle Owl (Bubo bubo). Swallows (Hirundo rustica) dart across the skies above Korteniemi Heritage Farm, and the call of the Black-throated Diver (Gavia arctica) can be heard from the lake. 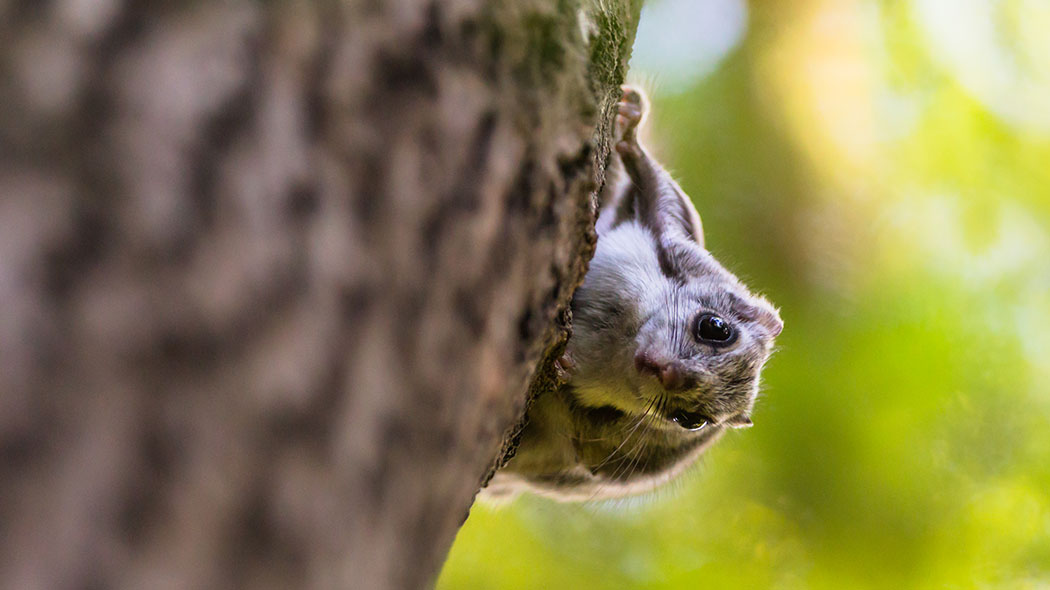 With a bit of luck, you might spot a flying squirrel, a shy creature of old-growth forests. The large shoreline aspens with holes in their boles offer flying squirrels ideal nesting places. While this nocturnal creature is rarely seen, it leaves traces of its occupation: yellow droppings at the foot of the aspen it nests in and toothmarks in aspen leaves. 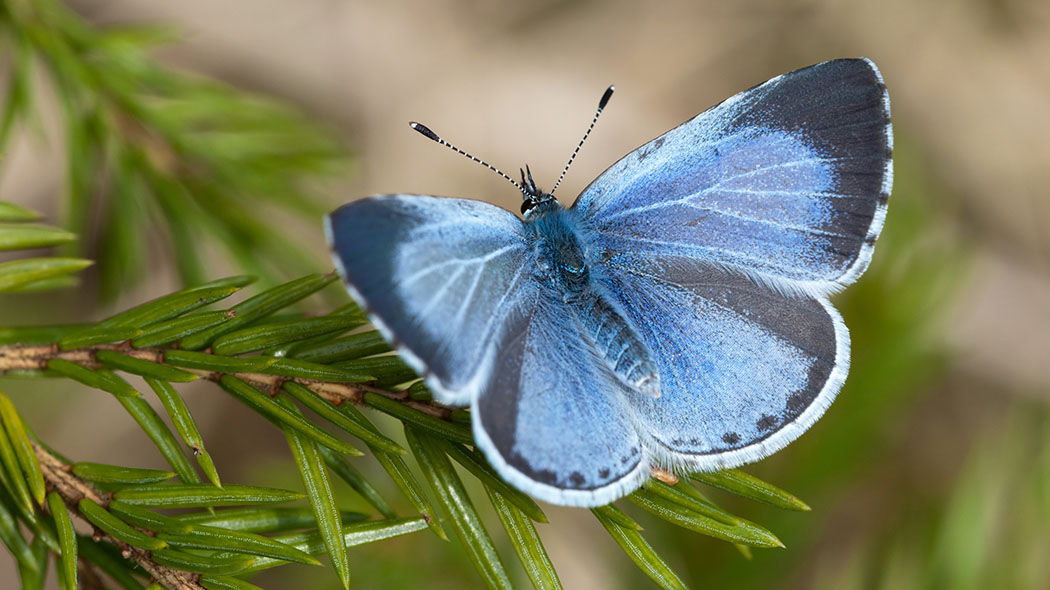 The holly blue (Celastrina argiolus) is a small blue springtime butterfly. It is practically the only blue-winged butterfly out and about at that time of the year, which makes this species rather easy to identify. The holly blue was voted the national butterfly of Finland in 2017. While it is found across the country, it is particularly common in Southern and Central Finland. The male has wings with uniform blue top surfaces, whereas the female’s wing tips are a darker colour. The almost perfect white and blue colour scheme of this butterfly is made complete by the lower surfaces of the wings, which are pale grey in both sexes. The species feels at home in many types of environments, and holly blues are often seen fluttering high up in the air. The holly blue caterpillar lives on buckthorn and alder buckthorn.

The violet oil beetle (Meloe violaceus) is shiny blue in colour and appears to be bumbling along. Unlike many other beetles, the adult of the species cannot fly. Its minute caterpillars climb onto flowers and hitch a ride with solitary bees, in whose nests they live as parasites. After mating, the female can complete a lengthy egg-laying migration along the ground. Adult violet oil beetles can be found in the meadows surrounding Korteniemi Farm and in light-filled esker forests.

The black fire beetle (Melanophila acuminata) and Aradus crenaticollis are insects with a modest appearance. The former is a beetle with a blackish colour, while the latter is a cimex. The black fire beetle senses a forest fire from far away and is the first one to arrive once the fire has burnt itself out. In addition, several other endangered insect species live on burnt wood or the fungi growing on it.

Back to a Natural State

The mark of human activity is still visible in the landscape of Liesjärvi National Park. Signs of the many years of forestry and traditional agriculture can be seen in the area. The Korteniemi forest ranger estate is managed as a heritage farm, and it continues to nurture the 1910s lifestyle. The small, scattered fields and meadows of Korteniemi provide an interesting addition to the national park landscape. 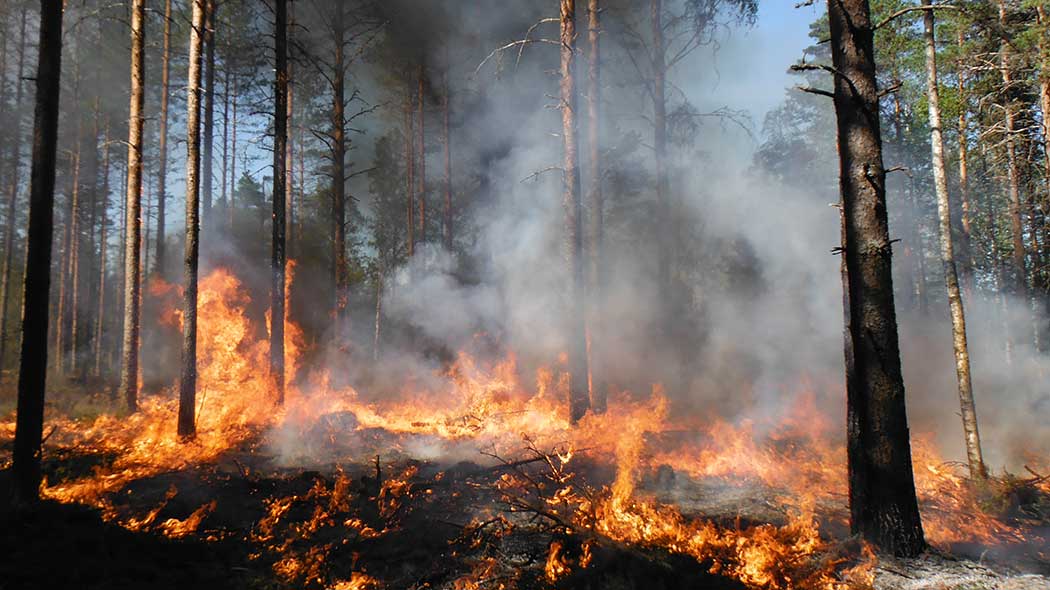 Areas used for commercial forestry in earlier decades are also being restored. Restoration refers to actions aiming to speed up development towards conditions resembling a natural state on the site. One method of restoration is controlled burning, which imitates a natural forest fire. You can observe the natural development of a forest after a fire on the hiking trail from Korteniemi to Kopinlahti as well as in the northern part of the park on Ilvesreitti trail.

In Liesjärvi, old forest drains have also been blocked and filled in to allow the mire to revert ecologically to the levels it was before drainage. Live trees were also girdled and felled to produce more decaying wood. Forest restoration benefits many insects and fungi that depend on decaying wood. Spruce mires are also important for biodiversity. Soukonkorpi is an example of a restored spruce mire that has been the subject of a lot of research. 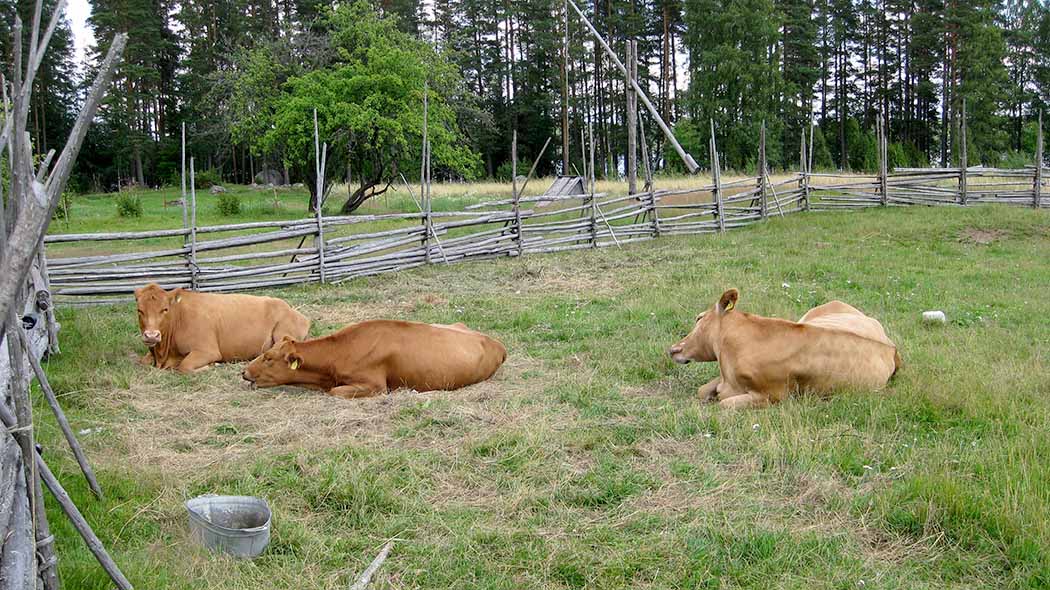 Many species in a heritage environment benefit from mowing and grazing. On Korteniemi Heritage Farm and on the roads leading to it, you may encounter landscape managers at work. Indigenous sheep and a few cows graze the pastures when permitted by the summer’s weather conditions and the length of the growing season.