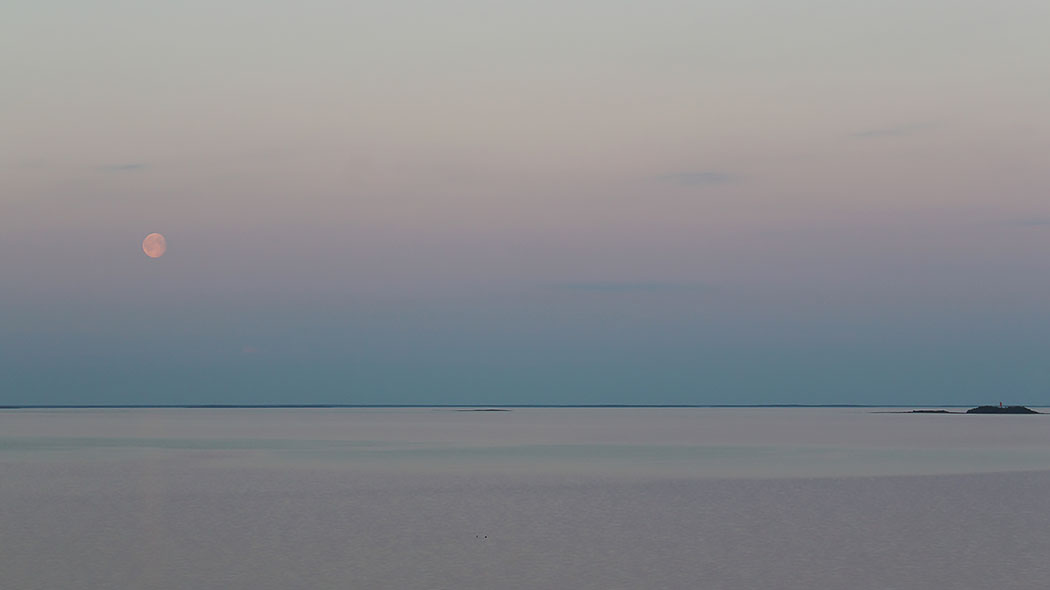 In the Bothnian Bay National Park, rocky islets, flowering beach meadows and juniper groves offer good nesting places for many birds. The earth’s uplift shapes the landscape one millimetre at a time. 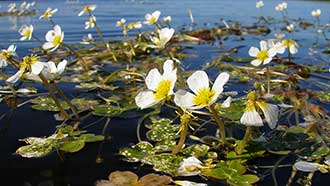 Wide open seas spread around you. The sunset paints the skyline. In the Bothnian Bay you can even get around by canoe!
Read more > 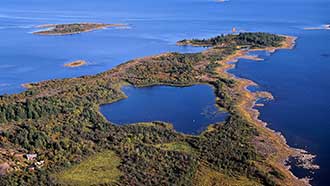 Due to the way the ground has been shaped, the landscape on the paths changes every 10 meters!
Read more > 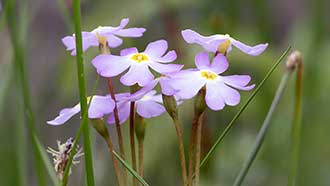 The two regional emblem species are characteristic of the area: the Arctic tern (Sterna paradisaea) and the Siberian primrose (Primula nutans).
Read more > 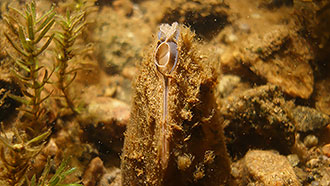 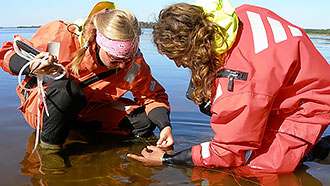 Life of a Marine Biologist

The underwater nature of the Bothnian Bay has been studied and mapped for over 10 years. Purpose of the Inventory Programme is to find out what's underneath the surface! Read more > 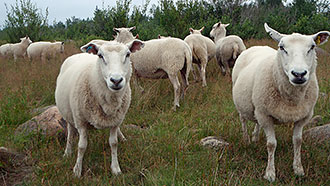 Summer workers at the Metsähallitus since 1996

The beautiful shore meadows of the Bothnian Bay are maintained regularly. On the island of Selkä-Sarve, fluffy sheep take care of the grazing. Read more > 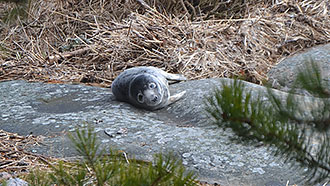 Protecting the seals at Möyly 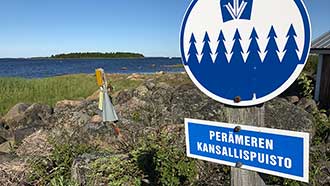 The park is in the northern-most corner of the Bothnian Bay in the Kemi and Tornio outer archipelago. The view is that of vast open sea. The shores are very rocky and the waters in the area are shallow, for the most part under 10 metres deep. 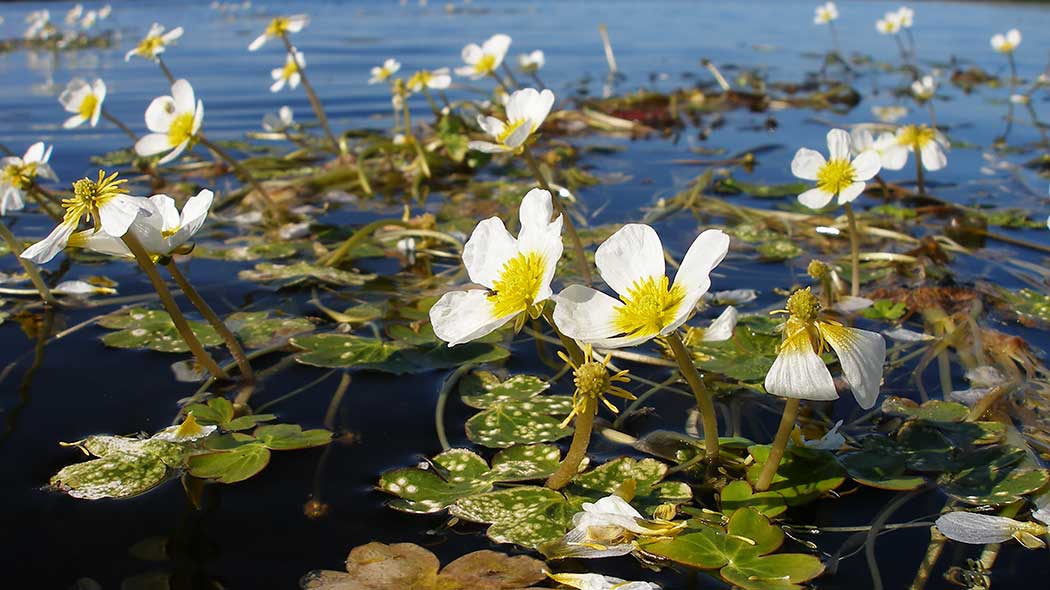 The National Park is made up of around 30 moraine islands and reefs, which have all been moulded by waves, packed ice and land uplifts. The youngest of these islands are virtually plant-less reefs and the oldest have a thin covering of forest. During the middle of summer, vast meadows blossom on the shores of many islands.

Bothnian Bay National Park is situated on a land uplift coast. During the last Ice Age continental glaciers pressed a depression into the Earth's crust, which was hundreds of metres deep. To this day the bottom of this depression is slowly rising to reach its original level. For this reason the Earth's crust lifts an annual 9 mm in the Bothnian Bay. The National Park's oldest island rose from the sea 1000 years ago. 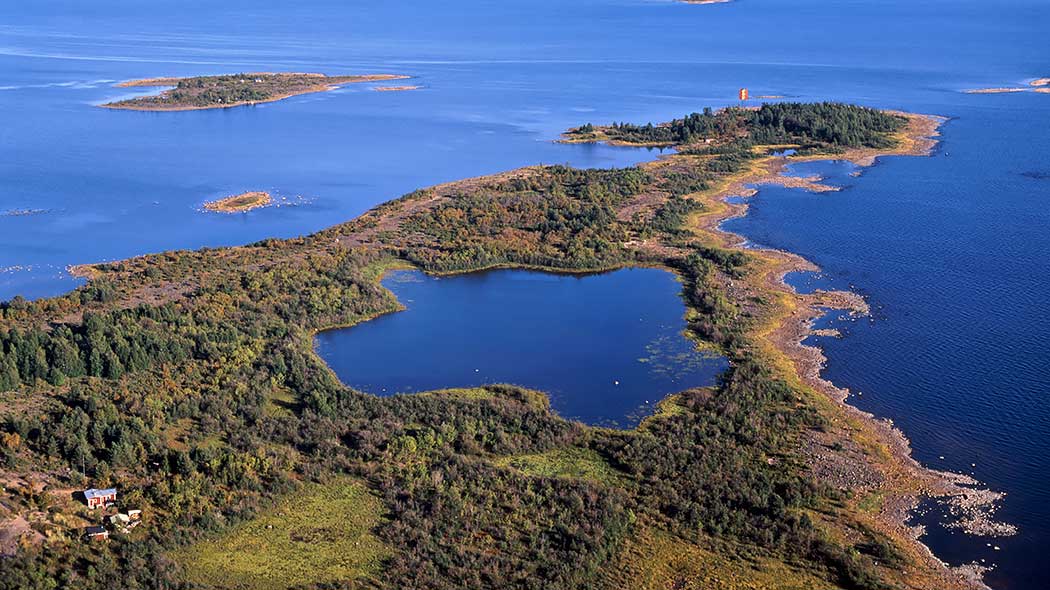 Land uplift causes new reefs and shoals to rise into view constantly. Plants slowly spread over these. Because these islands rise from the sea little by little the plant life on them grows in zones. The shores are covered by meadows. Farther-up inland there are stands of willows and in the centre of these islands grow lush deciduous forests. The peaks of the area's oldest islands, like Selkä-Sarvi and Vähä-Huituri, are covered by juniper growing heaths or stunted coniferous forest.

The shores of islands are in general rocky. There are natural sandy beaches on the north shore of Vähä-Huituri Island. On the island of Pensaskari there is a small lake which has been cut off from the sea. These are typical in uplift regions.

The islands are a refuge for threatened sea-birds. There are around 60 species nesting in the National Park. The archipelago is home to the emblem bird of the National Park, the Arctic Tern (Sterna paradisaea), as well as, the Velvet Scoter (Melanitta fusca), the Black Guillemot (Cepphus grylle), the Ruddy Turnstone (Arenaria interpres), the Temminck's Stint (Calidris temminckii), the Little Tern (Sterna albifrons) and the Greater Scaup (Aythya marila).

This area has several rare plants, which are only found in coastal uplift regions in Finland. The emblem plant of the National Park is the threatened Primula nutans var. jokelae survives only in places where uplifts cause new land to constantly rise from the sea. There are also some interesting plants indigenous to Finland, such as Artemisia campestris ssp. bottnica and a hair grass Deschampsia bottnica.

Arctic terns (Sterna paradisaea) that skilfully race and chase each other are a familiar sight in the Bothnian Bay National Park. The species is commonly found in small communities or as single pairs on treeless islets and on the open shores of bigger islands. Many have got to know the species a little too well. When defending their nests, the screeching terns make wild, darting swoops to deter the troublemaker, whether it was a mink or a man. The most irritable individuals are not satisfied with just a brush but end their dive by nicking a hole in the scalp. Despite their touchy nature, the terns still aren’t able to repel all egg thieves that approach their nests. The Arctic tern used to be the archipelago’s most abundant bird species, but its numbers have declined in the Bothnian Bay over the past few decades, partly because of the population growth of the European herring gull (Larus argentatus).

The Arctic tern’s good flying skills are also required for its long migratory journeys.  Of the Finnish species, the Arctic tern flies furthest for the winter, all the way to Antarctica.  For most of the year, the species is migrating either to the south or to the north. According to studies, a round trip can accumulate more than 70,000 kilometres annually. The terns will only arrive at their nesting islets in May / June. By mid-summer at the latest, one or two eggs are laid in a modest nesting hole in the shingles or on the rocks. Chick are reared with fish and insects that make them strong enough to fly. A couple of months later, in August, it’s time to move again. 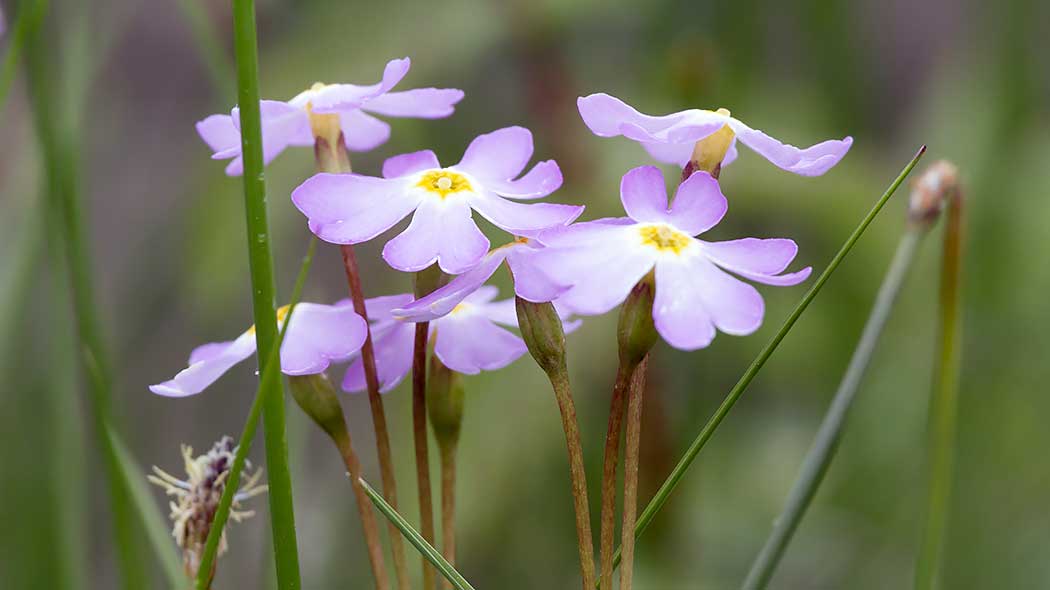 The Siberian primrose might be familiar to those who have visited the Arctic Ocean, as it grows on the banks of Ruija in Norwegian Lapland. It is not found in the southernmost part of Norway's coast, nor in Southern Sweden. Somehow however the species has ended up at the Bothnian Bay region, but how? Could it have been a seed that travelled with migratory birds? The current understanding is that, after the ice age, the Siberian primrose spread from the east to the White Sea, from where it spread through the narrow straits both to the Bothnian Bay and the Arctic Ocean.

The underwater nature of the Bothnian Bay is a unique combination of marine and freshwater species. The Baltic Sea relict crustacean Saduria entomon lives side by side with the freshwater duck mussel as does the Baltic water-plantain, endemic to the Baltic Sea, with the non-native species Canadian waterweed. The water is brown with a high humus concentration, and the effects of the Torniojoki and Kemijoki rivers reach far into the southern border of the Bothnian Bay National Park. 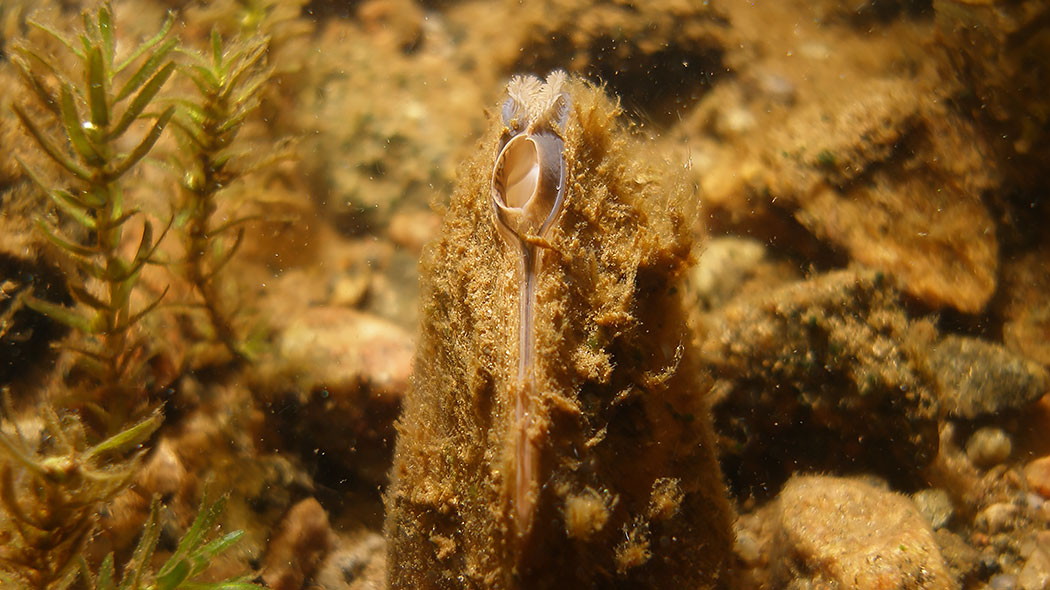 Day in the life of a Marine Biologist

The underwater nature of the Bothnian Bay has been studied and mapped for over 10 years. Metsähallitus’ marine biologists dive, wade and record on video underwater natural habitats and species. The mapping is part of a national inventory programme the purpose of which is to find out what is underneath the surface in various places in Finland. The data also allows the planning of sustainable care and use of the protected areas. The field season lasts from the beginning of June to the end of September. 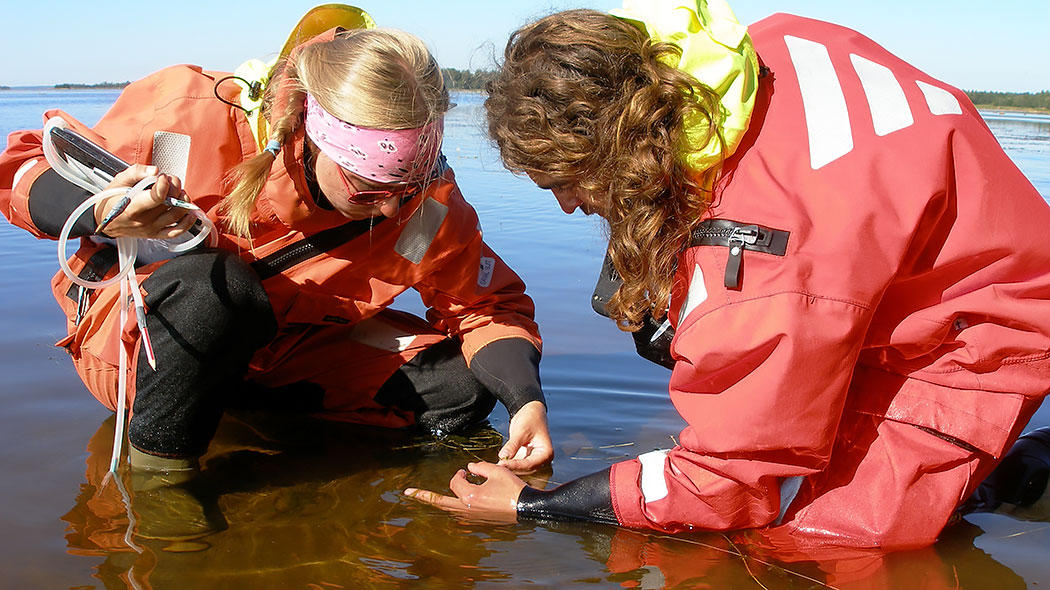 Summer work at the Metsähallitus since 1996

The tradition of having livestock graze on these islands has created traditional landscapes. Grazing and the area's land uplift have together created the National Park's characteristic vast coastal meadows. There are also old fishing bases on many of the islands, with dry meadows on their grounds. After grazing culture ended in the area pasture meadows were becoming overgrown quickly. Starting in the mid-1990s they have been managed and preserved. Traditional landscapes, which have best survived in the park are on the island of Selkä-Sarvi, where sheep have been grazing yet again since 1996. 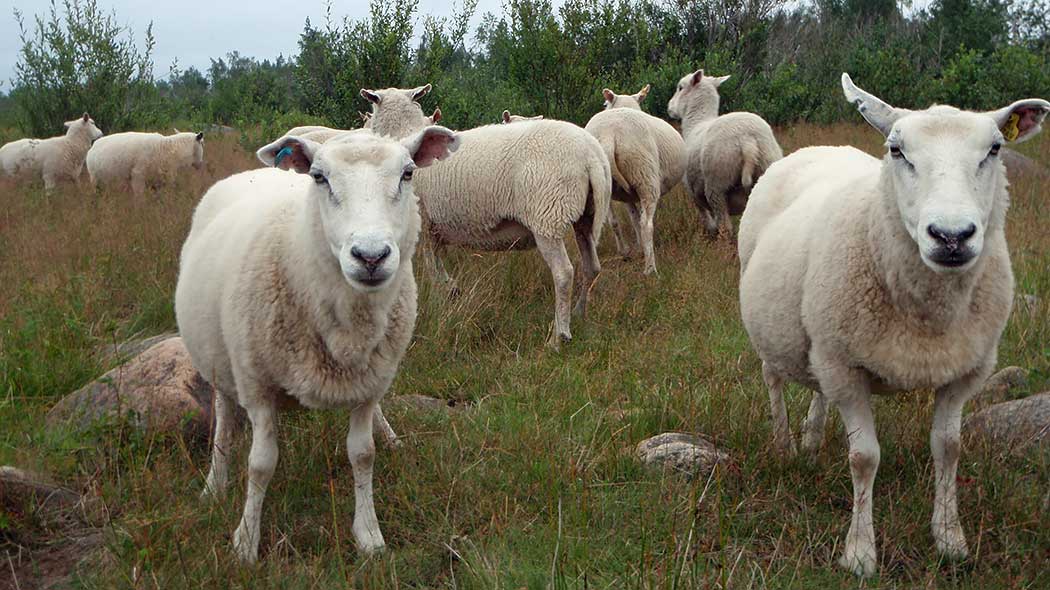