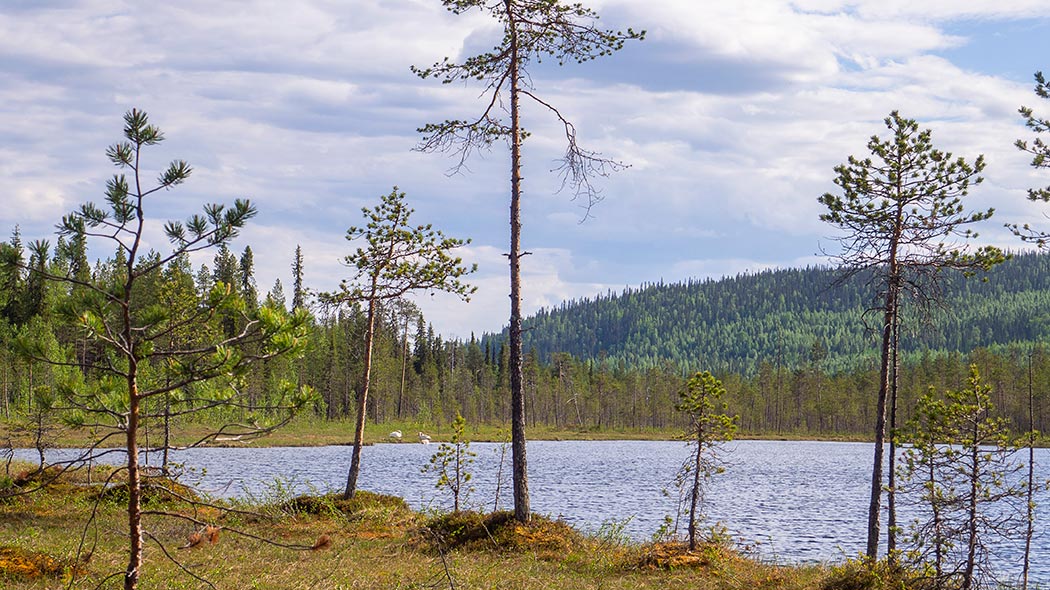 Salla National Park and its neighbouring areas are part of Kuusamo highlands, often known as Koillismaa. It is characterised by hill formations and mire areas found between them. The landscape is dominated by Iso Pyhätunturi (477 m above sea level) located in the National Park as well as Ruuhitunturi (472 m), Palotunturi (467 m) and Vilmatunturi (432 m) outside its borders. 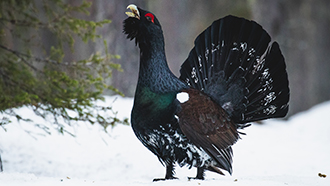 Home of the capercaillie

The capercaillie (Tetrao urogallus) is the emblem species of Salla National Park and a permanent resident here, as the old-growth forests provide ideal conditions for this large bird.
Read More > 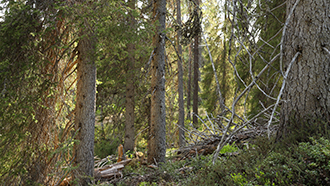 Rare species of the old-growth forests

The general appearance of the heath forests in Salla is characterised by sparse vegetation and few species.
Read More > 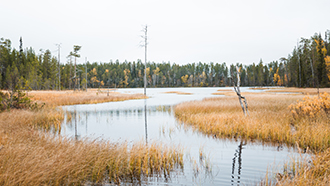 Numerous mires and streams and many types of wetlands can be found in the National Park and its vicinity.
Read More > 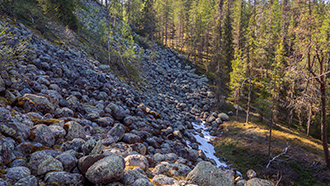 Hills and ravines shaped by the Ice Age 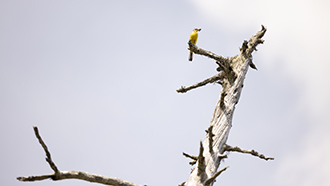 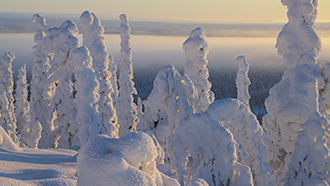 Koillismaa has some of the heaviest snow falls in Finland, and extremely cold temperatures are common.
Read More > 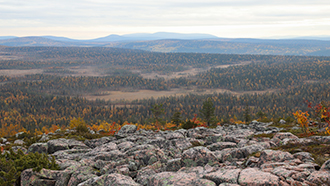 Large protected areas on two sides of the border

Salla National Park and its neighbouring areas form a cohesive zone of protected areas and other special sites of ecological value approx. 130 km in length on both sides of the border.
Read More > 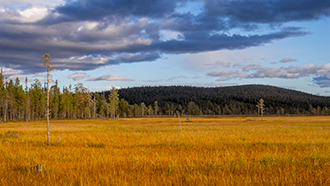 Other protected areas in the vicinity

The municipality of Salla is like Lapland in miniature.
Read More >

Salla National Park is located in an ecotone area. Its ecological features include the forested hills typical of Kainuu with spruce forests tested by crown snow loads and the flark-surfaced aapa mires of northern Ostrobothnia. Salla National Park also contains rich fens and habitats for demanding calciphilous species. The area is home to a wide range of animal species.

In the southern part of Salla, a number of other protected areas are found in addition to the National Park. The hiking trails give visitors a taste of three of these nature reserves.

Home of the capercaillie

The capercaillie (Tetrao urogallus) is the emblem species of Salla National Park and a permanent resident here, as the old-growth forests provide ideal conditions for this large bird. Stream banks, wetlands and marshy low-lying areas are important for the capercailli. The capercaillie is at home in mixed forests which provide diverse food sources in sufficient quantities. The males like to spend the winter in pine mires, whereas the females overwinter among younger pine trees of a more uniform quality. Blueberries are an important food source for capercaillie chicks.

You may come across a capercaillie when walking in the National Park. In winter, you can often see pine needles and droppings in the snow at the foot of pine trees. In particular, the capercaillie favours the pine mires in the eastern parts of the National Park in winter. In some winters, you can even meet small flocks of capercaillie males feeding on stunted pine trees in the mires. The stunted mire pines are the preferred food source of the capercaillie; researchers have found that they contain more raw protein and energy than normal trees. On extremely cold days, both the capercaillie and other forest fowls hide under the snow to digest their food and shelter for the night. 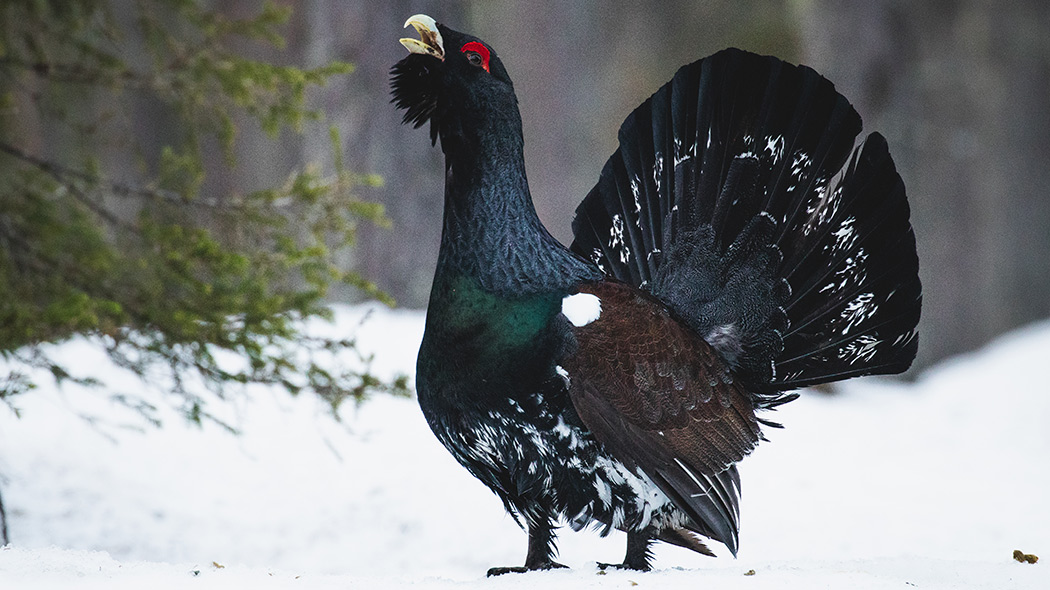 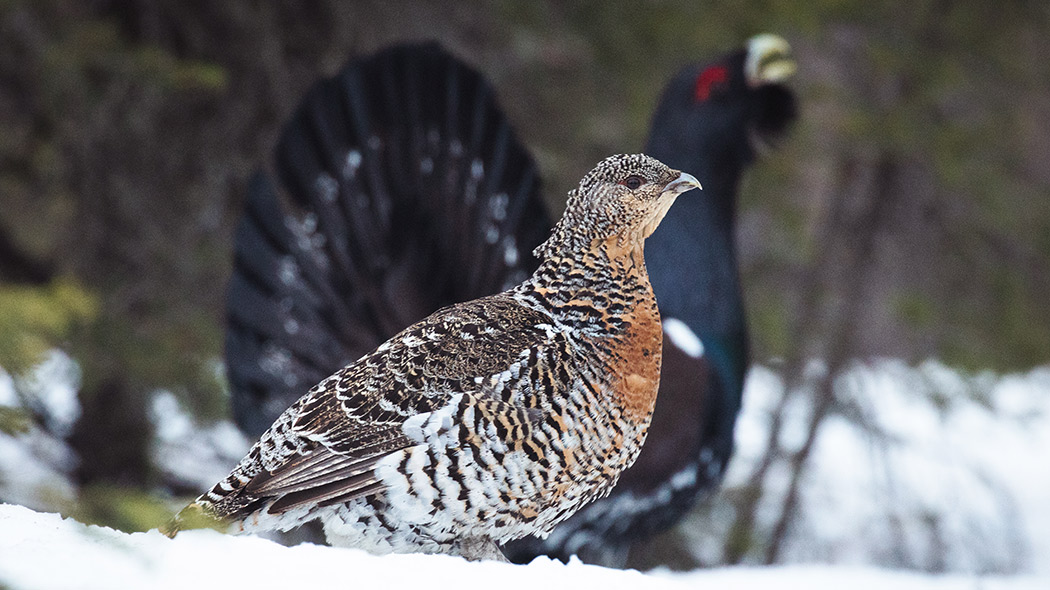 Rare species of the old-growth forests

The general appearance of the heath forests in Salla is characterised by sparse vegetation and few species. The shrubs of the heath forest include the familiar blueberry (Vaccinium myrtillus) and the crowberry (Empetrum nigrum), whereas the bog bilberry (Vaccinium uliginosum) and March Labrador tea (Rhododendron tomentosum) are the most common shrubs in the mires. Ancient spruce forests and old thick-barked pines are typical of the landscapes in Salla National Park. The old-growth forests provide habitat for many rare species dependent on decaying wood. For example, an extremely rare polypore species (Antrodia crassa) can be found in the National Park, and with a bit of luck, you may spot a threatened Xestia sincera moth flitting around in a spruce stand carpeted with a thick layer of moss on a bright summer night. The grey-headed chickadee (Parus cinctus), Siberian jay (Perisoreus infaustus) and three-toed woodpecker (Picoides tridactylus) also live in old mixed forests, even if these species, too, have declined as old-growth forests shrink. 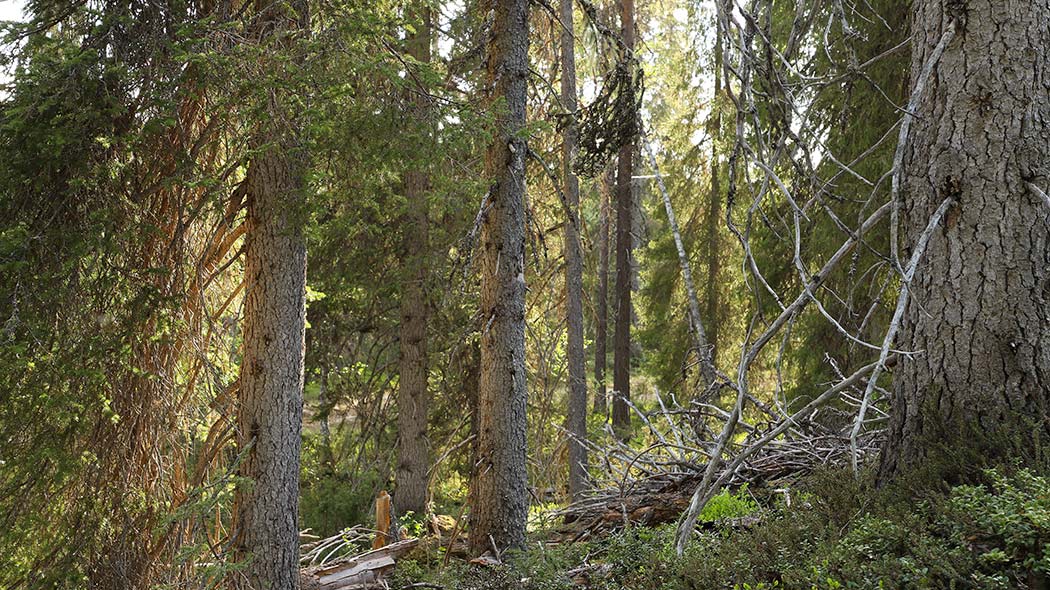 Numerous mires and streams and many types of wetlands can be found in the National Park and its vicinity. On the slopes of the fells, you may find lush water courses with ferns (Pteridophytina) and globeflowers (Trollius europaeus) growing on their banks. Beside a stream, you may spot an alpine sow thistle (Lactuca alpina) with its delicate purple flowers. Koillismaa is one of the key areas for the alpine sow thistle in Finland. In pine mires on the edges of marshes, you may see a little bunting (Schoeniclus pusillus). Salla has one of the largest populations of this bird species in Finland. You might also spot the increasingly rare Lapland ringlet (Erebia embla) among the butterflies fluttering above wooded mires, but happening upon the iris rover moth (Hillia iris) in a stream bank shrubbery at night would take good luck. 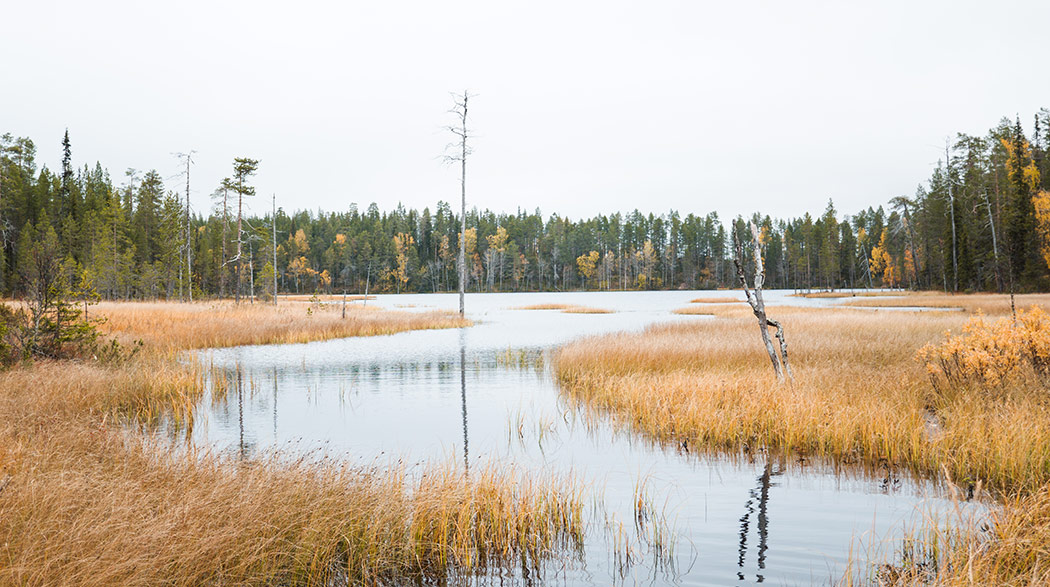 There is a number of small marshes and sloping fens on the fells and hills in the National Park and its vicinity. Most marshes in Salla are mesotrophic flark-surfaced aapa mires. Narrow strips of herb-rich forest on stream banks and valuable rich fens can also be found in this area. Common species of rich fens include the broad-leaved cotton grass (Eriophorum latifolium) with its tufts swaying on a long stalk, the beautiful heath spotted-orchid (Dactylorhiza maculata), and the common butterwort (Pinquicula vulgaris), which traps insects. A high number of threatened and demanding species are found in the fens, including the marsh saxifrage (Saxifraga hirculus), endangered meesia moss (Meesia longiseta) and protected slender green feather moss (Hamatocaulis vernicosus). Petrifying springs with rare moss species can be found in Aatsinginhauta valley in the National Park.

Outside the National Park in the south, extensive fens and aapa mires open out, for example in Löytöjänkä-Suksenpaistama-aava Mire Reserve.

Hills and ravines shaped by the Ice Age

Several chains of eskers stretching from northwest to southeast traverse Salla. Kaunisharju with its old pine trees in the southern part of the National Park consists of two consecutive eskers, Hanhiharju and Kauniinhaudanharju. It was formed on the edge of a glacier that melted around 10,000 years ago as meltwaters deposited sand and gravel in its crevices and tunnels. Plant species that feel at home on sunlit, dry and open sites grow in the esker area, including the spring sedge (Carex ericetorum) and creeping thyme (Thymus serpyllum). There are numerous depressions in Kaunisharju, some of which shelter rare heath plants. The eskers are surrounded by mires and small water bodies, and these low-lying areas under the eskers fill up with scenic mists in autumn mornings.

Many ravine formations are found in the northern parts of the National Park and in its immediate vicinity. Pahaojankuru ravine has steep and rocky slopes and a small stream trickling along its bottom. Located outside the National Park, Kolsanharju is one of the most valuable eskers in Salla. This esker follows the Tenniöjoki River, extending to Savukoski in the northwest and far beyond the eastern border in the southeast.

The 20-kilometre long Aatsinginhauta valley to the east of Sallatunturi fell is a good example of the different wear resistance of rocks. The valley was created over millennia as erosion and Ice Ages wore away the rock and carved out the current rocky ravine. The rock types sedimented in today's valley were less resistant to erosion than the vulcanites (rocks created by volcanic activity) around them. The height difference between the surface of Lake Sotkajärvi at the bottom of Aatsinginhauta and Petservaara, the highest hill flanking the valley, is over 250 metres. Along the slopes of hills in Salla at a height of approximately 230 to 240 metres, you can see boulder fields marking the ancient shoreline that were formed during the period of Salla ice lake. 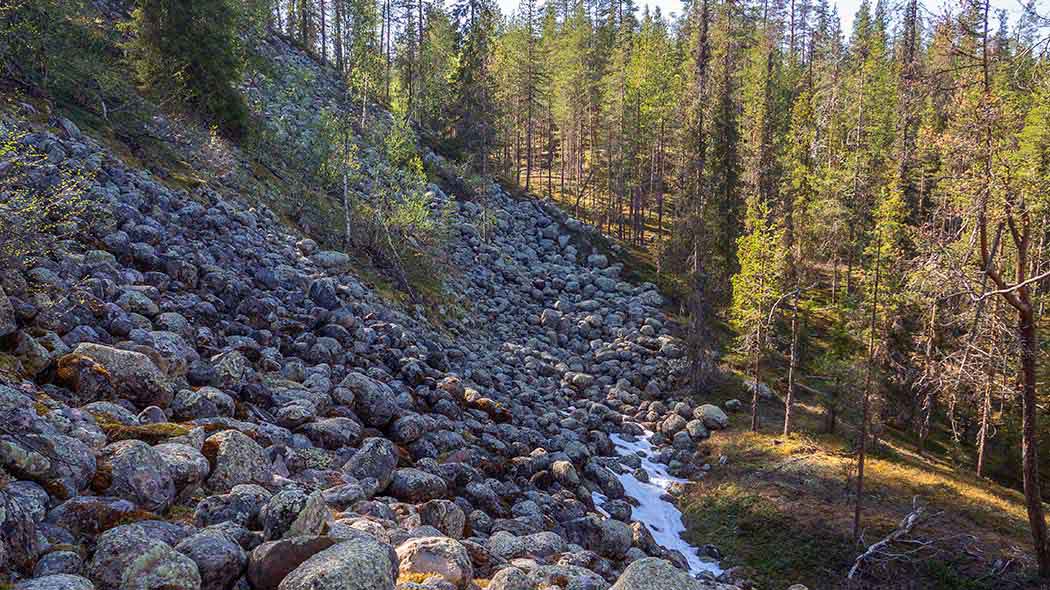 Woodpeckers (Picidea) and tits (Paridae) feel at home in old-growth forests where decaying trees provide suitable food and holes for nests. In years of plentiful vole populations, several owl and hawk species live in old-growth forests, including the Tengmalm's owl (Aegolius funereus), pygmy owl (Glaucidium passerinum) and great grey owl (Strix nebulosa). Assisted by their sharp hearing, they can even snatch voles hiding under the snow. The eagle-owl (Bubo bubo) also once nested here. Of diurnal birds of prey, the rough-legged buzzard (Buteo lagopus), northern goshawk (Accipiter gentilis), merlin (Falco columbarius) and common kestrel (Falco tinnunculus) can be seen in Salla. If you are lucky, you may also spot the golden eagle (Aquila chrysaetos), which has a strong population in Salla. 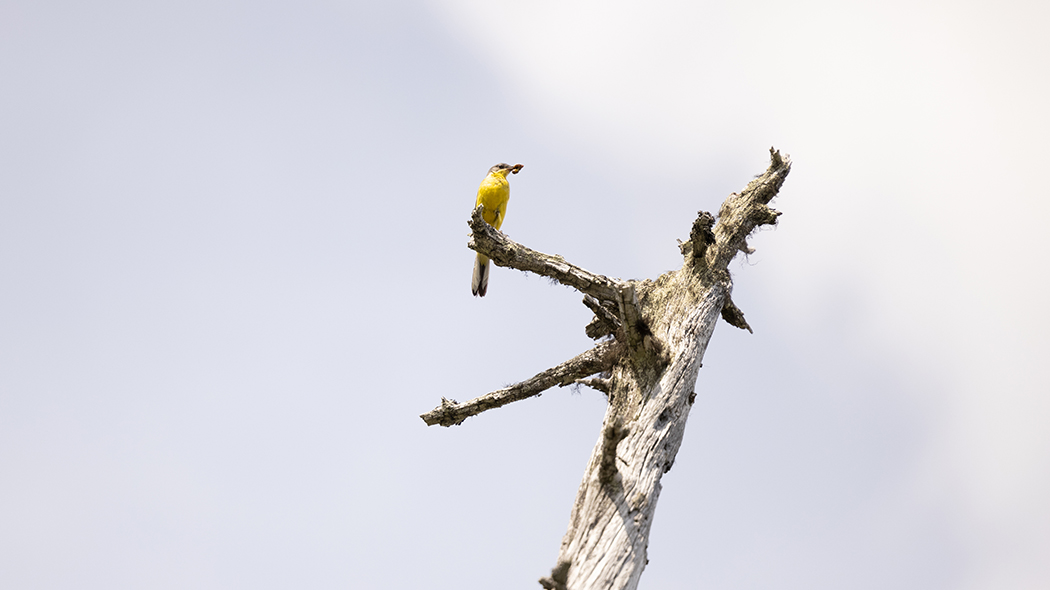 The numerous mire species in the vicinity of the National Park include the crane (Grus grus), whooper swan (Cygnus cygnus) and bean goose (Anser fabalis). Many species of waders frequent the flark-surfaced aapa mires. A large number of passerines that favour open terrain, including the yellow wagtail (Motacilla flava) and meadow pipit (Anthus pratensis) also nest in the mires. The open aapa mires and large numbers of birds make attractive hunting grounds for birds of prey. The emblem species of pine mires on the edges of more open marshes is the eastern little bunting (Emberiza pusilla), the population of which is particularly strong in Salla.

Located near the eastern border, Salla is also home to the bear, the king of the forest. Signs of bears can be observed in the area, including demolished ant hills. You are more likely to come across an elk or reindeer, however. The beard lichen growing on the branches of spruce trees provides important winter grazing for reindeer.

The spruce marks the tree line on the fells; where the forest cannot survive on fell tops, there is no obvious birch zone. Typically of highlands, the spruce forests are sparse, filled with light and easily accessible. The trees resemble candles with their short branches. This shape helps the spruces to cope with a crown snow load and sustain less damage than trees with longer branches.

Koillismaa has some of the heaviest snow falls in Finland, and extremely cold temperatures are common. In winter, moist air masses in the highlands of Salla condense in spruce tops, which may collect up to hundreds of kilos of snow and ice. This crown snow load breaks the tops and trunks of trees, which can be seen in the spruce forest as an abundance of standing dead trees and decaying and fallen trees. Decaying wood is vital for many threatened fungi and insects. 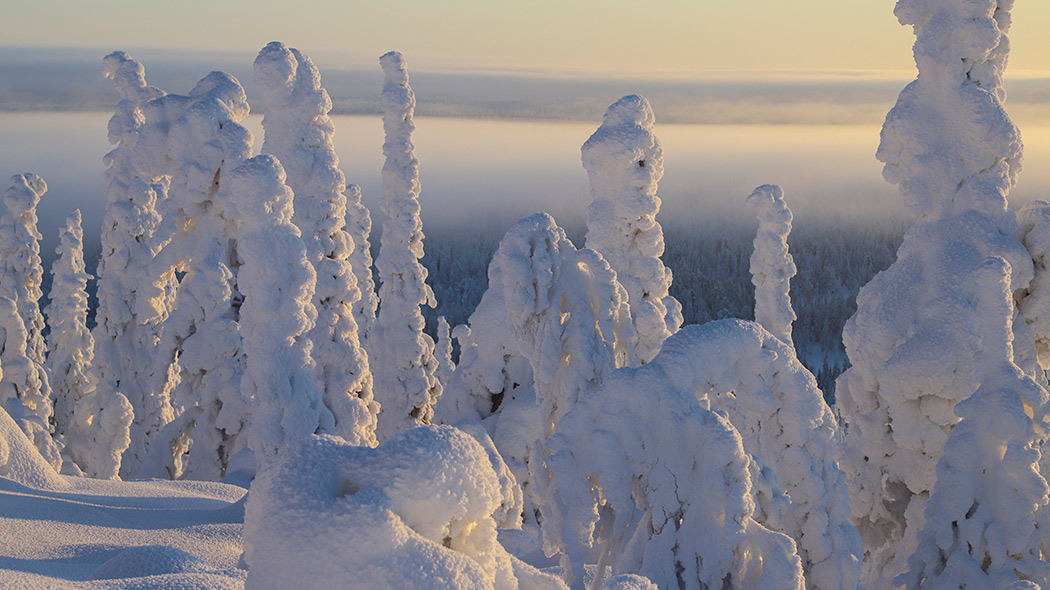 Large protected areas on two sides of the border 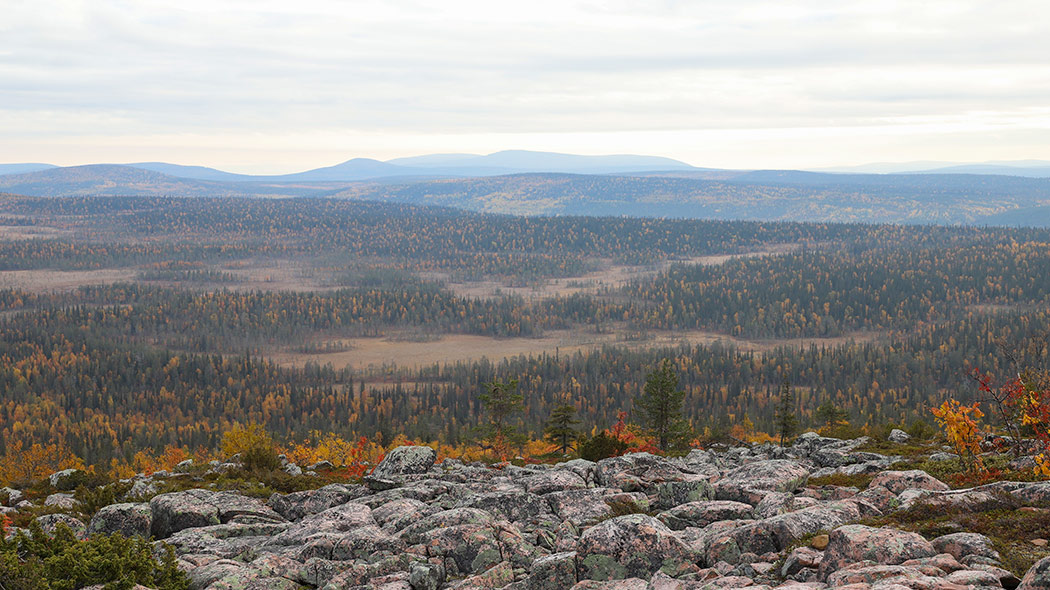 Other protected areas in the vicinity:

The municipality of Salla is like Lapland in miniature. To the south is Oulanka with its rivers and high biodiversity, while the middle part is a barren plateau with spruces forests, hills and mires. Fell views open out in Tuntsa in the north. Slightly over 18% of the area of Salla municipality is protected at different levels. 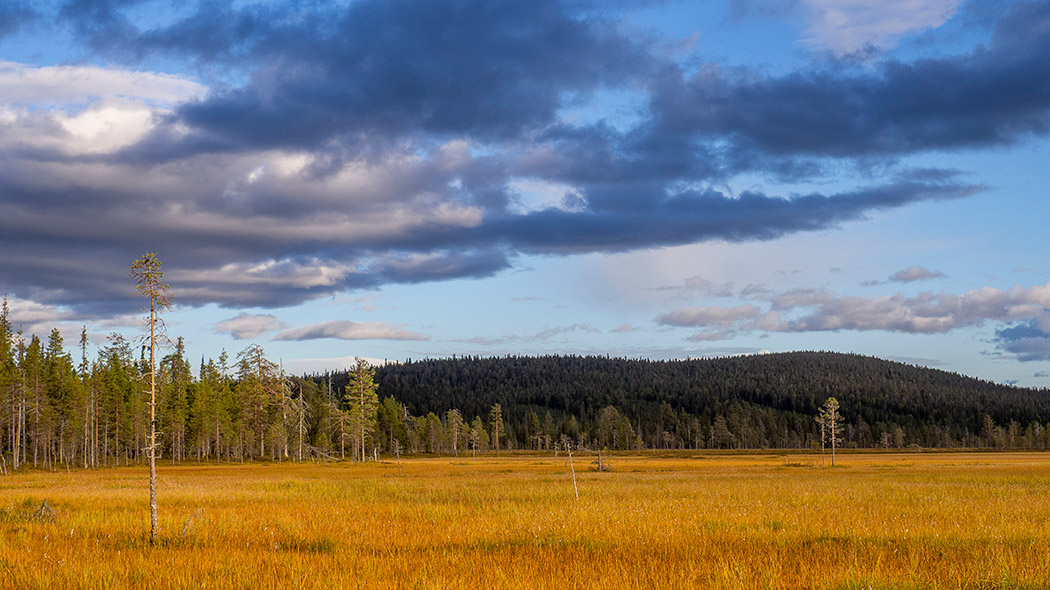 This area includes the mires of Löytöjänkä-Suksenpaistama-aava and the old-growth forests surrounding them, the total surface area of which exceeds 60 km². Numerous small streams run through the large open mires, and nutrient-rich fens and threatened plant species are found in this area.

The emblem of Salla National Park is Capercaillie