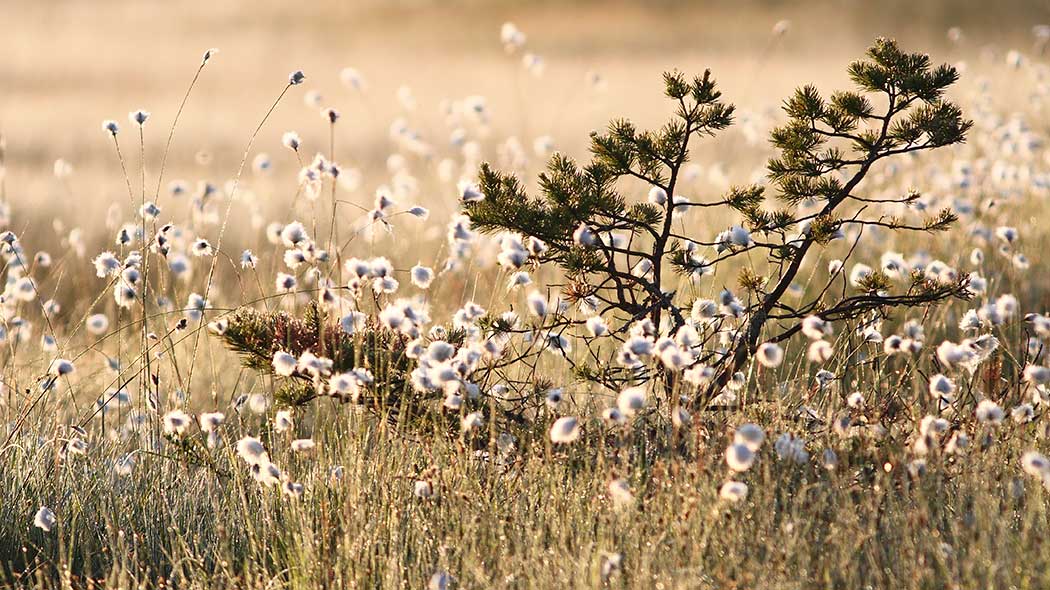 The Patvinsuo National Park is a wilderness area in Eastern Finland. The landscape is a patchwork of expansive mires and beautiful, deep forests. All of Finland's large predators can be found in the park. 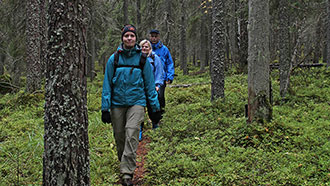 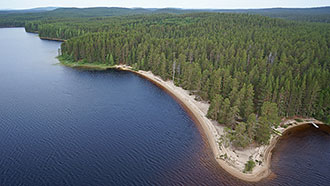 The sandy beaches of Lake Suomunjärvi are located in the very heart of the park. The shoreline is 34 km's long. Kaunisniemi (shown here) can be found near the nature hut. 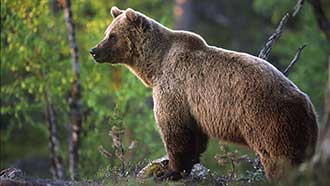 The emblem species of the National Park is known by many names in Finnish: Kontio, Otso... Although you might see their footprints, bears are very good at keeping out of sight. 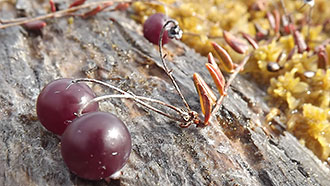 Tart cranberries, sweet cloudberries. The delicacies that grow in mires suit every taste. Enjoy the changing colours, scents and mire landscapes the whole year round! 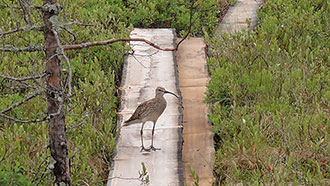 On spring mornings, the bogs are alive with air traffic, when thousands of birds arrive in the park bogs to nest or rest on their migratory journeys. 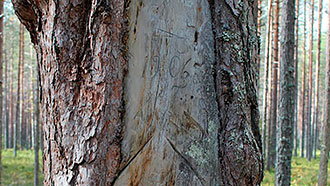 A memorial tree is a large, lone pine tree, into whose trunk important dates are carved. The oldest carving on a memorial tree in Patvinsuo is from 1804 and the most recent is from 1973. 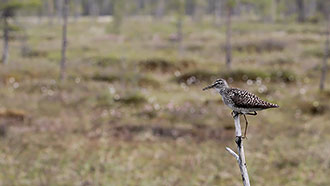 Remote mires augment the national park. There are no marked trails in the wilderness mire reserve. Visitors must observe 'Everyman's Rights' when moving through the area. 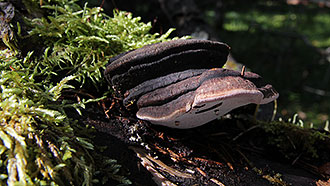 Europe's first restoration burns were done in Patvinsuo in 1989. The forest hectare burned at Lahnasuo mire resulted in a magnificent concentration of polypores. 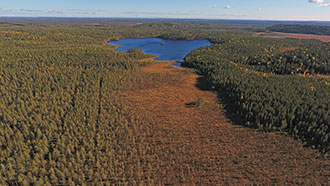 The mires in the vicinity of Lake Nälmänjärvi were drained before establishment of the national park. The mire areas have now been restored to their natural state by filling in the drainage channels. 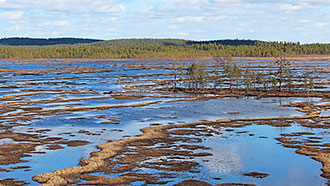 Patvinsuo National Park is a participant in the North Karelian Biosphere Reserve, the Ramsar Convention on Wetlands of International Importance. It is also an Important Bird and Biodiversity Area (IBA). 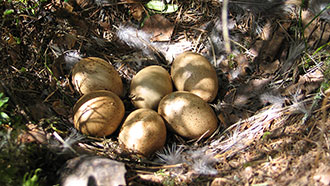 The Autiovaara old-growth forest has been allowed to develop undisturbed for more than a hundred years. Among the spruce trees with beard lichen and the old pine trees, there are also large aspens growing in the area. The trees live long, die, fall down, and finally decay. The cycle resumes when the clearings left by the dead trees give rise to new saplings which grow toward the light.

Such a forest offers many nesting places for woodpeckers and other birds that make their nests in holes in trees, such as the rare red-breasted flycatcher. Inside the hollow aspens in their own little world lives a diverse array of fungi and insects. Dozens of species of lichen adorn the tree trunks and branches. When the trunks fall, an array of polypores settle in. 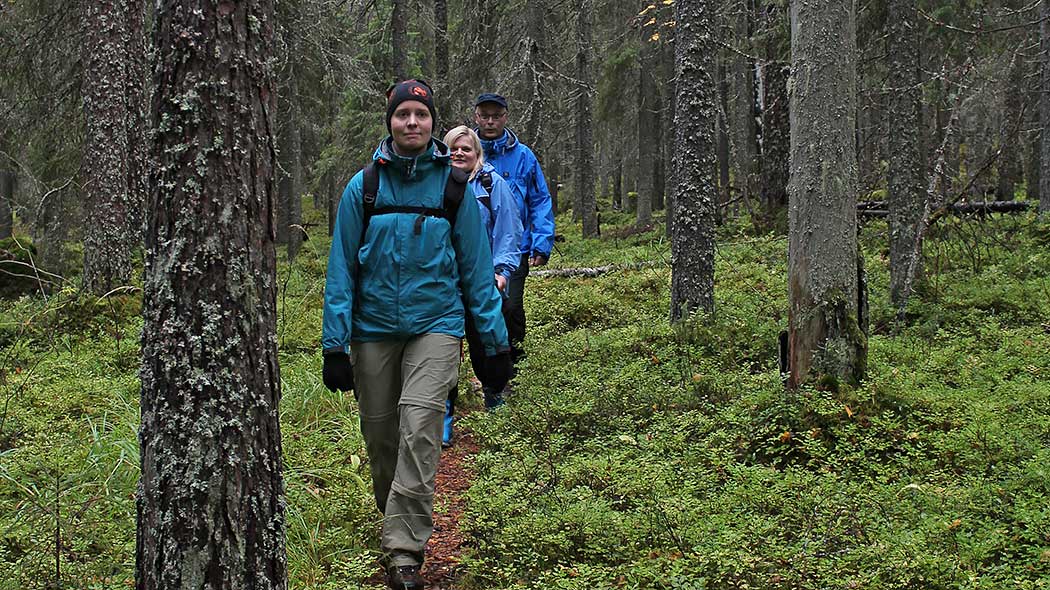 The forest buzzes with life, of which we humans only have a vague idea. On the Autiovaara Spruce Trail you can admire all of this in peace, and with your senses fine-tuned. There is no need to hurry in an old-growth forest.

Lake Suomunjärvi is in a ridge area that formed in the late part of the last ice age. There are about ten islands in the lake with labyrinthine inlets. There are about 24 kilometres of sandy shoreline. The depth of the lake varies, in the middle there are areas that reach depths of 27 metres, but there are also banks shallow enough to wade in. Lake Suomunjärvi is in excellent shape ecologically. It has not been harmed by human activity. 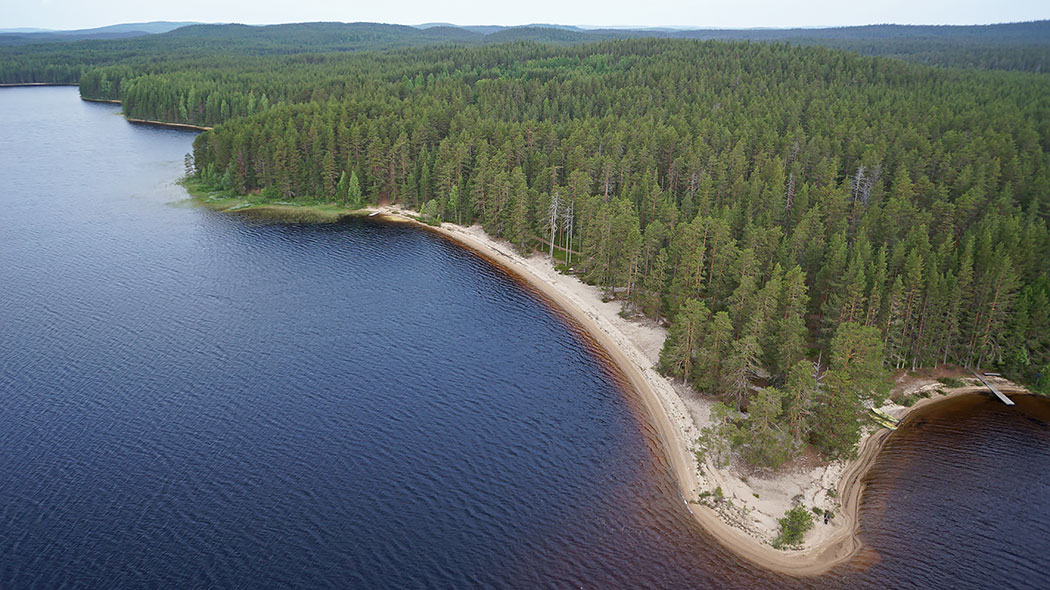 Fish in the lake include vendace, whitefish, perch, and pike.  Fishing for vendace has been a favourite local tradition. The vendace population varies from year to year.

The Suomunkierto loop trail circles the lake. It mainly runs in the fairly even pine forest, but in places it touches the shore of the lake. Swimming on all of the sandy beaches of Lake Suomunjärvi is possible at one's own risk, but there are no official beaches for swimming in the area.

Iso Hietajärvi, another lake in the northern part of the national park, also has a sandy bottom and clear water. It is part of the Hietajärvi Integrated Monitoring area. In the monitoring area human impact is kept to a minimum. Moving in the area is restricted to marked trails except for cloudberry picking season. Fishing is prohibited in Iso Hietajärvi for the same reason.

Patvinsuo has a flourishing bear population. Footprints of the park's emblem animal are a frequent sight, but the lord of the forest itself is skilful at keeping hidden. Only by a stroke of great luck will a hiker see a bear. The bear walks around usually in twilight and at night. In the summer, a male can wander hundreds of kilometres in a short period of time. Bears are also skilful swimmers. 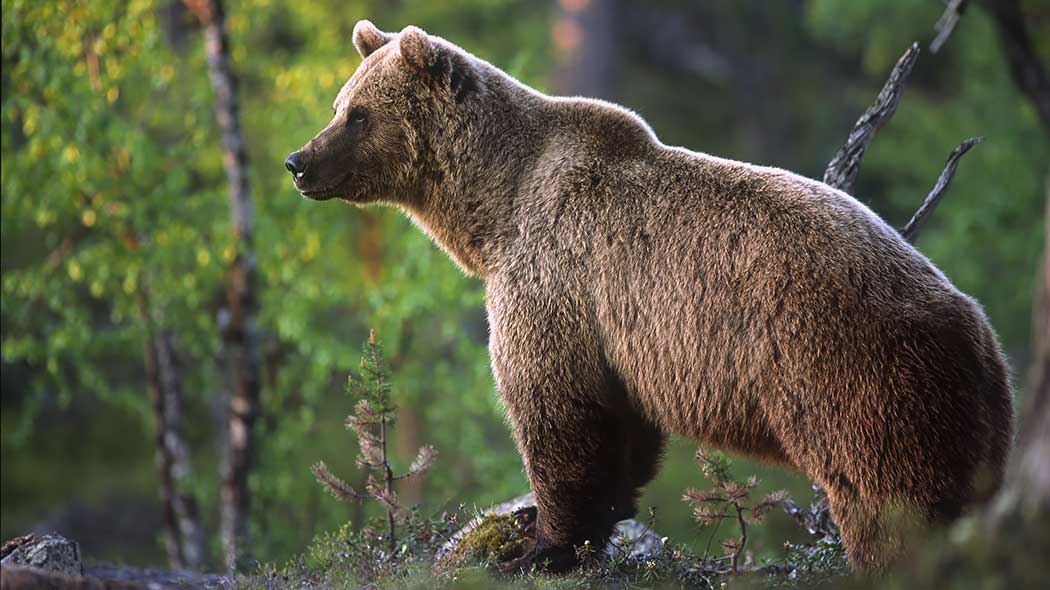 The bear is Finland's national animal. It is the largest predator in Finland and all of Europe. The omnivorous bears feast on berries, ants, larvae, roots, and honey. In the autumn, bears go into their dens to hibernate. They will sleep for six months without food or drink. In January or February 1-4 cubs are born in the den. They follow their mothers closely throughout the following summer. They spend their first winters in the same dens as their mother.

Wolves, lynx, and wolverines are also known to wander regularly in the park. Footprints in the snow are their calling cards. In the summertime moose come to bogs in the national park to eat.

The nature of the swamps of the national park is varied: in addition to open raised bogs and aapa mires, there are pine-covered sloughs and forests dominated by spruce. Swamps cover more than half of the surface area of the park.

Cloudberries are the most sought-after gift of the swamps. The berries develop on the female flowers, but not without the help of male flowers that provide the pollen. On treeless swamps it is frustratingly common for frosty nights in early June to freeze the cloudberry flowers. Occasionally, heavy rains will knock the petals off the flowers, making them invisible to pollinators. 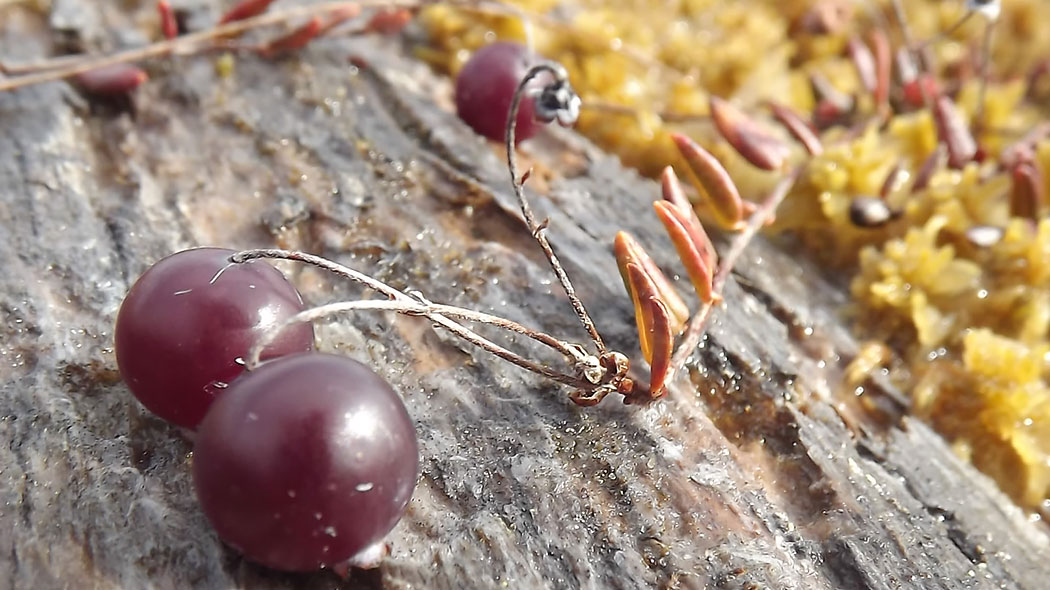 Tart cranberries can be found on wet treeless swamps and in sloughs with a sparse tree population. The berries do not ripen until the first frosts, in late September and early October. Many birds migrating in springtime happily eat berries from a previous year.

Prolific bog bilberries have popularly been considered unfit for human consumption.  But there is no need! The mild-tasting berries are rich in vitamin C, among other things.

The swamps of the national park offer a multitude of nesting and feeding places for numerous species of birds. Many species that have disappeared from southernmost Finland survive in Patvinsuo. These include willow grouse, European golden plover, and whimbrel. Extensive treeless swamps also attract migratory birds that rest and eat in the area. 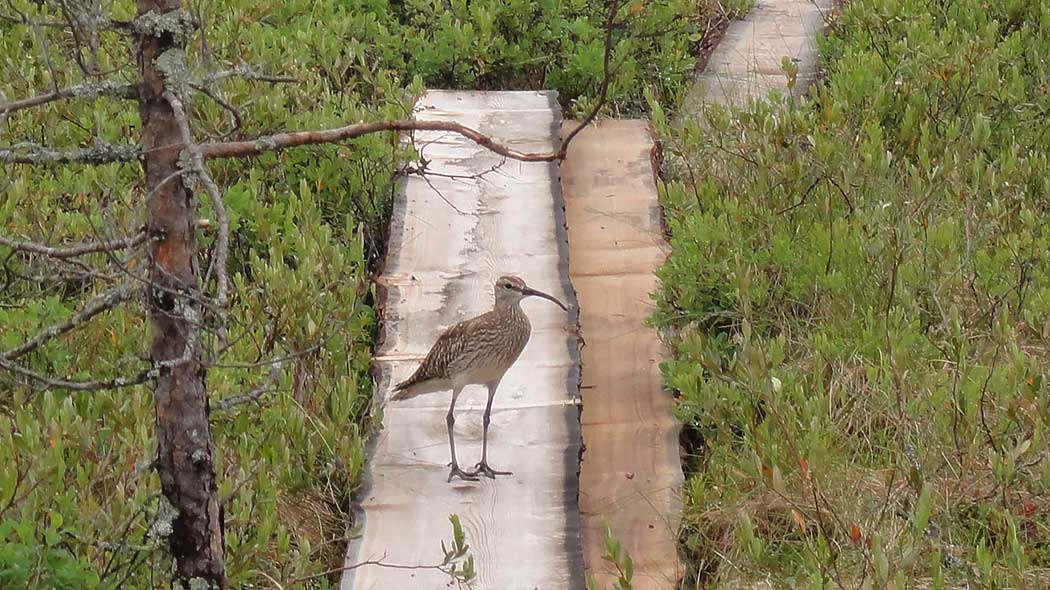 In the spring, a polyphonic concert of birds returning from their migration can be heard from the swamp. Magnificent views open up from the Teretinniemi bird tower for those who want to observe swamp birds. In June, bird couples quietly start nesting. When their chicks have hatched, waders can be heard again as they warn their offspring about dangers.

When the neighbouring Patvinsuo National Park was founded, in 1982, the Kissansuo-Raanisuo-Tohlinsuo Mire Reserve was also set up. Kissansuo and Tohlinsuo have places with more nutrients than on the national park side. In the summer, the area is home to birds typical to the swamps: meadow pipits, western yellow wagtails, and several species of waders, such as common greenshanks and whimbrels. 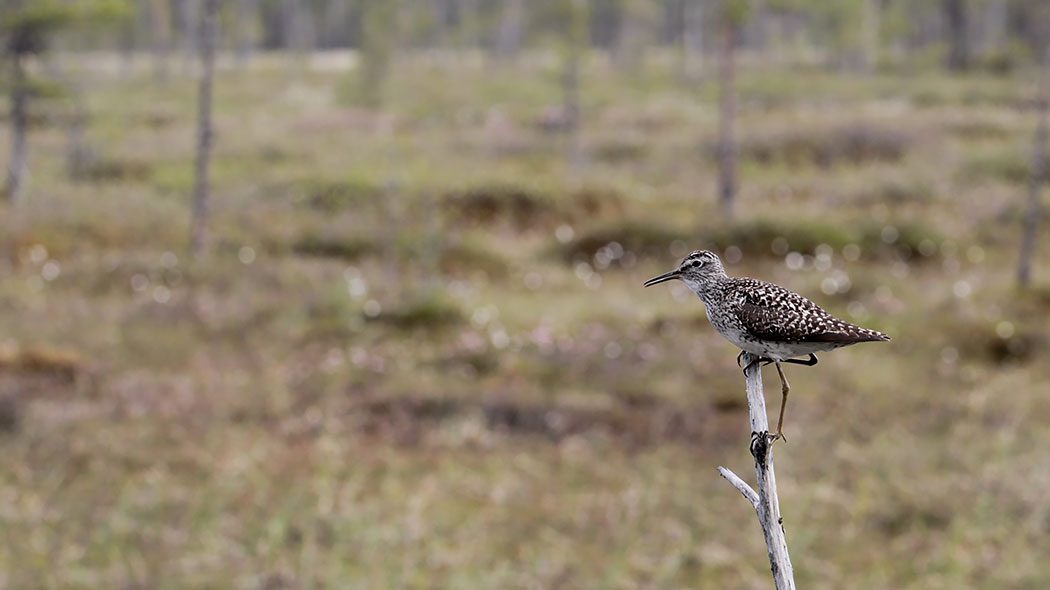 The mire reserve does not have marked trails or other recreational structures. The nearest lean-to shelter and campfire site is in the south-east of the reserve, along the Susitaival trail on the edge of the Lutinjoki River. The area is accessible under Finland's everyman's rights.

Drained swamps in the mire reserve have been restored. The drainage ditches were filled up using a backhoe in the late summer of 2006. Vegetation and other species typical of wetlands have started to recover from the disturbance caused by the restoration work, and the future of the swamps looks promising.

Forest has also been restored in Tohlinsuo: A clump of trees covering 20 hectares was burned in 2006. As a result, a large amount of decaying wood was left behind in the forest to benefit thousands of species of forest fauna and flora. Plenty of new small trees have sprouted in clearings from the restoration burn. The forest will increasingly resemble its natural state as time passes. Read more how the Kissansuo-Raanisuo-Tohlinsuo Mire Reserve Completes the Mire Entity of Patvinsuo National Park.

Two forest islands surrounded by swamps were burned in the Patvinsuo National Park in 1989, one in Lahnasuo and the other in Surkansuo. These are the first restoration burns of forest in Finland, and anywhere in Europe. Restoration burns replicate natural fires caused by lightning strikes. They kill some of the trees, while leaving others to grow. 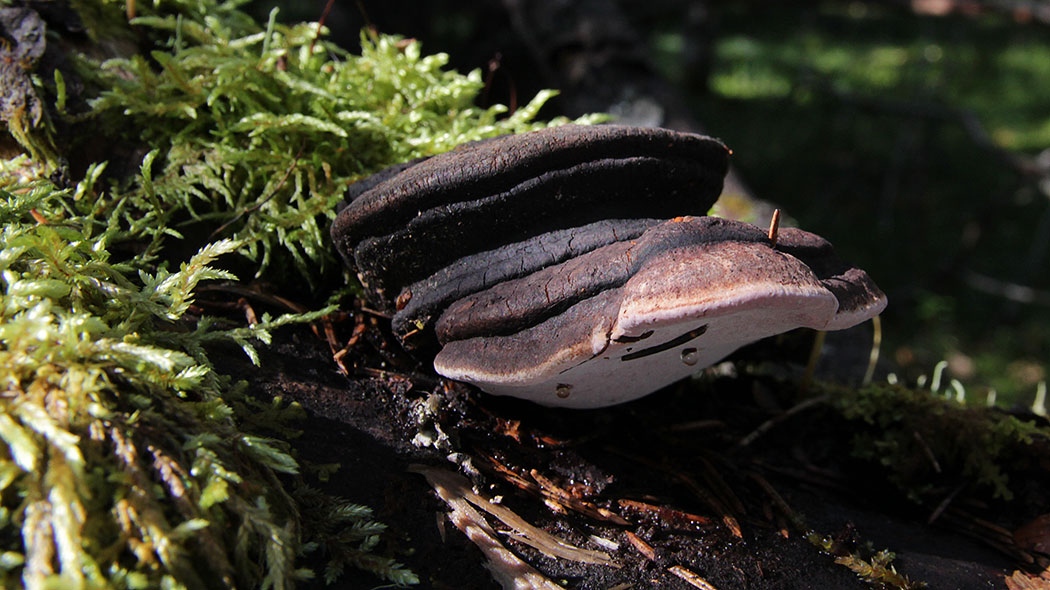 Over the years a total of 96 different species of polypores have been found on the Lahnasuo stand, which is a record for any individual hectare of forest land in Finland! These include several endangered species such as Antrodia primaeva, Diplomitoporus crustulinus, Skeletocutis stellae, as well as eastern specialities, such as the Trichaptum pargamenum.

Restoration burning is the best way to diversify the structures of forests that have undergone felling. Trees killed by the fire are important habitats both for polypores, and for many endangered and rare insects. All residents of dead trees have their important tasks in the recycling of forest nutrients.

In the western part of Patvinsuo National Park, near Nälmänjärvi, wetlands had been drained before the protection areas had been set up. Now the ditches have been filled. They have also been removed from base maps, but the filled-up ditches can still be seen in aerial photographs. They should be crossed where the dams are located. 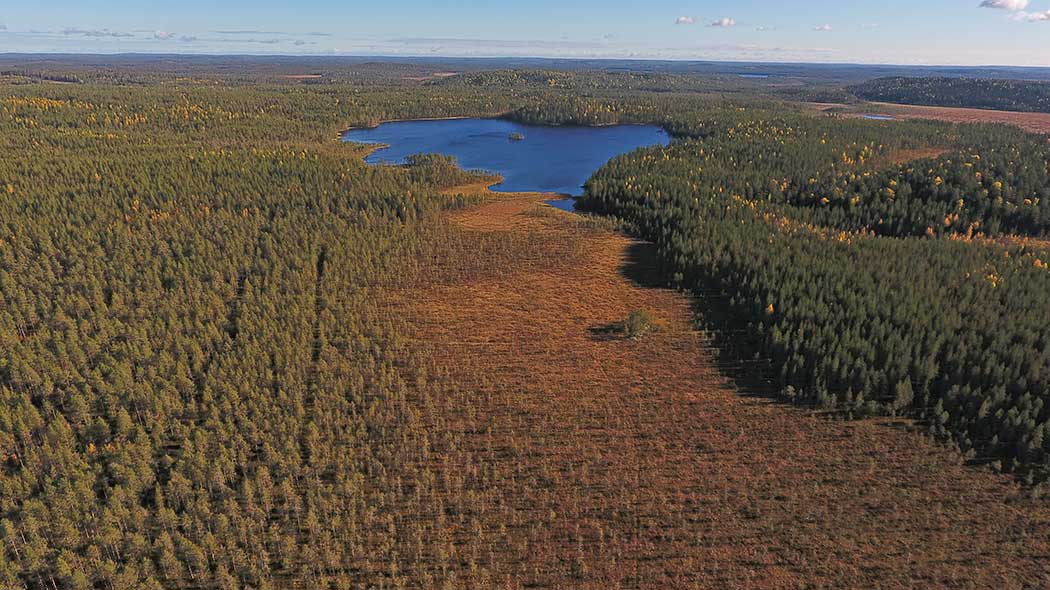 Restored swamps do not immediately return to their former state, but the water surface immediately rises to a higher level than in a drained swamp. The rising water starts the return of the structure swamp vegetation, other species, and trees. Aerial photographs show that the restoration seems to be advancing at a good speed, after more than ten years since the work was done. The filled-up ditches are covered by vegetation, and sphagnum moss is thriving. It is unlikely that the former ditches will even be distinguishable from the rest of the area in 100 years. This is not a long time in comparison with the millennia that wetlands take to develop!

The Ramsar Convention (rsis.ramsar.org) also protects the bird population and the diversity of the wetlands and water areas.

The Hietajärvi area of the northern part of Patvinsuo is the second of two integrated monitoring research areas of the Finnish environment. The international programme monitors changes in the air, on land, and in the water in 50 monitoring areas in 16 countries. 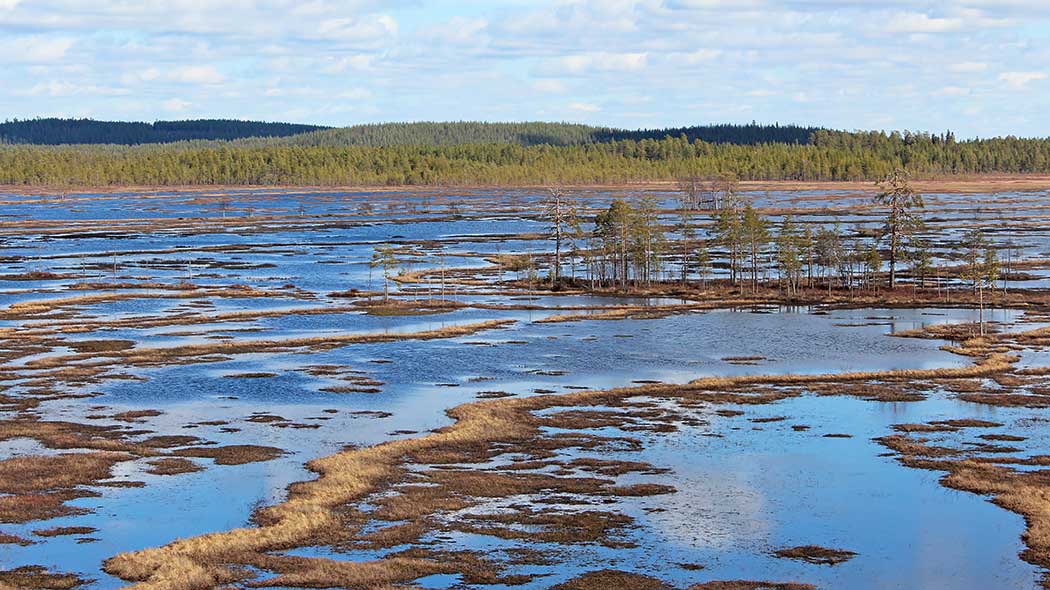 The North Karelia Biosphere Reserve (www.kareliabiosphere.fi) covers the municipalities of Ilomantsi and Lieksa as well as Joensuu and Tuupovaara. The purpose of the Biosphere Reserves is to promote the preservation of natural diversity and to develop social, economic, and ecological sustainability. The Biosphere Reserve Programme is maintained in Finland by the Finnish Ministry of the Environment and the ELY Centres.

Restricted areas have been set up in the large swamps of the national park, Patvinsuo and Lahnasuo in order to secure peaceful nesting for birds. In the nesting period for birds (1 March -  10 July) only marked trails in the restricted areas may be used. If you plan to take part in springtime swamp skiing, make sure you check the locations of the restricted areas on a map! 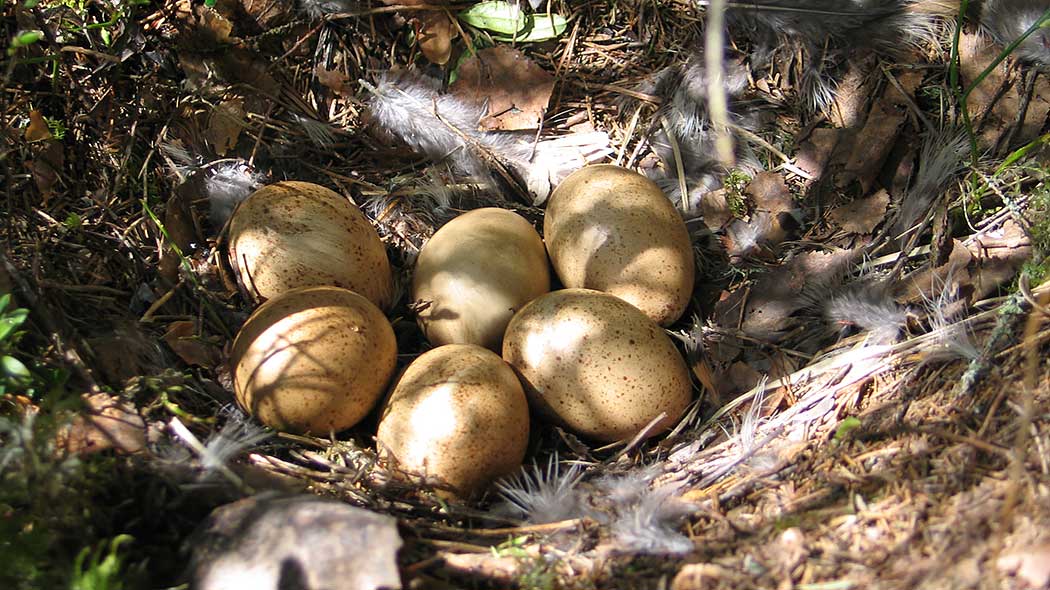 The goal of UNESCO's Man and the Biosphere (MAB) programme is to develop the living conditions of the area's inhabitants while maintaining the protection of nature and the environment.