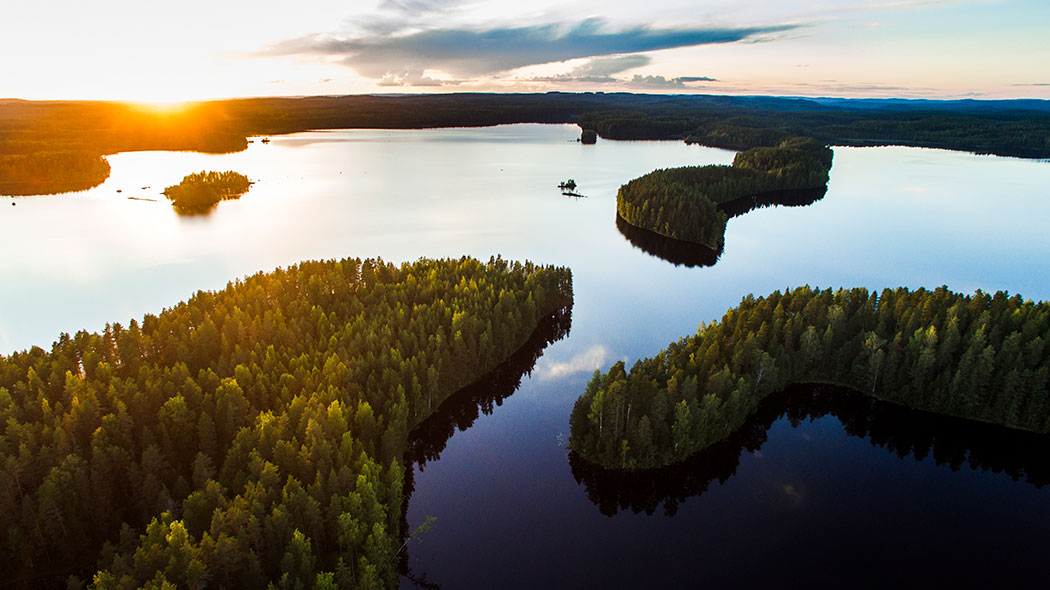 The Leivonmäki National Park is like a miniature Central Finland. Here the nature encompasses forests and mires, lakes, white-water rapids and stunning eskers. 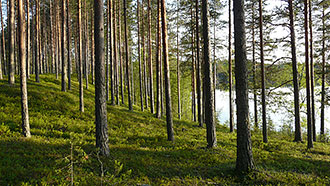 It is easy to hike on the light-filled slopes of the esker. The park’s most famous attraction, the Joutsniemi Ridge, pushes into the Lake Rutajärvi. The beautiful ridge emerged during the ice age. Read more > 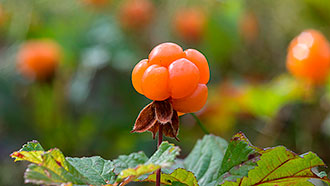 To the south of the Lake Rutajärvi spreads a beautiful open mire. There, cloudberries and cranberries ripen during summer and european golden plovers build their nests. Read more > 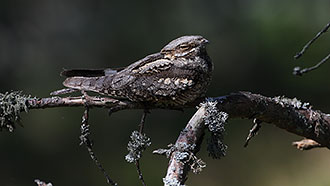 The European nightjar at Leivonmäki

The regional emblem of the National Park is the European nightjar. The grey bird is a master of disguise. You can hear it’s song in the early hours of a summer night. Read more > 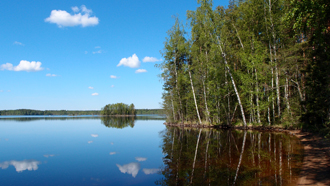 The decrease in water levels in Lake Rutajärvi in the 19th century still stands out as a rocky wall. Many species of birds nest in the tranquil shores and islands. Read more > 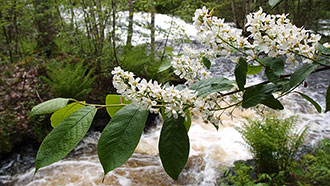 The hidden pearl of the National Park is the clear Rutajoki river with its white-water rapids. Read more > 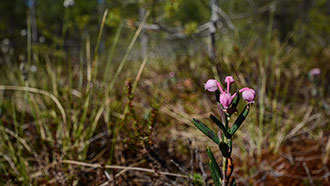 Returning the mires back to their natural state

200 hectares of mires have been restored. The hare's-tail cottongrass (Eriophorum vaginatum) returned to the area first, closely followed by peat mosses (metsa.fi). Open > 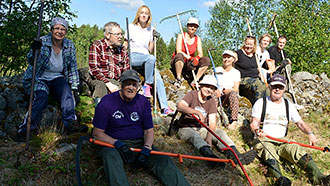 Together we achieve more

The Friends of the Leivonmäki National Park is an active association. Each year, groups of volunteers eradicate lupines (Lupinus polyphyllus) and scythe the fields of Syysniemi (leky.suntuubi.com). Open > 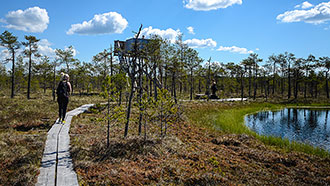 Birds that are nesting require space. There is ban on all movement in the restricted zone between 15 April and 15 July. However, the Kirveslampi trail and the birdwatch tower are in use all year round! Read more > 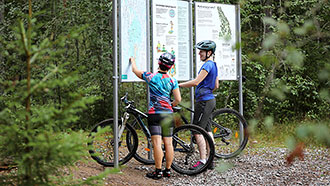 National Parks are conservation areas. Always keep your pet on a lead, take your rubbish away with you and be considerate to other people visiting the park.
Read more > 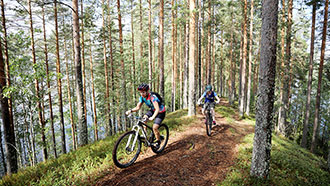 Head out on two wheels! The mountain biking trail at Selänpohja is an excellent route for cycling. Please stay on the path so the surrounding environment is protected.
Read more >

Eskers, lakes, mires, forests - all typical features of Central Finland’s nature can be found in Leivonmäki National Park. You can familiarise yourself with all this on nature trails in the park during a single visit. The most rugged forests of the park are located in Syysniemi, at the northern tip of the area. Hietajärvenkangas around Selänpohja and the Joutsniemi area are home to old pine forests. The same chain of eskers continues south of Lake Rutajärvi as Haapasuonharju, which has a length of several kilometres. In the pine forests of Leivonmäki, you may hear the beautiful singing of mistle thrush or see as a black woodpecker is carving a nest hole for itself. 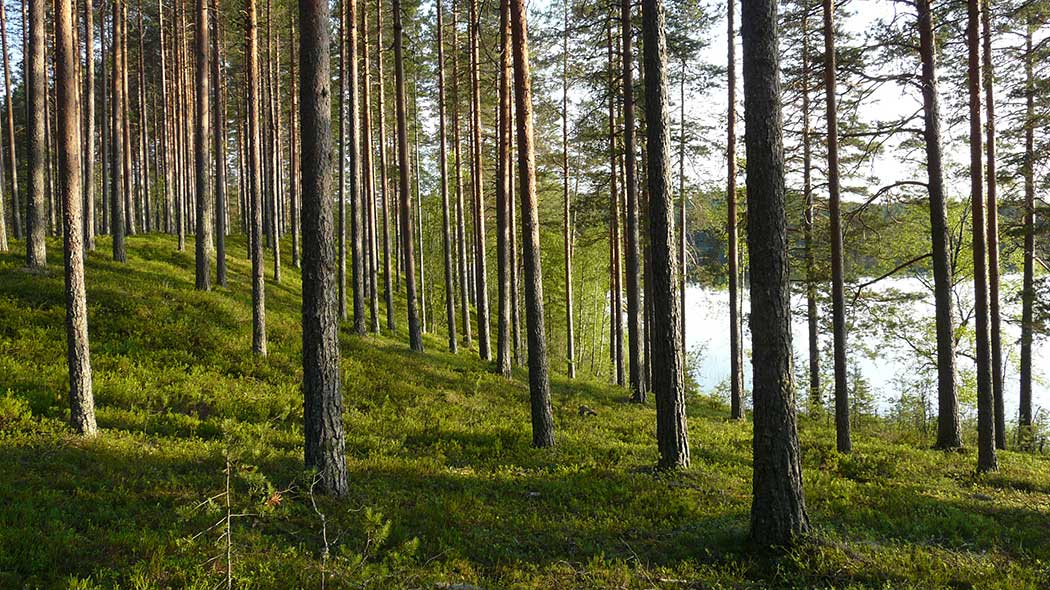 The long and narrow eskers in the area were formed during the last Ice Age as the glacier was melting. The Ice Age ended 10,000 years ago. Eskers make diverse habitats for vegetation. The conditions of the habitats vary according to the direction and steepness of slopes. The esker forests of Leivonmäki mostly consist of open, dry pine forests. Shady "suppa" holes on the slopes of the esker are marks of large blocks of ice, which got buried in the sand during the Ice Age.

On the northern border of the national park, in the central and eastern parts of Syysniemi, forests are more spruce-dominated and the mires smaller. In this forest-covered area, the nest holes carved by woodpeckers also provide homes for tits and flying squirrels.

The call of cranes in spring is a sign that snow is already melting in the Haapasuo mire. During the spring, other birds nesting at the mire, such as European Golden Plover (Pluvialis apricaria), Wood Sandpiper (Tringa glareola) and Hen Harrier (Circus cyaneus), also return from their wintering grounds.

In the summer months, the large continuous stretches of Haapasuo in the southern part of the national park is teeming with life. The middle of Haapasuo is characterised by stunted trees and its vegetation is adapted to high and fluctuating water levels. Peat moss (Sphagnum) and Hare’s Tail Cottongrass (Eriophorum vaginatum), which can be easily recognised from its fluffy white seeds in June, are the most typical species growing at the open mire.

Shrubs such as the Bog Whortleberry (Vaccinium uliginosum), Leatherleaf (Chamaedaphne calyculata) and Dwarf Birch (Betula nana), thrive in the pine-dominated mires at the edges of Haapasuo. 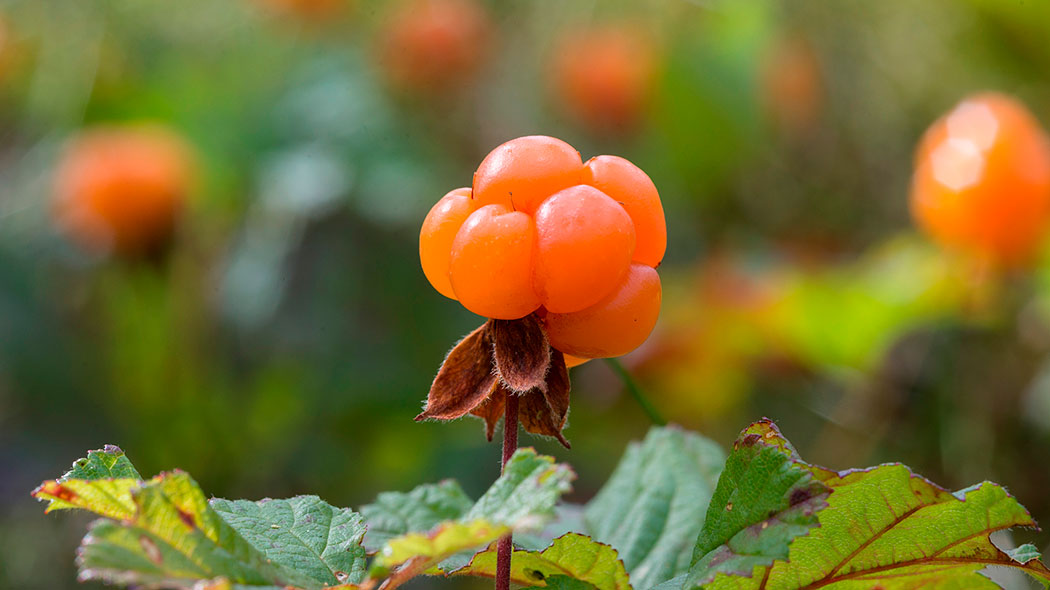 Conservation has not always been a top priority in Haapasuo. In the 1960s, ditches were built in the mire for forestry purposes. The aim was to drain the mire and to boost the growth of forest species, such as pine. Protecting original nature is the guiding principle in the management of national parks and for this reason, the ditches have been blocked and the mires restored. The changes have been quite rapid: peat moss (Sphagnum) and hare’s tail cotton grass are again growing at Haapasuo and, as in the past, you need rubber boots when walking there.

Haapasuonharju Ridge, on the western side of Haapasuo Mire, is dominated by rugged dry pine forests, where the good Lingonberry (Vaccinium vitis-idaea) harvest attracts people to pick berries in the autumn. Like in Syysniemi, in the middle of the more than 100-years-old pine forests you can see small esker lakes, and a diverse tree stand grows in depressions and "suppa" holes, which were made by melting ice after the Ice Age. The sandy Vartijamäki road on Haapasuonharju Ridge is a great scenic road through the southern part of the park. The emblem bird of the National Park, the European Nightjar (Caprimulgus europaus) nests in the old sunny pine forests. Haapasuonharju Ridge is the most important territory area for the Nightjar in Central Finland.

The European Nightjar at Leivonmäki

When walking on an esker during the light-filled nights of early summer, you may hear a sound resembling the whirring of a spinning wheel. The almost nonstop sound is the mating call of a nightjar (Caprimulgus europaeus). The bird is only on the move in the night and during daylight hours it rests on a tree branch or on a fallen trunk, relying on its camouflage. In the hours after sunset, nightjars hunt night butterflies and other nocturnal insects. 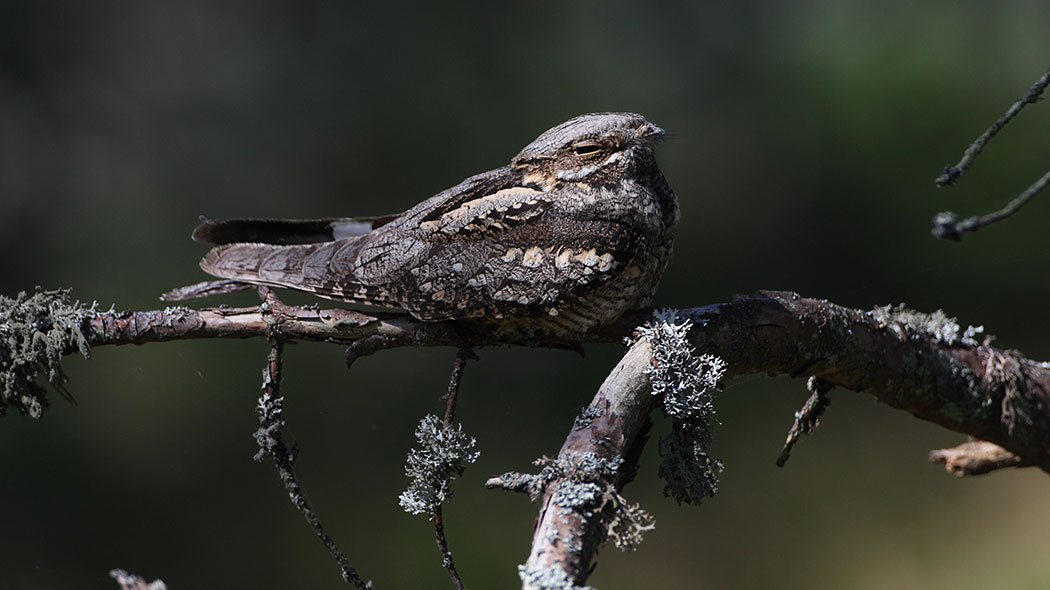 Nightjar does not build a nest as it lays its eggs on a shallow recess on the ground. The species prefers dry pine forests and pine forests on eskers and in rocky terrain. Nightjars nest on the Haapasuo esker in Leivonmäki every year.

Nightjar is well-adapted to changes in weather during Finnish summers. As not many insects fly in rainy and cool weather, a lack of food is a real risk, so the nightjar enters torpor where its body temperature may drop to below 10 degrees Celsius. August–September is the time for nightjars to return to the warmth of the south. They return to Leivonmäki from the African savannas in May–June. 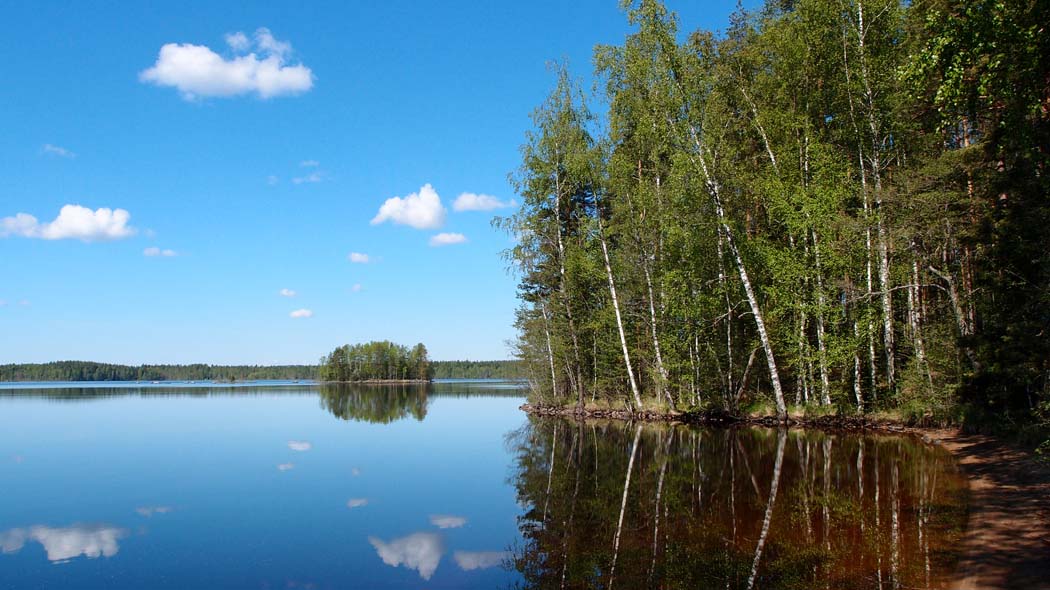 Lake Rutajärvi (surface area 1100 hectares) divides the National Park into two parts. Lake Rutajärvi is a clear lake with very little aquatic vegetation. Water horsetails and reeds can be seen along some parts of the shoreline. The shores are varied: mires, flood marshes, rocky areas and eskers. The beaches are very rocky in some places – especially on the Syysniemi side.

Its water level has been lowered twice in the end of the 1800s, 4 metres altogether. Following the water level drop, many small islands were formed in the lake. They are important for landscape and nature conservation reasons. The rocky old shoreline can be seen, for example, along the trail going to Joutsniemi.

Lake Rutajärvi and Lake Päijänne are connected by Rutajoki River with many rapids. Lake Päijänne is 45 metres lower, so at some places the rapids are steep and waterfall-like. The rapids also make the water rich in oxygen, and therefore Rutajoki River is an important breeding area for the Brown Trout (Salmo trutta lacustris), which needs oxygenous water. Rutajoki River has been cleared and a dam built in the upper course. However, the surroundings have stayed almost in their natural state. 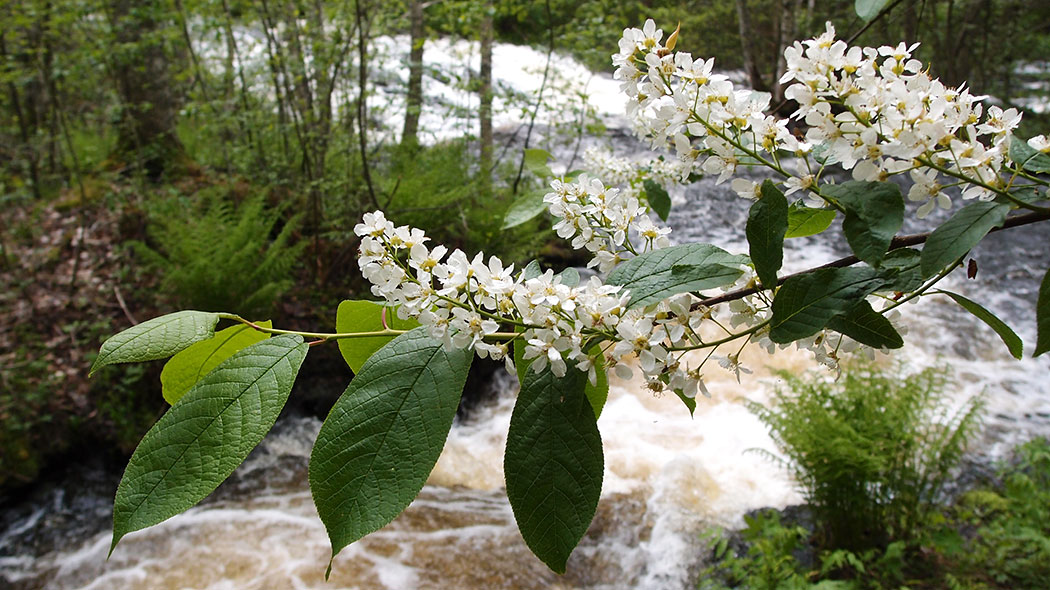