Bishop's Castle Built on an Island

The medieval bishop's castle was originally built as a stronghold and residence for bishops belonging to Finland's Catholic church. The bishops' duties included the maintenance and accumulation of the bishop's table, i.e. the wealth related to the bishop's office, which required a base that could be defended. That is why the castle was built on an island. Produce received by the bishop as bishop's taxes and payments made by tenant farmers were most probably collected in the castle. With its many tenants, the castle resembled the feudal castles of Central Europe: the bishop was the lord of the castle and the warden was the castellan, who was the head of the men at arms.

Records of bishops' stays at Kuusisto date back to 1295. For example, Bishop Magnus I dated a letter on 7 November 1295 in Kuusisto. No detailed information is available on the construction, but the fortification was presumably made of wood in his era.

Construction of the stone castle began in the early 1300s. The materials came from the island itself and the rocky slopes of the Kappelimäki and Myllykallio hills nearby. As everyone came to the castle by sea, the side facing the sea was the most important direction of defence. In the late 1300s, the castle was almost as large as it was ever going to be, but the buildings and walls were still low and modest compared to later periods. A palisade made of thousands of poles was built in the sea.

Glory Days of the Bishop's Castle in the 1400s

The time of bishop Magnus II Tavast (1412–1450) included the glory days of the Kuusisto castle.  Magnus II Tavast's influence as the bishop of Turku was unchallenged and he had a say in many issues involving Finland.

The Bishop's chronicle states that Magnus II Tavast built most of Kuusisto castle. In his era, the castle was fortified as a stronghold of trade and defence: for instance, a large, four-room palace was built at the southern end of the main castle and the wings and walls were raised. The main entrance to the castle moved south during this period as the land isthmus grew towards the island of Kuusisto due to land uplift. In its glory days, the castle was a luxurious palace beyond the wildest dreams of many aristocrats in the country. The surrounding lands of the estate and the manor farm on Kuusisto island made the castle a significant and prosperous economic centre.

In 1344, Bishop Hemming dated his letter "Datum apud curiam nostram Custu", while  in 1440, his colleague Magnus II Tavast dated his: "Datum in castro nostro Kusto". The Latin word for manor, curia, had been replace by castle, castrum, which was used thereafter. This change probably reflects the change in the significance of the location.

The castle was devastated by fire on at least two occasions: Novgorodians burned it down in 1318 and, in 1485, there was another fire that destroyed some of the castle's valuable archives. After these fires, the castle was restored.

While Maunu III Särkilahti (Magnus Nicolai) was bishop in 1489–1500, the construction and fortification of the castle continued at a high cost. Modifications included raising the castle, building arches in the rooms and completing the baileys.

The castle was at its largest in the early 1500s. Laurentius Suurpää, Johannes IV Olavi and Arvid Kurki (Arvidus Korke) ruled in the castle, with its three-storey main castle and palace, chapel and outbuilding wing.  Outside the main castle, there were three baileys equipped with 5-6 metre high walls, several towers and a "modern" ten-metre round turret in the southernmost bailey. Outside these fortifications, there was a palisade in the sea to prevent the enemy from landing. 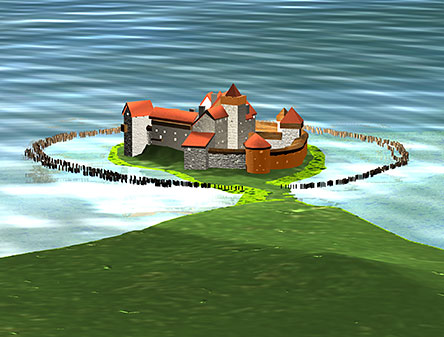 Downfall of the Bishop's Castle

The last bishop to reign as the lord of Kuusisto castle was Arvid Kurki (1510–1522). Arvid Kurki meddled with secular state politics. In the end, he had to flee and was shipwrecked and drowned. This marked the end of the reign of Catholic bishops in Kuusisto. They were replaced by Danish representatives of secular power.

The Danes were lords of the castle for one year until it was conquered by King Gustav Vasa in 1523. The reformation broke the political and military power of bishops, as well as the church's economic power. In the midst of the turmoil of the Reformation, King Gustav Vasa ordered the castle's demolition in 1528.

Stones from the Kuusisto castle are known to have been used to construct Turku Castle and Piikkiö Church but it is not known how many stone cowhouses, cellars or footings in the surrounding region are made from stones that originated in the walls of the Kuusisto Bishop's Castle. As late as in the late 1800s, thousands of bricks were collected in Kuusisto and taken to Åland as the Kastelholma castle was being repaired.

New Era at the Castle Ruin 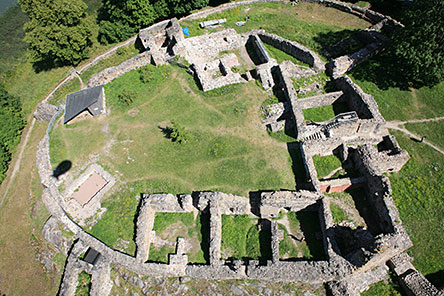