The History of Kajaani Castle

At the turn of the 16th and 17the century, Sweden strived for access to the Arctic Ocean. At that time, the border in the north was undefined, and Olavinlinna (‘St. Olaf's Castle') was Sweden's northernmost fortress on the Russian border. The construction of Kajaani Castle was started by order of King Charles IX of Sweden simultaneously with the construction of Oulu Castle in 1604.

The castle was built as an administrative centre which would secure the north-eastern part of the Swedish Empire. The castle served not only as a defence fortification but also as a base for the empire, with its eye on the Arctic Ocean. In addition, it served as a carefully guarded route over the fast-flowing Kajaaninjoki connecting the southern and northern parts of the Oulujärvi water system.

The castle was presumably taken into use in 1610 although it was not yet completed. Its construction continued, and by 1620, there was a large castle on the island, with a total length of 39 metres. Its walls were 3.6 metres thick and it had two round turrets, towers projecting from the wall, at its ends.

The dwellings inside the castle courtyard were of wood. As space on the island was limited, some storerooms and other buildings were located on the riverbanks. In 1618, the garrison comprised a captain, a lieutenant, two porters and 48 soldiers, who consumed a considerable amount of food and firewood. The garrison was supported by its own farm, the manor farm built in the area in 1610.

The construction of the castle stopped in the 1620s as interest in the Arctic Ocean waned. Only necessary maintenance measures were taken during the following decades. The troops at the garrison were also reduced.

Johannes Messenius, the Most Famous Prisoner in Kajaani Castle (1616–1635)

The remote Kajaani Castle served as a prison in the 1620s–1640s. Its most famous prisoner was Johannes Messenius, a Swedish historian.

Johannes Messenius was born in Sweden in 1579 or 1580. He studied at the Jesuit school in Braunsberg in Poland and completed his doctorate in Germany. After his studies, Messenius served as a professor of law at Uppsala University from 1609 to 1613.

The reason for the sentence passed in 1616 was suspicion of treachery against the Crown and conspiring with Catholic Poland. In addition, he was suspected of being a member of a secret Jesuit organisation. His family accompanied him to Kajaani for the period of his imprisonment.

In Kajaani Castle, Messenius wrote his main work, Scondia illustrata, the History of Sweden. When he was released from prison, he moved to Oulu to await permission to return to Sweden. However, no permission was granted, and Messenius died in Oulu in 1636. 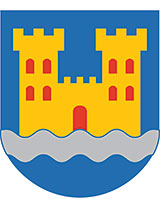 In 1650, the Barony of Kajaani was granted to Count Per Brahe the Younger who served as Governor General of Finland. The town of Kajaani was founded by his order in 1651. The castle was also renovated under his direction. However, the chatelain, the governor of the castle, implemented the renovation measures very slowly. In the 1650s, the garrison was very small: two porters, a sergeant and ten soldiers. Only after the new chatelain, Samuel Lång, took office did renovation and fortification work on the castle start with vigour. The number of troops was also doubled during his rule.

The wooden buildings of the castle were replaced with stone buildings, a new archway was built on the southern side, the inner walls were raised to the level of the outer walls and battlements were constructed on a 3.6-metre thick layer of soil. In addition, the outer walls and the round towers were raised, as they were actually so low that shooting from there into the surroundings of the castle was impossible. The palisade surrounding the island was also renewed during Lång's rule. The renovation measures were taken in order to be prepared for attacks by the Russians. After 1674, renovation work on the castle slowed down.

Generous fiefs and donations drove the Swedish Crown into financial difficulties, and the only way to save the situation was to use reductions, i.e. to return the fiefs to the Crown. Kajaani Castle returned to the possession of the Crown in 1681.

The Crown regarded the castle as old-fashioned and unnecessary, and even considered its closure. Eventually, the doors of the castle were not closed, but the number of troops was reduced to a minimum. In the event of a threat of war, Paltamo and Sotkamo peasants were obliged to send 150 men with the town guard as reinforcements.

In the beginning, daily life in the castle was peaceful. The Great Northern War broke out in 1700, but it did not affect Kajaani immediately. The situation in Kainuu was calm thanks to an agreement made for peace on the Eastern border with Karelians living on the other side of the border in 1703. The peace was broken on 13 March 1712 when the Karelians and Russians attacked the town of Kajaani. After burning and pillaging part of the town, the enemy withdrew.

The Russians occupied the whole of Southern Finland in 1714. Kajaani as a remote town that was difficult to access remained outside the war for a longer period. During this period, the castle was equipped for any future attacks. The top parts of both towers were pulled down and replaced with batteries. A thick layer of peat was piled up to protect the walls of the castle. A total of seven batteries were constructed: the batteries of the eastern tower were named Ulrika and Hessen Cassel and those of the western tower Carolus and Gloria, while Armfelt was responsible for defence at the gate facing the town and Clerck on the north-eastern gate. The seventh battery, Victoria, was situated on top of the Tauhasentorni Tower. Stones and chevaux de frise were placed upstream of the Linnaluoto islet as obstacles. The remaining parts of the town were burnt to prevent the enemy from using the buildings as shelter.

In 1715, a small unit of Russian troops moved in on the castle twice. The defenders of the castle held on, and the Russians had to withdraw. At that time, the castle was the only base the Swedes had in Finland.

In January 1716, a large unit of Russian troops approached the castle. According to legend, there were almost 4,000 Russian men. They began a systematic siege of the castle by constructing earthworks and batteries on both sides of the river. The castle and its troops consisting of approximately 50 men were under artillery fire day and night for over a month. When the siege became protracted, the food, firewood and ammunition supplies of the castle depleted. As the situation seemed desperate, the defenders agreed on surrender and opened the gates on 24 February 1716. The Russians had promised that the defenders could leave the castle freely, but did not, in the event, allow this; all the defenders were taken prisoner and sent to Russia. The Russians vacated the castle and blew it up as they left using the gunpowder left behind by the defenders.

After the Great Northern War, reconstruction of Kajaani Castle was started, but it was not given priority in the kingdom that was crushed by war. The work on the castle progressed slowly, and renovation measures were gradually stopped. In 1793, the fortress was abandoned. Kajaani Castle lost its strategic importance in 1809 when Finland became an autonomous part of Russia as the Grand Duchy of Finland. 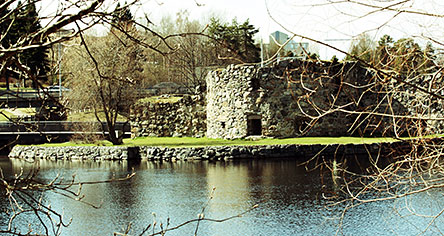 The castle ruins slept like Sleeping Beauty and gradually deteriorated. Due to the explosion in 1716, they were covered by a several-metre-thick layer of soil and stones, regardless of the fact that local people used to collect stone material for their buildings from there. In the late 1800s, people started to fear that the walls of the castle would collapse into the river.

The first repairs were carried out in 1890–1982. These included repairing fallen walls and making the ruins lower. The western tower was cleared of soil. Hundreds of metallic objects were salvaged. The repairs continued in 1910–1911.

Unearthing the castle ruins in 1937

The motorisation of society led to the excavation of Kajaani Castle. The wooden bridge passing over the ruins was too narrow for cars and in poor condition. In the context of the foundation work carried out for the new reinforced concrete bridge in 1936, pieces of marble plaques sent by Per Brahe to the castle were discovered. This raised great interest, and as a result, excavation and restoration work on the castle began in the summer of 1937.

The soil and stone layers, several metres in thickness, were removed. In this context, approximately 1,800 finds were collected, mainly metallic objects, such as keys, fittings and hinges. The walls of the castle were repaired and raised. Repairs made with tiles in 1890–1892 were replaced with grey granite stones. The layout of the castle was restored to correspond to the layout in the 17th century.

Regular damage surveys are still carried out on the castle ruins, and the results are used as a basis for repairs. 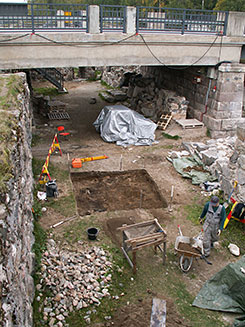 The Kajaani Castle ruins and the fast-flowing rapids on both sides inspired many cultural figures in the 19th century. The statues of Eino Leino and Elias Lönnrot in the park beside the castle remind us of this time.

Elias Lönnrot (1802–1884) worked as a district doctor in Kajaani. He toured the countryside, collected traditional Finnish oral poetry and compiled it into works such as the Finnish national epic, Kalevala. He had many famous guests. For example, the Russian professor Yakov Grot described the Kajaani area in his travel book, while another one of Lönnrot's guests, Zacharias Topelius, described Kajaani Castle in his works Fältskärns berättelser (1851–1857), Finland framstäldt i teckningar (1845–1852) and Boken om vårt land (1875).

The poet Eino Leino, born in Paltamo, Kajaani, as Armas Einar (Eino) Leopold Lönnbohm, started his career with a poem about Kajaani Castle "Kajaanin linna" (www.kainuuneinoleinoseura.fi, in Finnish), which he recited at the age of 12 in a patriotic event in 1890. In the same year, the poem was published in the newspaper Hämeen Sanomat.