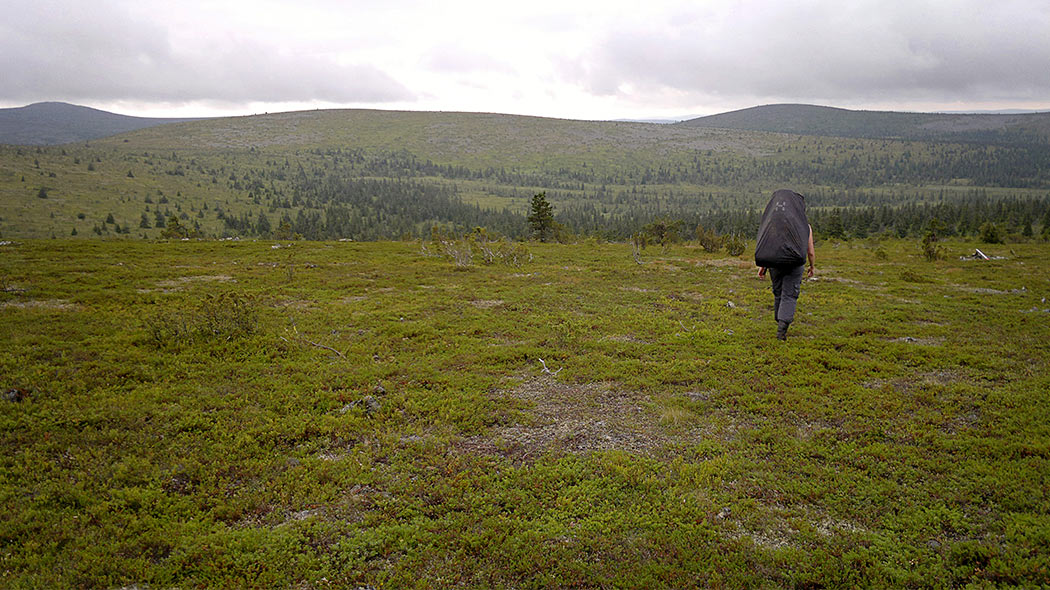 UKK Trail is a national hiking trail which leads across Finland. In the north it leads through the municipalities of Salla and Savukoski as well as crosses through Tuntsa Wilderness Area.

Here the trail has been detailed from Naruska to Tulppio (112 km), of which 21 km is within Tuntsa Wilderness Area. This section of the trail is wilderness-like which leads across rugged and grand landscape at times climbing to fell peaks and at others following the banks of the River Naruskajoki in low lands.

Those who plan on going for longer treks should at least have good orienteering skills and be in good shape as there are sharp climbs at points. The UKK Trail is a summer hiking trail. Though there are duckboards across the wettest parts of the trail hikers should have waterproof footwear with them. Hikers do not however need to cross any rivers by wading as there are bridges at each crossing point. There are no accessible services along the trail.

The trail is marked in the terrain for the most part with orange-red markings. The section which leads around Karhutunturi Fell is marked with blue markings.

At the village of Naruska the UKK Hiking Trail leads along the road to Tuntsa for some time. There is no actual starting point for the trail or a parking area for hikers to leave vehicles at, but cars can be left by the side of the road where it is suitably wide. At Siekaköngäs forest road turns to the left and crosses a bridge across the River Naruskajoki. The UKK Hiking Trail follows the route of the road along the west side of the river to the foot of Karhutunturi Fell. From the foot of the fell hikers can stray from the main trail to see the peak of Karhutunturi Fell and Karhutunturi campfire shelter, which is 2 km from the main trail.

The Lapps had a trade route, which lead between Siekavaara Fell and Karhutunturi Fell. It came from the direction of Saija and continued from here east over the River Naruskajoki and along the bank of the River Saukko-oja to Lake Saukkojärvi. From there the trade route lead to the mouth of the River Tenniöjoki and onward via the River Sankarijoki and the east side of Puitsitunturi Fell to Lake Hirvasjärvi in Russia. Lapps took flour and forest prey with them on their trade journeys, of which some led all the way to Kemi.

Karhutunturi campfire shelter is a wonderful place to stop and rest. A trail leads from the campfire shelter to the peak of Karhutunturi Fell. There is an old fire guard's hut at the top of the fell. An old telephone line rose to the hut and there are still signs of the cable left behind.

From the Pystökoski Rapids the trail continues northward along the river's embankment. The forest here is mostly pine and the UKK Hiking Trail travels for the most part along dry sand and gravel ridge backs. Fishers can try their luck and if it is good they can make fish soup at the next rest spot.

From Ministerikota campfire shelter it is only a 4 km hike to Naruskan tammi Dam. At the dam hikers can rest at the cooking shelter situated right by the river. The rapids at the dam are a good fishing spot. Naruskan tammi Dam is an old dam device which was used during log floating days to raise the surface of Lake Naruskajärvi.

From Naruskan tammi Dam the UKK Hiking Trail first travels south along the road to Tuntsa for 3 km. It then turns left off the road heading east and follows the River Sorsajoki all the way to the foot of Sorsatunturi Fell. The trail does not climb to the top of the fell, but it is possible to climb up by following the sign for the snow mobile track. The slope up Sorsatunturi Fell is rocky and difficult to climb, but the over 2 km long climb is well worth it as the view of the surrounding fell landscape is magnificent. The source of the River Tenniöjoki meanders down below behind the fell and acting as the divider between Finland and Russia. The actual national border can be seen further in the south on the right as a white stripe down a fell slope. The Tenniöjärvi Lake back shimmers in the southeast on the Russian side of the border.

Hikers can get down from the fell top along the snow mobile track which descends from the peak towards the northeast. The snow mobile track leads to Sorsa campfire shelter where hikers can get back onto the UKK Hiking Trail. The actual UKK Hiking Trail goes around Sorsatunturi Fell along its lower slope to Sorsa campfire shelter.

The ridgeback between the fells is covered by spruce forest. Over 2 km of the trail travels through this forest until it reaches an area burnt down by forest fires. The UKK Hiking Trail forks off onto two separate trail options on the west slope of the next fell, which is Kuskoiva. The trail options go west to Pirunkirkko and north to Tuntsa.

The two route options for the UKK Hiking Trail, described above, meet again on the north side of Juntterivaara Fell.

From Juntterivaara onward the landscape becomes spruce forest dominated hill and ridgeback terrain. This watershed zone is the source of both the River Värriöjoki and the River Tuntsajoki. West of Juntteri on the Saihoselkä ridgeback there are a few pines which have persevered among the spruce trees. In the driest forests the pines are grand and old.

After passing Juntterivaara the trail enters Tuntsa Wilderness Area. The forest before reaching Murhahaara is spruce dominated. Only a few snow battered pines stand defiantly in this pine and rock filled rugged landscape. Visitors can rest for a good while at Murhahaara open wilderness hut which is situated on the edge of Murhahaaranaapa bog, before setting off on the next section.

The UKK Hiking Trail continues from Murhahaara deeper into the untouched backwoods. The rocky highlands and fells dominate the landscape. The long ridge of Värriötunturi Fell slopes up and down on the right to the north. Värriö Strict Nature Reserve is also in this direction. Short spruce trees grow sparsely along the slopes, only growing taller when they are near the river's edge or in bogs. There are birch trees everywhere though they have suffered great damage caused by the Autumnal moth (Epirrita autumnata ).

There are also some exceptional wide open spaces, which have sparse spruce and birch trees dotting them. There are abundant amounts of juniper and all the growth spots which had been left open now sprouting spruce saplings. A feature characteristic of the Salla highlands are the types bare areas are usually only seen on fell peaks but are now on low lands. These patches even feature fell vegetation.

When descending from the rocky Värriötunturinmurusta Värriönlatva aapabog, with its duckboards, opens before your eyes. The trail leads through dense spruce forest with damp depressions to end at Härkätunturi open and reservable wilderness hut. The grand hut has room for even large groups and you can wash away the grime and dust from your hike in the sauna there.

From Härkätunturi Fell the UKK Hiking Trail continues to Tulppio in Savukoski. Hikers can rest at Saijanojanlatva campfire site which is by the trail.