The large-eyed Saimaa Ringed Seal is one of the world's most endangered and rare seals. This ice-loving seal can only be spotted in Lake Saimaa, where it became isolated from other seals at the end of the Ice Age. 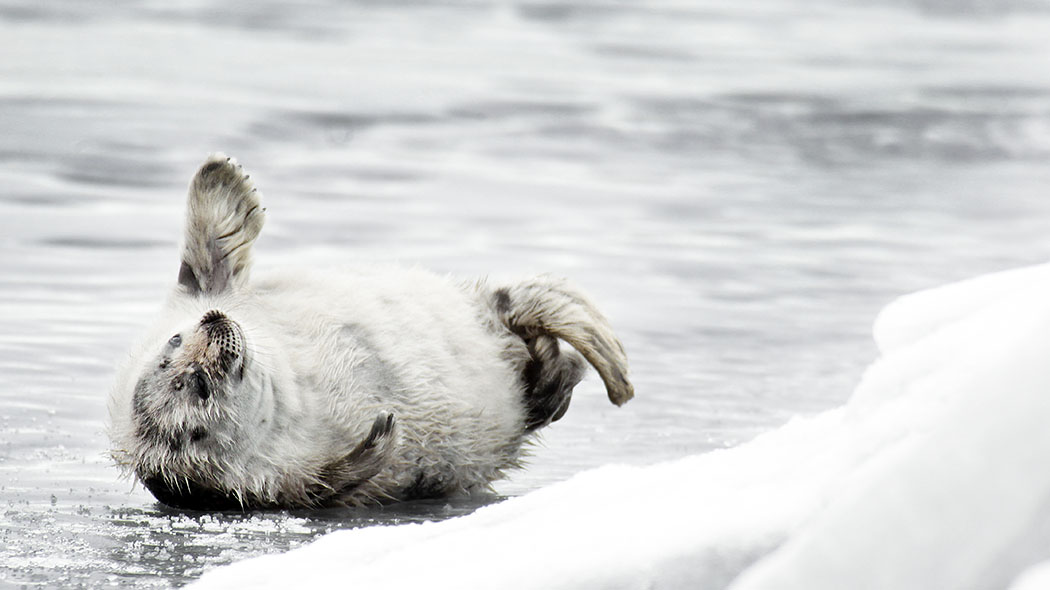 The seal pups are playful and curious. Photo: Timo Seppäläinen. 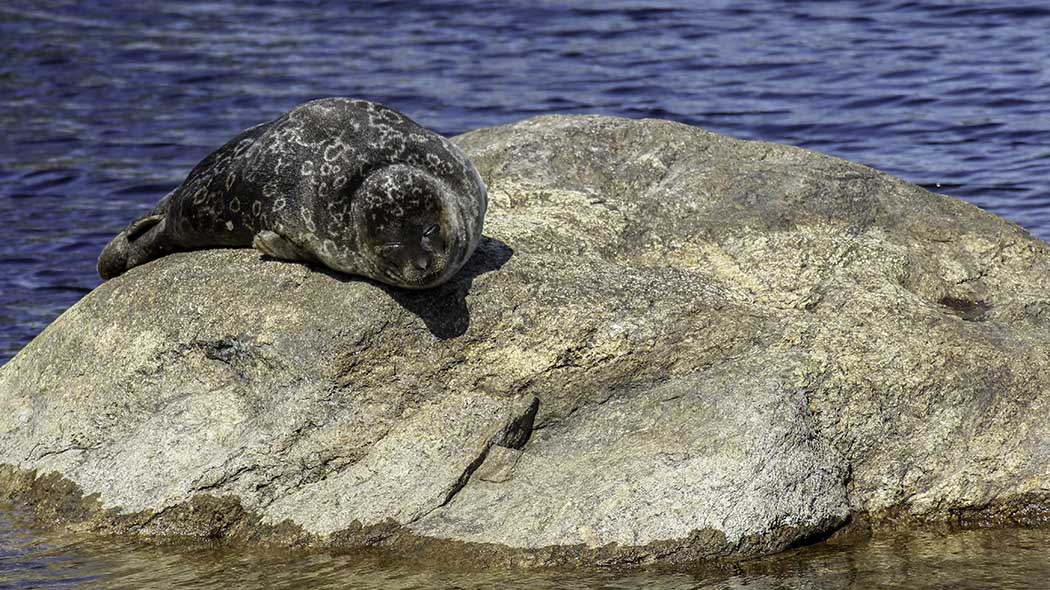 An intermediate goal for protecting the Saimaa Ringed Seal is that by 2025, there would be at least 400 seals. Photo: Timo Seppäläinen. 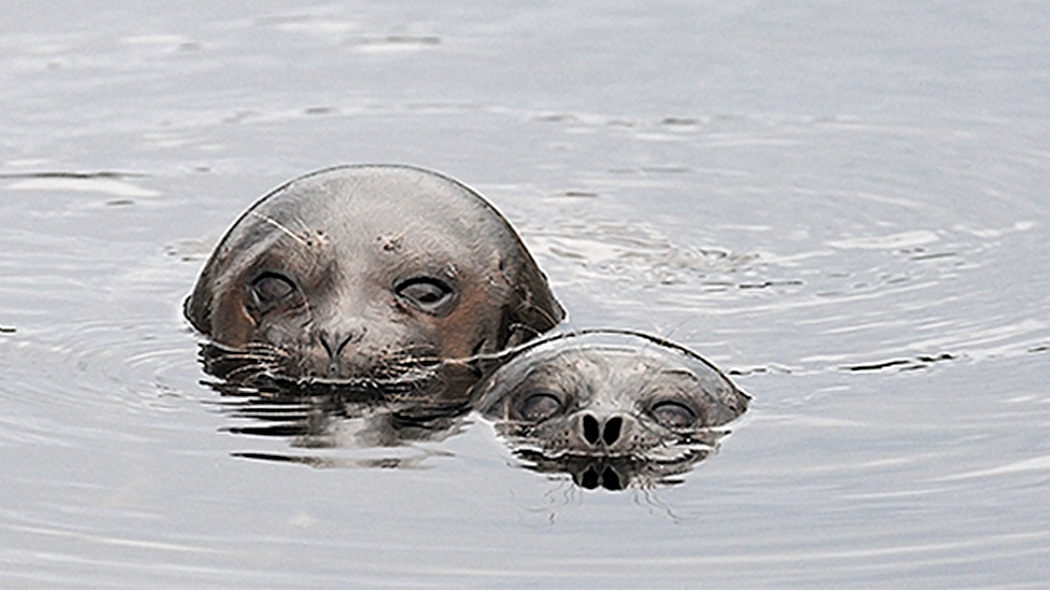 The pup, a young Saimaa Ringed Seal, remains by its mother for about three months. Photo: Mervi Kunnasranta. 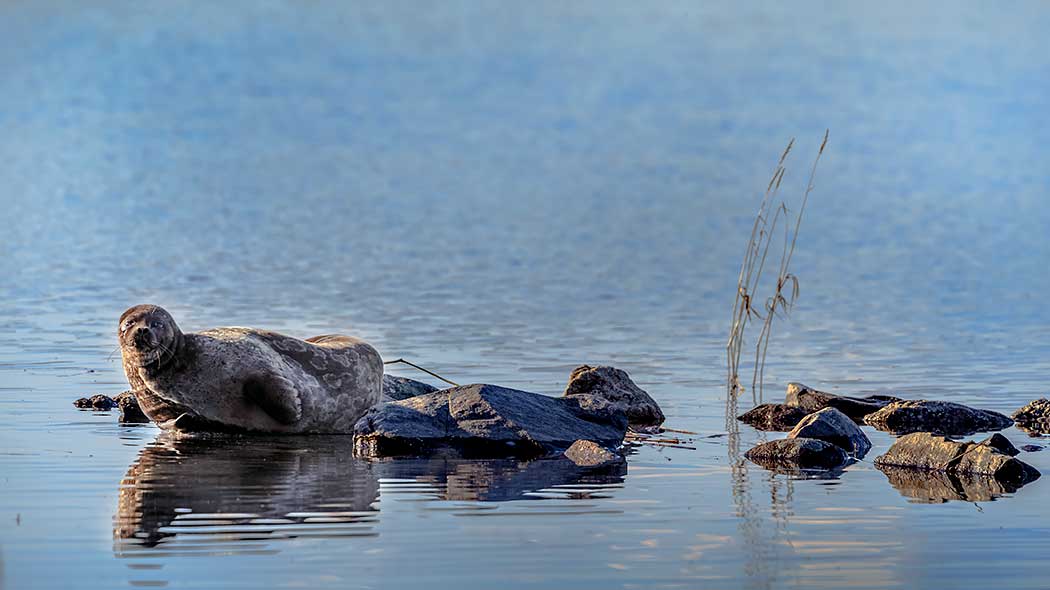 The Saimaa Ringed Seal needs a peaceful environment. If you come across a seal, respect its privacy. Photo: Timo Seppäläinen. 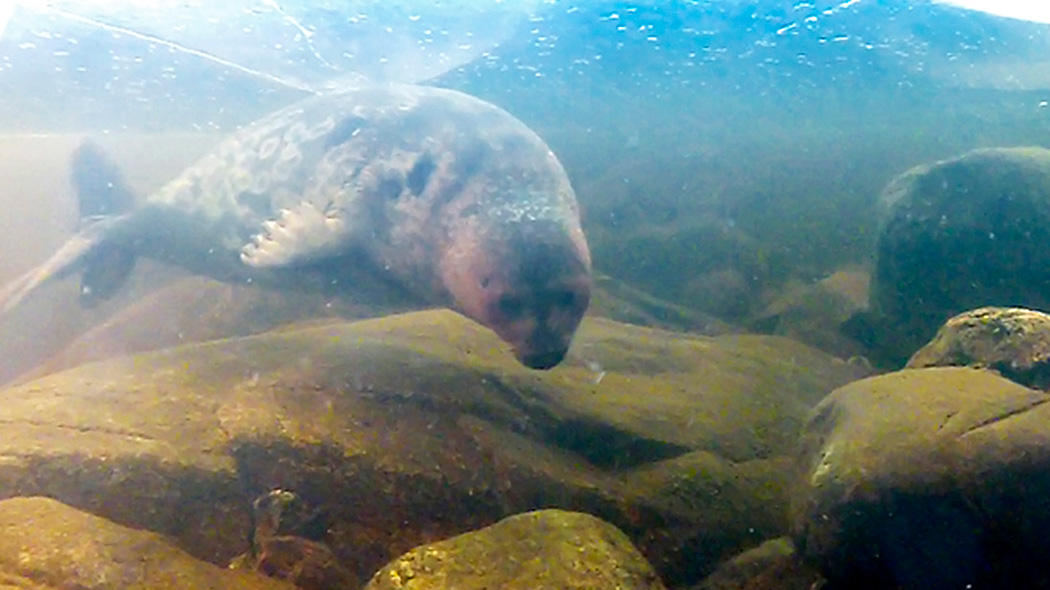 A seal is adapted to a life in the water and spends most of its life submerged. Photo: Ismo Marttinen 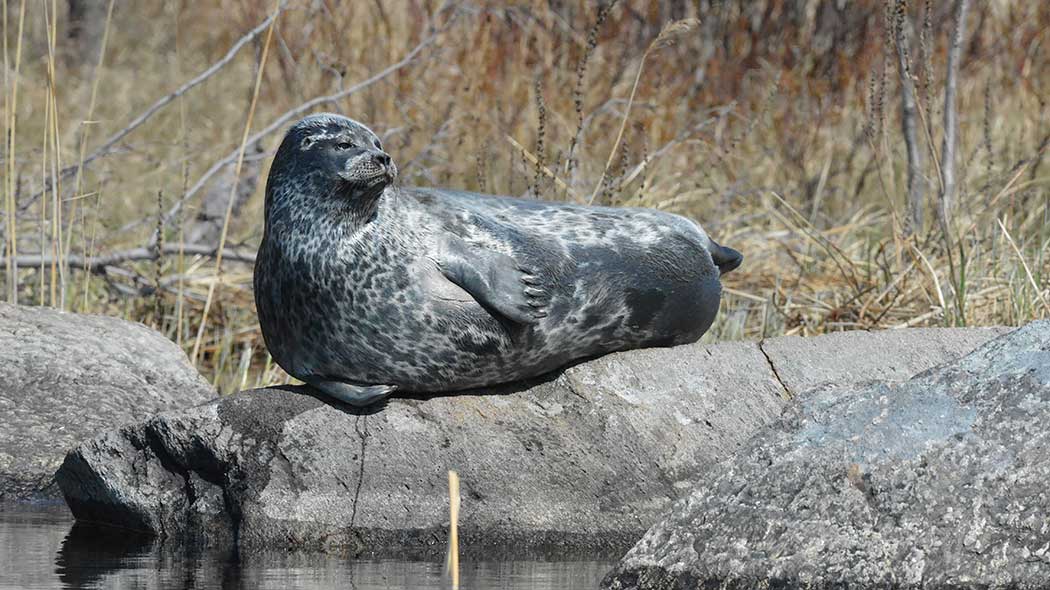 The Saimaa Ringed Seal is an intelligent and expressive animal. Photo: Harri Ekholm 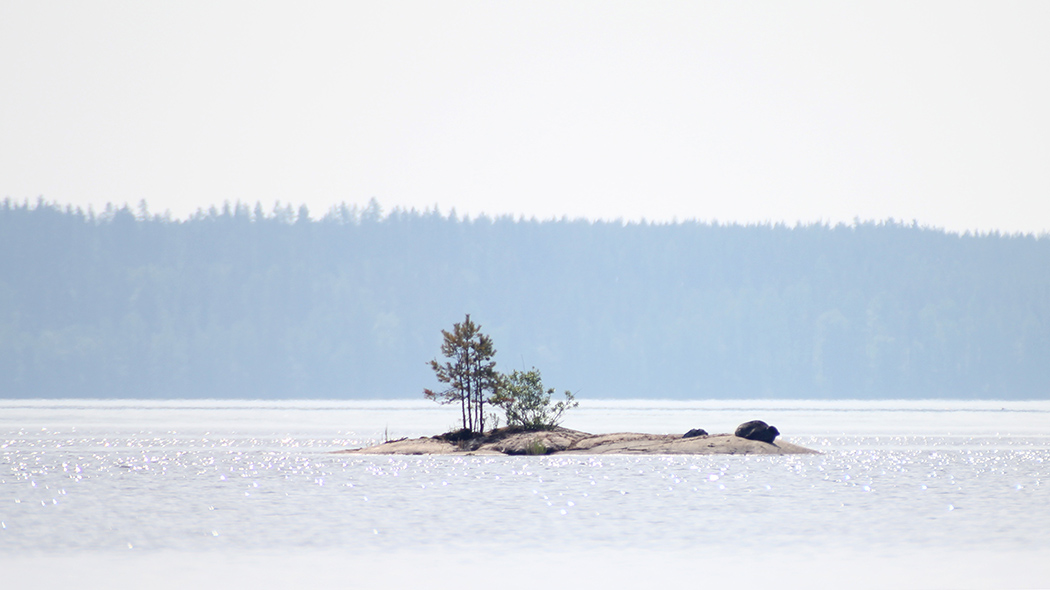 The seal is an inseparable part of Lake Saimaa and its scenery. Photo: Ismo Marttinen
The seal lives in the murky, labyrinthine waters of Lake Saimaa, where its only enemy is humans. Due to human activity, the seal population has decreased heavily during the 20th century. Only because of the persistent conservation measures, over 400 seals currently live in Lake Saimaa, but the species is still threatened by extinction. Today, the greatest threats to the seal population are by-catch mortality by fishing, climate change, a small and fragmented population, and disturbances during the breeding season.

Here you can read more about this persistent inhabitant of the Finnish lakeland. You will also learn how Metsähallitus participates in the conservation of the Saimaa Ringed Seal, and what you can do to help.

The Saimaa Ringed Seal spends most of its life submerged. It can even sleep  under water. In May, during the moulting season, seals enjoy lolling on lakeshore rocks and islets drying their fur. The seals usually have their favourite spots, where they can be spotted every spring. If you find a seal lying on a rock, do not approach the animal and scare it. With some luck, you may be able to observe its life for years.

After the moulting season, seals return to the water. In the July warmth, only an occasional seal head popping to the surface is evidence of the existence of this mythical being. 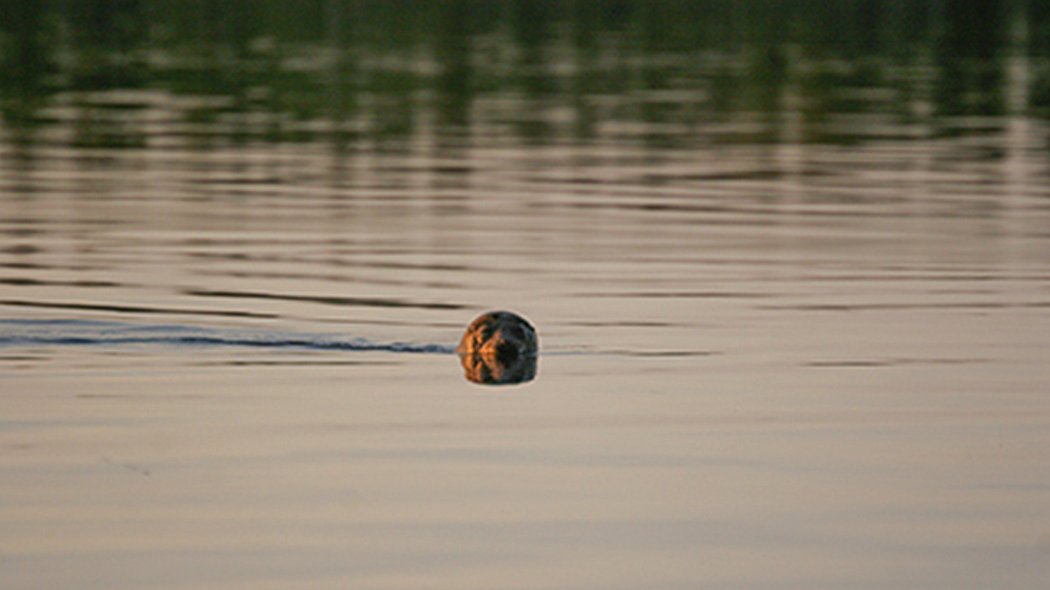 Seals do not Suffer from Decompression sickness

The Saimaa Ringed Seal is a skilled diver and adapted to life in the water. It navigates through the maze of islands and islets in Lake Saimaa with the help of its sight and whiskers, which it uses as sense organs. The seal's hypodermic fat layer functions as excellent insulating material in the water, and the large hind flippers enable quick moves when foraging.

The seal was the first professional fisher in Lake Saimaa. An adult seal eats about 1,000 kilos of fish a year. Its body mass, particularly the amount of fat, varies heavily, depending on the season. The seal is at its fattest in early winter before the lake freezes and at its thinnest in early summer, after the breeding and moulting seasons. When moulting, seals fast for most of the time.

The Saimaa Ringed Seal population is growing slowly. The seals only reach sexual maturity at the age of 4 to 6 years and usually give birth to one pup a year. Due to high mortality in the younger age group, particularly, the life span of a seal is often under ten years. With good luck, a seal may live to be over thirty. 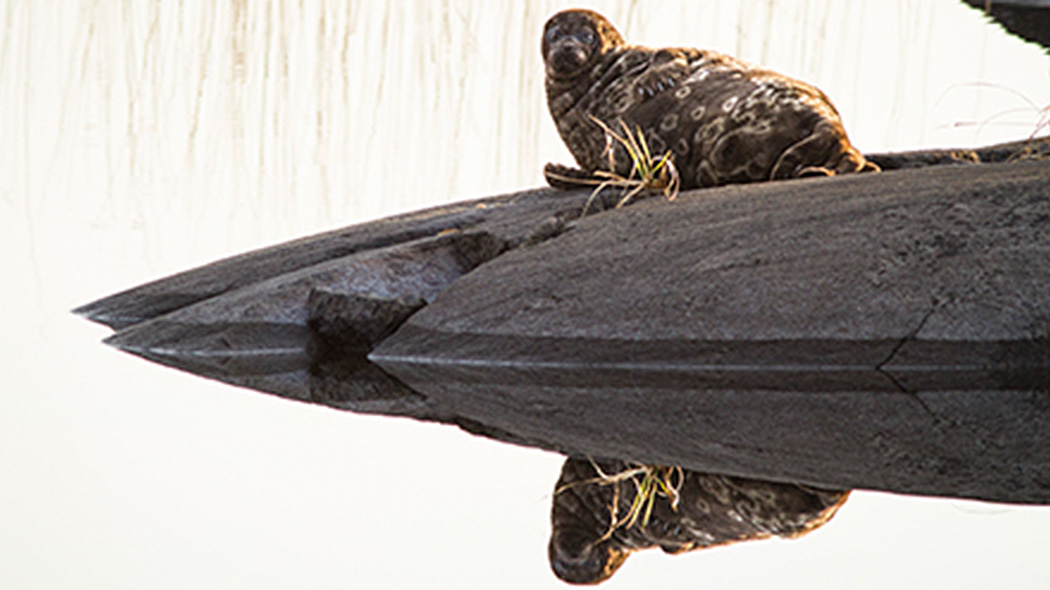 Due to hunting, environmental toxins, changes in the water level during the breeding season, and by-catch mortality, the seal population collapsed towards the end of the 20th century. Some of the threats have been defeated, and the Saimaa Ringed Seal population has been growing slowly in this century. However, there is still plenty to do to secure the future of the seal.

Metsähallitus and the Saimaa Ringed Seal

Metsähallitus is committed to protecting the seal on the areas owned by the government. Metsähallitus Parks & Wildlife Finland is responsible for the conservation and population monitoring. Various authorities, nature conservation organisations, researchers and more than a hundred volunteers participate in the conservation effort. The more intense conservation measures have produced good results. In 2022, 92 pups were born, a new record. 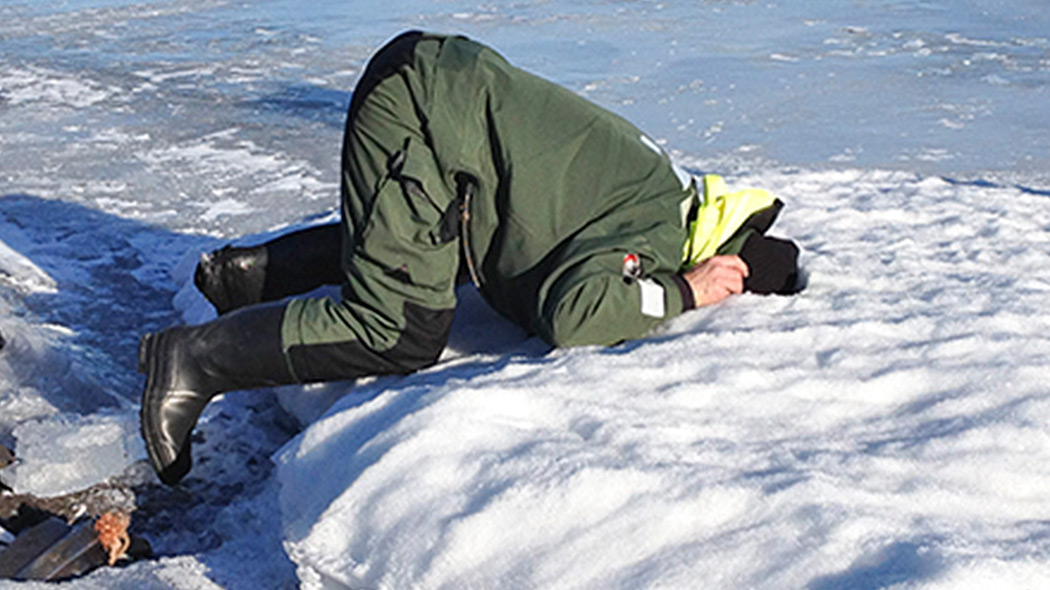 Restrictions on landing on shores, and other restrictions on access, have been imposed in national parks and other protected areas. The requirements of the seal are taken into account in land-use planning, and the use of fishing gear dangerous to the seals has been restricted.

The monitoring of the population helps to assess the effectiveness of the conservation measures taken and to respond to potential threats quickly. The conditions at the breeding habitat, birth rate and the causes of death are monitored annually.

The Saimaa Ringed Seal will continue to grace us with its presence, if we all participate in the conservation effort! The future generations will then also be able to spot a seal basking on a rock or diving in the open waters. 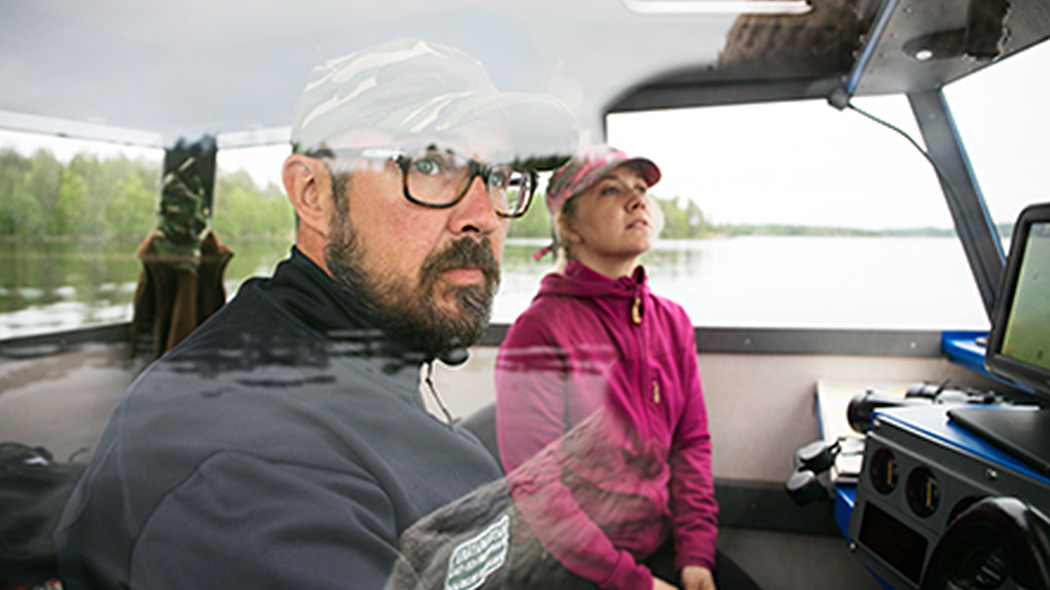 The Saimaa Ringed Seal and I

We can all participate in the conservation of the Saimaa Ringed Seal. By-catch mortality is still the most serious immediate threat to the seal population. Pups, in particular, easily become entangled in gill nets and may get caught in a fish trap, if the opening is too wide. See below for instructions on seal-friendly fishing.

The climate change is another serious threat to the Saimaa Ringed Seal. Poor snow and ice conditions hinder the breeding success of the seal. By staying away from the ice of Lake Saimaa, especially the shoreline of islands and islets, and by keeping dogs on a leash when the lake is covered by ice, you can help the Saimaa Ringed Seal breed – particularly during mild winters with poor snow conditions, when the pups are not protected by a snow lair. By cutting your consumption and by making environment-friendly choices, you can also improve the living conditions of the Saimaa Ringed Seal. 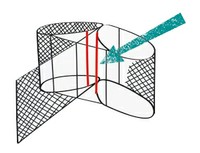 Only use a fish trap in which the maximum width of the opening is 15 cm.

In the breeding areas of the Saimaa Ringed Seal, only fish traps in which the maximum width of the opening is 15 cm, even when stretched, may be used. The stretching of the trap opening may be prevented with special stoppers or with cable ties, for example. Under the Fishing Act, fish traps must be clearly marked and equipped with the owner's contact information. Also remember to get a fishing permit. 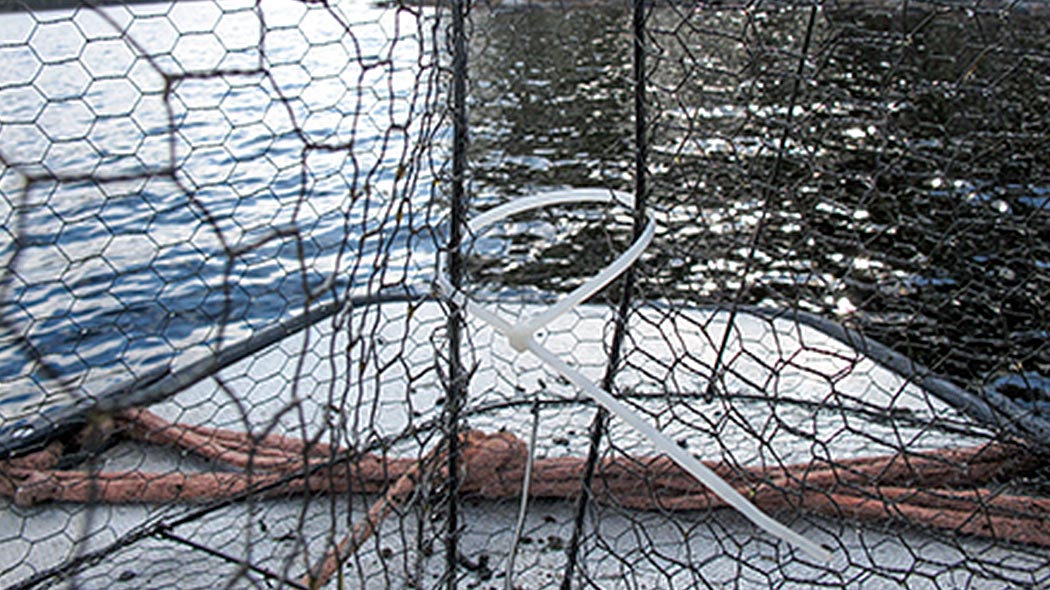 Do not use gill nets between 15 April and 30 June. Check the areas with fishing restrictions  (kalastusrajoitus.fi, in Finnish). Gill nets are also a hazard to the Saimaa Ringed Seal outside the restriction periods, as well.

Avoid islets and snowdrifts on shores. If you move on the ice of Lake Saimaa in winter, avoid islets on open stretches of water and spits of land, as they may hide a seal lair. Also, keep your dog on a leash.

It is essential for the conservation of the Saimaa Ringed Seal that all dead seals are examined. The age and sex of the dead seal, often also the cause of death, can be determined from the carcass. This is important information for the population monitoring.

Thank you for your help! 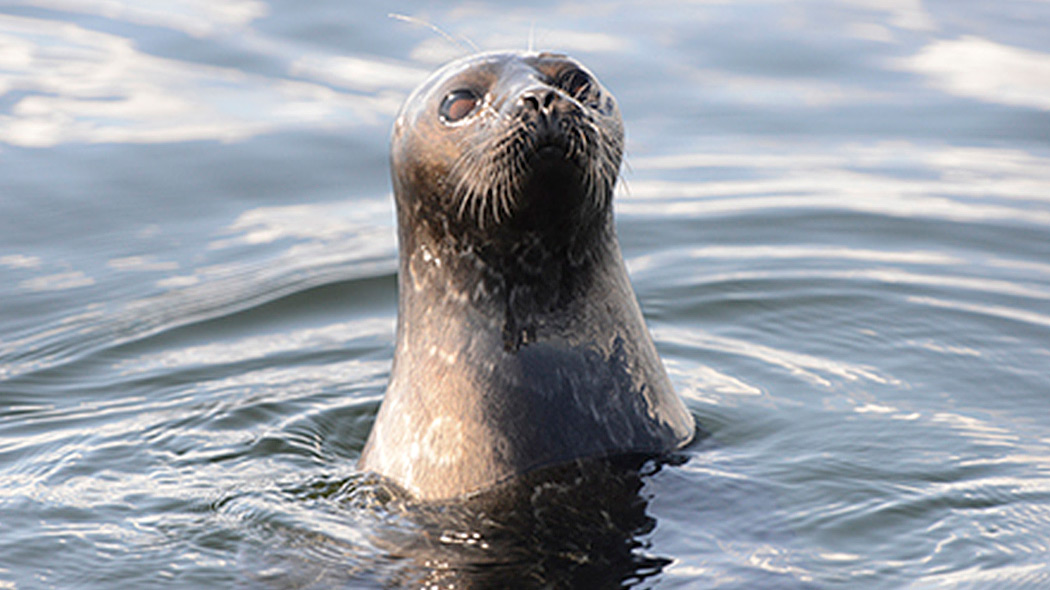 More information on the Saimaa Ringed Seal and the LIFE project

The Year of the Saimaa ringed seal 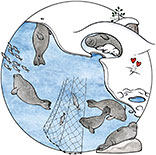 Read more about the year of the saimaa ringed seal (julkaisut.metsa.fi, pdf-file 1,5 MB) 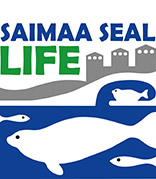 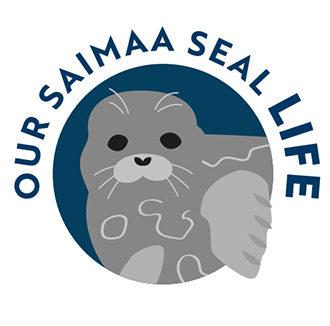 More information about the project: Our Saimaa Seal LIFE (metsa.fi).

This project was co-funded by the European Union’s LIFE programme. The contents reflect the views of its authors, and neither the European Commission nor CINEA is responsible for any use made of the information contained in the material.

Kolovesi National Park in the winter

Kolovesi National Park is closed for the winter. There is no winter maintenance on the snowy roads or routes in the National Park area.

Report Seal Carcasses or seals in need of help

It is essential for the conservation of the Saimaa ringed seal that all dead seals are examined. Please, report +358 206 39 5000. More information. 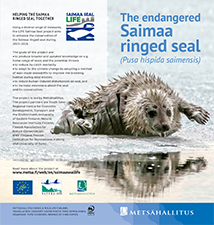 When fishing with a trap, the trap funnel may not be more than 15 cm wide

When fishing in Saimaa ringed seal habitats, only use traps with a funnel less than 15 cm wide. In order to prevent the funnel from stretching, use funnel braces or, for example, cable ties. Under the Fishing Act, fish traps must be clearly marked and fitted with contact information. Remember to obtain the necessary fishing licences.