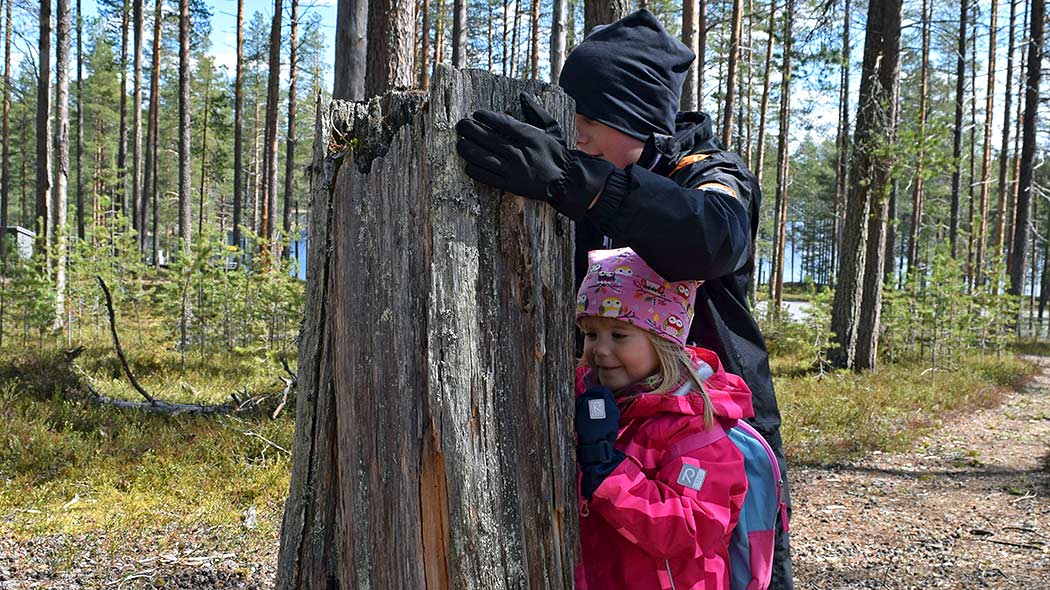 The Kylmäluoma Hiking Area is bisected by esker ridges and covered by pine-dominated forests and aapa mires. The wilderness atmosphere is further enhanced by the call of Red and Black-throated divers, the peaceful location and the utter silence. Kylmäluoma is paradise for hikers and anglers. 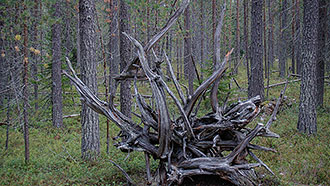 Pristine forests are the only suitable habitat for many species that need rotting wood to survive. Forestry has not been practised in area for at least 50 years. Read more > 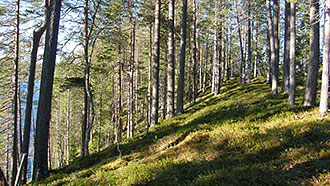 Walk along the narrow, steep-sloped esker ridges. Hukanharju, Sarvenharju and Kylmäluomanharju are part of a chain of ridges that run from Bothnian Bay to Russia. Read more > 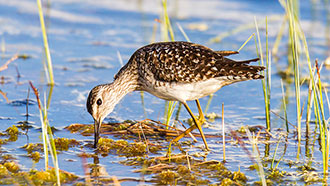 Stop by the flats of the aapa mire

A unique characteristic of the aapa mire is that its edges are higher than its centre. As a result, nutrients are carried into the mire by water flowing over the edges.
Read more > 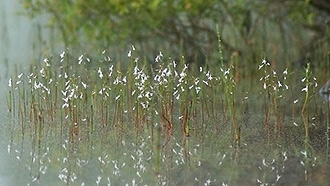 After the Ice Age, massive blocks of ice were buried in the ridges. As these blocks melted, they left holes in the ground, many of which filled up with water.
Read more > 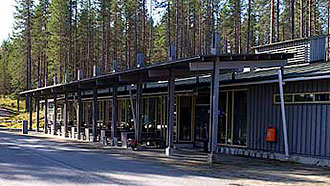 Finnish Wood Building of the Year 1994 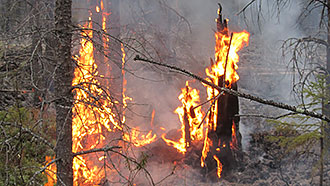 In the summer of 2017, a restoration burn was done in Kylmäluoma as part of the national, EU-funded Light & Fire LIFE project (metsa.fi). Read more > 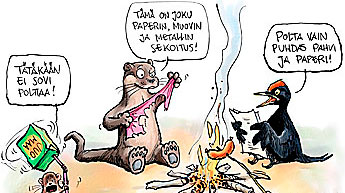 Carry your litter away when you leave. A recycling collection point can be found at the trailhead in the Kylmäluoma camping ground. Read more >

Old forest of the north

The last extensive felling in the Kylmäluoma Hiking Area took place in the 1930’s. Since then, most of the area’s forests have been excluded from intensive commercial forestry activities. The forests are returning to their natural state, and the number of old trees and the amount of decaying wood has increased. Characteristics of a natural forest include sturdy fallen trees lying here and there in various states of the decaying process as well as still standing, silver-sided snags. More than a third (2,686 hectares) of Kylmäluoma’s surface area is covered by old natural forests. The area’s natural forests were the most essential reason for including Kylmäluoma in the EU’s Natura 2000 preservation network. 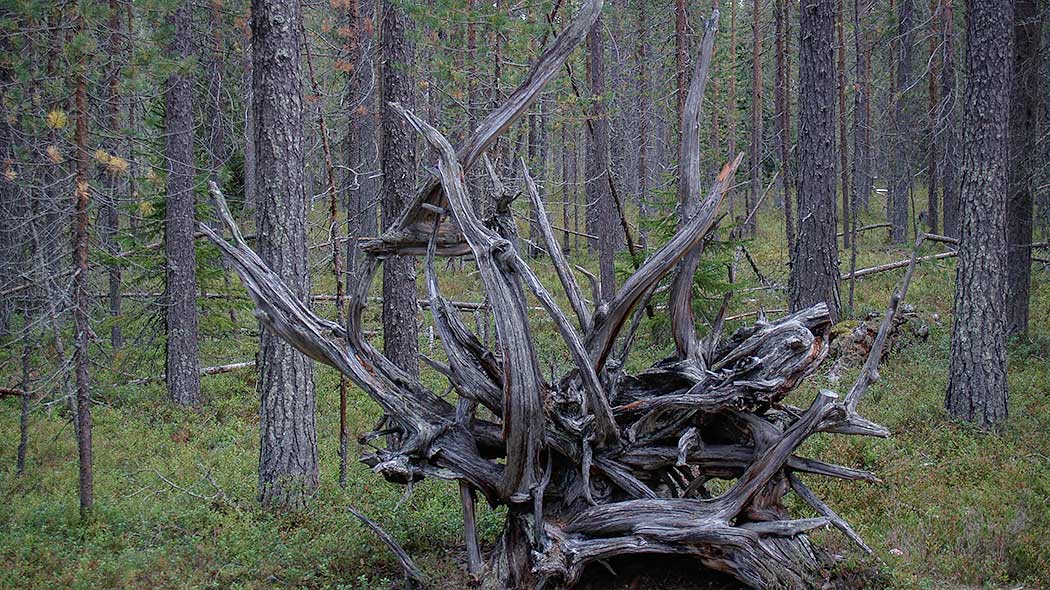 The preservation of old forests is important as they are the only suitable habitats for various species that depend on decaying wood. For example, numerous species of polypores thrive on the decaying tree trunks in the hiking area. The most uncommon polypore met in the area is Skeletocutis jelicii which has been classified as highly endangered in Finland. It lives only on sturdy pine and spruce trunks that are in the later stages of the decaying process. Highly endangered species include species that are exposed to a high risk of disappearing from nature. Other rare species of polypore in the Kylmäluoma area include Antrodia crassa, Anthoporia albobrunnea, Antrodia infirma and Sidera lenis. The populations of each of the aforementioned species have declined during the past few decades as the number of sturdy decaying wood has decreased.

In July–August, hikers can spot humble white orchid flowers rising from the thick moss layers of spruce forests or mires. Creeping lady’s-tresses (Goodyera repens) is one of the most common orchids of old coniferous forests, whereas it cannot be found in young commercial forests. The species requires the thick glittering woodmoss or feather moss layers that are only found in old forests.

The significance of the Kylmäluoma Hiking Area is highlighted by the preservation of species dependent on old forests. 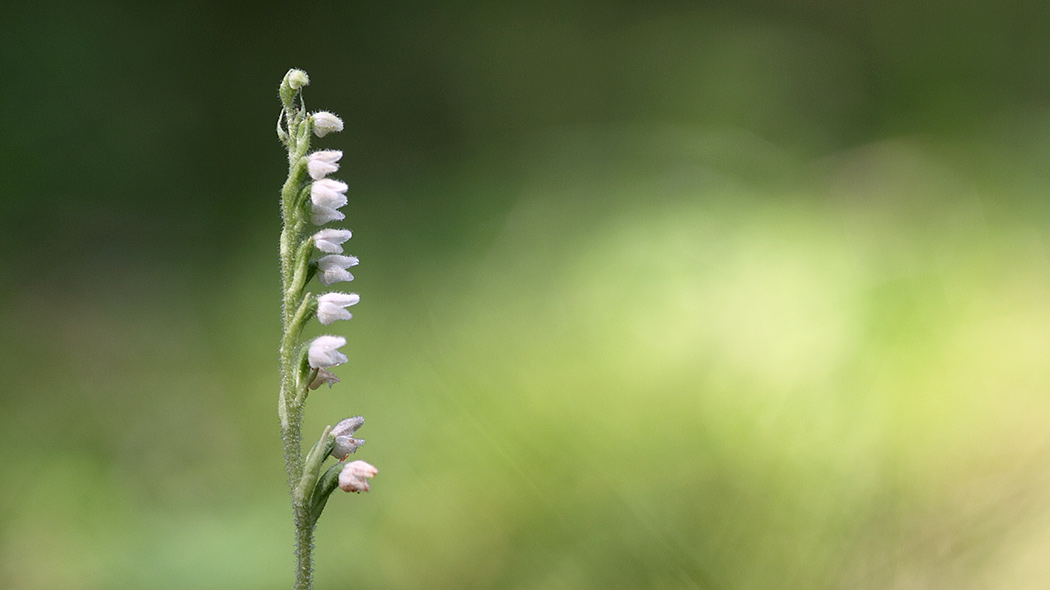 Kylmäluoma’s long, steep ridges lead visitors to an unforgettably scenic hike. The hiking area’s ridges are part of a long ridgeline that stretches all the way from the Bay of Bothnia to Russia. The most impressing ridges of the area are Hukanharju, Sarvenharju and Kylmäluomanharju. Hikers can admire the area’s beautiful nature on, for example, the hiking routes that follow the tops of ridges Hukanharju and Kylmäluomanharju.

In comparison to the ridges in Southern Finland, Northern Finland’s ridges have fewer species and the vegetation is more similar to that of normal forests. The northern ridges lack nearly all the species that are typical in the south, such as lily of the valley (Convallaria majalis) and spring pasqueflower (Pulsatilla vernalis). 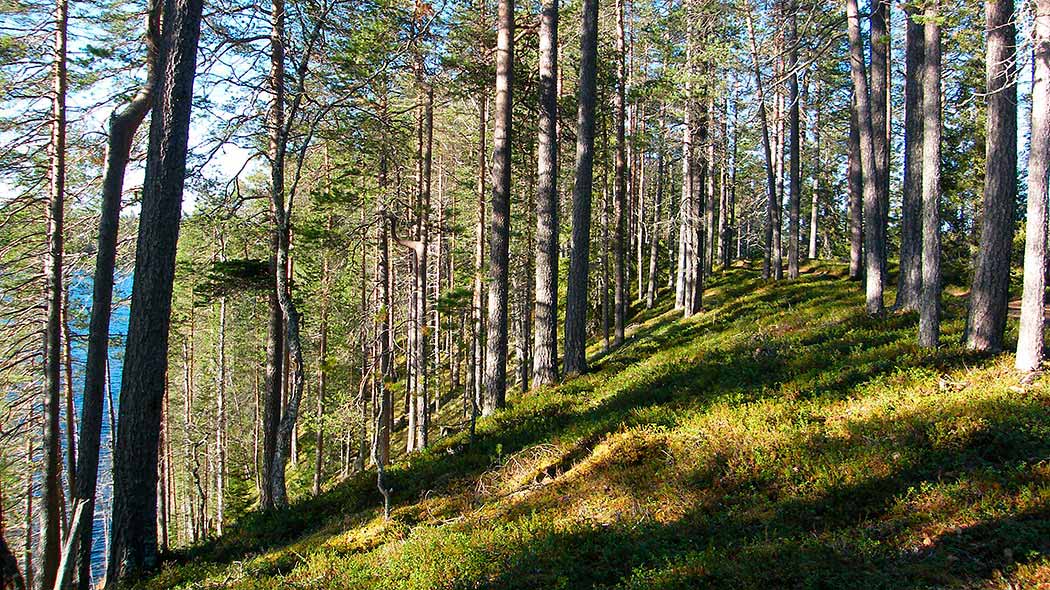 Stop by an aapa mire

A unique characteristic of the aapa mire is that its edges are higher than its centre. As a result, nutrients are carried into the mire by water flowing over the edges. Usually the centres of aapa mires are open and watery whereas the edges are covered by trees. Nearly 1,600 hectares of Kylmäluoma’s surface area is covered by aapa mires, and most of the mires have remained in their natural state.

In May–June, one of the most common sounds heard in the aapa mires is the bright song of wood sandpiper. Turn your eyes skyward, and you can see this grey wader singing its distinctive song. In addition to its song, flying wood sandpipers can be distinguished based on their greyish-white colour. They can often be seen sitting on top of pines on the edges of pine mires. In that case, they can be distinguished based on the white spots on their dark grey back and the dark stripe that stretches from the corner of the bird’s eye to its beak. Wood sandpipers are migratory birds that arrive in Finland in May and leave back to Africa for the winter at the latest in September. 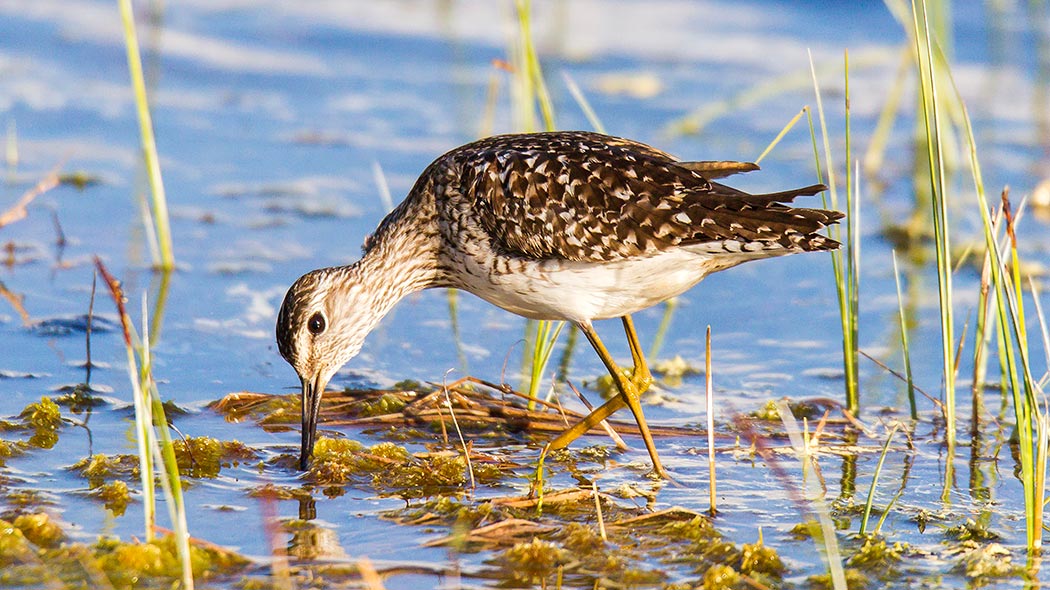 Did you know that nearly 1,000 hectares of Kylmäluoma Hiking Area’s surface area consists of lakes and ponds? Most of them have retained their natural state as the human touch (such as drainage) in the area has been scarce. Water bodies in the vicinity of ridges are particularly rich as they are affected remarkably by the presence of groundwater. On the other hand, the waters of lakes and ponds in mires have been coloured brown by humus.

The Kylmäluomaharju Ridge forms one of the edges of Lake Kylmäluoma which is the largest lake in the hiking area. It is also one of the largest rugged, clear-watered lakes in the region, and 325 hectares of its total surface area of 384 hectares are part of the hiking area. The deepest point of the lake falls 24 meters below the surface, and it is called Kirkkolaonhauta (Eng. Grave of the Church Barn). Lake Kylmäluoma is a typical rugged, clear-watered lake whose plant species include, for example, water lobelia (Lobelia dortmanna) and quillwort (Isoëtes lacustris), and where bird species, such as black-throated diver (Gavia arctica), red-breasted merganser (Mergus serrator) and common tern (Sterna hirundo), are often met. An observant hiker may also spot a red-throated diver (Gavia stellata) or an osprey (Pandion haliaetus) searching for prey above the lake. Fishers have the opportunity to catch valuable fish, such as vendace (Coregonus albula) or whitefish (Coregonus lavaretus). 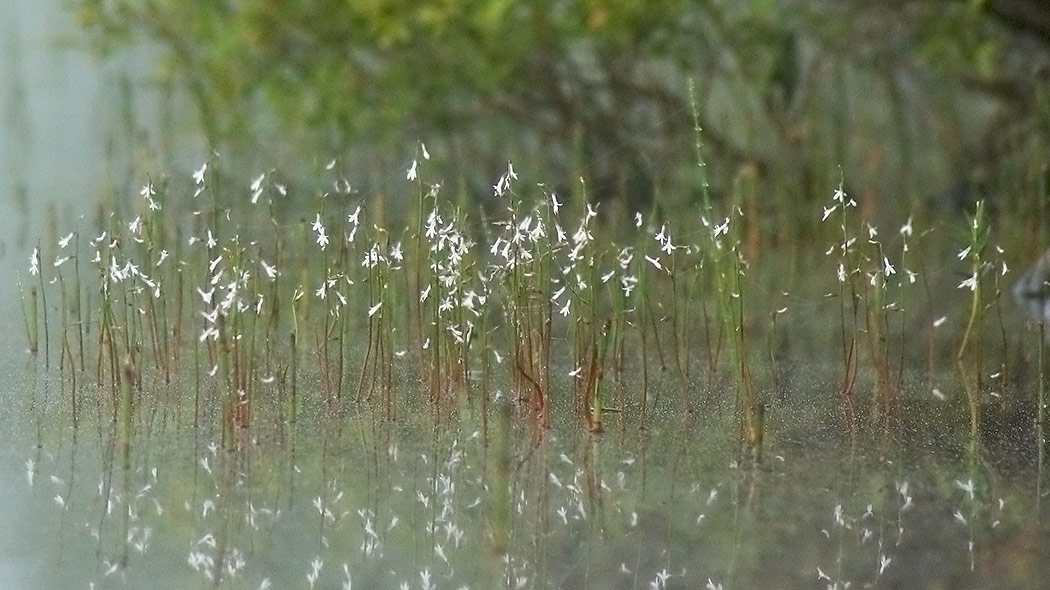 In the late summer, the white flowers of a plant that stretches approximately half a metre above the water level can be seen on the shore waters of Lake Kylmäluoma. The plant is called water lobelia. It grows in the lake bed, but it can raise its flowers above the surface from a depth of more than a metre. Water lobelia thrives in the clean, clear-watered lakes of ridge- and sand-dominated areas. The species has suffered from eutrophication and acidification of water bodies, but in Lake Kylmäluoma, it has remained relatively vigorous.

Finnish Wood Building of the Year 1996

The main building at the Kylmäluoma Outdoor Centre opened in 1994. The building houses the outdoor centres reception desk, information point and café/restaurant. When it was opened, the building was awarded with Puupalkinto, the wood building of the year -title.