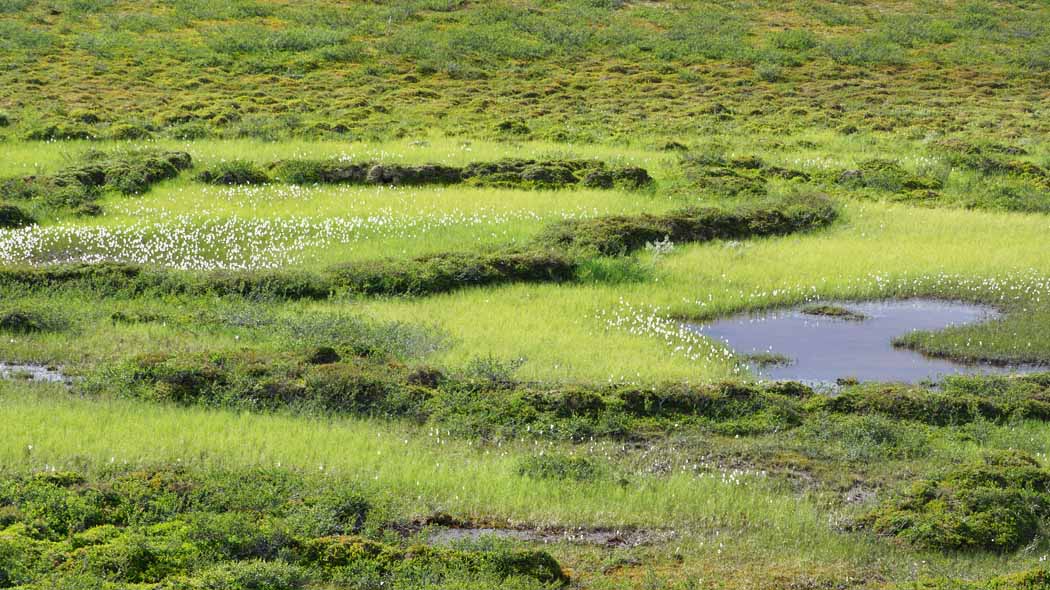 This area, which is well suited for wilderness trekking, mostly consists of highland in about the altitude of 200 - 300 metres. It is treeless or grows thin fell birch forest. Especially for fishermen this wilderness area is a dream destination: there lives abundance of fish in the many rivers, brooks and lakes of the large area. Rivers Vetsijoki and Pulmankijoki are the two remarkable tributary rivers of the River Tenojoki, which dominate the middle and the northern parts of the wilderness, flowing in their deep carved valleys on the lower course. The River Näätämöjoki, flowing in the southern part of the area, is popular with fishermen: Where it begins at the Lake Iijärvi, it is quite small but has many rapids. After the tributaries join it, it becomes more than 100 metres wide, calmly flowing stream. The waters of the wilderness area flow into the freezing cold Arctic Sea. 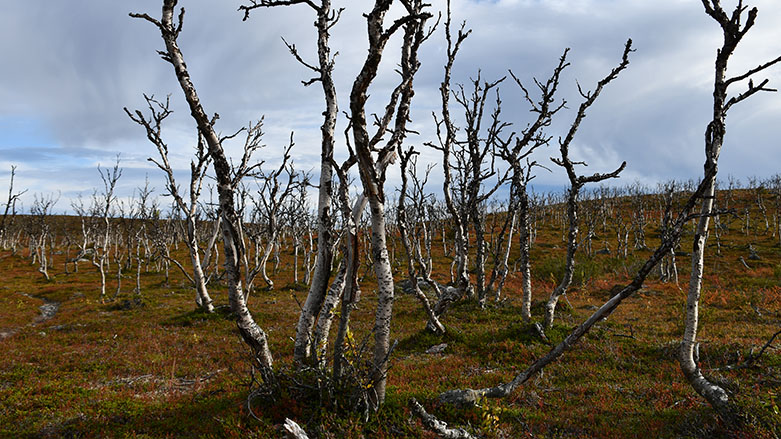 The mires and the numerous lakes, which are found especially in the southern part of the area, have a rich set of bird species. Waters and mires often seem to be organised in lines from southwest to northeast, in parallel with ridges and esker formations. In the southern part of the area, it is not easy to orientate oneself: the fell birch forest is confusingly dense and the sandy hills between the mires are low. The gentle fellslopes, highland heaths and esker formations make the terrain quite easy for a hiker.

There are two actual fell areas in Kaldoaivi Wilderness Area: Guorboaivi-Gálddoaivi Fells in the middle of the area, and the fells south of the River Tenojoki, which reach for the sky in the northwestern part of the wilderness area. The shape of the landscape in the treeless fell areas is very gentle and quite low. Only a few fells rise over 400 metres. At many places on the fell slopes you can see skeletons of fell birches without their leaf crowns, which reminds us of the mass occurrence of the caterpillar of the Autumnal Moth (Epirrita autumnata) in the mid 1960s. Tšuomasvarri Fell (Čuomasvárri) (435 m), is seen in the northeastern part of the area, near the Norwegian border. It is geologically different from the rest of the rock foundation in the area: it consists of ultrabasic rock.

The Soil and the Bedrock

After the latest Ice Age, the Arctic Sea stretched to the valleys of the Rivers Näätämöjoki and Pulmankijoki. The Lake Pulmankijärvi also is an ancient fjord of the Arctic Sea. Kaldoaivi Wilderness Area, located on the head of the "Maiden of Finland" in the map, is geologically diverse. There are plenty of different formations created after the Ice Age, such as drumlins, border moraines and eskers. The bedrock is more alkaline in the wilderness area than elsewhere in the Inari Lapland. Especially this can be seen in the lush herb-rich forests in the valleys of the brooks in the area.

The wailing song of the Eurasian Golden Plover (Pluvialis apricaria) adds to the atmosphere of the wilderness. It is probably the most observable bird in the area. You might also get to see the noble rarities of the fells: the Gyrfalcon (Falco rusticolus) and the Snowy Owl (Nyctea scandiaca). Rare waterbirds and waders nest on the hidden lakes, which have swampy shores. A significant part of the Finnish population of the Bar-tailed Godwit (Limosa lapponica) and the Long-tailed Duck (Clangula hyemalis) nests in the area. In the snowy wilderness live only a few bird species. Most likely you will see the Common Raven (Corvus corax) and the Willow Grouse (Lagopus lagopus). 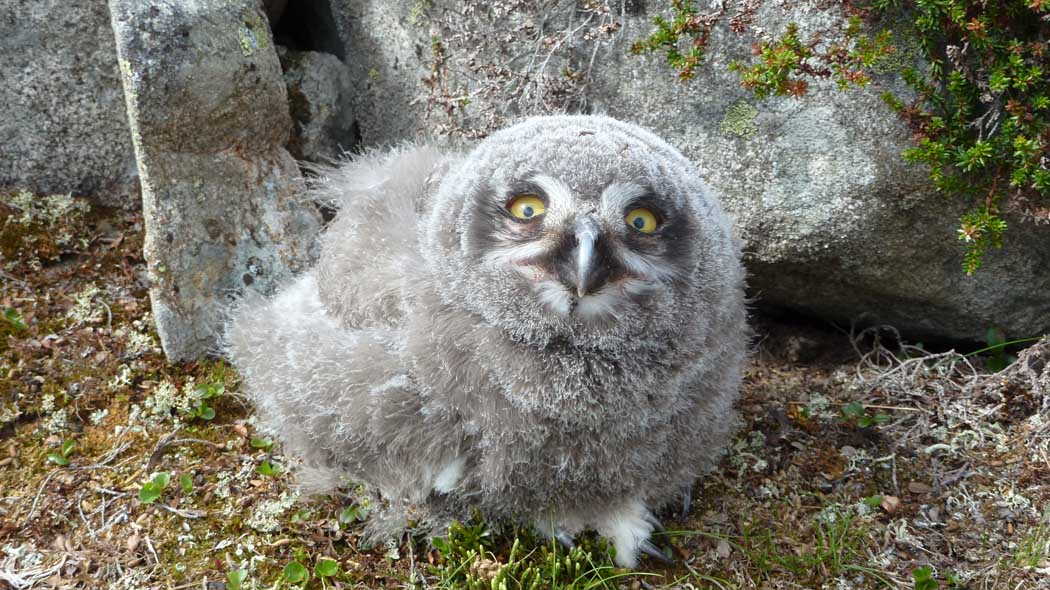 Of the mammals, the Stoat (Mustela erminea), the Least Weasel (Mustela nivalis) and the Red Fox (Vulpes vulpes) are numerous in the wilderness. The Otter (Lutra lutra) is also seen regularly. Kaldoaivi used to be an important distribution area of the Arctic Fox (Alopex lagopus). The last time this critically endangered species nested in Finland was in the mid 1990s. A new 5-year EU programme for protecting the Arctic Fox began in 2003, and its aims include restoring the Arctic Fox population of Kaldoaivi, which has almost disappeared. Therefore it is extremely important that the project group is informed about all sightings of the Arctic Fox. Information about sightings of the Gyrfalcon (Falco rusticolus), the Freshwater Pearl Mussel (Margaritifera margaritifera), the Golden Eagle (Aquila chrysaetos), the Peregrine Falcon (Falco peregrinus) and the Lesser White-fronted Goose (Anser erythropus) is also important andwelcome. The Natural Heritage Services of Metsähallitus is working to conservethese species. 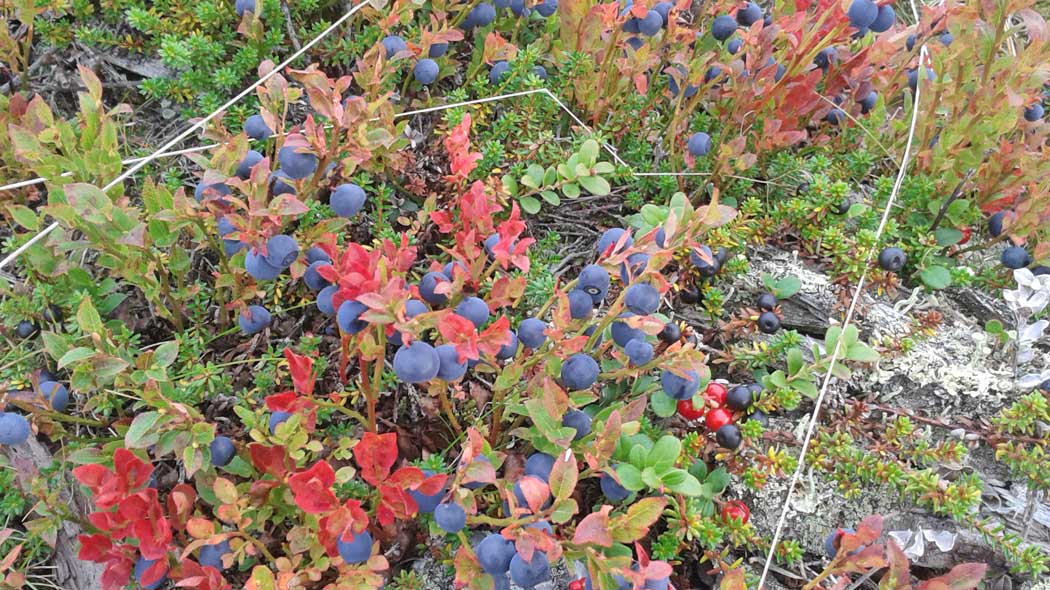 The vegetation in the lush river valleys is, at some places, luxuriant and grove-like: the Arctic Yellow Violet (Viola biflora), the Common Valerian (Valeriana sambucifolia) and the Siberian Lettuce (Lactuca sibirica), for example, grow there. The Mountain Sorrel (Oxyria digyna) is found on the cobbly soil of the riverbanks. It has been used by the Sámi people to improve the preservability of reindeer milk, and to add vitamin C to the diet in the winter. The birch is dominating on the fells: when the altitude is too much for the Mountain Birch (Betula pubescens ssp. czerepanowii), the twig-like Dwarf Birch (Betula nana) will still sprawl on the open fell fields. The microclimate of the steep fellslopes makes it possible for both arctic and southern plants to grow: Tufted Saxifrage (Saxifraga cespitosa) and the Wall Hawk's-beard (Crepis tectorum) grow on the rock walls side by side. Plants typical for palsa mires include the Black Crowberry (Empetrum nigrum hermaphroditum), the Dwarf Birch (Betula nana), the Marsh Tea (Ledum palustre) and the Cloudberry (Rubus chamaemorus). Kaldoaivi is the only place where the rare and protected Myricaria (Myricaria germanica) grows in Finland.

The northernmost pine forest in Finland, in its natural state, grows in the valley of the River Pulmankijoki. The northern distribution limit of the pine crosses the southern part of the wilderness area. Palsa mires are typical for Kaldoaivi area. The centres of  frost mounds on the palsa mires do not melt even in the summer.