Gyrodactylus salaris is a common parasite living on the skin of salmon (Salmo salar) in the whole area of Finland, except in northern Lapland. This parasite is about 0.5 mm long, so it cannot be seen by naked eye. With its sharp hooks, it attaches itself to the surface of the skin and fins of salmon juveniles. When eating the skin, the parasite causes small ulcers, which make the salmon juveniles vulnerable to diseases. 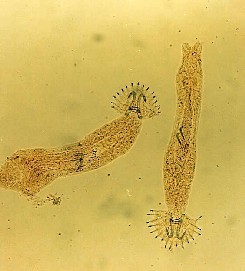 In Finland, the limit of the distribution of the parasite is the watershed of Maaselkä. It does not cause damage to the salmon juveniles or other salmonoids living in rivers south of Maaselkä which drain into the Baltic Sea.

In Norway, the parasite has destroyed the populations of Atlantic salmon in about 40 migration rivers. In favourable conditions the reproduction may be very fast: one individual can in a month produce up to 5 million new individuals. The parasite can also reproduce on the skin of the Rainbow Trout (Salmo gairdneri), the Arctic Char (Salvelinus alpinus), the Grayling (Thymallus thymallus) and the Trout (Salmo trutta).

Gyrodactylus salaris -salmon parasite has not yet spread to the valuable northern rivers of Finland which flow into the Arctic Sea.

Precautions are necessary, when a fisherman act carefully:

Do not wash and gut fish in any other location than that where you caught them. Bury all entrails into the ground, so that birds cannot spread the parasite.

Ensure that the bilge water of your boat does not reach other river systems. Do not throw household water from your caravan in rivers but absorb it into soil at a sufficient distance from the shore.

Bringing live or dead bait fish is prohibited in the area of Näätämöjoki river system, and when fishing with the permit of Metsähallitus in the area of the municipalities of Inari, Enontekiö and Utsjoki. In future, the ban will be expanded to cover all river systems draining into the Arctic Ocean.

Please note, that if going to Norway, you will need a disinfection certificate for your fishing gear.

When fishing gears must desinfect

The way to disinfect the gears

All fishing gear (boat, canoe, boots, rod, reel, lure, net, etc.) must be disinfected before moving to another river system.

If going to Norway, you will need a disinfection certificate which you can get at Neste petrol station in Inari and Koltta heritage house in Sevettijärvi.