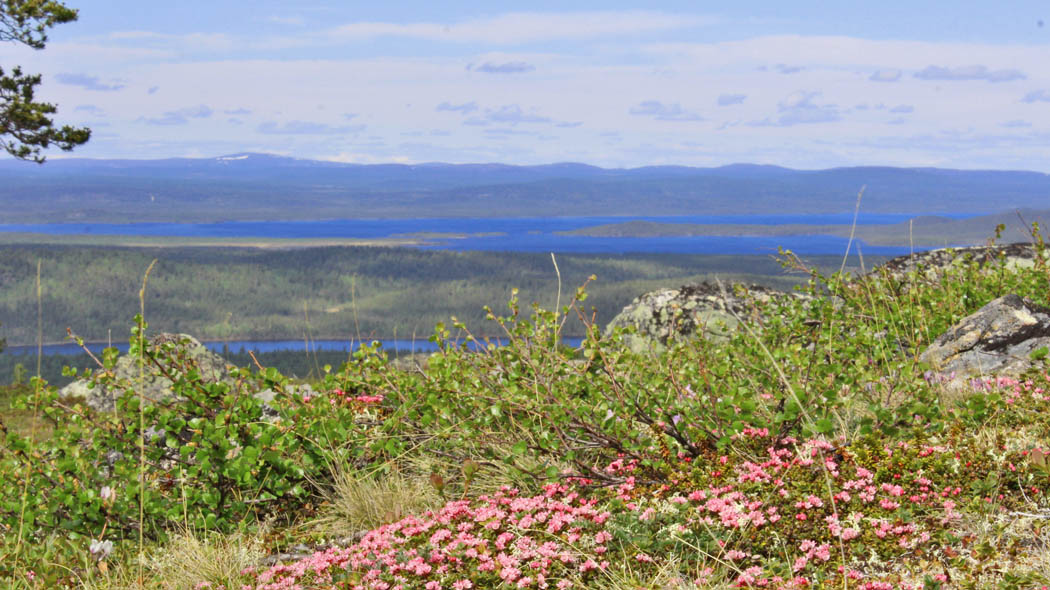 The natural beauty of Inari Hiking Area is captivating. The area is dominated by Lake Inarijärvi, the clearest and cleanest of Finland’s large lakes.

The islands of Ukonsaari, Kahkusaari, Jääsaari... It’s time for a canoeing trip! This harsh lake dotted with islands is a home to some species from the Arctic Ocean. Read more > 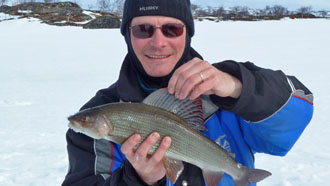 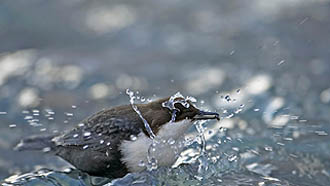 Juutua - the river of the Sámi people.

The fast-flowing rapids in this river are a paradise for fly fishing enthusiasts. In the winter, dippers swoop into the flowing waters in search of larvae. Read more > 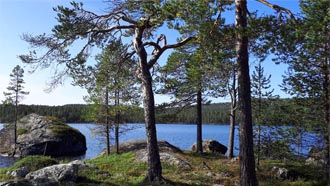 Old forests are easy to reach on foot. The lake’s best-known site is Karhunpesäkivi – the bear’s nest rock – a hollow rock artistically weathered by the Ice Age. Read more > 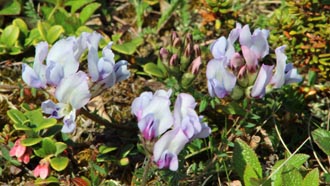 The yellow and white flowers of yellow oxytropis are a special sight on the shrub-covered fell heaths. This plant is a member of the pea family and very rare in Lapland. Read more > 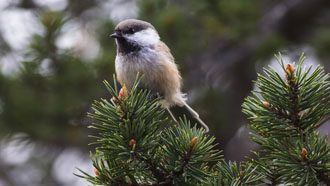 This round little bird has a large head and a long tail. It keeps hikers company all year round. The Siberian tit lines its nest with moss and reindeer hair. Read more > 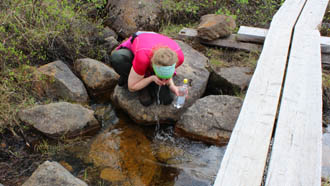 You can sort litter at the recycling points located in the boat harbours at Inari, Nanguniemi, Nellim and Veskoniemi. 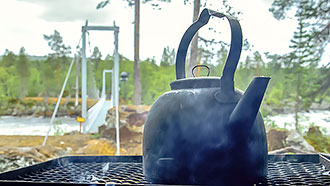 Enjoy the Inari archipelago with respect for nature

With the exception of special areas, everyman’s rights apply in the Inari Hiking Area. Remember to take nature and other users of the harbours into consideration.

Lake Inarijärvi (Aanaarjävri in Inari Sámi) is Finland's third largest lake (1084 km²). It is also the second-largest lake in the world north of the Arctic Circle. The deepest point in the lake is at Vasikkaselkä (92 metres). The lake was formed when the Earth's crust sank 70 million years ago. Lake Inarijärvi is characterised by broad, open waters, such as Kasariselkä and Vasikkaselkä. During autumn storms, the lake can produce waves up to two metres in height, with conditions comparable to being at sea. 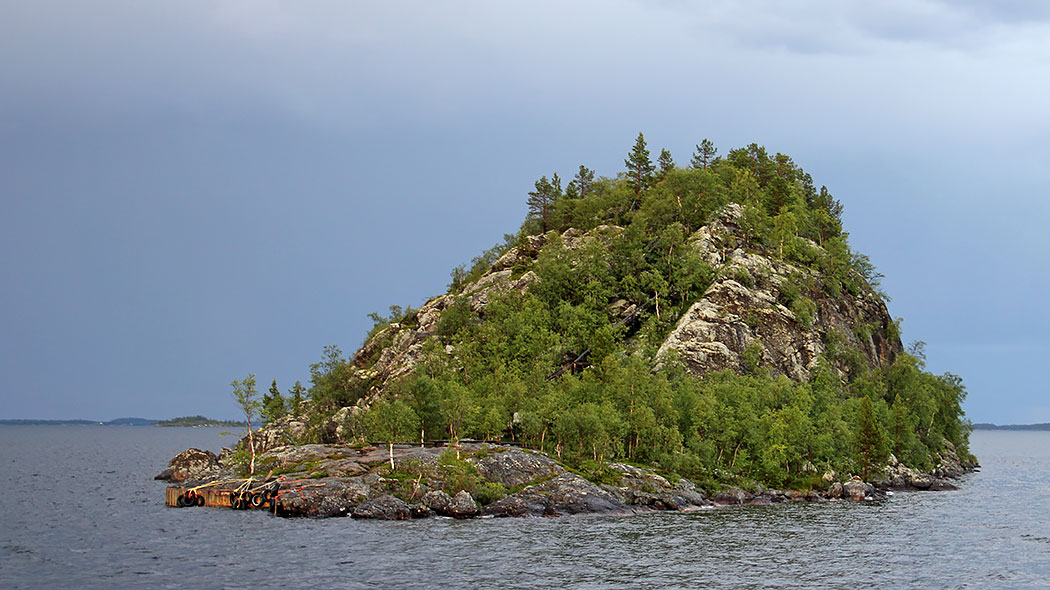 The total number of islands on the lake is 3,318. Small forest lakes and mires can be found on the largest islands. The larger, open waters contain treeless islets, which are called 'laassa'. The open waters are joined by long, narrow straits (called 'nuora'), such as Kaikunuora and Mahlattinuora. Long and narrow fjord-like bays are typical. The lake water runs down through the Paatsjoki River to the Arctic Ocean. Located on the barren bedrock of the Lapland granulite belt, the lake is a clear-water, sedge-type lake. The lake, although primarily barren in appearance, has patches of sedge horsetail in shallow areas. Dry pine forests dominate the islands.

The base vegetation found on many of the islands on Lake Inarijärvi is very heath-like in appearance. Particularly on smaller islands beaten by the wind, there are fewer trees and the crowberry, bog bilberry and marsh Labrador tea grow in dense mats on top of the thick humus layer. Because blueberries ripen late on the islands, you can still get a good harvest well into September. There are also excellent cloudberry patches on the islands.

The water level of Lake Inarijärvi has been regulated since the early 1940s, when several hydroelectric plants were built in Russia and Norway. This regulation interfered with fish spawning and waterfowl nesting, and it reduced the size of the water vegetation zones.

Lake Inarijärvi freezes in November-December, with the large open waters last to freeze, and the ice melts completely by the beginning of June. Snowmobiling and ice angling are possible even well past the first of May. Long-term statistics show that the open waters are freezing later and ice is melting earlier. The open-water season has been extended by approximately 20 days over the past 60 years. 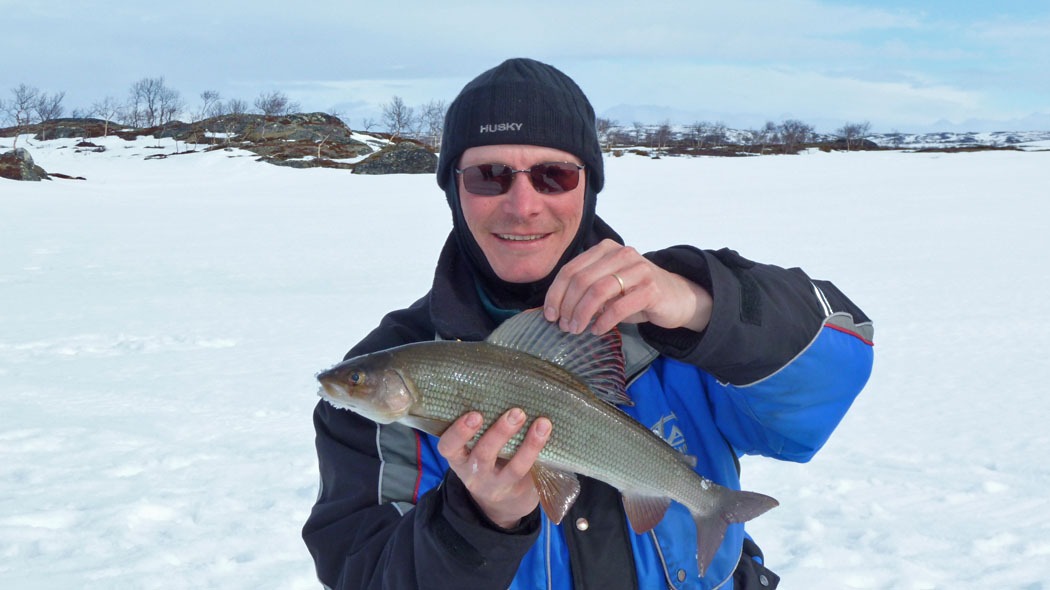 Lake Inarijärvi's widely varying fjards, islands and shorelines provide habitats for a very wide variety of bird species.  Over 100 different species nest on the lake, which also serves as a stopping point for migratory birds from Fell Lapland and then Arctic Ocean, such as the Lapland longspur (Calcarius lapponicus) and great cormorant (Phalacrocorax carbo). A majority of the birds encountered in the area are migratory, but local birds, such as the willow grouse (Lagopus lagopus) and grey-headed chickadee (Poecile cinctus)  stay the whole year round. Some of the more commonly found waterfowl on the clearwater lake are the red-breasted merganser (Mergus serrator), common goldeneye (Bucephala clangula) and black-throated diver (Gavia arctica), while there are fewer dabbling ducks due to the barren nature of the lake water. Of the waders found on the lake, the sandpiper appears in large numbers as they thrive on the barren shoreline. The gulls and terns nesting on the lake include the Arctic tern (Sterna paradisaea), whose migration from its wintering grounds to the nesting grounds in the north is one of the longest in the world.

Juutua - the river of the Sámi people

The Inari Sámi's home river Juutua (called Juvduujuuhâ in Inari Sámi, meaning 'The river of all rivers') passes through the village of Inari and into the Juutuanvuono Fjord. The surging Juutua River flows through the deep river valley between nearby fells, gathering water from surrounding forest areas and fells. Water flows through the river from the Menesjoki, Lemmenjoki and Vaskojoki in the west and the Kaamasjoki River in the north on its way to Lake Inarijärvi.

The ten-kilometre-long valley is surrounded by pine forests and sits at the foot of Otsamotunturi Fell. The vegetation along the Juutua River is lusher than its surrounding area. Here, you can see, among others, flood forests and groves, which are rare this far north. Finicky grove plants, which are rare for Inari, such as the Paris quadrifolia and the Wood Millet (Milium effusum), grow at Haapaniemi. Many flowering plants, such as globeflower (Trollius europaeus), garden speedwell (Veronica longifolia), common butterwort (Pinguicula vulgaris), moor-king (Pedicularis sceptrum-carolinum) and heath dog-violet (Viola canina) with its large blooms, thrive on the rocky flood meadows of the riparian areas.  Ice and spring floods shape the banks and keep them open. The Strict primrose (Primula stricta) thrives on open riverbanks and bare shoreline rocks, getting its water from splashing waves. This extremely endangered species is commonly found along the banks of Inari's larger rivers, but its numbers are dwindling farther south due to the construction of hydroelectric plants. On the slopes of fells, groundwater pushes its way out of springs and creeks, whose banks are thick with lush wilderness vegetation and small fens.

In the summer, the river's occasionally lush banks serve as a nesting site for what is an extremely wide variety of bird species by Inari standards. In the winter, the meltwater of the Juutua River attracts the White-throated Dipper (Cinclus cinclus), which is a unique wintering bird. The Juutua River is one of the white-throated dipper's most important wintering grounds. The white-throated dipper is usually a very easily spotted bird, exploring the river banks and dipping into meltwater in search of food. In the late spring, the meltwater of the Juutuanjoki River is a key rest stop for migratory birds.

The pine forests in the Inari Hiking Area are dry crowberry-blueberry type heath forests. The lightness and lack of understory make it easy to hike through the pine forests, even though they can be a bit rocky. Old-growth pine forests are populated with wood-decaying fungi, or saprotrophs, some of which are rare fungi, such as the Gloeophyllum protractum and Antrodia primaeva. The landscape along Highway 4 between Ivalo and Inari, with its sheer, rocky fells, is truly breathtaking. Marked hiking trails will take into the patchwork of mires and forest lakes, but there are also remote wilderness areas here. If you want to see old-growth pine forests, you can easily stop at Karhunpesäkivi Rock at Lake Myössäjärvi. 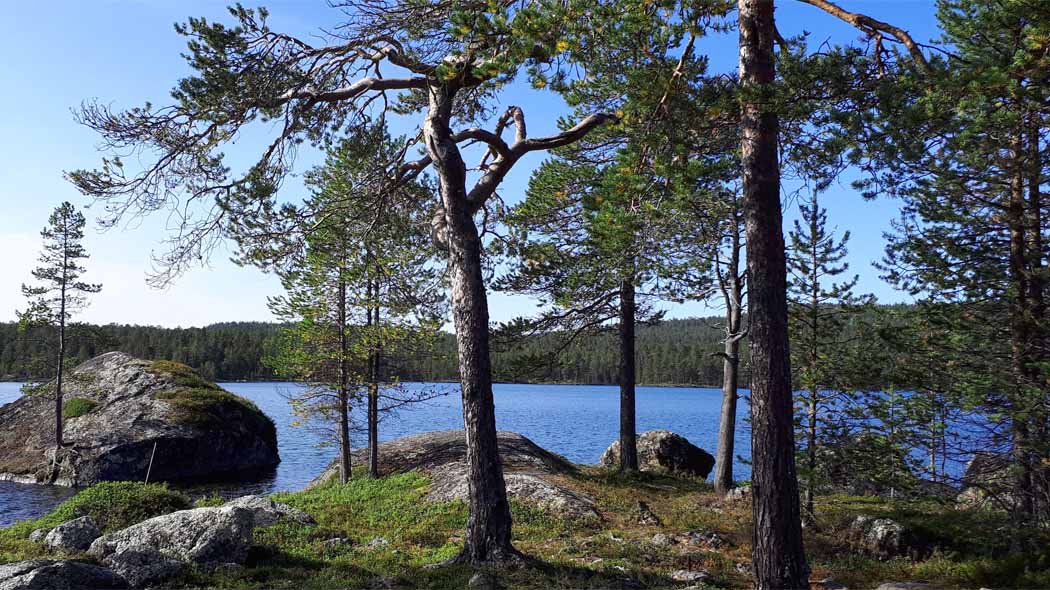 The pines on the slopes of Karhunpesävaara Fell are some of the oldest on the Fennoscandian Peninsula, with the oldest specimen being at least 770 years old and others over 400 years old. Old-growth pines have been spared from forest fires over the centuries. 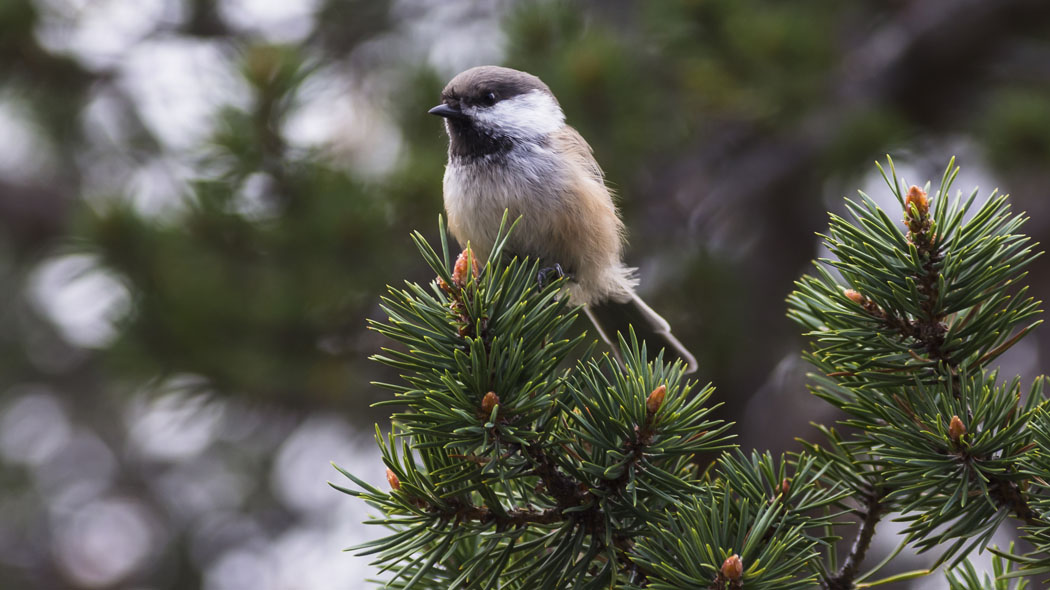 The brambling (Fringilla montifringilla) is the main bird species in the Inari Hiking Area. The old-growth forests are key nesting grounds for, among others, the wood grouse (Tetrao urogallus), Eurasian three-toed woodpecker (Picoides tridactylus), Siberian tit (Poecile cinctus) and Pine grosbeak (Pinicola enucleator). Of the birds of prey in the area, the rough-legged buzzard (Buteo lagopus) and merlin (Falco columbarius) are the most common.

The highest fell in the Hiking Area, Otsamotunturi (418 metres above sea level) dominates the landscape from Juutua all the way to Lake Inarijärvi. The zonation of vegetation by elevation can be seen on the slopes of Otsamotunturi. Valley pine forests give way to fell birch stands at an elevation of approximately 250-260 metres. The conditions at the summit are harsher and birch stands may give way to a treeless summit area. Vegetation at the summit is low-growing fell heath, which is dominated by crowberry (Empetrum nigrum). Dwarf birch might even grow close to the ground to gain protection from the elements. In addition to common shrubs, fell scrub, such as creeping azalea (Loiseleuria procumbens), blue mountain heath (Phyllodoce caerulea) and the pincushion plant (Diapensia lapponica), grow in dense mats at the summit. Right at the beginning of summer, the scrub at the summit of Otsamotunturi explodes in red and white blooms, competing with the field locoweed. The field locoweed (Oxytropis campestris), which is a legume, is a rarity at Inari. The flowers of the Alpine bearberry (Arctostaphylos alpina) are very modest in colour, but in the autumn its leaves turn a brilliant, deep red, outdoing the rest of the scrub. 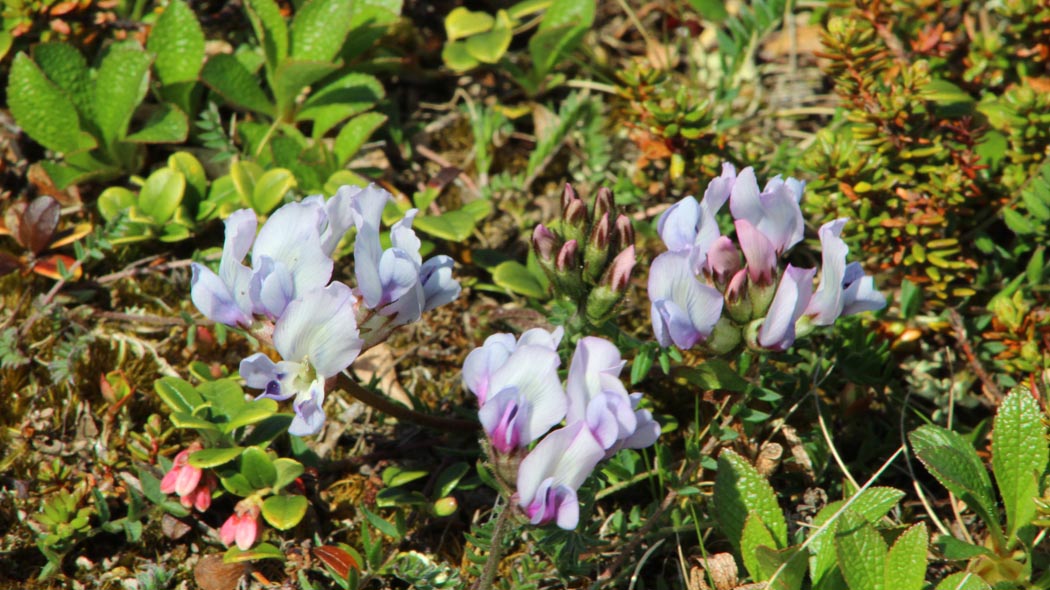 The zonation of vegetation also offers birds a wide range of environments. Indeed, hikers reaching the summit of Otsamotunturi might encounter the gregarious Siberian jay (Perisoreus infaustus), hear the gentle twittering of a common redpoll or the melancholy call of the Eurasian golden plover (Pluvialis apricaria). 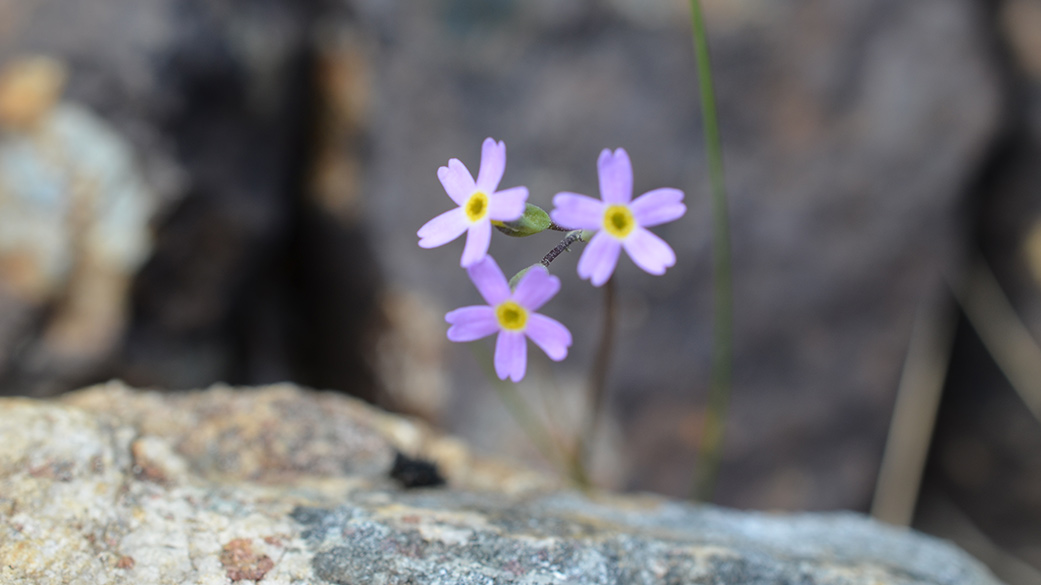