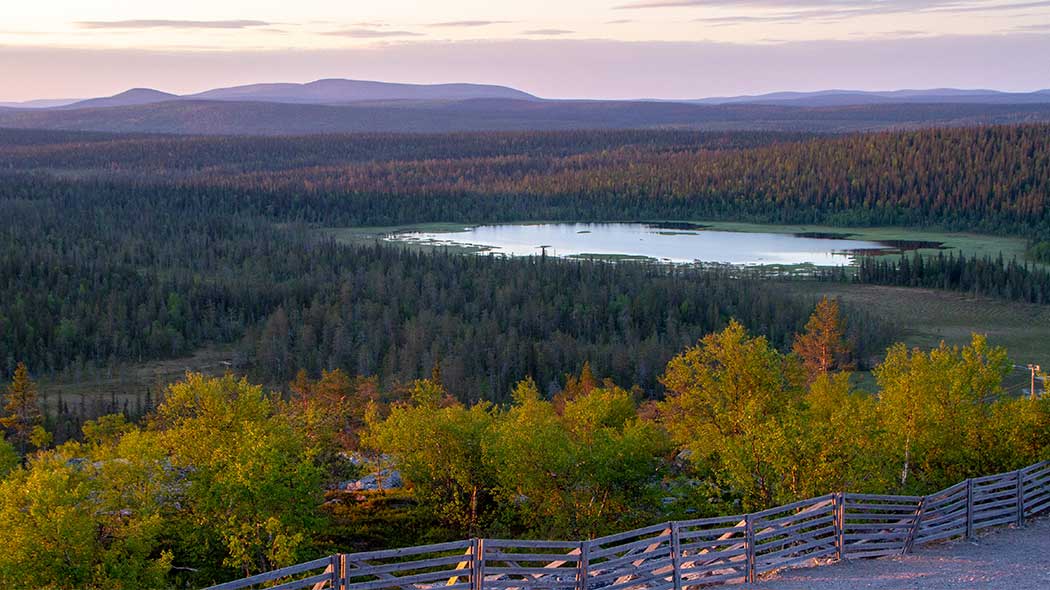 South Salla is a transition zone and hill top forests with crown snow battered spruce trees typical of the Kainuu area are just as common here as wet flarked aapa bogs typical of Southern Lapland area. In the South Salla area there are also lush mires as well as demanding plant species which grow in lime rich soils. The area's animal population is diverse as well.

In the southern portion of Salla Municipality there are numerous areas which are part of nature conservation programmes. The Natura 2000 programme has combined these areas to form integrated protected areas. The Sallatunturi Fell Area's hiking trails give hikers the opportunity to experience the natural features and landscape of three Natura Sites. 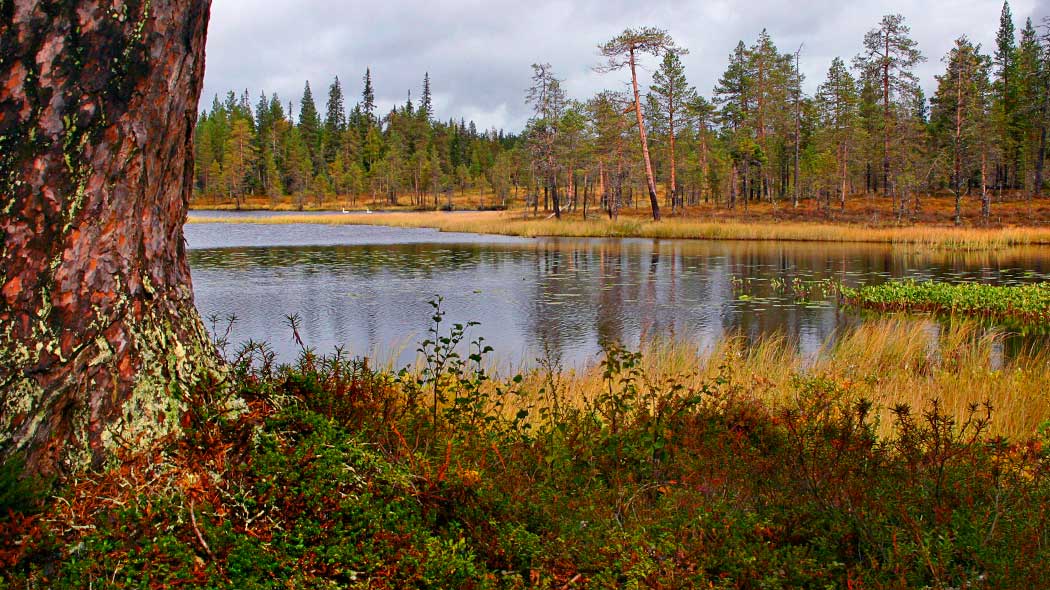 The Bear's and Eagle's Kingdom

The Black Woodpecker (Dryocopus martius) and Paridae species thrive in old-growth forests, where they can find food and shelter in decaying wood. Old spruce forests are also home to the Great Grey Owl (Strix nebulosa), which is almost the size of a Northern Eagle Owl (Bubo bubo). With the help of its exceptional hearing the Great Grey Owl preys on moles, which it can hear even when they are under a layer of snow. Common forest tetraonids found in the area are the Western Capercaillie (Tetrao urogallus), the Black Grouse (Tetrao tetrix) and the Willow Grouse (Lagopus lagopus) and visitors may hear the whistle of the Hazel Grouse (Bonasa bonasia) from the shelter of the spruce trees.

There is a rich mire bird population in the area, which includes such species as the Common Crane (Grus grus), the Whooper Swan (Cygnus cygnus), the Bean Goose (Anser fabalis) and the Lapland Longspur (Calcarius lapponicus). Many falcons, owls and waders are also found in the mires. The Bluethroat (Luscinia svecica), which has been dubbed Lapland's nightingale, thrives in the area's overgrown mire meadows. In Salla's wilderness-like areas visitors may spot the Peregrine Falcon (Falco peregrinus) or the Golden Eagle (Aquila chrysaetos) on the hunt for food.

Salla, which is located close to the Finnish-Russian border, is also the bear's (Ursus arctos) kingdom. Visitors can come across signs of this grand creature's existence, such as dug up ant hills. It is more likely however that visitors will come across moose (Alces alces) or reindeer (Rangifer tarandus). Horsetail lichen (Alectoria) is vital winter food for reindeer. 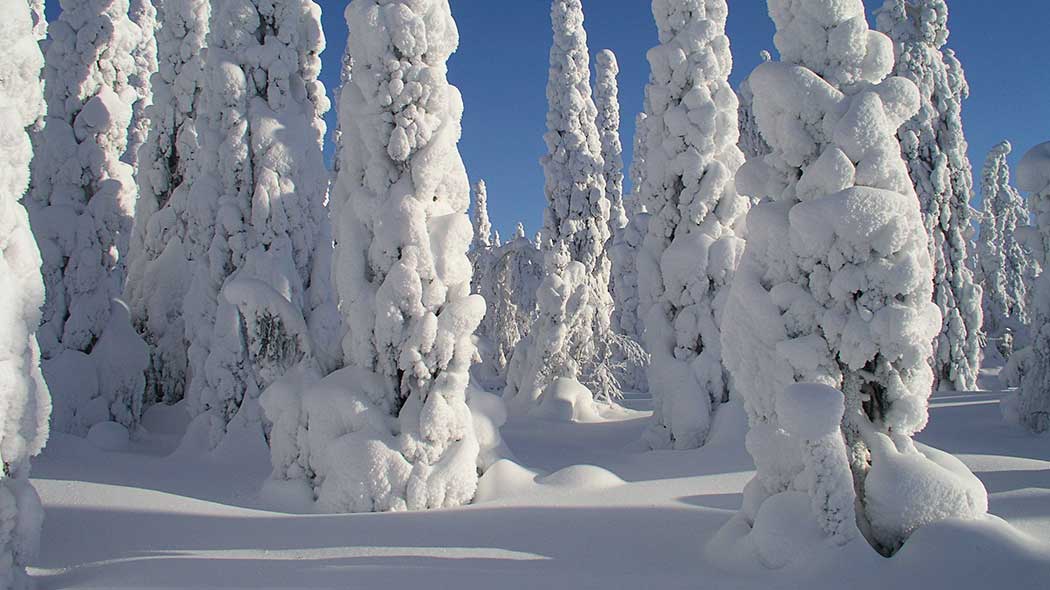 Spruce forests on a bed of thick moss are characteristic of the Salla uplands. The spruce is the species of forest growth line as there is no clear birch zone on the upper fell slopes. These spruce forests are sparse, light and easy to travel in, as is typical of forests in fell top areas. The trees are candle shaped with short branches. Spruce with shorter branches take less of a beating from heavy snow loads than long branched ones do.

The Koillismaa Region receives the most snow in all of Finland and frigid temperatures are common. Damp air masses condense during winter in the top branches of spruce trees high on fell tops of Salla. The branches can hold hundreds of kilos of snow and ice, which is known as crown snow loads. The snow loads break branches and can even cause a whole tree to fall down. It can also damage trees and leaves behind dead standing trees, decaying standing trees and decaying fallen trees. Decaying wood is essential for the survival of many mushroom and insect species. Because of the abundance of decaying wood some threatened polyporous fungi have been found in Salla's protected areas. One such fungus is the Amyloporia crassa which thrives on large, fallen, decaying pines. 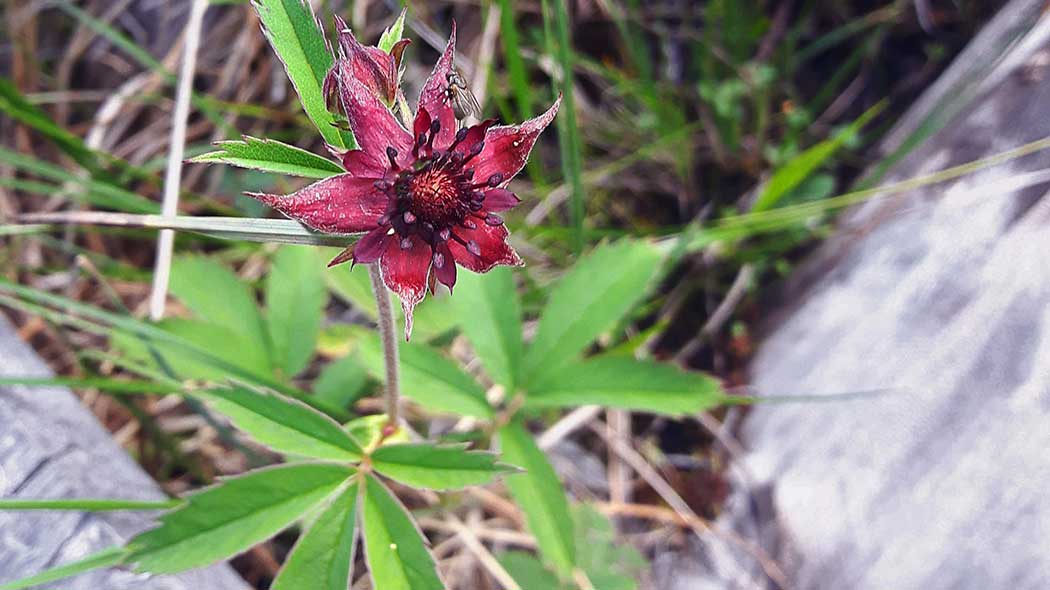 The Salla areas dry forests are generally rugged and sparse in species. Those that can be found are the common blueberry (Vaccinium myrtillus), the bog bilberry (Vaccinium uliginosum) and the marsh tea (Ledum palustre). On the hill slopes there are lush streams by which you will find full ferns and common globeflowers (Trollius europeus). On the stream bank one can find the faint lilac flowered alpine sow thistle (Cicerbita alpina), which is rare in Finland except in the Koillismaa Region.

Mires in the Salla Area are exceptionally nutrient rich because of the calcareous bed rock. Fens which are quite rare these days in Southern Finland are common in the area. Types of fen vegetation most often found in the area are the broad-leaved bog-cotton (Eriophorum latifolium), the heath spotted-orchid (Dactylorhiza maculata) and the enthralling insect eating butterwort (Pinguicula vulgaris). In the fens there are many threatened demanding species, of which the yellow marsh saxifrage (Saxifraga hirculus) is even common in the vast Suksenpaistama - Miehinkävaara Mires. 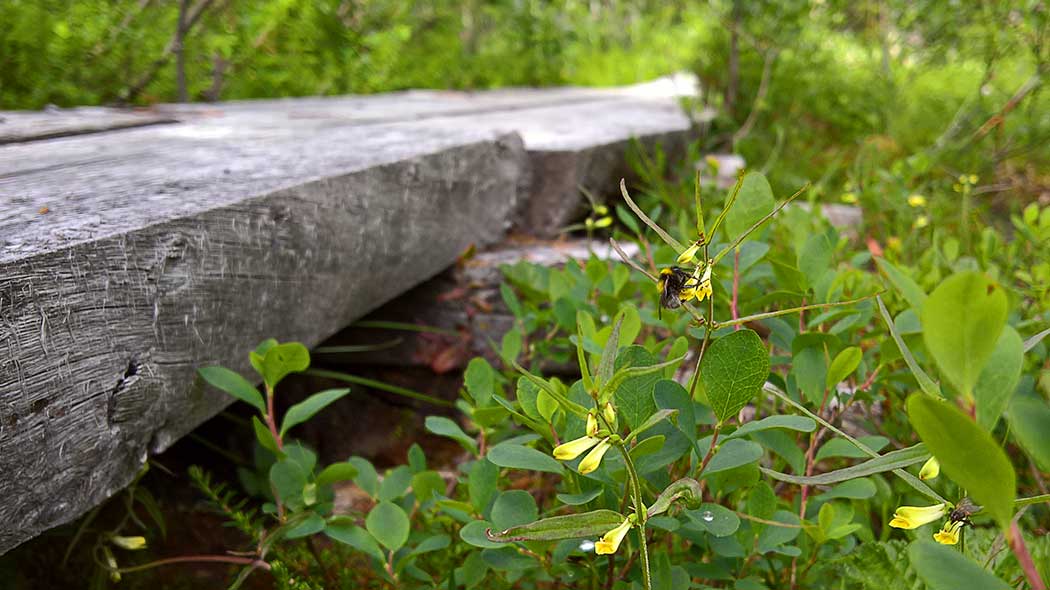 A Glacial Lake Once Covered the Salla Area

Around 10 600 years ago during the last Ice Age, large portions of Eastern Lapland were covered by glacial lakes, which remained there for up to several centuries. The largest of these was the approximately 4 500 sq km sized Salla glacial lake. It was over three times the size of Lake Inarinjärvi. Salla glacial lake was formed when the continental glacier withdrew to the west as it melted. It acted as a dam for melting waters and blocked the water from flowing west through Kemijoki River valley. The glacial lake therefore flowed east. On the fell slopes surrounding the Salla Area at an altitude of about 230 - 240 metres there are signs of scree rocks ancient shores.

Several ridge chains slice through the Salla Area from northwest to southeast. The ridges were formed during the melting stage of the Ice Age near the edge of the ice as melting waters piled sand and gravel into the tunnels and channels within the ice.

Kolsanharju is one of the most valuable ridges in Salla. The ridge follows the River Tenniöjoki and stretches into Savukoski in the southwest and far into Russia in the southeast. Kaunisharju (made up of Kauniinhaudanharju Ridge and Hanhiharju Ridge) southeast of Sallatunturi is one of the area's sights and can be reached easily by road 950 (Salla - Kuusamo) which leads along the ridge.

Aatsinginhauta Canyon, which is approximately 20 km long and located to the east of Sallatunturi, is a good example of the erosion times of different rock types. The canyon was formed over the span of millions of years by erosion and the wear and tear of ice ages. The layered sediments that were where Aatsinginhauta canyon is now have been more susceptible to erosion than the volcanic rocks of the surrounding areas. The difference in altitude between the surface of Lake Sotkajärvi, which is at the bottom of Aatsinginhauta Canyon, and the peak of Petservaara, the highest hill on the edge of the canyon, is over 250 metres.

On the northeast side of Sallatunturi Fell there is a 97 sq. km area which begins at the tourist centre's edge and stretches to the Russian border. The area's magnificent hilly landscape is easy to view from road 950 (Salla - Kuusamo) which leads along Kaunisharju Ridge. From the road there is a vast view to the north over forests in their natural state which are dotted with dead standing pines. The treeless and scree rock covered peak of Iso Pyhätunturi Fell dominates the landscape. The 20 km long Aatsinginhauta Canyon is partially in this area. In the canyon there are natural features such as rare herb-rich forest species. On the north side of the rugged wilderness lake - Lake Onkamojärvi there is a large old spruce forest area.

The 53 sq. km Peuratunturi Natura Site is located 10 km southwest of the village of Salla. The area's forested hills have remained predominantly in their natural state. The Natura Site includes the grand Salmijoki Ravine which boasts very old scots pines.