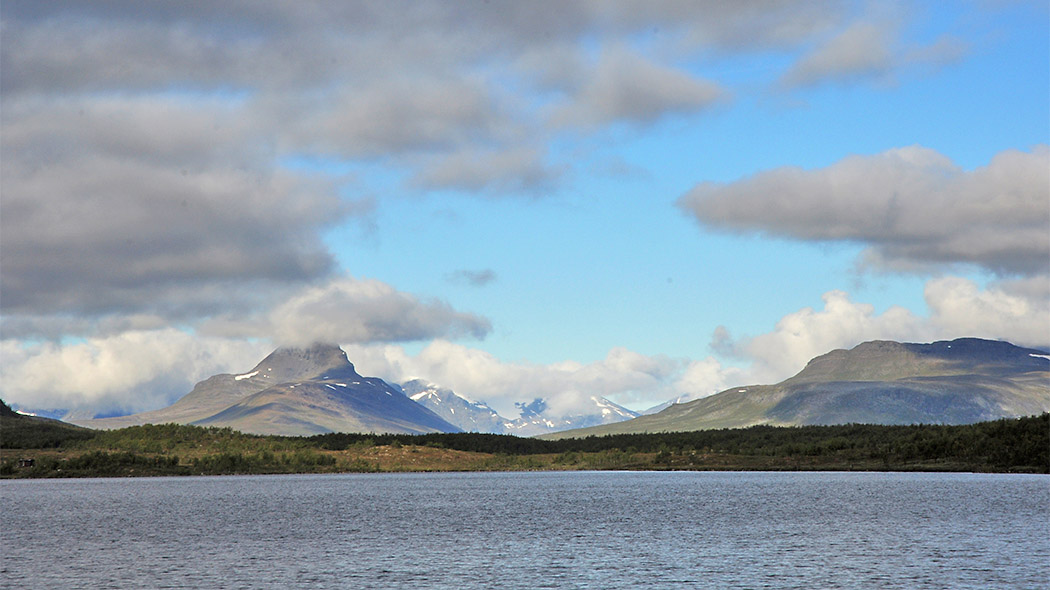 Hikers setting off in the direction of Abisko can start their trek by travelling through Malla Strict Nature Reserve to Kuohkimajärvi open wilderness hut.

The starting point for the trail is at a parking area at the north end of the village of Kilpisjärvi just south of Lake Siilasjärvi. You can also get onto Nordkalottleden Trail from the nature trail which starts off at the foot of Saana Fell. Nordkalottleden Trail turns off the nature trail before reaching the top of the fell. After crossing a road the trail comes to a parking area from where it continues west towards Malla Strict Nature Reserve. When going into a strict nature reserve visitors should read the reserves rules and regulations.

From Kilpisjärvi you can get to Malla Strict Nature Reserve by the Malla Boat, which sails between Kilpisjärvi and Kolttalahti three times daily during the summer peak season if there are enough people on board.

Nordkalottleden crosses into Sweden at the point where Finland's, Sweden's and Norway's borders meet. The trail climbs a 100 m incline to the bare top of Tuipali and descends to the lush Pältsa Valley.

No key is needed to get into huts in Sweden, as each hut has an employee present during peak season. This person takes payment for accommodation and can offer information to visitors. Huts in Sweden are owned by Svenska Turistföreningen (svenskaturisforeningen.se). Maps which would be useful when hiking in Sweden along Nordkalottleden are for example Fjällkartan BD 1.

This is a new section of Nordkalottleden Trail and therefore the path is not as clear as at other points. From Pältsa (svenskaturisforeningen.se, in Swedish) the trail ascends along easy to travel sandy paths to the top of Måskåkaise. After crossing the Norwegian border the trail is marked with stone pillars. The trail leads past the south side of Lake Måskåjärvi towards Rostahytta hut (ut.no, in Norwegian)

Huts in Norway are locked and owned by Troms Turlag. Hikers can get the keys to these huts from Norwegian customs at the Kilpisjärvi border crossing. Keys are given out in exchange for a deposit.

From Rostahytta hut the trail goes 6 km uphill. After this there is an 8-km-long portion which is very rocky and after this it begins to descend down the side of the fell towards Daerttahytta hut (ut.no, in Norwegian), which is located in Øvre Dividal National Park (nasjonalparkstyre.no, in Norwegian)

Nordkalottleden Trail passes through Øvre Dividal National Park for over 10 kilometres across gently sloping tundra. Between Daerttavagg and Skaktardalen there are a couple of wide river crossings. Next the trail crosses fells. The difference in altitude between the trail's highest spot and the bottom of Dividal Valley is 600 metres. After crossing the bare tops of fells the valley is surprisingly lush. Dividalshytta hut (ut.no, in Norwegian)  is located halfway up the Jierta hillside and there is a spectacular view from it.

After Dividalshytta hut the trail crosses the River Divielva along a hanging bridge. Nordkalottleden Trail climbs past fell birch forest to open peaks with far stretching views. Vuomahytta hut (ut.no, in Norwegian)  is located at the mouth of a U-shaped valley.

After passing Vuomahytta hut the trail climbs further up. The highest point of the trail is at 950 metres and from there it begins its descent to Gaskashytta (ut.no, in Norwegian)  and Altevatn.

The lower slopes of Litjälkt do not offer hikers any wonderful nature experiences with all their shrubbery and muddy trails. Before reaching Innset there are pleasant camping sites. At Innset hikers can find accommodation as well as a bus which will take them to Narvik.

Altevatn is a dammed lake which is tens of kilometres long. There are around 400 private summer cottages at its west end. To pass these you must follow the road that goes through the area.

The next portion of the trail has been travelled somewhat less. There are three river crossings. The bridges are often damaged by floods so they may be unsteady. Before reaching the Swedish border hikers come to Troms Turlag´s Lappjordhytta hut (ut.no, in Norwegian)

Nordkalottleden Trail descends down a steep hill towards Lake Torniojärvi and the Swedish border. Pälnovik has an open hut (rare in Sweden). It sleeps 4. The trail leads to Björkliden by the side of a railway track. Abisko Turiststation (svenskaturistforeningen.se) provides information on train timetables. You can walk the 8 km to Abisko along a road built by workmen who originally built the track.