When the first people began roaming the Eura area around 7,000 years ago, the environment was completely different to that we see now. Lakes Pyhäjärvi and Köyliönjärvi formed a wide ocean bay, with a few large and many small islands at its mouth. As the centuries passed, the sea receded due to land uplift and the islands merged.

Most relics found in Eura date back to the Stone Age, around 6,000 years ago, a period known by historians as the Jäkärlä cultural period which represents the western Finland version of Pit-Comb Ware culture, named after the large dwelling site at Jäkärlä in Maaria. Some of the most notable dwelling sites of this period are located in what is now Eura.

The largest area containing relics from the Stone Age is located on a sand ridge that begins by the Kauttua shopping centre and stretches beyond Käräjämäki hill and the destroyed Osmanmäki hill. During the Stone Age, there was just one stretch of coast along which people moved and lived. The stone objects and findings thought to be fireplaces are from the latter stage of the Pit-Comb Ware period and the Jäkärlä cultural period.

Käräjämäki hill was used as a burial site during the Iron Age. Even today, dozens of oblong depressions on the ground are visible in the area, indicating the places where bodies were buried. Some of them are deep pits surrounded by a low wall, providing evidence of graves opened by early archaeologists and grave robbers. The total number of depressions is almost 200. In addition to these, the area contains graves that are not visible from the ground. The oldest Iron Age graves were cremation pits where people were buried during the Migration Period (400–500 AD), and the youngest date back to the Viking Age.

Most of the graves examined on Käräjämäki hill are from the Merovingian Period (600–700s), when people living in the environs of Lake Pyhäjärvi adopted new burial customs and no longer cremated their dead. In other parts of Finland, this did not happen until a couple of centuries later, during the Viking Age. The underlying reason for this may have been the influence of Christianity, which was spreading through Europe, or just a change in local burial traditions. In any case, more burial grounds have been identified in Eura than any other Finnish dwelling site from that time. One of the best-known burial sites in Eura is situated on Käräjämäki hill and the adjoining Osmanmäki hill.

On the hilltop, a "Court circle", or "judges' stones" mark two graves. Twelve stones now form the circle,  but according to folklore, a large flat stone used to stand in the middle. It was later moved to the foundation of the Iso-Vahee house nearby. Two pit graves have been found inside the stone circle. The bones of cremated corpses were placed in these pits. Findings in the grave on the western side include pincers, a knife and a fragment sheath knife, whereas the eastern grave contained a woman's jewellery including glass beads, fragments of bronze rings and a bronze clasp with a hole in it. The findings were from the early Merovingian Period, the 600s.

Next to the stone circle there are two earth mounds, one 7 m and the other 5 m in diameter. These were examined during excavations in the late 1800s and proven to be burial mounds from an age prior to the Viking Age. 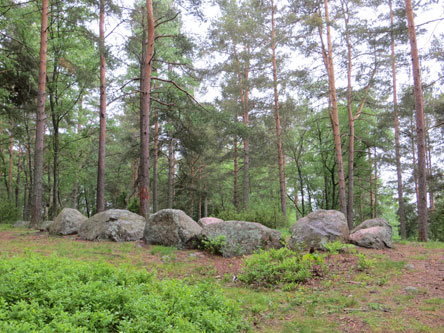 The best-known grave examined in the area is known as the Swordsman's or Chieftain's grave. The grave pit in itself was exceptionally large, at over three metres long and one metre wide, lined with wood and completely covered with red sandstone slabs. In the late 500s, this deceased was laid to rest with a sword, a large shield knife, a spear and a shield. Only parts of a belt and a spiral ring remain of the dead person's attire. A large, unused sharpening stone made of quartzite made this grave exceptional. Based on similar findings in western Europe, it is thought to be the symbol of a chieftain.

Käräjämäki Hill Bequeathed to the State in 1932

The idea that Käräjämäki hill was used as a burial site has been passed down the generations as folklore. In his description of the Eura parish, G.I. Lindström mentioned that in 1849, the landowner had opened 10–12 pits that were thought to be graves, but had found only one rusty spear-tip. Weapons had occasionally been found on previous occasions when removing sand from the hill. Official excavations were held in the late 1800s and 1900s, sometimes inspired by burial sites revealed during sand extraction. The last excavations took place on Osmanmäki hill in 1985, showing that Osmanmäki had been completely destroyed by sand extraction and construction.