The Nature and Culture Trail of Juutua

On the trail, illustrated by Merja Aletta Ranttila, visitors can find out about the colourful history of the home river of the Inari Sámi people, Juutuanjoki River. The material has been collected by interviewing the local people and visitors, and from the literature. Juutua trailis the first and so far the only nature trail which also has texts in Inari Sámi language. The illustrations are made by Merja Aletta Ranttila. 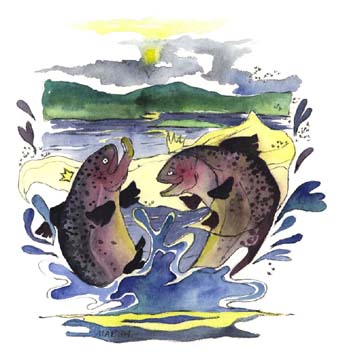 Juutuanjoki River is the home river of the Inari Sámi people, and it has always been a meeting place, where stories have been told. Along this trail, you will find stories about people and events of Juutua, and about fishing.

In the summer, Globe flowers (Trollius europaeus) grow on Juutuanjoki River, and Graylings (Thymallus thymallus) jump out out the water. In the autumn, fisherman catching Trouts (Salmo trutta) occupy the river and the riverbanks, and Birches (Betula) and Aspens (Populus tremula) are blazing with their beautiful autumn colours. In winter lighted trail is easy to walk and explore close to north nature. As well as look where the Aurora Borealis light up on the sky.

The trail on the southern riverbank starts at the Saarikoskentie road, about one kilometre away from Siida. The starting point is on the left side of the road, just before the Inari aquaculture station. After that, you continue for roughly 600 metres until you arrive at a small clearing; cross it, and follow the trail. After roughly 300 metres the trail turns left. 2.2 kilometres from the start, you will arrive at the Akselinlaavu lean-to shelter. From the lean-to shelter it will be another 550 metres to the bridge at the Jäniskoski Rapids. The section from the Saarikoski Rapids to the Jäniskoski Rapids is lit and will be cleared of snow in the winter.

After the hanging bridge at Jäniskoski Rapids, the Juutua Trail runs along the northern riverbank and is marked with orange signs. By the Jäniskoski Rapids, on the northern side of the river, you will find a campfire site and a lean-to shelter. About 100 metres from the lean-to shelter, the trail reaches a reindeer fence and continues for another 180 metres until it comes to a trail crossroads, where another trail branches off towards Otsamotunturi Fell. After hiking some 1.6 kilometres from the Jäniskoski lean-to shelter, you will arrive at a gravel road and follow it for about 600 metres. The trail then becomes narrower and continues uphill into a pine forest, reaching highway E75/E4 just north of Siida.

Pictures and stories about Sámi culture by Merja Aletta Ranttila

Merja Aletta Ranttila (born in 1960) is the illustrator of the trail, and the best-known Sámi artist in Finland. She has become famous for her paintings about Sámi culture, and her impressive lino carving art. She has also worked as the illustrator for many books by Sámi writers, and for many textbooks in Sámi language.

In addition to pictures, Ranttila has published Ánde books for children in the 1990s in Sámi language. In 1999 was published a book of poems and pictures by Merja Aletta Ranttila. In her work, Merja Aletta Ranttila has dealt with her own feelings from childhood, and addressed also current things such as wars and environmental catastrophes. In the recent years, the sad tones have been balanced by new tranquility and light, which can also be seen in the illustrations along the nature and culture trail.