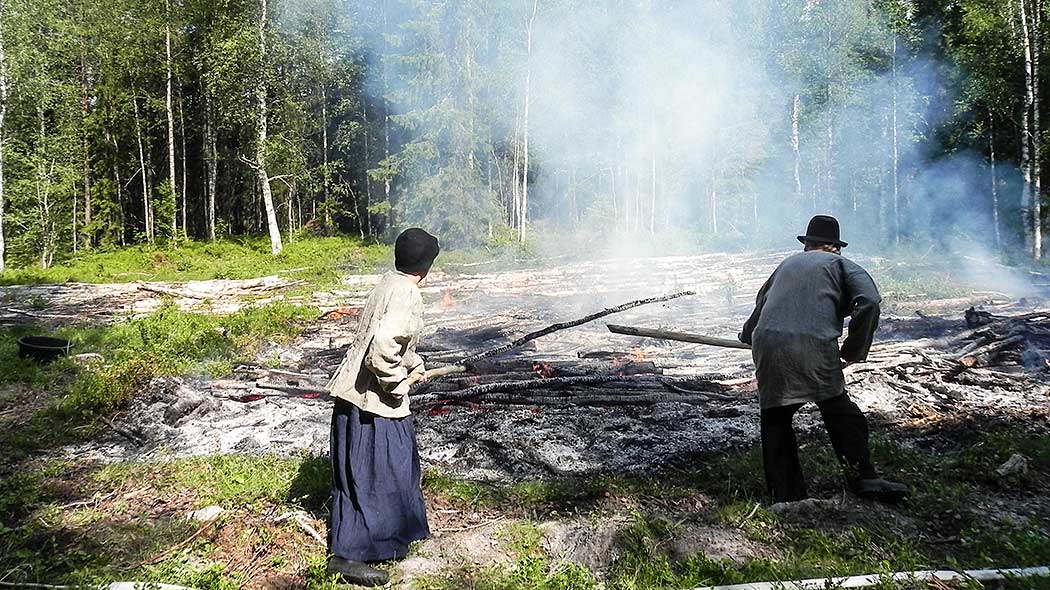 Hiidenportti was formed when the earth's crust folded. Later on ice ages moulded and smoothed out the earths surface. When the continental glacier melted 10,000 years ago the water formed the Sotkamo Ice Lake, which pushed its way through Hiidenportti Gorge towards the southeast.

When the melting glaciers formed rivers they sifted earth types, thus forming ranges of ridges at both ends of Porttijokilaakso River Valley. The northwest ridge runs towards the centre of the municipality of Sotkamo and the southeast one reaches into North Karelia.

At its deepest the drop is 20 m and the rock-face is sheer. The gorge is about 1 km long.

The backwoods and other wilderness-like areas of Hiidenportti National Park were in the past distant hunting lands. These distant woods also provided robbers and outlaws with a hide-away. An old tale tells the story of how Hiidenportti was discovered by these hoodlums.

The first permanent inhabitants arrived in Hiidenportti in the 18th century and settled on Kovasinvaara Hill. Sources of livelihood for the inhabitants of the wilderness croft there included fishing, hunting, small-scale slash-and-burn farming and tar burning. In the early part of the 20th century the croft was renowned for the Hiidentanssit Dance held there every July. People from all over Kainuu and North Karelia gathered there.

On the first weekend of July young people from all around Kainuu and North Karelia would gather at Kovasinvaara Hill. At that time there was a suitable break in farm work and young people had time to socialize and dance. These festivities lasted two, three days or possibly even a week, and usually involved a visit to Hiidenportti Gorge. At first visitors brought their own foods with, but the farmer´s wife quickly realised there was money to be made by opening a café for these youngsters. People also tended to drink Moonshine (illegally manufactured spirits). Brawls did not generally occur at these festivities, but it was the meeting place for many a couple, who in future got married.

This tradition ended in 1949, when the farm became state-owned. The buildings of the croft are no longer standing. All that remains to remind visitors of its existence are stone pillars covered by vegetation, overgrown meadows and the surrounding lush young forests on former slash-and-burn clearings.

Residents of near by houses still mowed hay from the National Parks mires in the 20th century. The hay was stacked and transported to farms when winter came. The pits left by these stacks can still be found at Mustalamminsuo Mire and Urposuonniitty Fen Meadow.

The River Porttijoki was cleared in the beginning of the 20th century so that it could be used for log floating. For this reason the river is not totally in its natural state though there are only few visible signs of log floating left anymore. Dam structures are still standing on the shores of ponds at Kitulanlampi and downstream from Pitkä-Portti.

The rich cultural history of the area is also presented in a booklet "Hiidenportti Through the Ages" (julkaisut.metsa.fi). The booklet can be found free of charge at Kuhmo Visitor Centre Petola.

The Origin of the Name Hiidenportti

According to a Finnish myth a demon called Hiisi, who lived on Vuokatinvaara Hill, was horrified when he heard church bells ringing when Christianity was first brought to Finland. He first tried to throw two large rocks at the church, but missed. Disappointed, he gathered his livestock (wolves, bears, wolverines and lynx) and moved to the backwoods of Hiidenportti (Hiisi's Gate). According to tales the ominous round pools at the bottom of Hiidenportti Gorge are Hiisi's eyes.

The emblem of Hiidenportti National Park is Great Grey Owl