Lauhanvuori-Hämeenkangas Geopark applied for UNESCO's Global Geopark membership in autumn 2018 after a long preparation, and the story culminated at the beginning of July when the UNESCO Executive Board decided to approve the region for the Geopark programme and as a member of the international network. In Western Finland, the Geopark located in three regions became Finland's second UNESCO Global Geopark after the Rokua National Park.

The Lauhanvuori-Hämeenkangas UNESCO Global Geopark is located in Western Finland on the border of three regions. The Geopark municipalities include Kauhajoki, Isojoki and Karijoki in Southern Ostrobothnia; Kankaanpää, Karvia, Honkajoki, Jämijärvi and Siikainen in Satakunta; and Parkano and Kihniö in Pirkanmaa. For years, the municipalities have been developing the area aiming towards a membership in the UNESCO Global Geopark network in close cooperation with Metsähallitus, the Natural Resources Institute Finland, companies, associations and residents as well as numerous other partners. Now all the hard work is rewarded.

The main geological theme of the Lauhanvuori-Hämeenkangas UNESCO Global Geopark depicts the development of the landscape from ancient mountains to the present mire. In an international context, the most important special features of the area are Lauhanvuori's long and multi-stage geological history, valuable mire entities, the Susiluola Wolf Cave and some of the finest bubbling springs in Finland. 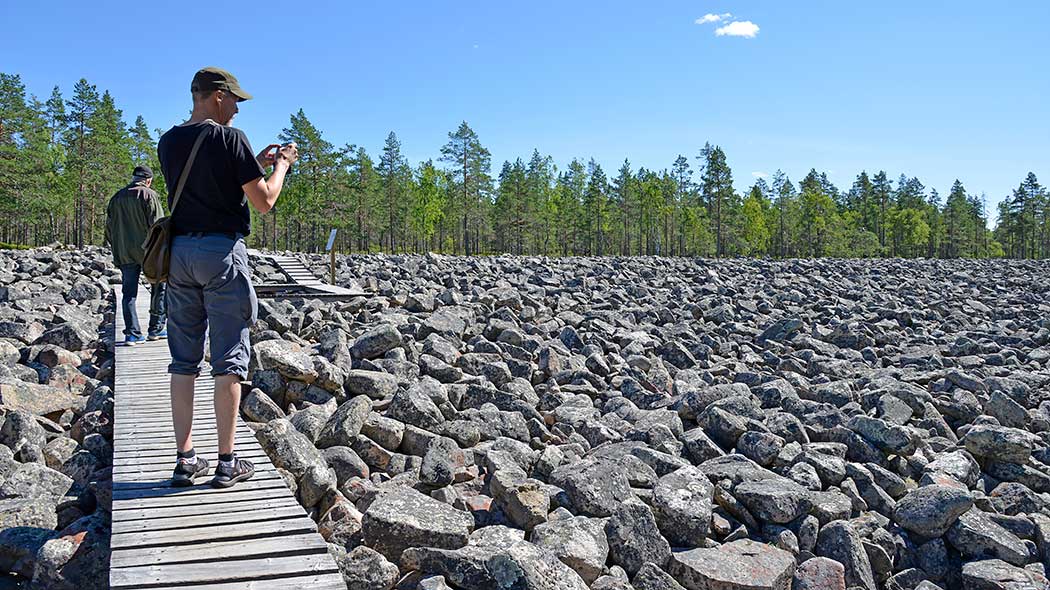 "Preparing to apply for the Geopark status has required extensive development of the area, comprehensive cooperation, investments and inventories, making choices and long-term commitment to the continuous development and maintenance of the Geopark in the future", says Terttu Hermansson, the Executive Manager of Lauhanvuori-Hämeenkangas Geopark ry. "The Geopark is the result of joint efforts in the region, and we are grateful for the extensive work that people have done in the region and for their commitment to the joint development of Geopark."

Led by Metsähallitus, these efforts have included creating hiking services at geosites and producing guidance materials. Municipalities have also developed the Geopark area and Geopark's activities through joint projects. Geopark is not a protected area, but a tool used to develop a geologically valuable area and its vitality and to highlight the valuable geology, nature and culture in the area.

Most of the geosites are located in areas owned by Metsähallitus which means that Geopark relies on Metsähallitus' systems, customer safety work and nature conservation practices. "Metsähallitus' existing services, resources and support have facilitated the Geopark preparation process and had a positive impact on obtaining the status", says Hermansson. In addition to the resources, the area received praise for good cooperation and networking for mutual benefit, for the Geopark environmental education in schools, and for Geopark's visibility in different ways in the terrain, in printed materials and virtually.

The UNESCO Global Geopark brand is a guarantee of quality for tourists and increases international tourism in the region. According to Metsähallitus' calculations, the number of visits to the national parks in the Lauhanvuori-Hämeenkangas Geopark area has already increased a lot during the preparations in the last three years: by over 20% in Lauhanvuori and up to 65% in Kauhanevalla-Pohjankangas. In addition to improved Geopark visibility and hiking services, the increased popularity of nature tourism has also helped boost visitor numbers at the sites.

The most popular attractions in the Geopark area are Kivijata and Spitaalijärvi in Lauhanvuori National Park, Kauhaneva and Katikankanjoni in Kauhaneva-Pohjankangas National Park and the springs in Hämeenkangas. The wide range of tourism services in the area has been compiled on the Lhgeopark.fi website.

The UNESCO Global Geopark status opens up more opportunities for international cooperation in all sectors. The task of the Geoparks is to help each other and to share good practices and innovations with others. Annually organised joint conferences are great places for learning.

Other Geopark areas are also being prepared in Finland: Lake Saimaa, Salpausselkä eskers and ridges and Lake Kraatterijärvi. Both Finland's UNESCO Global Geoparks and Geopark project areas are an interesting tourism destination also for international tourists. The aim is to develop the joint visibility and influence of the Geopark network in Finland.

What is a UNESCO Global Geopark?